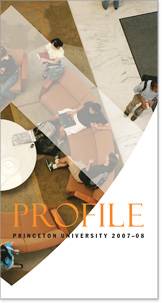 The University's "Profile" publication is designed to answer the most frequently asked questions about the University and to highlight some of the diverse resources available on campus. To view the Profile online, visit www.princeton.edu/profile. Copies of the Profile are available for purchase at cost by contacting the Office of Communications at (609) 258-3601. Cover photo of a lounge in Robertson Hall by Denise Applewhite; design by Megan Peterson

The latest edition of the University's "Profile" publication is now available in print and online, answering the most frequently asked questions about Princeton and providing audiences across the country and the world with a snapshot of the diverse resources available to members of the campus community.

As stated in the Profile's updated introduction, "About Princeton University":

"The University provides its students with academic, extracurricular and other resources -- in a residential community committed to diversity in its student body, faculty and staff -- that help them achieve at the highest levels and prepare them for positions of leadership and lives of service in many fields of human endeavor."

According to the publication:

As noted in the Profile:

"As a research university, Princeton seeks to achieve the highest levels of distinction in the discovery and transmission of knowledge and understanding. At the same time, Princeton is distinctive among research universities in its commitment to undergraduate teaching. Interdisciplinary work is vital to Princeton and is reflected in a full spectrum of academic programs, including such new initiatives as the University Center for the Creative and Performing Arts, the Center for African American Studies, and the Princeton Neuroscience Institute."

To view the Profile online, visit www.princeton.edu/profile. Copies of the Profile are available for purchase at cost by contacting the Office of Communications at (609) 258-3601.