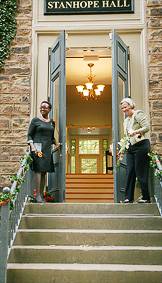 Valerie Smith, director of the Center for African American Studies (left), and President Shirley M. Tilghman opened the doors to Stanhope Hall at the conclusion of a dedication ceremony for the center on Tuesday, Oct. 2. The ceremony was followed by an open house, during which the center unveiled its new home on the University's front campus.

At left: Stanhope, erected in 1803, has undergone a complete renovation that has transformed the building into a light-filled space that reflects many historical details of its time period. 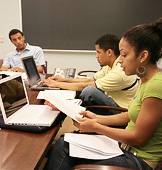 The center plans to expand its offerings by creating new freshman seminars and introductory and advanced courses, as well as collaborations with other interdisciplinary fields and disciplines in the humanities, the fine arts and the social and biological sciences.   Below left: Angel Harris, one of three new faculty members this year, joined Carla Hailey Penn, center manager, at the open house. In addition to expanding its faculty, the center is hosting visiting professors and launching a postdoctoral fellows program. 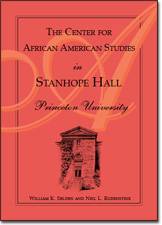 Download a copy of "The Center for African American Studies in Stanhope Hall," (.pdf) a book by William Selden and Neil Rudenstine produced by the Office of Communications.

View a video about the Center for African American Studies.   Below left: Joshua Guild, assistant professor of history and African American studies, is leading a class on "The Civil Rights Movement" in a seminar room in Stanhope Hall this semester. 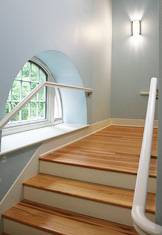 The building's restored interior features an abundance of natural light, simple wood trim and paint color palettes similar to the original architect's work from the period.   Below left: Center Director Valerie Smith (right) greeted Henry Drewry, a member of the center's advisory council and former director of the University's Program in Teacher Preparation, and his wife, Annette Liberson.   Bottom left: "Our location in the center of campus makes visible the importance of research and teaching about race to a liberal arts education," said Center Director Valerie Smith, "and announces the University's commitment to African American studies as a field of study to the campus and to the world outside."

The Center for African American Studies this week unveiled its new home in Stanhope Hall, which has undergone a complete renovation that has transformed the 204-year-old building into a light-filled space that reflects many historical details of its time period.

"You sense the generations of history in the building," said Valerie Smith, the director of the center, which was launched in September 2006 to serve as a model for teaching and research on race in America. "Our location in the center of campus makes visible the importance of research and teaching about race to a liberal arts education, and announces the University's commitment to African American studies as a field of study to the campus and to the world outside." 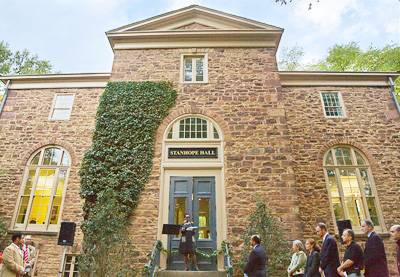 The prominence of the center's location on the front campus also means that it will be a draw for faculty, students, staff and members of the public, she said. "We want people to be drawn to this attractive destination," said Smith, who also is the Woodrow Wilson Professor of Literature in the English department. "Once they're here, we hope they'll be open to the flow of ideas. And faculty, students and visiting scholars who research and teach about issues of race now have a gathering space for intellectual exchange."

The move to Stanhope coincides with the center's expansion of its faculty and its programs. The center is welcoming three new faculty members, including Wallace Best, a leading scholar of African American religious history who has been appointed a professor of religion and African American studies. He has been a professor at the University of Virginia and Harvard Divinity School.

"There are many reasons why I was drawn to Princeton from Harvard, but the three principal ones are its legendary robust collegiality, its true commitment to the highest ideals in the academy and the new Center for African American Studies," Best said. "I believe the center to be one of the most significant developments in African American studies in recent years and that it will be the focal point in the discipline for many years to come."

A scholar of African American women's history, Hunter came to Princeton from Carnegie Mellon University, where she had been an associate professor and had served as the associate director of the Center for African American Urban Studies and the Economy. Harris, who studies public policy analysis, race and ethnicity, previously was an assistant professor at the University of Texas-Austin and a research fellow at the University of Michigan.

In addition, the center's first distinguished visiting professor arrived this fall. Imani Perry, a professor at the Rutgers University School of Law, specializes in cultural studies and law and society. The center also is launching a postdoctoral fellows program which, starting next fall, will bring junior scholars who have held a Ph.D. for fewer than three years to campus for one year to teach, pursue their research and take part in the intellectual life of the center.

The center plans to expand its offerings by creating new freshman seminars and introductory and advanced courses, as well as collaborations with other interdisciplinary fields and disciplines in the humanities, the fine arts and the social and biological sciences. The center's predecessor, the Program in African American Studies, was established by the University in 1969 and was located in Dickinson Hall.

The renovation of Stanhope was conducted to reflect the original historical period of the building and to open up the interior to allow for as much natural light as possible. Stanhope was erected in 1803 with the United States' first professional architect, Benjamin Henry Latrobe, said to have participated in the design. In 2004, the University brought in the Chicago-based architectural firm Hammond Beeby Rupert Ainge, which specializes in historical preservation and renovation, for the project. The firm was not able to find the original plans for the building's interior, so the renovation was not a re-creation of how the building once looked. The architect's goal was to match the original spirit and design intent of Latrobe.

The sandstone exterior walls were left intact, but the inside was completely gutted. The dramatic arched windows were restored, with the original glass retained wherever possible.

"The architects gave Stanhope a sense of openness with an abundance of natural light," said Tim Haas, who was the University's project manager for the renovation. Those entering the building from the Nassau Hall side are greeted by a set of grand wooden stairs and a view all the way through to the restored windows in the back of the building. "There's now a symmetry in the building, which is likely more in keeping with how Latrobe designed it," Haas said.

Stanhope now has two seminar rooms and 10 offices for faculty members on its three floors. The first-floor seminar room is furnished with American colonial tables and chairs, typical of the turn of the 19th century. According to Bill Mahalko, the project architect/manager from Hammond Beeby Rupert Ainge, the firm looked at other Latrobe buildings that would have been contemporary with Stanhope and chose simple wood trim details and paint color palettes similar to Latrobe's other work in that period. Tinted storm windows were installed inside to reduce energy costs. An elevator and a wheelchair-accessible ramp also were built. On Oct. 2 the center held an open house for members of the University community to visit its new home.

In the next few years, the center's primary focus will be establishing a means for students to major in African American studies, recruiting new faculty and developing new programs and collaborations.

"We want to give students the opportunity to work at the cutting edge of the study of race, not only to change ideas about race and racism but also to craft solutions to the persistent problems of racism and inequality," Smith said. "As we expand our offerings, we'll be looking for support from individuals, institutions and foundations that share Princeton's commitment to the idea that African American studies is central to a liberal arts education."