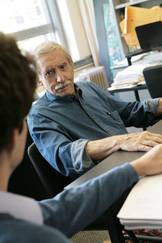 Legendary playwright Edward Albee is spending time on campus this semester as the first recipient of the Princeton University/McCarter Theatre Playwriting Fellowship. Albee has given students in a course in the Program in Theater and Dance an in-depth look at the preparations for the world premiere of his new play, "Me, Myself and I," which opens Jan. 11 at the Berlind Theatre.

Below left: From left, Albee visited with students including freshman Kate Siegel and sophomore Jac Mullen, who are studying his work in "Albee on Albee," the course in the Program in Theater and Dance.

The world premiere of "Me, Myself and I," Edward Albee's newest play, opens Friday, Jan. 11, at the Berlind Theatre and runs through Sunday, Feb. 17. Directed by Emily Mann and starring Tyne Daly, the play tells the story of identical twin brothers, both named Otto, who are mired in sibling rivalry. For ticket information, call (609) 258-2787 or visit the McCarter website.

Eight Princeton undergraduates are spending the fall semester examining the plays of theater legend Edward Albee with a guest lecturer who is uniquely qualified to provide insights into the award-winning writer: Albee himself.

The students are getting a once-in-a-lifetime opportunity to listen to, laugh with and learn from one of the country's leading playwrights in "Albee on Albee," a course in the Program in Theater and Dance covering Albee's body of work, which spans five decades.

"We're getting inside his head," said Kelvin Dinkins, a junior who is an aspiring playwright. "It's eye-opening."

Albee, who has won three Tony Awards and three Pulitzer Prizes, is on campus as the first recipient of the Princeton University/McCarter Theatre Playwriting Fellowship, funded by the Ford Foundation. In addition to talking to Albee about past hits such as "Who's Afraid of Virginia Woolf" and "A Delicate Balance," the students in the class will get a front-row seat to the creative process involved in preparing for the world premiere of Albee's new play, "Me, Myself and I," which is opening at the Berlind Theatre on Jan. 11. They accompanied Albee to the play's first read-through on Dec. 14, and are sitting in on rehearsals and meeting with members of the cast and crew.

"The students are getting a sense of what it is to have a life in the theater," said course instructor Michael Cadden, the director of the Program in Theater and Dance, which is part of the Lewis Center for the Arts. "Mr. Albee is a world-class playwright, so it's quite extraordinary to have him here. And he's about to celebrate his 80th birthday, so he has a long career to talk about."

Albee sat in on three sessions of the seminar this fall. Gathered around a small conference table in Cadden's office — which is decorated with theater posters and photos of actors — students peppered Albee with questions about how he chooses the names of characters and whether famous actors have to audition for his plays.

During his first visit to the class in September, Albee spent a few minutes getting a sense of the interests and theater experience of each student (eight are undergraduates and one is a visiting Fulbright scholar from Taiwan). Then he recalled a conversation he'd had with Thornton Wilder a half-century ago. After Albee gave Wilder some of his poems to read, Wilder asked him, "Have you thought about playwriting?" Albee credited that conversation with launching his life in the theater.

When Albee led the three-hour class in October, he lamented that playwrights today are often pressured to make changes to their plays in an effort to please critics or win an audience.

Will Ellerbe, a senior majoring in English and pursuing a certificate in theater and dance, said he has enjoyed the opportunity to meet with Albee. "He's irreverent," Ellerbe said. When Ellerbe asked Albee if he dreaded his plays going into the public domain when the copyrights expire, the playwright replied, "I can't worry about stuff I won't be around for."

Albee described for the students what he's thinking when he sits in a darkened theater waiting for the first act to begin.

"Two things have to happen every time you experience a play," Albee said. "You must bring all your knowledge of theater, and at the same time, you must rid yourself completely of that and ignore all the theater you've experienced. Anytime I write a play, I write the first play I've ever written."

The students began the class by reading the 1959 play "The Zoo Story," the first of Albee's plays to gain national attention. Over the course of the semester they read two dozen more plays, Mel Gussow's biography "Edward Albee: A Singular Journey" and selections from "Stretching My Mind: The Collected Essays of Edward Albee." They also are scheduled to see three Albee plays currently being performed in New York City. Class assignments include an essay on one of his early plays and a review of "Me, Myself and I."

Albee described for the students how he begins writing — with an open mind and no prejudgments about where the drama is headed.

"I don't want to intrude too much on whatever my creativity is deciding," he said. "Many times the characters take over and say what they want to say."

And Albee, who has written more than two dozen plays in his 50-year career, doesn't like to offer interpretations of his plays, either.

"I hate to say what a play is about. And I'm very tired of talking about metaphor," Albee said. Referring to his 2000 play "The Goat or Who is Sylvia?" in which a man falls in love with a goat named Sylvia, he quipped, "People say to me, 'Now the goat is a metaphor,' and I say, 'No, it's a real goat.'"

"He's very upfront," said Dinkins, who is an English major concentrating in theater and dance. "He has commentary about actors and commentary about other playwrights. We're privileged to have him in the room with us. It's something I haven't experienced before."

Albee said he is having fun answering questions from the students and discussing his work with them. He accepted Princeton's invitation because he wants to pass on his insights to a younger generation. "I think it's a responsibility to share what you know," he said.

"He's very open and honest," said freshman Mara Nelson-Greenberg, an aspiring playwright. "He offers his opinions on pretty much anything, and he's given me a lot of insight into his own work and playwriting in general. This is a rare opportunity, and so far I've been extremely happy to be a part of it."

One subject about which Albee expressed strong opinions was collaboration in the theater, an issue with which every playwright has to come to terms, said Cadden. "As a playwright, other people — directors, actors, designers — mediate your work. An audience comes to the work most often via a whole series of collaborators. Other playwrights give you the sense that they're so terribly appreciative of the collaborative process." Albee, by contrast, has a decidedly less benevolent take on the subject.

"There are directors who think they have a better idea than the playwright, actors who want to do it slightly differently than it was written — it ends up being somebody else's opinion of the play," Albee told the students. "That's why I involve myself so much in choosing the right director and the right actors and designers, so nobody will distort my intentions. I'm nosy. I involve myself in all aspects of it — I talk to the costume designer, the lighting designer, everyone."

His hands-on approach means that he will be spending a lot of time at the McCarter Theatre in anticipation of the premiere of his latest work, a funny and moving play about identical twin brothers that takes sibling rivalry to existential heights. The play is being directed by McCarter's artistic director, Emily Mann, and stars actress Tyne Daly.

The students told Albee they were laughing out loud while reading the script for "Me, Myself and I." They asked Albee how he finds the right actors ("I look for innate talent and the ability to handle language") and whether he did research about twins before writing the play ("I met triplets who finished each other's sentences").

"It was really incredible to be able to talk to the man who wrote such an interesting and powerful play," Ellerbe said. "Even though he's 79, Albee is witty, rascally and surprisingly hip. This past summer I read a number of plays by older playwrights, and they were by and large nostalgic re-creations of earlier times in their lives. Throughout his career, Albee has written on the cutting edge, and his latest play, ‘Me, Myself and I,' continues in that vein."

"I break every rule in this play," Albee told the students. "Critics who like the rules will hate it. I'm much more interested in how an intelligent audience will respond."