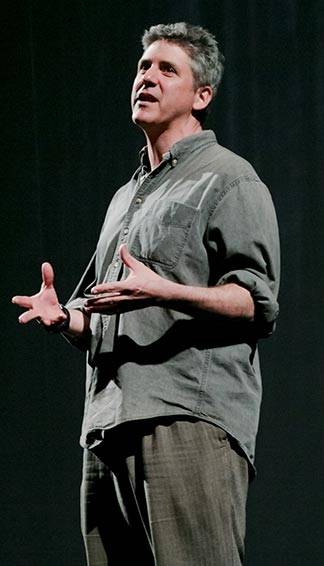 Tim Vasen, a lecturer in theater and the Lewis Center for the Arts, and director of the Program in Theater at Princeton, died Dec. 28 following an accident in Brooklyn, New York. He was 51.

"Some of us have lost a very dear friend, one of the finest human beings we have known," said Michael Cadden, chair of the Lewis Center and a senior lecturer in theater. "All of us have lost one of the world’s finest teachers of theater — an intellectually voracious, physically vital and imaginatively daring practitioner of the art form he cherished above all others."

Vasen directed plays and taught classes at Princeton part-time starting in 1993; he joined the faculty in 2003 and in 2012 became director of the Program in Theater.

"I was impressed from the first by Tim's passionate commitment to working with the students as artistic collaborators on the kind of work that demanded their full investment," Cadden said. "Tim always insisted theater was first and foremost about people in a room together, figuring something out. Initially, the artists; eventually to be joined by an audience."

Vasen returned to Princeton in 2003, when he began to see what educational theater had to offer that could not be easily found in the professional world. Vasen's university directing credits include many classical plays and classic works — Aristophanes, Shakespeare, Brecht, Chekhov, Ibsen, Synge, Beckett and Williams — as well as new works by emerging student playwrights at Princeton, Yale School of Drama and New York University's Tisch School of the Arts. A number of his former Princeton students asked him to direct their postgraduate work including "Three Plays by Rebecca Foresman" by Foresman, a 2010 alumna, at Dixon Place in New York City in 2013, and "Wanderland" by Veronica Siverd, also a member of the Class of 2010, at Little Times Square Theater and Festival Tour in 2012.

"Tim did a marvelous job directing the Program in Theater, reaching out to colleagues across the University to explore artistic-scholarly collaborations," Cadden said. "Tim always argued that university arts programs are in a particularly good position to benefit from the intellectual and artistic resources of their surrounding community."

Vasen's courses were often crosslisted with other disciplines, including Slavic languages and literatures, music, and Hellenic studies. For example, in collaboration with Cadden and the Seeger Center for Hellenic Studies, Vasen created the recurring course "Re: Staging the Greeks," which has been a conduit between Princeton students and Greek theater artists since 2008. In summer 2012, he and Cadden, in conjunction with the Princeton Institute for International and Regional Studies, adapted the course for a Global Seminar to Greece, enabling students to visit and perform plays from the ancient Greek canon on the very stages used by their theatrical predecessors.

Vasen became a recognized authority among theater scholars and practitioners for directing world premieres of unproduced Soviet-era projects, often in collaboration with fellow artists and scholars including Princeton’s Caryl Emerson, the A. Watson Armour, III, University Professor of Slavic Languages and Literatures, Emeritus, and professor of comparative literature, emeritus; Simon Morrison, professor of music; Rebecca Lazier, senior lecturer in dance in the Lewis Center for the Arts; and Michael Pratt, conductor of the Princeton University Orchestra and director of the Program in Musical Performance.

These productions, featuring student performers, included an unfinished 1930s collaboration between Prokofiev and Meyerhold on Pushkin's "Boris Godunov" in 2007 and an unfinished 1930s collaboration between Prokofiev and Sigizmund Krzhiszanovsk on Pushkin's "Eugene Onegin" in 2012. In 2013, at the prompting of Pratt, Vasen also directed "Der Bourgeois Bigwig," a new translation and adaptation by James Magruder of the Molière comedy "Le Bourgeois Gentilhomme" as adapted by Hugo von Hofmannsthal in collaboration with Richard Strauss.

"The shock and loss of Tim Vasen is hard to process," said Emerson. The "Boris Godunov" production began a series of Russia-centered collaborations with the Program in Theater and Department of Music "that put our tiny Slavic department on the map of Princeton's performing arts landscape," she said.

Vasen went on to co-teach four courses in Russian literature and drama in the Department of Slavic Languages and Literatures, "helping the traditional library-bound academic to 'teach and learn with the whole body,'" Emerson said. "His enthusiasm for Russian culture, from little-known prose writers like Krzhizhanovsky up through this year's fall show, Bulgakov's 'Zoyka’s Apartment,' was an inspiration. To a literature that is, as a rule, deep, mournful or manic, Tim consistently brought high spirits, common sense and the most ingenious embodiment."

"Tim was everything you could want in a teacher, a mentor and a colleague," said Robert Sandberg, a lecturer English, theater and the Lewis Center for the Arts. "He was warm, open, caring, straightforward, passionate and whip-smart. There was no one more direct and honest; you always knew where you stood with Tim.

"He wanted the very best for the students," Sandberg said. "He urged them to challenge themselves, to dream big, and he supported them as they journeyed on their artistic paths. He was the best audience anyone could wish for: his energy, enthusiasm and that wonderful laugh filled up the whole house, affirming the act of theater and embracing the vitality of life."

"Tim was a great friend and colleague, a truly gifted director, a phenomenal teacher and generous mentor," said Florent Masse, a senior lecturer in the Department of French and Italian. "He will be terribly missed by everyone he inspired, mentored and coached. I'll always cherish the opportunities I had to collaborate with Tim, learning from his work and vision for the development of the arts on campus."

Masse remembered traveling to France on two occasions with Vasen and students. "As recently as last summer, we were celebrating an exciting day of theater at the Avignon Festival around a delicious meal Tim had graciously prepared for us in his apartment. It was a memorable night of dynamic and passionate exchanges on theater traditions, cultures and the arts," Masse said.

As director of the Program in Theater, Vasen also helped to bring renowned theater artists to the University as faculty including Tony Award-winning directors John Doyle and John Rando, designers Jane Cox and Ricardo Hernandez, and scholars such as Brian Herrera (recent winner of the George Jean Nathan Award for Dramatic Criticism) and guest artists such as the contemporary dance and theater ensemble Witness Relocation. Vasen also reviewed arts supplements from hundreds of high school students applying for admission to Princeton, often reaching out to promising young prospective students to acquaint them with the University's academic programs in the arts.

Darryl Waskow, the Lewis Center's producer in theater and dance, said, "Tim's strength was in how he got the best work out of the students, faculty, guests and staff. He grew the program in many ways. But while the expansion of our programming was a success, those who worked most closely with Tim saw that he did his best work one-on-one with the students. What I'll always remember about Tim was his work on small-scale, student projects, where he shined in guiding students in developing their work," Waskow said.

Vasen often stayed in contact with former students and was instrumental in starting the Princeton Arts Alumni group with Pilar Castro Kiltz, a member of the Class of 2010. "Through to this day, I navigate my work as a director, choreographer and playwright with inspiration and lessons from Tim as my guide," said Castro Kiltz. "Without Tim, the Princeton Arts Alumni would not exist; Tim's dedication to developing and supporting us as artists endured well after we graduated. His spirit of exploration, curiosity and enthusiasm will continue to resonate and multiply as those of us who were lucky to count him as teacher, mentor and friend go forward ever influenced by him."

"I knew Tim Vasen for 10 years,” said Lileana Blain-Cruz, a freelance director and a member of Princeton's Class of 2006. "At Princeton, he was my thesis adviser on my production of Shange's 'for colored girls…' and continued to be an incredible mentor and adviser to me at the Yale School of Drama, particularly on my thesis production, Stein's 'Doctor Faustus Lights the Lights.'

"Tim was a force of energy, ideas, imagination and love for the human spirit," Blain-Cruz said, "and he inspired that same joie de vivre in his students in me. I am indebted to him for his insights; for encouraging me in those dark hours of creative angst; for talking about the Greeks, Thornton Wilder and Gertrude Stein; for giving me an opportunity to direct and teach 'Much Ado About Nothing' at Princeton as the fall show in 2013; and for encouraging us to be fearless and joyful in the journey of making art," she said.

"Once he committed full-time to Princeton," Cadden said, "Tim's principal professional credit beyond Princeton was his work with final year [MFA] actors at the Yale School of Drama, where he prepared the actors for the scene work they would perform as an ensemble for agents and casting directors in New York and Los Angeles. He also advised [MFA] directors on their choice of a final thesis project and the ways in which they might tackle it. Needless to say, his position at Yale spoke to the faith the country's premier theatrical training ground had in the quality of his work with his student charges."

Vasen is survived by his wife Leslie Brauman; his children, Sam and Rosie; his mother, Sally Vasen Alter of Culver City, California; his father Richard Vasen of Houston, Texas; and his brother, Dan Vasen of Corbett, Oregon. 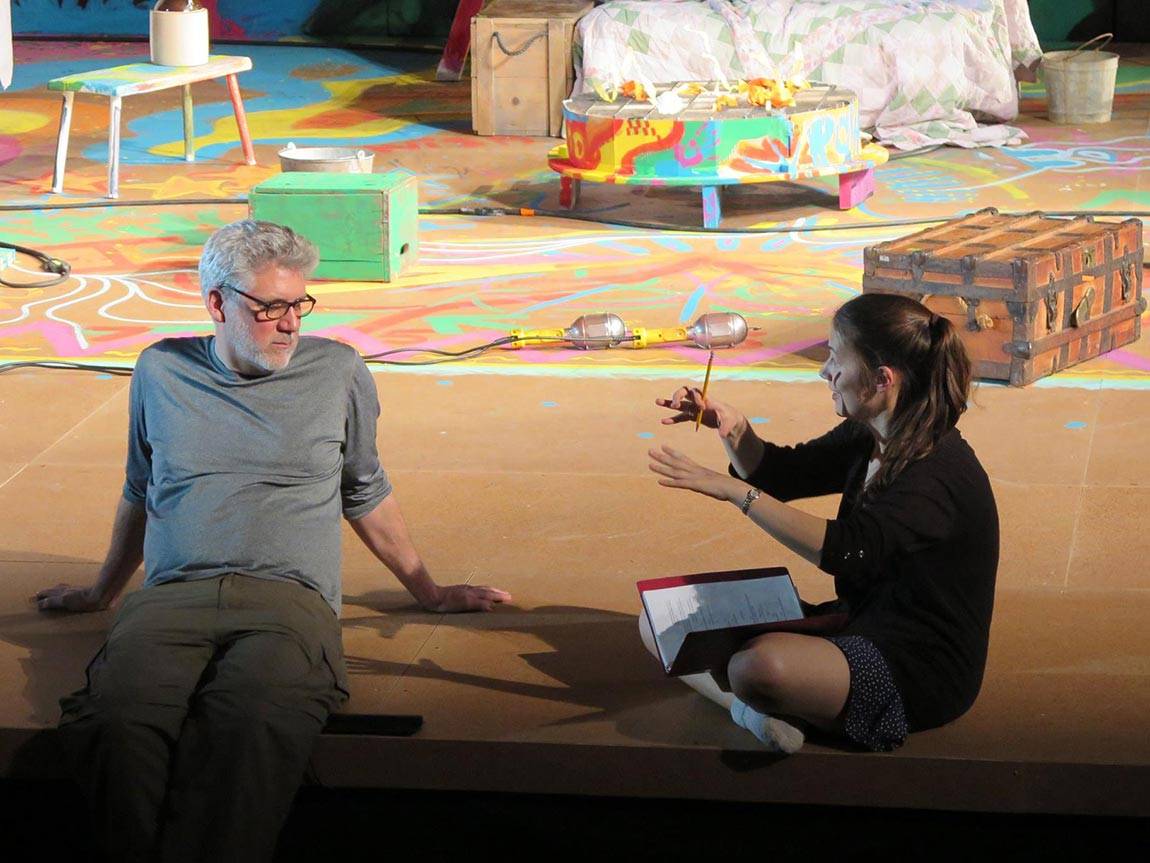 Director Vasen and stage manager Cat Andre, a junior, consult before a dress rehearsal of "Eyes Up High in the Redwood Tree," an original play written by Annika Bennett, a member of the Class of 2015, for her senior thesis certificate, produced in April 2015. (Photo by Warren S. Rieutort-Louis; set design by Anya Klepikov, lecturer in theater and the Lewis Center for the Arts)