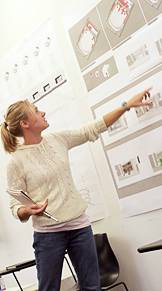 Sheena Garcia, a graduate student in architecture, reviews set designs for “Boris Godunov,” a classic Russian play that will be performed in April at the Berlind Theatre. In the first collaboration between the School of Architecture and a campus theatrical production, students in a seminar led by Jesse Reiser, associate professor of architecture, are designing sets for the "Godunov" world premiere. 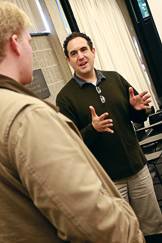 Reiser (right), speaking with graduate student Grant Alford, is leading the seminar in partnership with stage director Tim Vasen, with contributions by others involved in various aspects of the production.

At left: Teams of students are devising various methods to keep the set in motion. From left, students Brandon Horn and Anne Romme and director Vasen examine a design of three-sided panels that can be manually rotated by the actors on stage to display different images.

Below left: As participants in the seminar discuss the "Godunov" set, a sketchbook offers a view of one student's concepts for how to help bring the play to life.

Graduate students in the School of Architecture will see their work in a new seminar come to life on the Berlind Theatre stage this spring.

In the first collaboration between the architecture school and a campus theatrical production, students are designing sets for the April 12-14 world premiere of “Boris Godunov,” a classic 19th-century Russian play by Alexander Pushkin. Jesse Reiser, an associate professor of architecture, is leading the seminar this fall in partnership with stage director Tim Vasen, with contributions by others involved in various aspects of the production.

“I think it’s really organic,” Reiser said of the collaboration. “We each have our own areas of expertise, and the theater is a fantastic vehicle for bringing these things together. We seem to be attracting more and more people to watch the process, which is also really interesting.”

The 15 graduate students began the semester by developing concepts for the entire set, and have since been working in groups of three on more detailed models for particular scenes. Ultimately, Reiser and Vasen will choose the best designs — in some cases, combining elements of work done by different teams — to be constructed in the spring with assistance from the students.

“I’ve never worked like this before — it’s unique for all of us,” said Vasen, a lecturer in the Program in Theater and Dance. “Usually when a play is done there is a single set designer, but when we decided to open this up to involve the architecture school they wanted to give an opportunity to as many students as possible.

“One of the things that has been really helpful is that, being architects, they are always looking for really new and unexpected ways to get from A to B. In some cases, they’ve been reinventing the theater — some of that is a little impractical, but some of that is really exciting,” Vasen said.

Reiser said, “The students are looking at different ways of getting the set to move, to flutter and to fluctuate. They’re dealing with different ways of creating a terrain, a theatrical surface for people to play on, and they’re looking in interesting ways at how to work with the theater in a way that would be pretty unorthodox.”

For example, one team of students — Laila Seewang, Anne Romme and Brandon Horn — is working on designs of three-sided panels that can be manually rotated by the actors on stage to display different images. “It is very exciting to take on a project for one semester and see it realized,” said Seewang, who added that she is particularly looking forward to assisting with construction of the set this spring.

In addition to discussing their designs, students have learned about various aspects of the production ranging from the history of the play to the musical score to budgetary considerations. Visitors to the class have included: project directors Simon Morrison, associate professor of music, and Caryl Emerson, professor of Slavic languages and literatures; technical coordinator Darryl Waskow, managing director in theater and dance; Catherine Cann, costume shop manager in theater and dance; Paula Matthews, music librarian and curator of an exhibition that will accompany the production; and Michael Pratt, conductor of the University Orchestra. Members of the project team often sit in on the seminars to observe and comment on the design process.

“All of these people influence the way in which I consider the set and continually re-interpret things about the designs that I tend to take for granted,” Seewang said.

Pushkin’s historical play, written in 1825, is set just before the “Time of Troubles,” the interregnum and civil war between Russia’s two imperial dynasties. It dramatizes Godunov’s rise to power in late 16th-century Russia, his increasingly tyrannical reign as czar from 1598 to 1605 and the challenge to his reign by Dmitry the Pretender, who claimed to be a son of Ivan the Terrible. For political as well as dramatic reasons, Pushkin’s play was approved for performance only in 1866 and then adapted into an opera by composer Modest Musorgsky between 1869 and 1874.

The Princeton production is based on an ill-fated stage version crafted by innovative director Vsevolod Meyerhold, with choral and orchestral music composed in 1936 by Sergei Prokofiev for Meyerhold’s version, intended for the centennial of Pushkin’s death. This was Meyerhold’s second attempt to stage “Godunov” (the first was in 1924-25), but in the increasingly threatening climate of the Stalin regime, Meyerhold abandoned this production as well. He was arrested on charges of treason in 1939 and shot a year later. Prokofiev’s score has never been used for a live performance of Pushkin’s play, nor has the full text of the play ever received a first-class staging in English.

The effort to recreate Meyerhold’s vision presented an ideal opportunity for collaboration with the architecture school, according to the project directors. The partnership was encouraged by Dean Stan Allen, who chaired President Tilghman’s task force that led to the creation of the University Center for the Creative and Performing Arts earlier this year.

“Meyerhold tended to work on his theatrical projects with architects, so this seemed like a natural thing to try to do,” Morrison said. “Relying on primary source materials, we’re trying to realize at least something of Meyerhold’s politically attuned intentions for Prokofiev’s score and, in its uncensored guise, Pushkin’s drama.”

Emerson added, “Pushkin intended his innovative drama for the stage, but the imperial censorship did not approve it for performance during his lifetime. The Boris Godunov story first achieved world fame as an opera. We see this Princeton collaborative project as an act of stripping Pushkin’s original, lean, fast-paced play of all those later operatic components and at the same time realizing something that Pushkin didn’t really have the technique, technology or political freedom to realize. This was also Meyerhold’s dream.”

Grant Alford, a student in the seminar, said, “Given that the play was never performed, and in light of the circumstances under which it was shut down, it is inspirational for us to try to revive it.”

Reiser stressed that while students are trying to be true to Meyerhold’s vision for the production, their design concepts must incorporate modern realities.

“There are issues we have to face in the present day and at Princeton that weren’t faced by Meyerhold in the ’30s,” he said. “‘Boris Godunov’ would have been known by the educated intelligentsia. That gave him a lot of liberty to produce a much more abstract set, because it wouldn’t be necessary to make too many historical references. We can’t assume that. We have to balance an historical presentation to contextualize the play, but at the same time not turn it into something that’s too heavily invested in historical representation.”

Reiser added, “What is really exciting here is that we and the students are exploring Meyerhold’s concept of a biomechanical theatre, which features energetic movement among the actors with certain scenes overlapping and the set in constant motion. We’re trying to develop a model for this concept in the 21st century. I hope that Meyerhold, if he were alive today, would be surprised and happy at the consequences.”

Vasen said the process of evaluating students’ set designs is helping him shape his own vision for the Princeton production.

“I don’t think this process could work for every play, but for this project — both the nature of the play and the project itself, which is about encompassing a lot of different points of view — it’s actually working really well,” Vasen said. “I was nervous that it was going to result in chaos, but I’ve come to believe that organized chaos is exactly what the project demands.”

For more information about the Godunov project, visit its website.