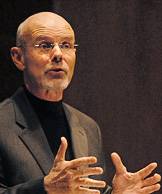 Philip Pettit, the Laurance S. Rockefeller University Professor of Politics and Human Values, studies the intersections of liberty and government. He recently had an opportunity to examine how well his theories can be put into practice when Spanish Prime Minister José Luis Zapatero asked Pettit to give an assessment of how well his government was doing. Here, Pettit speaks at a November event to launch "Common Minds: Themes From the Philosophy of Philip Pettit," a volume of critical essays evaluating his work as a whole published last fall by Oxford University Press. (Photo: David Hunsinger) 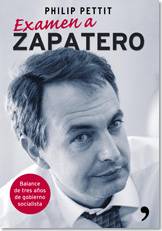 Pettit assessed Zapatero's legislative program in light of his theories about freedom. For highlights of the report, see the Jan. 14 issue of the Princeton Weekly Bulletin. Pettit then gave the Spanish prime minister 20 follow-up questions, and the responses appear in a book, "Examen a Zapatero," published in Spain in January.     At left: Pettit met with Zapatero (left) this past summer after producing the assessment. Pettit recently was named to an international advisory committee for Zapatero leading up to Spain's national election in March. (Photo: Victoria McGeer)

In keeping a long-held promise to a man who would become the head of Spain's government, the Princeton political philosopher Philip Pettit has found the rare opportunity to examine how well his theories can be put into practice.

This past summer, Pettit delivered on his pledge to come back to Spain at least six months before its next general election to give an assessment directly to the Spanish prime minister, José Luis Zapatero, of how well his government was doing.

Now, with the election set for March 2008, Pettit is still very much in demand. On Nov. 13, the renowned scholar was named to the committee of 14 international experts who will advise Zapatero on his party manifesto in the run-up to the election. The Spanish newspaper El País is calling this committee Zapatero's "dream team."

The dialogue between Pettit and Zapatero started in 2002 with a surprise invitation. Pettit was asked by Zapatero, the then newly elected leader of the Spanish Socialist Party, to attend a party conference in Spain to discuss some of the guidelines for government Pettit had outlined in his 1997 book "Republicanism." Pettit believes that his book resonated with Zapatero because the Spanish leader wanted to "reconstruct the vision of what social democracy stood for around general guiding principles."

But Pettit had an academic conference in Australia and could not make it to Spain. Then a few months later, immediately after the Madrid bombings in March 2004, Zapatero won the national election in Spain and became prime minister.

Soon after taking power, Zapatero renewed his invitation to Pettit. This time Pettit could accept, and in the summer of 2004 he gave a lecture to a large invited audience in Madrid, with Zapatero seated next to him on the dais. 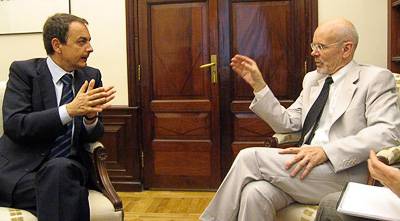 "I said, 'You are going to find it very hard to live up to some of these principles,'" said Pettit. "And Zapatero said he 'absolutely was going to be a politician of principle' and he invited me back to review his government before the next election to see if he had been faithful to the principles of the [republican] tradition."

Investigating the intersections of liberty and government has long been a focus for Pettit, the Laurance S. Rockefeller University Professor of Politics and Human Values, who joined the Princeton faculty in 2002. He teaches in the politics and philosophy departments, and is the director of the graduate Program in Political Philosophy. He also leads the Democracy and Human Values Project in the University Center for Human Values, where he is a member of the executive committee.

Over his more than 30-year career, Pettit's work has extended across political and moral philosophy into areas such as the philosophy of economics and psychology. In 2005, the French-language weekly news magazine Le Nouvel Observateur named Pettit one of the 25 greatest thinkers in the world today, along with his Princeton colleague, Kwame Anthony Appiah.

"What is remarkable about Philip is the range of his interests and activities," said Daniel Garber, chair of Princeton's philosophy department. "I can't think of another figure who has attained the distinction he has across the board."

Professor of Philosophy Michael Smith, who has written several publications with Pettit, said he has made "seminal contributions" across a wide philosophical spectrum. "Philip has the distinctive view that the lessons that we learn when thinking about problems in one area often constitute ready-made solutions to problems that we face in completely different areas," he said. "His signature quality is his ability to bring out the surprising connections between quite different fields of inquiry."

A significant focus of Pettit's work has been reinterpreting the civic republican tradition, which he describes in "Republicanism." In this work, Pettit gives new meaning to the long republican tradition — which is not to be confused with the U.S. Republican Party —  that reaches back through the American Revolution and the English Civil War to the Roman Republic.

In his definition of "freedom," Pettit emphasizes the idea of "non-domination" — a perspective that offers a clear-cut set of principles with practical ways to organize government so that it is responsive and enabling.

"The sort of complaint that everyone understands, it seems to me, is the complaint that they are under someone's thumb: that someone is watching them, looking over their shoulder," Pettit said. "The evil against which government has to defend is essentially the evil of people being stood over by the more powerful, in a way that gives the more powerful control of their lives."

Pettit, a native of Ireland, somewhat jokingly points to his experience in a seminary when he once thought about becoming a Catholic priest as being fuel for his thoughts about freedom and non-domination.

"I remember that what I most hated about being in the seminary was that there was a whole culture that explicitly stated, 'We are going to break your will,'" said Pettit. "But I always thought that to break the will was to break the person."

Pettit's publications, which have been translated into multiple languages, reveal his intellectual breadth. Along with "Republicanism," his books include "The Common Mind"; "Rules, Reasons and Norms"; "The Economy of Esteem" (with Geoffrey Brennan); and "Mind, Morality and Explanation" (with Frank Jackson and Michael Smith). "Made With Words: Hobbes on Language, Mind and Politics," which grew out of a seminar on Thomas Hobbes he taught twice with Garber, has just been published by Princeton University Press.

For Pettit, the task of reviewing Zapatero's government has provided a unique look at how the theories of his works have been applied.

"I did not set out to provide an estimate of how good the policies were, but only to say if these are the policies that fit with the sort of neorepublican image of what government should be doing," he said.

Pettit was asked to assess Zapatero's legislative program in light of his theories about freedom. Far from leading to a set of abstract ideals, Pettit's philosophy aims at the practical, "gas-and-waterworks" aspects of government: That is why he examined the nuts and bolts of Zapatero's program, asking how new laws might help to re-orient the relationship between people and government in the context of the principle of non-domination.

To prepare for his report, Pettit spent considerable time during a leave last year as a senior scholar in ethics at Harvard University studying various materials from Spain, from government documents to newspaper articles. Philipp Koralus, a doctoral student in philosophy at Princeton, served as his research assistant.

Overall, the report Pettit submitted to Zapatero was positive. "I really was very impressed by the Zapatero government," he said.

Pettit's report is not the end of his dialogue with Zapatero. He gave the Spanish prime minister 20 follow-up questions, and the responses appear in a book, "Examen a Zapatero," published in Spain in January. Included in the book is Pettit's review of Zapatero's fidelity to the principles of republicanism. "Zapatero thinks it is very important to put your colors up in public to show where you're going and what your principles are," said Pettit.

In the meantime, Pettit has celebrated a special occasion of his own, in which his own "colors" were "put up in public." On Nov. 29, the University Center for Human Values hosted an event to launch "Common Minds: Themes From the Philosophy of Philip Pettit." Published last fall by Oxford University Press, the book is a volume of critical essays evaluating Pettit's work as a whole. The event included a workshop and featured two main speakers, the philosophers David Braddon-Mitchell and Philip Gerrans, both former doctoral students of Pettit's from Australian National University.

As he gears up for his next phase of work as a member of Zapatero's "dream team," Pettit said, "I'm a philosopher not an adviser," adding in Australian idiom for 'show of support': "but now I'm barracking for Zapatero."