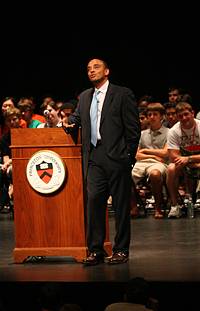 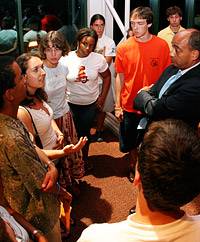 Above: Freshmen took the opportunity to continue their discussion with Appiah following his lecture.

Below left: Members of the class of 2009 packed the Matthews Theatre at the McCarter Theatre Centre for Appiah's address.

Not long after being welcomed to the Princeton campus, members of the class of 2009 were exhorted by one of the world's leading philosophers to look beyond their new surroundings to examine and uphold their obligations to fellow citizens of the world.

"You may or may not like strangers or their ways. But the very essence of morality requires that you should accept that we have a shared responsibility for the human fate," Princeton professor Kwame Anthony Appiah said in delivering the annual Freshman Assembly lecture on Sunday, Sept. 11, in McCarter Theatre.

Appiah's talk, "Challenges to Cosmopolitanism," explored a concept that dates back to the fourth century B.C., when Greek philosophers known as the Cynics coined the term cosmopolitan, meaning "citizen of the cosmos." Their theory signaled "a rejection of the conventional view that every civilized person belonged to a community among communities," he said.

In the cosmopolitan view, people must care for and try to understand others "beyond those with whom we are related by the ties of family or even the more formal ties of a shared citizenship," Appiah said. It is imperative, he added, "that we take seriously the value not just of human life but of particular human lives, which means taking an interest in the practices and beliefs that lend them significance.

"People are different, the cosmopolitan knows, and there is much to learn from our differences. Because there are so many human possibilities worth exploring, we neither expect nor desire that every person or every society should converge on a single mode of life. Whatever our obligations are to others (or theirs to us) they often have the right to go their own way," Appiah said.

"As we'll see, there will be times when these two ideals -- universal concern and respect for legitimate difference -- clash. There's a sense in which cosmopolitanism is the name not of the solution but of the challenge," he said.

Appiah, the Laurance S. Rockefeller University Professor of Philosophy and the University Center for Human Values, specializes in moral and political philosophy, African and African-American studies, and issues of personal and political identity, multiculturalism and nationalism. He is the author of numerous award-winning books, including "The Ethics of Identity" and "Color Conscious: The Political Morality of Race." His next book, "Cosmopolitanism: Ethics in a World of Strangers," will be published in 2006. Last year, the French-language weekly news magazine Le Nouvel Observateur named Appiah one of the 25 greatest thinkers in the world today.

His talk followed the official welcoming of the new students at Opening Exercises earlier in the day. The assembly is intended to give freshmen their first taste of academic life at Princeton. The lecture was followed by small discussion groups, the same format that many of their classes will take.

Noting that it was particularly important to examine these issues on the anniversary of the Sept. 11, 2001, terrorist attacks against the United States, Appiah cited the deadly religious intolerance of fundamentalist Muslims, such as Osama bin Laden and Al Qaeda, and fundamentalist Christians, such as the 1996 Atlanta Olympics bomber Eric Rudolph. While emphasizing that they are in the minority of those who share their faiths, Appiah stressed that their views oppose the cosmopolitan commitment to pluralism.

"Cosmopolitans think that there are many values worth living by and that you cannot live by all of them. So we hope and expect that different people and different societies will embody and experiment with different values, though they have to be values worth living by," he said. "Another aspect of cosmopolitanism is what philosophers call fallibilism. We have the sense that our knowledge is imperfect, provisional, subject to revision in the face of new evidence -- including new evidence from people in other societies."

In addition to addressing theoretical issues, Appiah urged students to apply the tenets of cosmopolitanism to real-world problems. He challenged them to think about the need for increased international aid from wealthy nations, given the poverty and health crises in the Third World. While America has the largest foreign aid budget in the world, its foreign aid as a percentage of gross domestic product is the lowest among affluent nations, he noted.

"Charitable giving in the wake of the tsunami of Christmas 2004 was remarkable and heartening; but 2 million people die each year of malaria; 240,000 a month die of AIDS; and 136,000 [a month] die of diarrhea, most of them children," he said.

In 2002, the United Nations organized a summit on international aid in Monterrey, Mexico, which Appiah called "a truly cosmopolitan conversation on a matter of central cosmopolitan concern."

"It's important that conversations like these continue; it's even more important that they don't just end with conversation," he said. "For if there are people without their basic entitlements -- and there are billions of them -- we know that, collectively, we are not meeting our obligations."

Following Appiah's lecture, freshman Yume Kitasei said she appreciated that he supported his message of tolerance with "concrete details about how we can apply this in the real world."

"He had suggestions for what we should pursue as per Princeton's motto," she said, referring to the University's informal motto of "Princeton in the nation's service and in the service of all nations."

Kitasei added that Appiah's wide-ranging address was an excellent introduction to academics at Princeton. "I thought this was a great lecture," she said, "and it also was good practice for my note-taking."