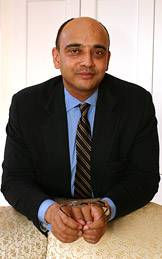 The medal honors those whose work has deepened the nation's understanding of and engagement with the humanities, or helped preserve and expand access to important resources in the humanities. Appiah was among eight individuals presented with the award at a White House ceremony Feb. 13.

The medal also was presented to historian and librarian Robert Darnton, the Shelby Cullom Davis '30 Professor of European History Emeritus, who served on the Princeton faculty from 1968 to 2007 before accepting a position at Harvard University.

"Kwame Anthony Appiah is one of Princeton's most luminous scholars and a true citizen of the world," said President Shirley M. Tilghman. "While his cosmopolitan vision and the moral values that inform it have helped to guide the discourse on our campus, his ideas have a global reach, challenging conventional understandings of identity and loyalty and bridging the divisions that they generate. I am delighted that he is being honored with a National Humanities Medal."

Appiah, who has taught at Princeton since 2002, is the Laurance S. Rockefeller Professor of Philosophy and the University Center for Human Values. He has published widely in philosophy and in African and African American literary and cultural studies.

In the official citation for the award, Appiah was honored as a philosopher "seeking eternal truths in the contemporary world," whose "books and essays within and beyond his academic discipline have shed moral and intellectual light on the individual in an era of globalization and evolving group identities."

Appiah is the author of numerous award-winning books, including, over the last seven years, "The Honor Code: How Moral Revolutions Happen," "Experiments in Ethics," "The Ethics of Identity," and "Cosmopolitanism: Ethics in a World of Strangers," which has been translated into more than a dozen languages. With Henry Louis Gates Jr. he edited "Africana: The Encyclopedia of the African and African American Experience."

He has also published three novels and is the co-author with his mother of an annotated collection of proverbs from Ashanti, Ghana.

Appiah has held a variety of leadership positions, including serving as president of the PEN American Center, from 2009 to this year, and chairing the boards of the American Council of Learned Societies and the American Philosophical Association. In 2010, Appiah received Princeton's Howard T. Behrman Award for Distinguished Achievement in the Humanities.

Appiah has served on editorial boards with a range of journals, including GLQ: A Journal of Lesbian and Gay Studies, Philosophical Review, and Ethnic and Racial Studies. He is the current publisher of the transnational intellectual journal Transition, for which he served as editor for many years.

In addition to Appiah and Darnton, two other winners of this year's National Humanities Medal have Princeton ties: musician and scholar Charles Rosen, who earned his A.B. in 1948 and his Ph.D. in 1951 from the University, and medieval historian Teofilo Ruiz, who received his Ph.D. from Princeton in 1974.

The National Humanities Medal, inaugurated in 1997, is sponsored by the National Endowment of the Humanities. More information on the winners can be found on the endowment's website.