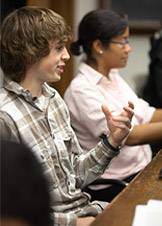 In the freshman seminar "Individuality as an Ideal," Andrew Barnett, seated next to fellow student Gabriella Ravida, kicks off a class discussion with a presentation about ancient Greek philosopher Aristotle's ethics. The seminar is being taught by Kwame Anthony Appiah, the Laurance S. Rockefeller University Professor of Philosophy and the University Center for Human Values, who is working with the Princeton freshmen to explore questions focusing on how to create a life worth living.

As they embark on their Princeton University careers, 15 freshmen are grappling with a question that will be central to their lives: What is the meaning of a good life?

The question is just one of many raised in the freshman seminar "Individuality as an Ideal," which is being taught this fall by Kwame Anthony Appiah, the Laurance S. Rockefeller University Professor of Philosophy and the University Center for Human Values. Appiah is a world-renowned moral and political philosopher who has taught at Princeton since 2002.

"Individuality is a great example of a topic that is both intellectually challenging and profoundly relevant to thinking about how one lives one's own life," Appiah said.

He added, "It's a perfect introduction to a liberal education ... which is an education that prepares you for a life as a free individual, in charge of interpreting your situation and marshaling the resources that you've gotten from your genome, your family, your school, your society, to manage the one life you have." 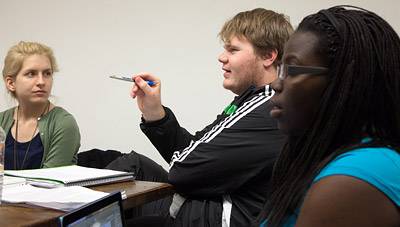 Juan-Jacques Aupiais (center) joins the discussion about ethics that crosses the long seminar table in the class of 15 freshmen, including Dalma Földesi (left) and Akua Banful (right).

Ankit Buddhiraju said he was drawn to the seminar because he wanted to discuss how individuality might be defined, and how it "has been associated with a gamut of personal qualities, both positive and negative, such as creativity, originality, nonconformity and selfishness."

For Gabriella Ravida, the class is allowing her to do something new. "I chose the seminar because I never took any philosophy classes in high school, and I wanted to start my college experience on a new note," she said.

To engage with such a thought-provoking subject, the course, which is designated as the Kurt and Beatrice Gutman Freshman Seminar in Human Values, encourages broad-ranging conversations that stem from readings of novels and philosophy.

Each class starts with a presentation by a student who summarizes and analyzes that week's texts, after which the group is invited to offer further comments.

On a recent evening, the discussion centered on Aristotle's notion of ethics and his concept of eudaemonia, which is the idea of a life well lived.

"This is hard stuff," cautioned Appiah, before asking the evening's presenter, Andrew Barnett, and the class to "go bravely into it." He encouraged the freshmen to "keep an eye on the big picture" as they gained a general sense of the ancient Greek philosopher's intellectual approach.

In his presentation, Barnett emphasized Aristotle's belief that "you need ethics in order to live the best life," and that "without a central good in life, all other things lose meaning." He also stressed the importance of self-examination and the utilitarian understanding that to live well, one must also take action for the good of others.

The seminar encourages broad-ranging conversations that stem from readings of fiction and philosophy, with Appiah (center at back) providing guiding principles and examples. Freshman Bina Peltz said the diverse experiences of her peers adds to the variety of interpretations of the subject matter.

The discussion expanded to the students seated around the long table, as they explored a variety of terms — happiness, pleasure, excellence, virtue, morality — with Appiah providing guiding principles and examples.

The conversation drew from texts covered earlier in the class, in particular the 19th-century philosopher and political economist John Stuart Mill's third chapter of his essay "On Liberty," called "Individuality as One of the Elements of Wellbeing."

The students also could think back on the novels they had read from different countries and time periods, whose main characters struggle to shape their lives in the face of changing societal landscapes. The readings included Chinua Achebe's "Things Fall Apart," Tsitsi Dangarembga's "Nervous Conditions," Stendhal's "The Red and the Black," and Kazuo Ishiguro's "The Remains of the Day."

Freshman Bina Peltz said the variety of the readings, along with the varied backgrounds of the students, provides a fertile environment for new ideas. "The diverse experiences of the other students engender a unique fusion of interpretations," she said, "while Professor Appiah's vast knowledge constantly offers us a fresh perspective." 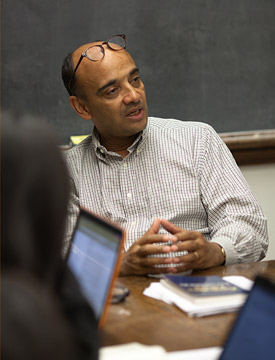 Appiah, a moral and political philosopher, said he hopes the seminar will help the freshmen "deepen their grasp of how to manage their lives for themselves," starting with their first semester at Princeton.

To evoke new perspectives, Appiah asked the students if they could offer two examples of ways of living that were worth pursuing, but that were very different from each other.

One student said, "Traveling the world and experiencing different cultures, or building a stable home and raising a family."

Delighted with the juxtaposition, Appiah offered a famous example: the life of the French post-impressionist artist Paul Gauguin, who abandoned his wife and children in order to move to Tahiti, a setting that inspired his work and propelled him to fame.

Appiah elaborated that the 20th-century British philosopher Bernard Williams used the example of Gauguin to ask the central question about which of the choices available to the artist pointed to a better life.

Going to Tahiti, said Appiah, "paid off," even at the cost of Gauguin's family. "If the life in Tahiti had amounted to nothing, we would have had a negative assessment of his life," he said. "What he did was morally wrong," but by making the choice that enabled his artistry to flourish, Gauguin ended up with a "great life, with flaws in it, but that's less important."

The example of greatness spurred a fresh question from a student who asked if more should be said about the life worth living of a "regular person."

Returning to Aristotle, Appiah answered that while the teachings of the ancient philosopher at that time addressed the well educated and the aristocracy — including Alexander the Great, who was tutored by Aristotle — he did provide numerous examples of elements that were, and remain, important to everybody for a life worth living.

"Friendships, being moral, being a decent person, not causing unnecessary harm to others, that's there for everybody," Appiah said.

Appropriate for students new to college and to Princeton, questions also surfaced about using the resources one has to advance oneself, as well as the role of ambition in building a life worth living.

"Aristotle teaches us that high ambitions not achieved might be a great life, but low ambitions achieved may not be such a good life," Appiah said.

He reminded the students, though, that Mill "makes it very clear that there are different strokes for different folks," and that "people have the right to do what they do because that is up to them."

It's a message that Appiah takes to heart himself. He wants to encourage these new Princeton students to reach high to achieve intellectual and personal goals, but he in no way wants to tell them what to do.