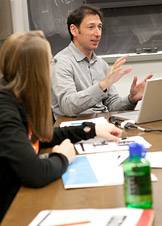 Alexander Todorov, an associate professor of psychology and public affairs at Princeton University, has designed a new freshman seminar, "The Face: The Forces That Shape How We Perceive Others," to teach students about humans' specialized mechanisms for processing, recognizing and socially assessing faces — as well as the biases that lead to errors in perception.

Professor Alexander Todorov showed the students in his freshman seminar a series of images of the same blurry face — with the hint that it was a non-American political leader — as it would appear from 200, 100 and 50 meters. At 50 meters, only one student figured out who it was — Italian Prime Minister Silvio Berlusconi.

Todorov's next example illustrated how facial recognition can have serious consequences. He showed the students a photo of Darrell Edwards, a man who is currently fighting a 1999 murder conviction based in part on eyewitness testimony. Then Todorov demonstrated what Edwards would have looked like to the eyewitness who said she saw him the night of the murder from 271 feet (about 82 meters) away, without her prescription eyeglasses. The shocked students laughed at the blurry photograph.

"The jurors didn't have that reaction. They thought it was actually possible from this distance to identify a person," Todorov said. "The fact of the matter is, from this distance, you can't identify a person. You might be able to identify somebody who's a highly familiar person based on their gait and other things, but in this case an unfamiliar person, the eyewitness, didn't know who Darrell is."

In class, Todorov shows students photos of Italian Prime Minister Silvio Berlusconi from 200, 100 and 50 meters away to demonstrate how distance and familiarity influence facial recognition. (Images courtesy of Geoffrey Loftus)

Todorov, an associate professor of psychology and public affairs at Princeton University, uses a wide array of visual aids in his course "The Face: The Forces That Shape How We Perceive Others," which is being offered for the first time this fall. His 15 students are learning about humans' specialized mechanisms for processing, recognizing and socially assessing faces — as well as the biases that lead to errors in perception.

"My ambition is to make them excited about psychology and cognitive science. It's a specialized topic but has something for everybody," Todorov said, with applications from eyewitness testimony to electoral outcomes to Hollywood casting of "attractive" performers.

Freshman Miriam Pearsall had enjoyed her psychology class in high school and was drawn immediately to the seminar topic.

"I was especially attracted to the fact that face perception has such great relevance in understanding society and the world as a whole," Pearsall said. "I love that this freshman seminar allows me to voluntarily delve in the topic. Then I can discuss what I've learned with people who are just as interested in the topic as I am." 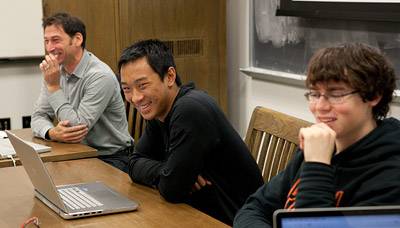 Todorov (left) incorporates material related to topics ranging from criminal justice to Hollywood casting to show students, such as Victor Hsiao (center) and David Dohan (right), the many applications of facial perception. (Photo by Denise Applewhite)

Todorov began the course, which is designated as the Shelly and Michael Kassen '76 Freshman Seminar in the Life Sciences, by explaining how the brain develops facial representations. Students learned about unique ways the brain processes faces unlike other objects almost from birth; the fact that it takes less than 50 milliseconds of glimpsing a face to extract informatino about its familiarity, age, sex, race and attractiveness; and parts of the brain such as the fusiform face area dedicated to face processing.

The class also visited the functional magnetic resonance imaging (fMRI) lab in Green Hall on campus where Todorov, with the help of a graduate student, demonstrated how brain scans are done, and students received a primer on analyzing the scans.

For Sarah Cuneo, the trip to the fMRI lab has been the highlight of the class up to this point.

"It was amazing to be able to see for ourselves all the techniques and results that we had been reading about for weeks — there's definitely a huge difference between understanding something in theory and seeing it in practice," Cuneo said.

The classroom discussions have also shed light on and enlivened some of the more technical material, she said.

"The small size of our freshman seminar gives the class an incredibly collaborative feel; we get to really engage our classmates in discussion, which means that we legitimately learn from each other," Cuneo said. "A lot of what we do in class is discussion of scientific journal articles, and it's great to have an active debate about the results. Different people in the class will offer several perspectives on the significance of any given study, and that means we get to examine a hypothesis from a variety of angles." 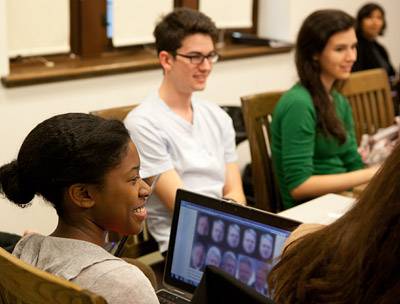 From left, freshmen Miriam Pearsall, Jacob Simon and Sarah Cuneo are among the 15 students who engage in lively discussions about the nuances of facial perception and recognition in Todorov's seminar. (Photo by Denise Applewhite)

Todorov's lesson on eyewitnesses was meant to contrast sophisticated perception skills for familiar faces with the factors in play when observing unfamiliar faces. Scientists have not yet discovered why and how the processes for perceiving familiar and unfamiliar faces are so different.

In the same class as the discussion on Edwards, students picked out Michael Jordan, Bill Clinton and Jay Leno in a slide of blurry faces. Yet earlier, students had performed poorly on a hypothetical lineup. When they were asked to match the photo of a suspect to one of 10 mug shots, the students came to a consensus on one man and were surprised when Todorov told them that none of the 10 was the suspect.

"It makes sense that we would be less able to identify unfamiliar faces, but I didn't think we would be as bad as we were. We were really, really bad," Cuneo said.

Students suggested many factors and biases that could lead to a misidentification — witnesses may be agitated or motivated to find a culprit, or they may compare the faces in the lineup to each other rather than their own memory, or expect some variation between their memory and the lineup, among other factors.

"We can use these insights for better police procedures for not arresting innocent people," Todorov said, adding that New Jersey is one of the states that changed its lineup procedures to reflect research in this area and remove some sources of bias. "The point is not to dismiss this sort of evidence but to look at it with a critical eye." 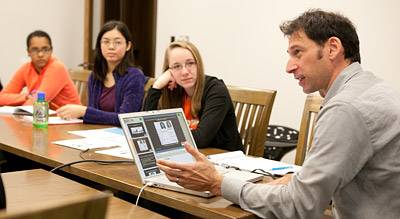 In his own lab, Todorov studies the social perceptions of faces, and he will focus on related issues for the rest of the semester. Some discussion topics include how people perceive emotional expressions, how people form first impressions, how they assess personality traits such as trustworthiness, and what makes a face attractive.

"It's great to explain the basic concepts, and I also learn from teaching them," Todorov said. "I don't really want the students to be face experts, but if they get excited about the right way to do an experiment, how to test a theory, how to rule out alternative explanations and get excited about psychology, that's great."