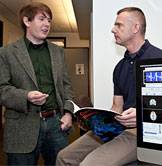 For his senior thesis, Mark Thornton (left) is working with Andrew Conway, a senior lecturer in psychology, to explore how the brain processes social information. Thornton's project crosses different branches of the field of psychology and may help open new lines of research regarding social functioning and disorders such as autism.

The work Mark Thornton has begun with his senior thesis in Princeton's psychology department may someday help answer these questions and could open up new lines of research. Thornton, whose project spans three branches of psychology, is testing a theory about the brain's processing of social information by scanning subjects' brains as they rate faces on different measures. 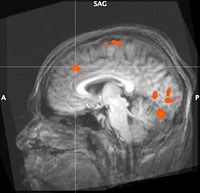 This composite image averaging the results of three participants in Thornton's research shows (in orange) the parts of the brain correlated with the working memory and social tasks in his experiment. The medial prefrontal cortex, Thornton's hypothesized base of social working memory, is marked in the crosshairs. (Image courtesy of Mark Thornton)

Thornton has hypothesized that a system that he calls social working memory is distinct from but complementary to working memory, which is what people use to hold nonsocial information in mind, such as when alphabetizing a group of words. What he describes as social working memory could be used in the act of conversation, which involves listening, watching facial expressions and body language, integrating and interpreting the information, remembering previous information or conversations, and responding, Thornton said.

While working memory function is in the lateral prefrontal cortex, which also controls planning, reasoning and decision-making, Thornton theorizes that social working memory function will be found in the medial prefrontal cortex, which is typically associated with self-reflection, forming impressions of others and understanding the mental processes of others.

Research subjects in Thornton's functional MRI experiments viewed faces such as these, generated by Professor Alexander Todorov's lab, in a series and rated them on trustworthiness and position. (Images courtesy of Mark Thornton)

"I got the idea that there's a distinct neural subsystem for doing this kind of high-level processing of social information. The more I looked into it, the more it looked like there were converging lines of evidence suggesting it, but they just hadn't been synthesized yet," Thornton said. "It's been great that I could come up with this idea myself, and the University, department and my adviser would not only support me but also devote significant resources toward me."

His adviser, Senior Lecturer in Psychology Andrew Conway, who studies working memory, meets once a week and corresponds regularly by e-mail with Thornton, but he said that his advisee has not needed much guidance. Thornton was well prepared and passionate, and his project stands out for its originality and complexity, Conway said.

"It's beyond what's required," Conway said. "His idea was totally unique and shows really clever experimental design thinking. It's the type of thing you get excited about when you see a graduate student come up with it." 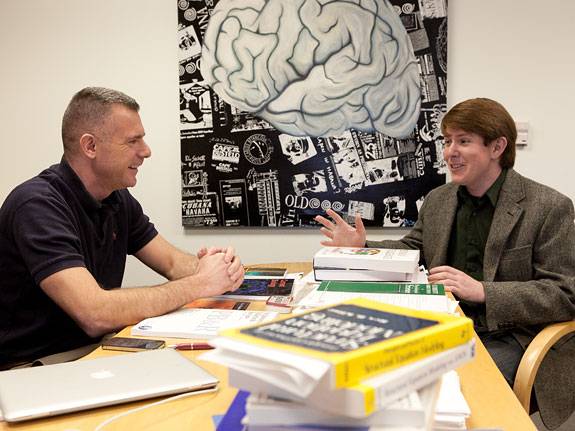 Working with Conway and other Princeton faculty, Thornton has been introduced to ideas in social psychology, cognitive psychology and neuroscience. Thornton met frequently with Conway while designing and carrying out his experiments. (Photo by Denise Applewhite)

Thornton was originally interested in studying mathematics, but psychological themes in the writings of Isaac Asimov and Marcel Proust, as well as exposure to psychology statistics, led him to major in psychology.

Through classes and research with Conway and professors Uri Hasson, Daniel Osherson, Nicole Shelton and Alexander Todorov, Thornton was exposed to ideas in social psychology, cognitive psychology and neuroscience. He also gained practical experience in designing experiments, analyzing data and using a complex device that can reveal brain activity as it happens on a very fine scale, called a magnetic resonance imaging (MRI) scanner. All of those experiences came together in his senior thesis idea in social cognitive neuroscience, a field that has emerged over the last 10 to 15 years.

To test his theory about social working memory, Thornton developed a functional MRI experiment in which subjects' brains are scanned while they look at a series of faces and perform social and nonsocial tasks using working memory. Thornton is using computer-generated faces in a database developed by Todorov's lab. Along the way, Thornton had to teach himself some computer programming, become certified in using the University's MRI scanner and get permission for his experiment from Princeton's Institutional Review Board for Human Subjects.

"You don't really appreciate how much goes into one of these projects until you do one, especially for the first time," he said. "There's a lot more work because nothing's in place and you don't know the appropriate procedures yet. A lot of your time is spent just figuring out how to do things rather than doing them."

In Thornton's experiment, each participant is given four tests. In the social tests, participants are asked whether the face is more or less trustworthy than the face one back in the series -- the previous face -- or two back in the series. In the nonsocial tests, participants are asked whether the face is positioned more to the left or right of the face one back or two back. They record their responses mechanically with a device in their right hand. They see 24 faces in a block for one set of variables, then 24 for another set, until they have gone through five blocks in each of the four sets (in random order) for a total of 20 blocks and 480 faces.

The MRI machine produces images of the brain that reflect what portions of the brain are in use during testing; a higher ratio of oxygenated hemoglobin in the blood in an area indicates that the brain region is in use. Thornton hopes that the brain scans will show activity in the medial prefrontal cortex during the social tests, and he expects to see activity in the lateral prefrontal cortex during the nonsocial tests, matching what is known about working memory.

The process has been both difficult and rewarding. Thornton struggled to design the experiment, and incidents out of his control, such as power outages and cancellations, slowed his testing. Yet he also was helped by several graduate students in the department, received funding from the University to pay his test subjects and had access to an MRI machine for his own experiment -- rare for an undergraduate, as most imaging machines are used for diagnostic purposes, not research, at medical schools and hospitals.

Thornton's research is not yet complete, but he said he expects that the scans will reveal something new about neural networks for social processing, even if they don't confirm his hypothesis.

"You can't establish a whole theory with one experiment. Over the course of several experiments, I may be able to build something," Thornton said. "If I knew for sure that I was going to get a certain answer, there wouldn't have been much point in doing it."

If he is able to pinpoint how the brain should process social information, Thornton can see several applications for his work. For one, it may give psychologists a more precise framework for measuring neural activity related to social functioning. Mapping a social working memory system also could help explain disorders that affect social skills, such as autism.

Thornton, who was born in New Zealand and grew up in Fresno, Calif., plans to continue his research as he pursues a Ph.D. in psychology at Harvard University next year.

"He's a natural," Conway said. "He's in this for the science and the long run."