Humans are adept at setting goals and updating them as new situations arise — for example, a person who is playing a video game may switch to a new goal when their phone rings.

Now, Princeton University researchers have identified mechanisms that govern how the brain incorporates information about new situations into our existing goals, according to research recently published in the Proceedings of the National Academy of Sciences (PNAS).

Using brain scans of human volunteers, researchers at the Princeton Neuroscience Institute (PNI) found that updating goals takes place in a region known as the prefrontal cortex, and appears to involve signals associated with the brain chemical dopamine. When the researchers used a magnetic pulse to interrupt activity in that region of the brain, the volunteers became unable to switch to a new task when playing a game requiring them to push a button after seeing letters pop up on a screen.

"We have found a fundamental mechanism that contributes to the brain's ability to concentrate on one task and then flexibly switch to another task," said Jonathan Cohen, Princeton's Robert Bendheim and Lynn Bendheim Thoman Professor in Neuroscience and co-director of PNI. "Impairments in this system are central to many critical disorders of cognitive function such as those observed in schizophrenia and obsessive-compulsive disorder." 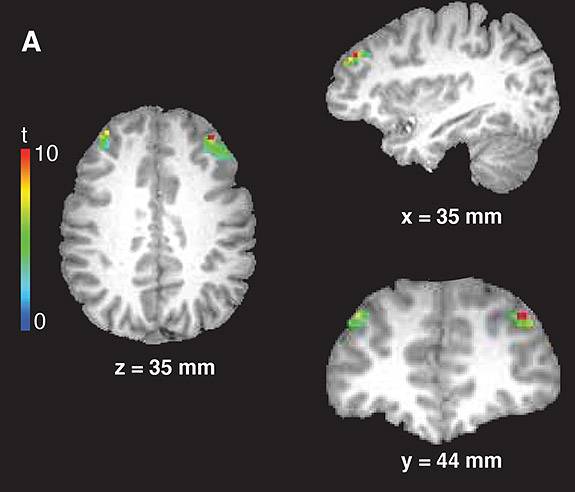 Princeton University researchers have identified mechanisms that govern how the brain incorporates information about new situations into our existing goals. Human volunteers played a game wherein they pressed a specific button depending on a particular visual cue. Functional magnetic resonance imaging showed that updating goals takes place in a region known as the prefrontal cortex. (Photo courtesy of Jonathan Cohen)

Cohen worked with lead author Kimberlee D'Ardenne, who earned her Ph.D. in chemistry and neuroscience from Princeton in 2008 and is now a postdoctoral associate at Virginia Tech; Neir Eshel, a graduate student at Harvard Medical School who conducted the research as an undergraduate as part of his Princeton senior thesis; Joseph Luka, a medical student at Tulane University School of Medicine; Agatha Lenartowicz, a postdoctoral scholar at the University of California-Los Angeles; and Leigh Nystrom, co-director of the Neuroscience Cognitive Control Laboratory at PNI.

Existing research has shown that when new information is used to update a task, behavior or goal, this information is held in a type of short-term memory storage known as working memory. Investigators did not know, however, what mechanisms were involved in updating this information.

To find out, Cohen's team used functional magnetic resonance imaging (fMRI) to scan the brains of human volunteers playing a game wherein they pressed a specific button depending on a particular visual cue. If the volunteer saw the letter A prior to seeing the letter X, he or she had to press button 1. But if the volunteer saw the letter B prior to seeing the X, the participant had to press button 2. The A and B served as the new information that the participant used to update their goal of deciding which button to press. Another version of the task required the same participants to press button 1 upon seeing an X regardless of whether an A or B was shown.

With the fMRI, the researchers detected activity in the right prefrontal cortex during tasks that required the participants to remember whether they saw an A or a B before pressing the correct button, but not during tasks where the participant only had to press the button when prompted by an X.

These results confirmed findings from a previous study led by Cohen and published in the journal Cognitive, Affective and Behavioral Neuroscience in 2010 that used another scanning method to gauge the timing of the brain activity. Using electroencephalography (EEG), the researchers found that the prefrontal cortex showed a spike in brain electrical activity 150 milliseconds after the participant viewed the context letter A or B. 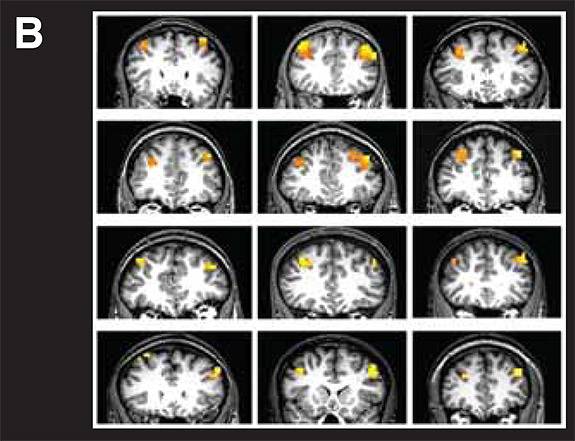 When the researchers used a magnetic pulse to interrupt activity in the prefrontal cortex, the volunteers became unable to incorporate new information into the button-pushing task. (Photo courtesy of Jonathan Cohen)

"We predicted that if the pulse was delivered to the part of the right prefrontal cortex observed using fMRI, and at the time when the brain is updating its information as revealed by EEG, then the subject would not retain the information about A and B, interfering with his or her performance on the button-pushing task," Cohen said.

Finally, the researchers explored their theory that dopamine — a naturally occurring chemical involved in motivation and reward among other brain functions — tags new information entering the prefrontal cortex as important for updating working memory and goals. Cohen and his team imaged a brain region called the midbrain, which contains clusters of nerve cells called dopaminergic nuclei that are the source of most of the dopamine signals in the brain. Using high-resolution fMRI, the researchers probed the activity of these dopamine-releasing cells in the brains of volunteers engaged in the game described above. The researchers found that the brain activity in these areas correlated both with the activity in the right prefrontal cortex and with the ability of the volunteers to press the correct buttons.

"The remarkable part was that the dopamine signals correlated both with the behavior of our volunteers and their brain activity in the prefrontal cortex," Cohen said. "This constellation of findings provides strong evidence that the dopaminergic nuclei are enabling the prefrontal cortex to hold on to information that is relevant for updating behavior, but not information that isn't."

David Badre, a Brown University assistant professor of cognitive, linguistic and psychological sciences, said that the work is an important step forward in understanding how working memory is updated. Badre is familiar with the work but had no role in it.

In a commentary published online Nov. 9 by PNAS, Badre wrote: "The mechanisms by which the brain achieves an adaptive balance between flexibility and stability remain the basis of much current investigation in cognitive neuroscience. These results provide a basis for new investigations into the neural mechanisms of flexible, goal-directed behavior."

The paper, "Role of prefrontal cortex and the midbrain dopamine system in working memory updating," was published Dec. 4 by the Proceedings of the National Academy of Sciences. The research was supported by the Regina and John Scully Center for the Neuroscience of the Mind and Behavior, the National Institutes of Health, Princeton University's R.W. Crecca '46 Senior Thesis Research Fund for Molecular Biology, and the Kane Family Foundation.