People choosing between two or more equally positive outcomes experience paradoxical feelings of pleasure and anxiety, feelings associated with activity in different regions of the brain, according to research led by Amitai Shenhav, an associate research scholar at the Princeton Neuroscience Institute at Princeton University.

In one experiment, 42 people rated the desirability of more than 300 products using an auction-like procedure. Then they looked at images of paired products with different or similar values and were asked to choose between them. Their brain activity was scanned using functional magnetic resonance imaging (fMRI). After the scan, participants reported their feelings before and during each choice. They received one of their choices at the end of the study.

Choices between two highly valued items (high-high), such as a digital camera and a camcorder, were associated with the most positive feelings and the greatest anxiety, compared with choices between items of low value (low-low), like a desk lamp and a water bottle, or between items of different values (low-high). Functional MRI scans showed activity in two regions of the brain, the striatum and the prefrontal cortex, both known to be involved in decision-making. Interestingly, lower parts of both regions were more active when subjects felt excited about being offered the choice, while activity in upper parts was strongly tied to feelings of anxiety.

Research by Amitai Shenhav and colleagues into how people experience paradoxical feelings of pleasure and anxiety when choosing between two or more positive outcomes asked study participants to choose between pairs of products with similarly low values (low-low), similarly high values (high-high) or different values (low-high). (Image courtesy of PNAS)

This evidence that parallel brain circuits are associated with opposing emotional reactions helps to answer a puzzling question, according to Shenhav: "Why isn't our positivity quelled by our anxiety, or our anxiety quelled by the fact that we're getting this really good thing at the end? This suggests that it's because these circuits evolved for two different reasons," he said. "One of them is about evaluating the thing we're going to get, and the other is about guiding our actions and working out how difficult the choice will be."

The study, "Neural correlates of dueling affective reactions to win-win choices," was published July 14 in the Proceedings of the National Academy of Sciences. Shenhav conducted the research as a graduate student at Harvard University, along with Professor of Psychology and Neuroscience Randy Buckner, the study's senior author.

A second fMRI experiment showed that the same patterns of emotional reactions and brain activity persisted even when the participants were told before each choice how similarly they had valued the items. Their anxiety didn't abate, despite knowing how little they stood to lose by making a "wrong" choice. In a third experiment, Shenhav and Buckner tested whether giving people more than two choices increased their levels of anxiety. Indeed, they found that providing six options led to higher levels of anxiety than two options, particularly when all six of the options were highly valued items. But positive feelings about being presented with the choice were similar for two or six options. 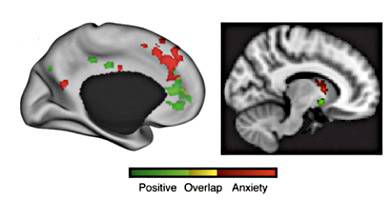 This suggests that the anxiety stems from the conflict of making the decision, rather than the opportunity cost of the choice — an economic concept that refers to the lost value of the second-best option. The opportunity cost should be the same, regardless of the number of choices. In addition, subjects in this final study were given an unlimited amount of time to make a decision, compared with 1.5 seconds in the first two studies. The results showed that time pressure was not the main source of anxiety during the choices.

At the end of each study, participants had a surprise opportunity to reverse their earlier choices. Higher activity in a part of the brain called the anterior cingulate cortex around the time of an initial choice predicted whether that decision would later be reversed. Previous work has shown that this brain region is involved in assessing how conflicted an individual feels over a particular choice; this result suggests that some choices may have continued to elicit conflict after the participant made a decision, Shenhav said. The researchers also found that people who reported more anxiety in their daily lives were more likely to change their minds.

This work could explain why ostensibly positive options can evoke a mixture of positive and negative responses, which are not explained by purely economic analyses of choice. "Rationally, there's no reason why when you put one good thing with another good thing, you should feel worse about the situation," said Brian Knutson, an associate professor of psychology and neuroscience at Stanford University, who is familiar with the work but was not involved in it. "The neuroimaging tells us that these different mechanisms are fighting with each other," he said. "Understanding that dynamic can help us understand why decisions that we think should make us feel better can actually make us feel worse."

According to Shenhav, this research could shed light on the neural processes that can make more momentous choices so paralyzing for some people — for instance, deciding where to go to college or which job offer to take. But he admits that even more trivial decisions can be tough for him. "I probably experience more win-win choice anxiety than the average person," he said. "I'm even terrible at choosing where to eat dinner."

Shenhav's research was supported by Harvard University and a fellowship from the Mortimer and Theresa Sackler Foundation. Shenhav is a C.V. Starr Fellow at the Princeton Neuroscience Institute.