So accustomed are we to metaphors related to taste that when we hear a kind smile described as "sweet," or a resentful comment as "bitter," we most likely don't even think of those words as metaphors. But while it may seem to our ears that "sweet" by any other name means the same thing, new research shows that taste-related words actually engage the emotional centers of the brain more than literal words with the same meaning.

Researchers from Princeton University and the Free University of Berlin report in the Journal of Cognitive Neuroscience the first study to experimentally show that the brain processes these everyday metaphors differently than literal language. In the study, participants read 37 sentences that included common metaphors based on taste while the researchers recorded their brain activity. Each taste-related word was then swapped with a literal counterpart so that, for instance, "She looked at him sweetly" became "She looked at him kindly." 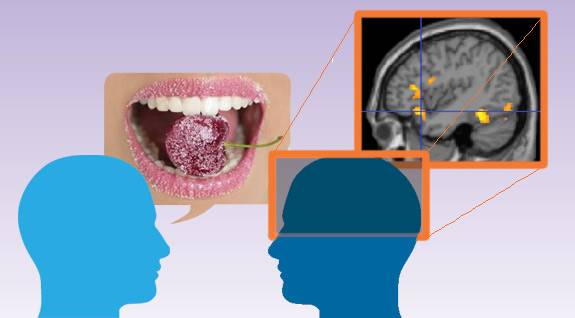 Researchers from Princeton University and the Free University of Berlin found that taste-related metaphors such as "sweet" actually engage the emotional centers of the brain more than literal words such as "kind" that have the same meaning. If metaphors in general elicit a similar emotional response, that could mean that figurative language presents a "rhetorical advantage" when communicating with others. (Photo illustration by Matilda Luk, Office of Communications)

The researchers found that the sentences containing words that invoked taste activated areas known to be associated with emotional processing, such as the amygdala, as well as the areas known as the gustatory cortices that allow for the physical act of tasting. Interestingly, the metaphorical and literal words only resulted in brain activity related to emotion when part of a sentence, but stimulated the gustatory cortices both in sentences and as stand-alone words.

Metaphorical sentences may spark increased brain activity in emotion-related regions because they allude to physical experiences, said co-author Adele Goldberg, a Princeton professor of linguistics in the Council of the Humanities. Human language frequently uses physical sensations or objects to refer to abstract domains such as time, understanding or emotion, Goldberg said. For instance, people liken love to a number of afflictions including being "sick" or shot through the heart with an arrow. Similarly, "sweet" has a much clearer physical component than "kind." The new research suggests that these associations go beyond just being descriptive to engage our brains on an emotional level and potentially amplify the impact of the sentence, Goldberg said.

"You begin to realize when you look at metaphors how common they are in helping us understand abstract domains," Goldberg said. "It could be that we are more engaged with abstract concepts when we use metaphorical language that ties into physical experiences." 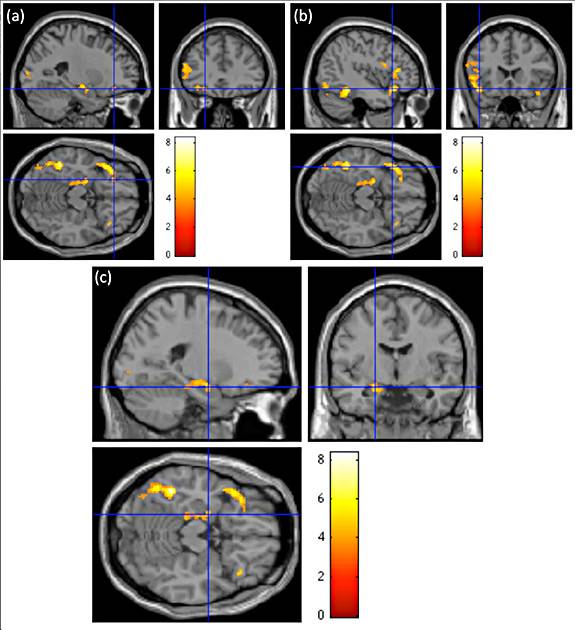 Sentences containing words that invoked taste activated areas in the lateral orbitofrontal cortex (a) and frontal operculum (b) known as the gustatory cortices that allow for the physical act of tasting. Taste-related metaphors also stimulated brain regions known to be associated with emotional processing, such as the left hippocampus, parahippocampal gyrun and amygdala (c). The colors indicate the level of activation prompted by metaphorical sentences in comparison to literal sentences with 8 signifying the greatest amount of neural activity. (Image courtesy of Adele Goldberg, Council of the Humanities)

If metaphors in general elicit an emotional response from the brain that is similar to that caused by taste-related metaphors, then that could mean that figurative language presents a "rhetorical advantage" when communicating with others, explained co-author Francesca Citron, a postdoctoral researcher of psycholinguistics at the Free University's Languages of Emotion research center.

"Figurative language may be more effective in communication and may facilitate processes such as affiliation, persuasion and support," Citron said. "Further, as a reader or listener, one should be wary of being overly influenced by metaphorical language."

Colloquially, metaphors seem to be employed precisely to evoke an emotional reaction, yet the actual emotional effect of figurative phrases on the person hearing them has not before been deeply explored, said Benjamin Bergen, an associate professor of cognitive science at the University of California-San Diego who studies language comprehension, and metaphorical language and thought.

"There's a lot of research on the conceptual effects of metaphors, such as how they allow people to think about new or abstract concepts in terms of concrete things they're familiar with. But there's very little work on the emotional impact of metaphor," said Bergen, who had no role in the research but is familiar with it.

"Emotional impact seems to be one of the main reasons people use metaphors to begin with. For instance, a senator might describe a bill as 'job-killing' to evoke an emotional reaction," he said. "These results suggest that using certain metaphorical expressions induces more of an emotional reaction than saying the same thing literally. Those expressions that have this property are likely to have the effects on reasoning, inference, judgment and decision-making that emotion is known to have."

The brain areas that taste-related words did not stimulate are also an important outcome of the study, Citron said. Existing research on metaphors and neural processing has shown that figurative language generally requires more brainpower than literal language, Citron and Goldberg wrote. But these bursts of neural activity have been related to higher-order processing from thinking through an unfamiliar metaphor.

The brain activity Citron and Goldberg observed did not correlate with this process. In order to create the metaphorical- and literal-sentence stimuli, they had a group of people separate from the study participants rate sentences for familiarity, apparent arousal, imageability — which is how easily a phrase can be imagined in the reader's mind — and how positive or negative each sentence was interpreted as being. The metaphorical and literal sentences were equal on all of these factors. In addition, each metaphorical phrase and its literal counterpart were rated as being highly similar in meaning.

These steps helped to ensure that the metaphorical and literal sentences were equally as easy to comprehend. Thus, the brain activity the researchers recorded was not likely to be in response to any additional difficulty study participants had in understanding the metaphors.

"It is important to rule out possible effects of familiarity, since less familiar items may require more processing resources to be understood and elicit enhanced brain responses in several brain regions," Citron said.

Citron and Goldberg plan to follow up on their results by examining if figurative language is remembered more accurately than literal language, if metaphors are more physically stimulating, and if metaphors related to other senses also provoke an emotional response from the brain.

The paper, "Metaphorical sentences are more emotionally engaging than their literal counterparts,'' is online and will be published in an upcoming print edition of the Journal of Cognitive Neuroscience. The research was supported by an Einstein Visiting Fellowship from the Einstein Foundation in Berlin.