Your brain knows it's time to cook when the stove is on, and the food and pots are out. When you rush away to calm a crying child, though, cooking is over and it's time to be a parent. Your brain processes and responds to these occurrences as distinct, unrelated events.

But it remains unclear exactly how the brain breaks such experiences into "events," or the related groups that help us mentally organize the day's many situations. A dominant concept of event-perception known as prediction error says that our brain draws a line between the end of one event and the start of another when things take an unexpected turn (such as a suddenly distraught child).

Challenging that idea, Princeton University researchers suggest that the brain may actually work from subconscious mental categories it creates based on how it considers people, objects and actions are related. Specifically, these details are sorted by temporal relationship, which means that the brain recognizes that they tend to — or tend not to — pop up near one another at specific times, the researchers report in the journal Nature Neuroscience.

So, a series of experiences that usually occur together (temporally related) form an event until a non-temporally related experience occurs and marks the start of a new event. In the example above, pots and food usually make an appearance during cooking; a crying child does not. Therein lies the partition between two events, so says the brain.

This dynamic, which the researchers call "shared temporal context," works very much like the object categories our minds use to organize objects, explained lead author Anna Schapiro, a doctoral student in Princeton's Department of Psychology. 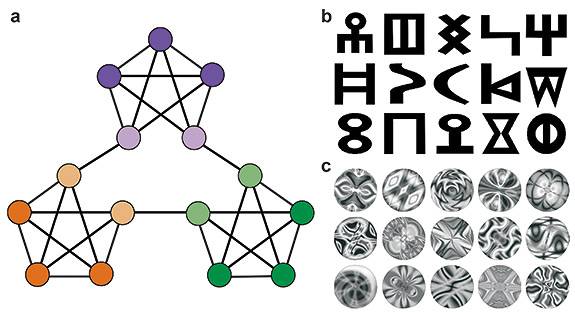 Princeton University researchers found that the brain breaks experiences into the "events," or related groups that help us mentally organize the day's many situations, using subconscious mental categories it creates. These categories are based on how the brain considers people, objects and actions are related in terms of how they tend to — or tend not to — pop up near one another at specific times. Human participants viewed abstract symbols (b) and patterns (c) that — without their knowledge — were grouped into three "communities" of five symbols or patterns. The shapes followed a sequence (a) in which symbols or patterns in the same community (separated above by color) tended to appear near one another in the sequence (lines within pentagons). Occasionally, a symbol or pattern would appear near one from another community (lines joining separate pentagons). After a half hour of viewing, participants were asked to segment the sequences into events in a way that felt natural to them, and tended to break the sequences into events that coincided with the communities the researchers had prearranged. (Image courtesy of Anna Schapiro)

"We're providing an account of how you come to treat a sequence of experiences as a coherent, meaningful event," Schapiro said. "Events are like object categories. We associate robins and canaries because they share many attributes: They can fly, have feathers, and so on. These associations help us build a 'bird' category in our minds. Events are the same, except the attributes that help us form associations are temporal relationships."

Supporting this idea is brain activity the researchers captured showing that abstract symbols and patterns with no obvious similarity nonetheless excited overlapping groups of neurons when presented to study participants as a related group. From this, the researchers constructed a computer model that can predict and outline the neural pathways through which people process situations, and can reveal if those situations are considered part of the same event.

The parallels drawn between event details are based on personal experience, Schapiro said. People need to have an existing understanding of the various factors that, when combined, correlate with a single experience.

"Everyone agrees that 'having a meeting' or 'chopping vegetables' is a coherent chunk of temporal structure, but it's actually not so obvious why that is if you've never had a meeting or chopped vegetables before," Schapiro said.

"You have to have experience with the shared temporal structure of the components of the events in order for the event to hold together in your mind," she said. "And the way the brain implements this is to learn to use overlapping neural populations to represent components of the same event." 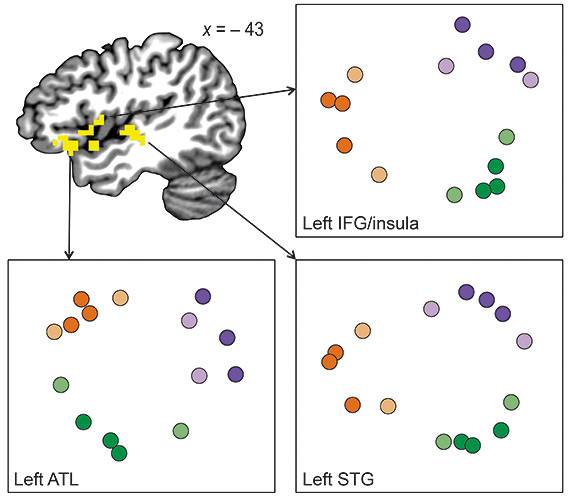 The researchers used functional magnetic resonance imaging to observe brain activity as participants viewed the symbol sequences. Images in the same community produced similar activity (above, grouped by community color) in neuron groups at the border of the brain's frontal and temporal lobes, a region involved in processing meaning. At the same time, different neural groups activated when a symbol from a different community appeared, which was interpreted as a new event. The researchers interpreted this activity as the brain associating the images with one another, and therefore as one event. (Image courtesy of Anna Schapiro)

During a series of experiments, the researchers presented human participants with sequences of abstract symbols and patterns. Without the participants' knowledge, the symbols were grouped into three "communities" of five symbols with shapes in the same community tending to appear near one another in the sequence.

The researchers then used functional magnetic resonance imaging to observe brain activity as participants viewed the symbol sequences. Images in the same community produced similar activity in neuron groups at the border of the brain's frontal and temporal lobes, a region involved in processing meaning.

The researchers interpreted this activity as the brain associating the images with one another, and therefore as one event. At the same time, different neural groups activated when a symbol from a different community appeared, which was interpreted as a new event.

The researchers fashioned these data into a computational neural-network model that revealed the neural connection between what is being experienced and what has been learned. When a simulated stimulus is entered, the model can predict the next burst of neural activity throughout the network, from first observation to processing.

"The model allows us to articulate an explicit hypothesis about what kind of learning may be going on in the brain," Schapiro said. "It's one thing to show a neural response and say that the brain must have changed to arrive at that state. To have a specific idea of how that change may have occurred could allow a deeper understanding of the mechanisms involved."

Michael Frank, a Brown University associate professor of cognitive, linguistic and psychological sciences, said that the Princeton researchers uniquely apply existing concepts of "similarity structure" used in such fields as semantics and artificial intelligence to provide evidence for their account of event perception. These concepts pertain to the ability to identify within large groups of data those subsets that share specific commonalities, said Frank, who is familiar with the research but had no role in it.

"The work capitalizes on well-grounded computational models of similarity structure and applies it to understanding how events and their boundaries are detected and represented," Frank said. "The authors noticed that the ability to represent items within an event as similar to each other — and thus different than those in ensuing events — might rely on similar machinery as that applied to detect clustering in community structures."

The model "naturally" lays out the process of shared temporal context in a way that is validated by work in other fields, yet distinct in relation to event perception, Frank said.

"The same types of models have been applied to understanding language — for example, how the meaning of words in a sentence can be contextualized by earlier words or concepts," Frank said. "Thus the model and experiments identify a common and previously unappreciated mechanism that can be applied to both language and event parsing, which are otherwise seemingly unrelated domains."