A mysterious region deep in the human brain could be where we sort through the onslaught of stimuli from the outside world and focus on the information most important to our behavior and survival, Princeton University researchers have found.

The researchers report in the journal Science that an area of our brain called the pulvinar regulates communication between clusters of brain cells as our brain focuses on the people and objects that need our attention. Like a switchboard operator, the pulvinar makes sure that separate areas of the visual cortex — which processes visual information — are communicating about the same external information, explained lead author Yuri Saalmann, an associate research scholar in the Princeton Neuroscience Institute (PNI). Without guidance from the pulvinar, an important observation such as an oncoming bus as one is crossing the street could get lost in a jumble of other stimuli. 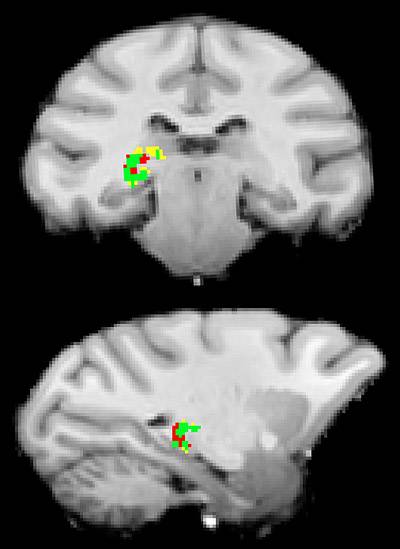 Princeton University researchers have found that the pulvinar, a mysterious region deep in the human brain, acts like a switchboard operator to make sure that separate areas of the brain are communicating about the same external information most important to our behavior at a given moment. The pulvinar uses electrical impulses to synchronize and allow more effective communication between brain cells in the visual cortex, which processes visual information. The researchers produced neural connection maps that show the pulvinar's connection to these brain regions. In this scan, the pulvinar communicates with the occipital lobe (yellow) and the temporal lobe (red) individually, and with both (green). Image courtesy of Science/AAAS

Saalmann said these findings on how the brain transmits information could lead to new ways of understanding and treating attention-related disorders, such as attention deficit hyperactivity disorder (ADHD) and schizophrenia. Saalmann worked with senior researcher Sabine Kastner, a professor in the Department of Psychology and the Princeton Neuroscience Institute; and PNI researchers Xin Li, a research assistant; Mark Pinsk, a professional specialist; and Liang Wang, a postdoctoral research associate.

The researchers developed a new technique to trace direct communication between clusters of neurons in the visual cortex and the pulvinar. The team produced neural connection maps using magnetic resonance imaging (MRI), then placed electrodes along those identified communication paths to monitor brain signals of macaques. The researchers trained the monkeys to play a video game during which they used visual cues to find a specific shape surrounded by distracting information. As the macaques focused, Saalmann and his colleagues could see that the pulvinar controlled which parts of the visual cortex sent and received signals.

"A fundamental problem for the brain is that there is too much information in our natural environment for it to be processed in detail at the same time. The brain instead selectively focuses on, or attends to, the people and objects most relevant to our behavior at the time and filters out the rest. For instance, as we cross a busy city street, our brain blocks out the bustle of the crowd behind us to concentrate more on an oncoming bus.

"The transmission of behaviorally relevant information between various parts of the brain is tightly synchronized. As one brain area sends a signal about our environment, such as that a bus is approaching, another brain area is ready to receive it and respond, such as by having us cross the street faster. A persistent question in neuroscience, though, is how exactly do different brain areas synchronize so that important information isn't lost in the other stimuli flooding our brains.

"Our study suggests that a mysterious area in the center of the brain called the pulvinar acts as a switchboard operator between areas on the brain's surface known as the visual cortex, which processes visual information. When we pay attention to important visual information, the pulvinar makes sure that information passing between clusters of neurons is consistent and relevant to our behavior.

"These results could advance the understanding of the neural mechanisms of selective attention and how the brain transmits information. This is a necessary step in developing effective treatment strategies for medical disorders characterized by a failure of attention mechanisms. These conditions include ADHD, schizophrenia and spatial neglect, which is an inability to detect stimuli often observed following stroke.

"For our study, we trained monkeys to play a video game in which they paid attention to visual cues in order to detect different target shapes. We simultaneously recorded brain activity in the pulvinar and two different areas of the visual cortex. We could see a clear connective path from one portion of the cortex to another, as well as connective paths from the pulvinar to the cortex. When the monkeys paid attention to the visual cues, the pulvinar sent electrical pulses to synchronize particular groups of brain cells in the visual cortex to allow them to communicate effectively.

"A challenge in this study was that we needed to record the activity of cells that were 'speaking' directly with each other so we could trace the line of communication. But there are billions of brain cells. Traditionally, finding a cell-to-cell connection is as likely as randomly selecting two people talking on cell phones in different parts of New York City and discovering that they were speaking to each other.

"To 'listen in' on a direct cell conversation, we developed a new approach of using electrodes to record groups of brain cells that were anatomically connected. We first mapped neural connections in the brain via diffusion tensor imaging, which uses an MRI scanner to measure the movement of water along neural connections. We then used these images to implant electrodes at the endpoints of the neural connections shared by the pulvinar and the visual cortex.

"Our mapping of these communication networks and our finding that the pulvinar is vital to attention prompts a new consideration of the mechanisms behind higher cognitive function. We challenge the common notion that these functions depend exclusively on the cerebral cortex, the outermost layer of the brain responsible for decision-making, attention and language, among other abilities. It also suggests that the prevailing view that visual information is transmitted solely through a network of areas in the visual cortex needs to be revised to include the pulvinar as an important regulator of neural transmission."

The paper "The Pulvinar Regulates Information Transmission Between Cortical Areas Based on Attention Demands" was published Aug. 10 by Science, and was supported by the National Science Foundation and the National Eye Institute, part of the National Institutes of Health.

After producing neural connection maps, the researchers used electrodes (blue arrows and green crosshairs) to monitor the direct communication paths (yellow-orange) between the pulvinar and clusters of brain cells, which in this case are in the temporal lobe. Image courtesy of Science/AAAS

Saalmann is available to discuss his research with interested members of the news media and can be contacted at saalmann@princeton.edu, 609-258-8318, or through Princeton University science writer Morgan Kelly at 609-258-5729 or mgnkelly@princeton.edu.

The spotlight of attention is more like a strobe, say researchers