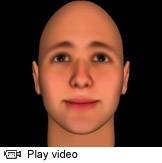 Who can be trusted? View a video that demonstrates the expressions characteristic of a trustworthy person. 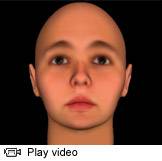 Who's dominant? View a video that demonstrates the expressions characteristic of a dominant person.

What's in a face?

Plenty, according to scientists at Princeton University.

A pair of Princeton psychology researchers has developed a computer program that allows scientists to analyze better than ever before what it is about certain human faces that makes them look either trustworthy or fearsome. In doing so, they have also found that the program allows them to construct computer-generated faces that display the most trustworthy or dominant faces possible.

Such work could have implications for those who care what effect their faces may have upon a beholder, from salespeople to criminal defendants, the researchers said.

In a paper appearing in the online edition this week of the Proceedings of the National Academy of Sciences, Alexander Todorov, an assistant professor of psychology and public affairs at Princeton, and Nikolaas Oosterhof, a research specialist, continue an inquiry into the myriad messages conveyed by the human face. In 2005, Todorov's lab garnered international headlines with a study published in Science demonstrating that quick facial judgments can accurately predict real-world election results.

Taking what they have learned over time -- namely that, rightly or wrongly, people make instant judgments about faces that guide them in how they feel about that person -- the scientists decided to search for a way to quantify and define exactly what it is about each person's face that conveys a sense they can be trusted or feared. They chose those precise traits because they found they corresponded with a whole host of other vital characteristics, such as happiness and maturity.

"Humans seem to be wired to look to faces to understand the person's intentions," said Todorov, who has spent years studying the subtleties of the simple plane containing the eyes, nose and mouth. "People are always asking themselves, 'Does this person have good or bad intentions?'"

To conduct the study, the scientists showed unfamiliar faces to test subjects and asked them to describe traits they could gauge from the faces. The scientists boiled down the list of traits to about a dozen of the most commonly cited characteristics, including aggressiveness, unkemptness and various emotional states. The researchers showed the faces to another group and asked them to rate each face for the degree to which it possessed one of the dozen listed traits.

From there, using a commercial software program that generates composites of human faces (based on laser scans of real subjects), the scientists asked another group of test subjects to look at 300 faces and rate them for trustworthiness, dominance and threat. Common features of both trustworthiness and dominance emerged. A trustworthy face, at its most extreme, has a U-shaped mouth and eyes that form an almost surprised look. An untrustworthy face, at its most extreme, is an angry one with the edges of the mouth curled down and eyebrows pointing down at the center. The least dominant face possible is one resembling a baby's with a larger distance between the eyes and the eyebrows than other faces. A threatening face can be obtained by averaging an untrustworthy and a dominant face.

These examples show computer-generated faces displaying the common features the Princeton researchers' test subjects rated as trustworthy: from most trustworthy at left; to neutral in the middle; to least trustworthy at right. Credit: Oosterhof & Todorov

Using the program and the ratings from subjects, the scientists could actually construct models of how faces vary on these social dimensions. Once those models were established, the scientists could exaggerate faces along these dimensions, show them to other test subjects to confirm that they were eliciting the predicted emotional response, and find out what facial features are critical for different social judgments.

"If you can think of an emotion being communicated by the face as a kind of signal, you can understand that we can amplify that signal into what was almost a caricature to see if we get the proper effect," Todorov said. "And we do."

The research raises questions about whether the brain is equipped with a special mechanism for "reading" or evaluating faces, he said. Some studies of infants have shown that, when offered a choice between looking at a random pattern and one resembling a human face, infants prefer the face. And there is evidence that face-seeking is deeply rooted in both the psyche and evolution as the amygdala, a primitive region of the brain, is stimulated when someone spies a scary face.

While it may be true that people have little control over their facial features, the study also indicates that expressions may be important as well, which could have implications for people in jobs that require extensive interactions with the public.

The research was supported by the National Science Foundation and a Huygens Scholarship from the Netherlands Organization for International Cooperation in Higher Education.