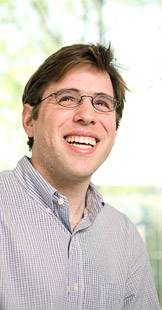 Matthew Salganik, an assistant professor of sociology, is using the Internet to develop creative new approaches to social science research -- exploring wide-ranging questions about behavior, decision-making and social networks. He often uses the Internet to collect data and conduct experiments. His recent study of social networks illuminates connections and behaviors in the real and virtual world. (Photo: Brian Wilson)

Why do certain songs become hits while others flop? How can individuals be encouraged to consider the public good rather than act selfishly? Why are casual relationships sometimes as important as connections to friends and family?

Those are the kinds of wide-ranging questions that Assistant Professor of Sociology Matthew Salganik has been using the Internet to answer in an approach that is opening new avenues of social science research.

"The Internet has already changed the way we live and work, but it has only started to change the way we do social science," said Salganik, who came to Princeton this fall for his first professorial position.

Salganik often uses the Internet to collect data and conduct experiments. His recent study of social networks illuminates connections and behaviors in the real and virtual world.

Robert Wuthnow, chair of the Department of Sociology and the Gerhard R. Andlinger '52 Professor of Social Sciences, noted that Salganik is among several new assistant professors in the department who are using the Internet and other new technologies to tackle difficult social questions. "His research is especially innovative in combining the Internet and applied mathematics to test theories about the effects of social networks," Wuthnow said.

In his first class at Princeton -- an undergraduate course on social networks -- Salganik demonstrated how networking websites popular with students, such as Facebook, also can be a valuable research tool for collecting information on social structures and relationships.

Devah Pager, an associate professor of sociology, said Salganik has already become a "remarkable ambassador" for the department.

"His creative use of Web-based experiments has allowed him to make exciting contributions within the field of sociology, and at the same time has attracted attention across campus, from ecology, psychology, computer science and applied math, to name just a few," Pager said.

Salganik's work also stretches beyond his own field. He and Adrian de Froment (left), a graduate student in ecology and evolutionary biology, currently are working to create a Web-based game that examines the conditions under which individuals will choose actions that benefit the public good rather than just their own interests. The experiment will inform de Froment's research on environmental issues. (Photo illustration: Brian Wilson)

Salganik's doctoral dissertation at Columbia University, where he earned his Ph.D. in 2007, set him on the road of Web-based research.

He conducted an online experiment to examine why cultural products succeed or fail -- essentially why a book such as "Harry Potter" became a huge success even though it was initially rejected by publishers.

Salganik developed a website where participants could download previously unknown songs. Users were randomly assigned to different virtual rooms where they listened to and downloaded songs with or without knowledge of other users' choices depending upon the room.

The data from more than 27,000 participants provided insight into the role of social influence in the creation of fads, and Salganik and co-authors published their findings in Science.

"When people knew what other people were doing the success of the songs became more unequal and unpredictable. The song that happened to be successful with the first users in one room, became more successful and that led to these kind of popularity snowballs," Salganik said. "Stars became megastars and flops became megaflops."

By setting up parallel worlds on the Internet, Salganik also could study the role that chance plays in success, proving how difficult it can be to predict the next big thing.

"We saw that as social influence increased, it became increasingly difficult to predict which particular song would be successful," Salganik said. "We had one song that was No. 1 in one room, and No. 40 out of 48 in another. It was the exact same song competing against the same set of songs, but in one room it got lucky and in the other room it didn’t."

Salganik said the music experiment is a great example of the Internet's potential as a research tool.

"The scale of the Internet is massive. Think about filling up Madison Square Garden and having all of those people participating in your study. That’s what’s possible with Web-based experiments," he said.

"In the music experiment we had people do what they do anyway -- downloading music on computers," he said. "Experiments on the Web allow you to collect information on behavior that is less likely to be confounded by the artificial setting of a lab."

To further exploit the Web as a research tool, Salganik said he thinks it's key to develop new, attention-grabbing experiments that work within the Internet's unique dimensions, rather than simply duplicating lab experiments online.

"You have to recognize that people can just close their browser if they aren't interested," he said. "We have to think of new ways of collecting data on the Web that are open to the fact that people can leave at any time. If you just take existing lab experiments and put them on the Web, that’s probably not going to work."

They have teamed up with a professional video game designer to create a Web-based game that examines the conditions under which individuals are more likely to act for the good of a group. While the experiment's design is still being refined, it will explore the tension between the public good and private interest that arises in many contexts of environmental decision-making, such as issues of pollution or "overfishing," which results in the depletion of fish stocks.

While Salganik is extending a new frontier of social analysis through his innovative Web-based research, he also has a solid background in traditional methods.

Salganik earned an undergraduate degree in math from Emory University in 1998 and a master's degree in sociology from Cornell University in 2003. Before enrolling in graduate school, he worked at the U.S. Census Bureau as part of a project to check the accuracy of the 2000 census.

For his master's thesis at Cornell, he and adviser Douglas Heckathorn presented new findings on the effectiveness of respondent-driven sampling. The method is used to survey hidden populations who are key to understanding and controlling the spread of HIV/AIDS, such as intravenous drug users and sex workers. Salganik said he recently presented the findings at the Centers for Disease Control and Prevention, which is using the sampling method for a study of drug users in the 25 biggest U.S. cities.

In his undergraduate class, "Social Networks," Salganik taught students about classic sociological experiments and had them try to replicate the results through traditional data collection methods and through the Internet. Salganik initiated the course last fall and will teach it again this coming fall.

One exercise involved students using Facebook to collect information on social ties. The students could make sociological observations by being able to easily map their network of relationships -- such as how people's acquaintances can sometimes influence their lives as much as their close connections (such as the job opening passed along through a friend of a friend, or the apartment for rent where a co-worker's son lives).

"Professor Salganik often applied data that we had collected from Facebook to illustrate the concepts that we were discussing in class," said junior Matthew Prisco. "It was these applied approaches that made the material more relevant and easier to conceptualize."

Motivated by his experience in class, Prisco said he is using Facebook to perform a study of Princeton's undergraduate social networks -- residential colleges, eating clubs, athletic teams -- for his junior paper.

"Throughout the whole process, it has been very fulfilling for me to apply the practical knowledge and spirit of inquiry with which Professor Salganik equipped our class over the course of the semester," Prisco said.

Salganik said he has quickly embraced the various roles of Princeton professor, continuing his research while teaching classes and advising independent student work.

"My first year teaching at Princeton has been a lot of fun. The students here are engaged and interested," Salganik said.

Dhwani Shah said Salganik has been an invaluable adviser for her junior paper on Wikipedia, the free Internet encyclopedia that readers can edit. Shah is studying how people interact and establish their authority on Wikipedia's discussion pages, where users can debate entries and explain their edits.

"Professor Salganik is truly passionate about researching websites and social networks. His enthusiasm for the work is contagious and really inspires me to work my hardest to achieve success in my research," Shah said.

Salganik said one of the pleasures of his job is advising junior papers and senior theses.

"It was great to see the students struggling with not knowing what to do. Research can be really murky; you don't know what the question is exactly and you don't know what to do at first," he said. "Trying to digest a lot of information and finding the important question is part of the experience, and I think it's really great that undergraduates here go through that process."

Junior Kristen Young said Salganik has been a valuable mentor as she waded through the beginnings of her junior paper centered on the 3-D virtual community Second Life.

"Professor Salganik is interested in cutting-edge sociological research and greatly encourages his students to partake in all of the excitement," Young said. "I like the fact that Professor Salganik directed me to do something original and different."