Following the Monday, Sept. 15, faculty meeting, Dean of the College Nancy Malkiel issued the following statement on behalf of the Faculty Committee on Grading regarding grading results for 2007-08:

The Faculty Committee on Grading today announced the results of the three most recent years of implementation of Princeton's new grading policy. The results for 2005-08 continue to bear out the progress the committee reported on last year, when it said, "The Princeton faculty has now demonstrated conclusively that with clear intent and concerted effort, a university faculty can bring down the inflated grades that -- left uncontrolled -- devalue the educational achievements of American college students. The Princeton faculty is working successfully to restore educational content and meaning to the letter grades earned by the highest-achieving students in the United States."

As the chart below shows, in 2005-08, the most recent three-year period under the new grading policy, A's (A+, A, A-) accounted for 40.4 percent of grades in undergraduate courses, down from 47.0 percent in 2001-04, the three years before the faculty adopted the new policy. The chart also shows the progress made by each division. 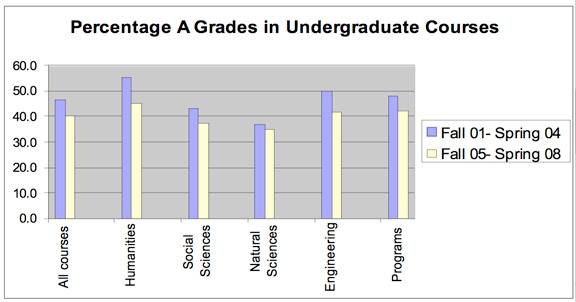 The committee noted the remarkable success of many departments in bringing their grades down, but observed also that there continues to be considerable variance in departmental outcomes. Comparing the single-year results for 2002-03 and 2007-08 provides a dramatic illustration of the point. Thirteen departments reduced their percentage of A grades by 15 to 29 percent; another six departments achieved reductions of 8 to 12 percent. And eight departments that were already in essential compliance with the policy maintained their performance over that five-year period.

The committee noted, however, that a small number of departments present cause for concern, either because of backsliding from gains previously realized, or because of grades that continue to be well out of range, with negligible signs of progress. The committee will be working closely with those departments in the months ahead to devise specific strategies for turning these situations around.

The Grading Committee once again reiterated its confidence in the educational benefits of the faculty's successful effort to bring grades under better control, and it reaffirmed its reports of the last two years that there have been no discernible negative effects of any kind on the fortunes of Princeton students in the various external marketplaces in which they compete for jobs and graduate and professional school admissions. Detailed data about employment and admissions will be included in the second edition of the pamphlet, Grading at Princeton: Frequently Asked Questions, which will be distributed later this month to all faculty, undergraduates and undergraduate parents.

The Faculty Committee on Grading consists of six elected faculty members: Lynn Enquist, molecular biology; David Howell, East Asian studies; Daniel Marlow, physics; Jennifer Rexford, computer science; Anne-Marie Slaughter, Woodrow Wilson School; and Robert Vanderbei, operations research and financial engineering. The dean of the faculty, the dean of the college and the registrar serve ex officio. The committee's charge from the faculty is to assess the progress made in implementing the new grading expectations and to advise on ways of making further progress.