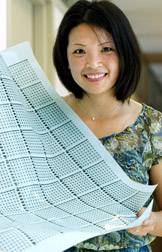 Lynn Loo, an associate professor of chemical engineering, is the co-director of one of four interdisciplinary research groups that make up Princeton's Center for Complex Materials. She and her colleagues are developing plastic-based electronic devices, such as these circuit elements printed on a flexible sheet for use in electronic displays. (Photo by Frank Wojciechowski)

The National Science Foundation has awarded nearly $20 million to the Princeton Center for Complex Materials, an interdisciplinary research program dedicated to improving and developing materials for uses ranging from alternative energy production to quantum computing.

The grant provides six years of funding (2008 to 2014) for the Princeton center, which is one of 26 research programs in the United States supported by NSF's Materials Research Science and Engineering Centers program.

The new funding represents the largest of the four such grants Princeton has received since the University first won the highly competitive award in 1994. The Princeton center brings together faculty and students from five science and engineering departments to explore the basic properties of matter and to use their discoveries to advance science and technology.

"These grants are intended to be collaborative, and that's something Princeton can do very well," said Richard Register, a chemical engineering professor and director of the materials science center. "We have strength and depth in certain research areas that address some of the fundamental problems society faces. Materials science is one of those areas."

Among the many potential applications of Princeton's research are quantum computer chips capable of ultra high-speed processing, spaceship batteries that charge themselves in far reaches of the universe, and plastic-based solar panels, LED lights and TV screens that are energy efficient as well as lightweight and flexible enough to be rolled up and carried almost anywhere. 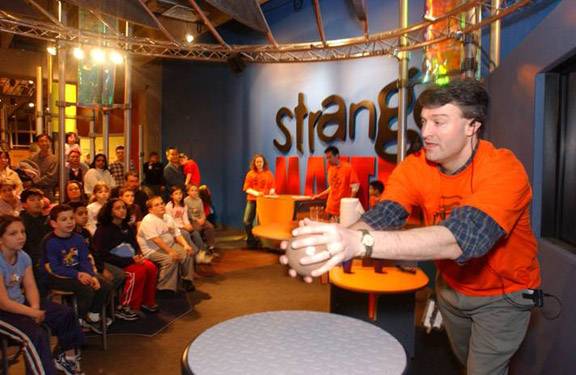 Richard Register, a chemical engineering professor and the director of the Princeton Center for Complex Materials, gives a demonstration at the Material Research Society’s "Strange Matter" exhibit at Liberty Science Center in Jersey City, N.J. The exhibit is part of the center's science education outreach program. (Photo by Susan Farley)

"Materials science is the study of how materials can be improved and how unknown materials can be discovered to serve purposes that can improve our day-to-day existence," said Phuan Ong, a professor of physics and associate director of the center.

As an example of the transformative potential of this kind of research, Ong noted that techniques for purifying silicon developed in the 1950s at Bell Labs led to the invention of solid-state transistors. By replacing the clunky vacuum tubes then in use, transistors, in turn, led to the development of miniaturized circuits which ushered in modern computers. "It was an invention that was as important as the wheel and fire," Ong said. "It introduced us to the computer age."

Since the Princeton center was formed, its researchers have made numerous discoveries, several of which were reported in the prestigious journals Science and Nature. A number of new technology patents have also emerged from the program and others are pending.

One group, headed by Ong, studies the strange electrical properties of certain substances. During the summer, Professors Zahid Hasan, Robert Cava and Ong published papers in Nature and Science that reported their discovery of novel electronic states in purified and alloyed forms of the element bismuth.

The researchers found that the electrons behaved oddly in these materials, acting more like photons (particles of light) and neutrinos (massless particles that emanate from the sun) than ordinary electrons. In theory, these properties could lead to new kinds of solid-state electronic devices. For instance, the materials might be able to store information similar to the way current transistors store data, leading to much smaller and faster computers. 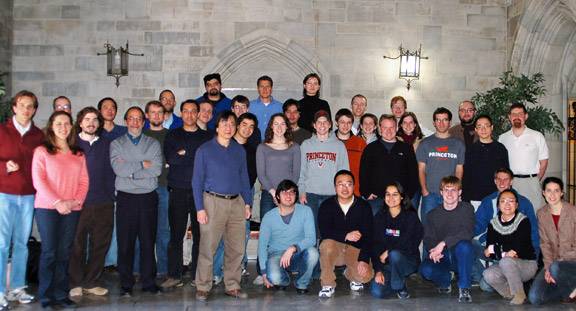 In April, other researchers in the Princeton center, led by physics professor Ali Yazdani, reported in Science that they'd found evidence that expands the current understanding of high-temperature superconductivity, an exotic electrical state that could revolutionize the way power is distributed to homes and businesses through electrical grids.

Another interdisciplinary research team focuses on the use of plastics to manufacture electronic devices more cheaply and quickly than is possible with inorganic conductors such as copper and silicon.

Such electronics already are used in smart windows that alter their tint with changes in sunlight and in electronic paper used in digital books. The plastics technology also might be used to manufacture solar panels that would provide a portable and inexpensive source of alternative energy.

"One day, you might roll one of these panels up, stick it in a backpack and use it as a source of power while camping," Register said.

The other two research groups at the Princeton center focus on nanostructures, tiny man-made objects that are only visible with the help of an electron microscope.

One team concentrates on understanding the magnetic and electric properties of the nanostructures, while the other attempts to coax the structures into building themselves -- since manufacturing something so small is extremely difficult.

In addition to research, the center also sponsors regional outreach programs for local schools to bolster students' interest in science and engineering.

Through the Princeton University Materials Academy, a program established in 2002 by the center's education director, Daniel Steinberg, the center develops materials science teaching modules that it then disseminates to high schools throughout New Jersey.

The Princeton scientists also work with regional universities to inspire interest in science among underrepresented minority students and with the Liberty Science Center in Jersey City, N.J., to sponsor materials science exhibitions and shows.