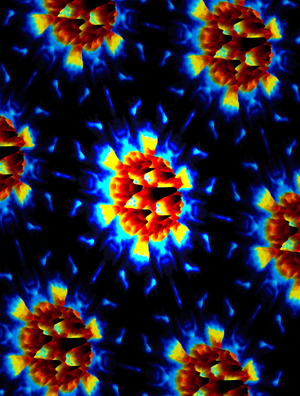 This image depicts the pattern that emerges when topological surface wave electrons scatter from defects and each other. These patterns provide direct evidence for "spin-locking" for these unique electronic states. (Image: Roushan and Yazdani)

In two separate studies, Princeton-led teams of scientists have found a new type of "light-like" electron and visualized for the first time another type that doesn't bounce back when material imperfections are encountered on the surface of special insulators. The discoveries advance the fundamental understanding of condensed matter physics and may have implications for the development of computing devices millions of times faster than today's most powerful computers.

The work hinges on the use of special bismuth-based insulating crystals developed at Princeton by Robert Cava, the Russell Wellman Moore Professor of Chemistry, and his research team. The electrons in these materials, called topological insulators, are governed by a phenomenon called the quantum Hall effect, which influences their motion in strange ways.

This effect is typically only observed when a two-dimensional semiconductor is subjected to an extraordinarily strong magnetic field at low temperatures. But in the unusual, three-dimensional crystals developed at Princeton, it occurs spontaneously because the electrons are traveling so close to the speed of light that, according to the theory of relativity, they effectively generate their own magnetic field. In this scenario, the quantum Hall effect dictates that the electrons are able to flow freely on the outside of the crystal, but not through it. The result: an insulator with surfaces that conduct electricity.

"It is like there is some almost magical thing that prohibits electrons from going inside these special metal boxes," said Zahid Hasan, an assistant professor of physics at Princeton and leader of a team that first published their discovery of the quantum Hall effect without an applied magnetic field in topological insulators in April 2008.

Building on that work, Hasan and his collaborators published results July 20 in the journal Nature demonstrating their ability to tune the behavior of the electrons so they don't act like normal electrons containing mass, but rather like mass-less, "light-like" particles, which are superior for conducting electricity. In addition to being "light-like," these particular electrons are "spin-locked." All electrons spin on their axes as they move, but their spin typically does not matter for their direction of travel. These electrons, however, can only travel in a direction perpendicular to the way they are spinning on their axes. For example, if they are traveling to the right, they must be spinning counter-clockwise.

These "light-liked, spin-locked" electrons, called helical Dirac fermions, had been proposed in theory, but never before found in three-dimensional materials. By tuning the electrons to act in this way, the scientists are able to calibrate the surface conductivity of the topological insulator.

"This is a major breakthrough in that they showed how you could control the material to get to the sweet spot [featuring the light-like behavior of electrons] where the surfaces are most interesting," said theoretical physicist Charles Kane of the University of Pennsylvania, who is not affiliated with the research. "Two things had to be done -- first, the bulk of the material had to be made a good insulator, and second, the energy of the surface states had to be adjusted to be precisely at the right point. By tuning the surface to the sweet spot, it opens the door to a whole host of new things you can try to do."

A second team of scientists, including Hasan and led by Princeton physics professor Ali Yazdani, report in the Aug. 9 issue of Nature the first direct visualization of "spin-locked" electrons on the surface of a different kind of topological insulator. Previous experiments to explore the behavior of this kind of electron in topological insulators required scientists to eject them out of the material to analyze them. But using specially constructed scanning tunneling microscopes, Yazdani's team was able to watch the electrons in action, providing a new window of understanding on how they move and conduct electricity.

These microscopes enabled the team to watch surface electrons behaving as waves and to measure the wave ripples as they scattered from material imperfection, just as ripples of water in a pond might move away from a boulder or the shore. Analyzing the ripples, the group saw a surprising phenomenon: The surface electrons did not scatter backward when they ran into defects in the material.

"In typical materials, electrons scatter from defects in all directions, including being scattered back, which makes materials resistive for carrying electricity," Yazdani said. "But electrons in these so-called topological surface states cannot make a U-turn."

The observed immunity to backscattering is explained by the spin-locking phenomenon, which was discovered by a Hasan-led team but never before visualized directly. For these exotic electrons to make a U-turn, they not only have to change the direction in which they travel, but flip the orientation of their spin. Normal collisions with surface defects do not affect the spin of electrons, leading to the protection witnessed by Yazdani's group.

Protection from electron backscattering and random changes of spin orientation, as well as the tunable nature of the electrons on the surfaces of topological insulators, make the materials promising for use in quantum computers that could process information millions of times faster than even the best machines of today. These computers would take advantage of the rules of quantum mechanics that dictate the behavior of subatomic particles. By exploiting the principle of "quantum superposition," which may allow multiple possible outcomes of a computation process, quantum computers could convey information and solve problems in a way far superior to the binary system used by digital processors.

"In principle, this [ability to tune] allows a route toward making a topological quantum computer," Kane said. "A lot of very interesting science needs to be done before that is realized, but this is a step in that direction."

In the future, Hasan's team intends to continue the work on tuning helical Dirac fermions to use them for quantum computing and to simulate certain particles that haven't been experimentally studied, such as those that existed in the moments immediately before the Big Bang. If successful, this could shed some light on the nature of dark matter, which has never been observed but is postulated to make up more than 90 percent of the universe.

Yazdani's team will explore possible techniques to change the spin of these electrons when desired, providing scientists with more control over their quantum behavior.

These latest studies are the product of an ongoing collaboration between physicists and chemists asking questions, finding answers and exploring new experimental directions suggested by their results.

"To my mind, our work on topological insulators is a poster-child for how well interdisciplinary research can work when the right group of people get going in an exciting new area of research," Cava said.

The team was supported by the U.S. Department of Energy, the Swiss Light Source of the Paul Scherrer Institute, the Alfred P. Sloan Foundation, an R.H. Dicke Postdoctoral Fellowship, the Kavli Institute of Theoretical Physics at Santa Barbara, Princeton University, and a National Science Foundation Materials Research Science and Engineering Center grant through the Princeton Center for Complex Materials.