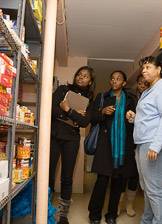 In the course "The Politics of Race and Health in America," students combine traditional coursework with a community-oriented research project examining residents' access to food and health resources in New Jersey, particularly in Camden, New Brunswick, Newark and Trenton. From left, seniors Davion Chism, Gabrielle Wilson and Danielle McKoy discussed food supplies and client needs with Jackie Hayes, assistant manager of The Apostles' House in Newark.

The current state of the U.S. economy crystallized for Princeton senior Davion Chism earlier this month, when she and several classmates interviewed food bank workers and food pantry clients in Newark.

"While giving has not gone down, need has gone up. We learned that the economic struggles on Wall Street are seen right on the local streets," said Chism, a politics major.

Chism is enrolled in the course "The Politics of Race and Health in America," a politics and African American studies course examining structural and political reasons for racial disparities in the rates of cancer, diabetes, HIV/AIDS, infant mortality and other health issues. Taught by Associate Professor of Politics and African American Studies Melissa Harris-Lacewell, the class also is part of Princeton's Community-Based Learning Initiative (CBLI), which integrates real-world research with classroom learning. For the CBLI portion of the class, students split into groups that studied different aspects of food availability in New Jersey.

"Food and nutrition are core health issues; they affect dozens of other outcomes we care about in the class," Harris-Lacewell said. In a recession, or whenever any low-income family faces economic difficulty, "the first thing that happens is that families have to start making food choices to maintain their other fixed costs. When belts get tightened, they literally get tightened."

The Princeton students focused on Camden, New Brunswick, Newark and Trenton through a variety of activities: researching health and racial disparities; mapping health- and food-related infrastructure and services; tallying food availability in grocery stores; and interviewing residents and key leaders in each city. 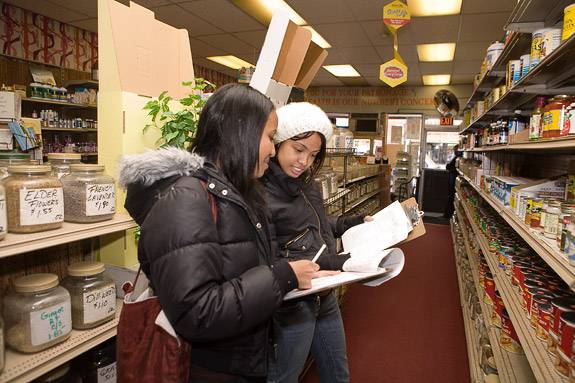 Seniors Luwam Berhane (left) and Stephanie Fleurantin conducted an inventory at a grocery store in Newark to observe the types of food available to local residents.

In addition to gaining valuable experience, the students may be contributing real solutions to the course's community partner, Catholic Health East (CHE), a multi-institutional health system with hospitals and other facilities in 11 eastern states from Maine to Florida.

"Students working on all aspects of this research project are collecting important information about food and health in New Jersey," said CBLI Assistant Director Trisha Thorme. "We believe that their work will move the conversation around these issues forward."

Their main partner within CHE's regional health system is the Lourdes Center for Public Health, which serves Camden, Trenton and Newark.

Stanton Miller, director of the center, said, "Over the next decade, our nation will be refocusing issues of health care from not only care of the acutely ill but also addressing issues of disease prevention and chronic disease management. It certainly is a very effective tool for an urban health system such as Lourdes and CHE-New Jersey to be able to network with a class at Princeton for an in-depth study of a critical aspect of good health access to nutritious food."

The fieldwork complements Harris-Lacewell's lectures and reading assignments, which were designed to help students think critically about the factors involved in health outcomes.

"I really wanted to talk about a substantive policy issue that the country was talking about, which was health care, but in a way a politics person would, rather than a policy person," she said. "Questions of race and health have everything to do with power and the distribution of resources. Those resources can include everything from medical access to grocery stores."

Sophomore Adam Bradlow, who interviewed Camden residents about local food resources, said the course has taught him to ask questions rather than rely on conventional wisdom or assumptions.

"Professor Harris-Lacewell did an excellent job grounding the theory of the classroom with facts on the ground," he said. Students were able to "talk with residents about their lives and the impact that the issues we discussed in class were having on their families."

The students' conclusions will be revealed in final reports due in January, but they have commented on their initial findings through the course blog.

"It's clear that they're making the linkages, getting in a very deep way the connection between the structure of politics and food choices available to people," Harris-Lacewell said. 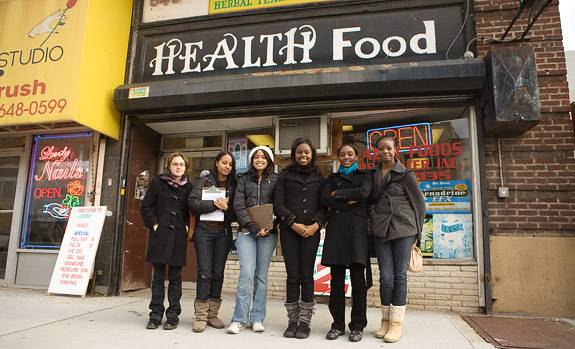 During their trip to Newark to research food-related issues, students stopped at Health Food, a shop on Broad Street, to check store shelves for nutritious items.