by Steven Schultz and Chris Emery

Technology Review magazine has named two innovations by Princeton researchers -- a method for dramatically improving Web access in developing nations and a technique for sequencing DNA more cheaply and quickly -- to its 2009 list of "10 technologies that can change the way we live."

The magazine, which annually assesses leading researchers and their work, reported that one of the innovations, by computer scientists Vivek Pai, Anirudh Badam and colleagues, could make Internet access more affordable around the world.

The magazine noted that the other invention, developed in the labs of engineering professor Stephen Chou and physics professor Robert Austin, could lead to a way to sequence DNA "so fast and cheap that an entire human genome can be read in eight hours for $100 or less."

The computer scientists created what they call HashCache, a method for greatly speeding access to Web pages while reducing the need for computer memory and electricity by 90 percent. The HashCache system, like a standard Web browser, stores (or caches) information from sites that have already been visited to speed up access the next time. The innovation, however, is to store the information much more efficiently so that even an outdated PC could retrieve the equivalent of the entire contents of Wikipedia quickly and with little computing power.

"Instead of pulling down information from the Web once per person, you pull it down once per school or once per business," said Pai, an associate professor of computer science. Very large computer storage disks have become very cheap, but the standard technology for sorting through all that information requires significant computing power. With HashCache, "you can drive this system off really cheap machines, any desktop you have lying around or these $200 laptops for kids." 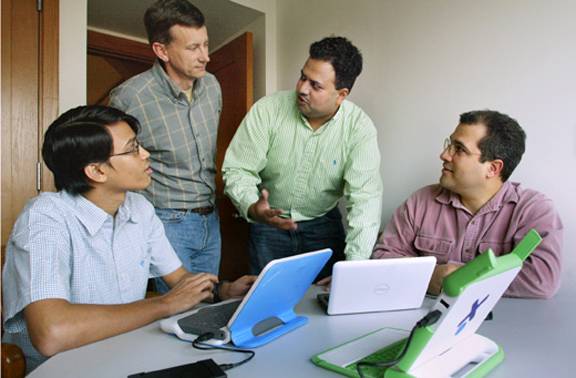 Princeton researchers test their system for speeding Web access with low-cost, low-power laptops being targeted for use in developing regions. The researchers are, from left: Anirudh Badam, Larry Peterson, Vivek Pai and Marc Fiuczynski. Another collaborator, KyoungSoo Park, is not shown. (Photo: Frank Wojciechowski)

Pai's research group includes Badam, a graduate student, who led the development effort, and KyoungSoo Park, who is now a faculty member at the University of Pittsburgh, as well as Marc Fiuczynski, a research scientist, and Larry Peterson, chair of Princeton's computer science department.

Peterson said the innovation could help bring Internet access to another billion people beyond the 1.6 billion who currently have access. "Vivek's focus on bringing the Internet to the next billion is an important one," Peterson said. "The industrialized world is well-connected. The last billion have more urgent needs, such as clean water. But the next billion have poor connectivity and little infrastructure and could really benefit from the improved education, health and commerce that Internet access would provide."

Pai is exploring various options for deploying the technology. One approach would be to offer free licenses to anyone in the developing world who wanted to set up a faster network. Another would be to develop an inexpensive commercial product that combines the necessary hardware and software into a simple plug-in device that would require no expertise for a user.

In the meantime, Pai is continuing to push his research efforts, which have mostly focused on ultra-fast and high-performance networking, toward creating solutions for people with less access to equipment and power. In the fall, he will co-chair a workshop titled "Networks and Systems for Developing Regions."

"The goal is to help out people in the developing world in whatever way makes the most sense," Pai said.

The other innovation noted by Technology Review magazine that emerged from Princeton labs, uses a series of ever-narrowing channels to stretch out strands of DNA, so that the molecule can be sequenced and key genes indentified. The method was licensed by a Philadelphia-based startup, BioNanomatrix, through Princeton's Office of Technology Licensing.

"If the company succeeds, a physician could biopsy a cancer patient's tumor, sequence all its DNA, and use that information to determine a prognosis and prescribe treatment -- all for less than the cost of a chest X-ray," according to Technology Review. "If the ailment is lung cancer, for instance, the doctor could determine the particular genetic changes in the tumor cells and order the chemotherapy best suited to that variant." 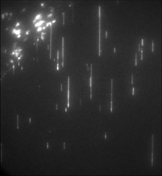 Electrical current is used to draw DNA, which normally coils into a tight ball, through a series of branching nanochannels, which forces the molecules to stretch into an orderly line. The white blotches seen at the top left of this microscopic image are coiled DNA molecules waiting to enter the series of channels. The verticle white lines are straightened strands of DNA moving through the nanochannels. (Image: Courtesy of Stephen Chou)

Austin, a professor of physics, began exploring ways to use channels to stretch DNA molecules in the mid-1990s. He teamed up with Chou, the Joseph C. Elgin Professor of Engineering, who began working on nanofabrication technology in 1982, to develop cheaper and faster ways to produce the channeled chips through which the DNA is passed. BioNanomatrix was started in 2003 by Han Cao, a biologist from Chou's lab.

DNA normally bundles itself into a tight ball, a form that's impossible to analyze, so it must be unraveled to read its sequence of nucleotides, the molecules that comprise the structural units of genetic code.

The current method for sequencing a person's genome requires chopping each DNA strand into millions of shorter segments, duplicating each segment a million times, sorting them by size and piecing the original sequence back together -- a time-consuming and costly process.

In contrast, the concept developed at Princeton only requires one strand of DNA and allows it to be analyzed directly without duplication or sorting, which drastically speeds the process and lowers the cost.

Electrical current is used to draw the molecules through chips, which are perforated by thousands of branching channels that become increasingly narrow until they are only 100 nanometers wide or less.

"The DNA cannot bunch up; it has to straighten out to fit through the channel," said Chou. "This is a completely different technology from conventional methods. The approach we are pursuing is to look at a single strand of DNA in real time." 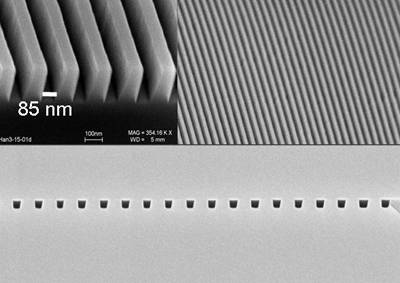 Princeton researchers developed a method for stretching DNA molecules by drawing them through tiny channels less than 100 nanometers wide. One million channels can be printed onto a 4-by-4-inch quartz wafer (top). The imprinted wafers are then sealed with another piece of quartz to create pipe-like channels (bottom). (Image: Courtesy of Stephen Chou)

Austin's group initially used lasers to bore the channels in their chips, but the channels were too wide to stretch DNA straight and drilling each chip by laser took far too long to be economical. Chou's expertise in building nanoscale structures produced a solution.

Chou developed a method for producing narrower channels and applied a technique he developed, called "nanoimprint," to mass produce the DNA chips.

Instead of cutting every DNA chip with a laser, nanoimprint allowed mass production of many DNA chips in a way similar to a printing press. The nanoimprint technique, which has broad applications in a number of areas of science and engineering, was included in Technology Review's 2003 list of emerging technologies.

Though the DNA chips hold potential for working with longer lengths of DNA, the question still remains of how to read the genetic code as the molecules pass through the channels.

Chou said there are a number of ways to approach the problem, from using current techniques of labeling genes with fluorescent markers to scanning the molecules with a tiny electronic sensor and feeding a person's genetic code directly into a computer -- something with which he currently is experimenting.

"Ours is a pure electrical engineering method," he said. "But theoretically there are several ways to read DNA. We want to find the fastest and cheapest method."