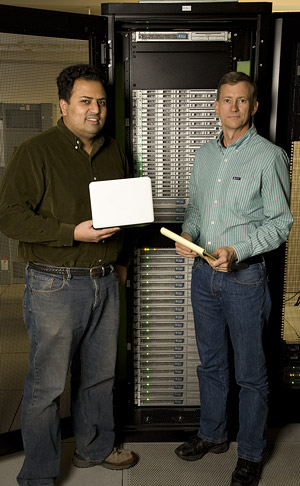 By breaking files of rich Internet content into small pieces, distributing them across the network, and caching them near end users, the CoBlitz large-file transfer service developed by computer science professors Vivek Pai (left) and Larry Peterson dramatically increases the capacity of existing networks without the need to modify the clients or servers already in use. (Photo: Denise Applewhite)

What it does: This scalable, large-file transfer service enables the distribution of rich Internet content, such as video, by breaking files into smaller pieces, distributing the pieces throughout the network and caching them near end users. This greatly increases the capacity of existing networks without needing to modify the clients or servers already in place.

Inspiration: CoBlitz developed from a research project by Peterson and Pai seeking to increase network capacity to distribute online content, an increasingly important problem as servers become overwhelmed with demand for rich content. After demonstrating success in a pilot effort to distribute University Channel videos, the team completed a trial project with Polish Telecom where a real-world deployment is now under way.

Commercialization status: CoBlitz, a company established by the researchers in 2007, recently was awarded a Small Business Innovation Grant from the U.S. government and has signed its first customer, Polish Telecom.