Five inventions with the potential for societal benefit and commercial applications have been awarded support through Princeton's Intellectual Property Accelerator Fund, which aims to help promising technologies bridge the gap between the laboratory and the marketplace.

The innovations include a secure cloud storage system, improved starting materials for 3-D printing, a technology for detecting explosives from a distance, a three-dimensional audio system for multiple listeners, and a method for coping with increasing demand in wireless networks. Each project will receive approximately $100,000.

Consumers and companies are increasingly storing data in remote storage services collectively known as "the cloud," but concerns about reliability and privacy have surfaced, especially in the wake of recent security breaches.

A new solution called "CYRUS (Client-defined privacY-protected Reliable cloUd Storage)" offers a way for individuals to use cloud storage while maintaining privacy and reliability. CYRUS integrates multiple cloud storage systems from different providers, ensuring that files are recoverable if one or more cloud fails, and that no single storage provider can release the stored information when hacked.

The project exemplifies the emerging trend of "fog networking," where the cloud descends to the level of client devices. The project will be led by Mung Chiang, the Arthur LeGrand Doty Professor of Electrical Engineering, director of the Keller Center, and director of the Program in Technology and Society.

Although 3-D printing has grown in popularity as a manufacturing technique, the technology suffers from high failure rates and slow printing speeds. A team led by Salvatore Torquato, professor of chemistry and the Princeton Institute for the Science and Technology of Materials, has developed high-quality powdered starting materials that could lead to improved reliability and faster printing.

Also known as additive manufacturing, 3-D printing involves depositing thin layers of a material — in many cases, a powder — on a surface, and then applying heat to fuse the powder particles together. Torquato and his team are creating disordered powders that are much denser and less porous than existing powders, and thus easier to fuse. The use of low-porosity powders can boost printing speeds up to tenfold and reduce the required energy by a third.

The technology for producing low-porosity powders is applicable to metals, ceramics, cement and glass. The project, "Granular Composite Density Enhancement Ultra Low-Porosity Powders for Industrial Additive Manufacturing," will be conducted with co-inventor Adam Hopkins, who earned his Ph.D. in chemistry at Princeton in 2012 and his Bachelor of Arts in physics in 2005, and is now the CEO of a startup company called Uniformity Labs.

A remote detection system for explosives

A system that can detect trace amounts of chemical and biological weapons from a distance could have benefits in many areas, including homeland security, environmental protection and 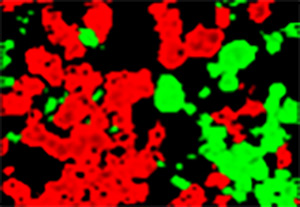 health. A technique developed by Arthur Dogariu, a research scholar in the Department of Mechanical and Aerospace Engineering, is enabling fast, remote detection and identification of explosives such as TNT, ammonium nitrate, potassium chlorate and other chemical explosives. Dogariu has also demonstrated that the technology works for the detection of biohazards such as bacterial spores, and it is being tested in biomedical research, in particular to study the role of nanoparticles in lung inflammation.

The system involves directing laser beams at a sample to determine its molecular makeup from a distance of at least one meter, while also scanning over a large area. The goal of the funding for the project, "Standoff Real-Time Hyperspectral Imaging Using Coherent Anti-Stokes Raman Spectroscopy (CARS)," is to develop a portable prototype that can be used in the field.

A system that delivers realistic three-dimensional sound could revolutionize the audio experiences of moviegoers as well as improve teleconferencing and enhance in-car communication. A team led by Edgar Choueiri, professor of mechanical and aerospace engineering, developed the audio technology, which delivers three-dimensional sound reproduction similar in quality to what the listener would have heard in the original recording venue.

The technology is already commercially available in some brands of wireless speakers, but Choueiri has since extended the listening experience to multiple listeners via multiple speakers. The funding for the project, "Development of Dynasonix Demo Platforms for Three Critical Commercial Audio Applications," will allow Choueiri to develop three separate demonstration platforms that could be used to illustrate the potential applications for this technology in theaters, for teleconferencing, and in automobiles.

A solution to the increasing demand on wireless networks

Paul Prucnal, professor of electrical engineering, and his team are developing a technology that could make high-speed Internet access as widely available as cellphone service by enabling data transmission in a vastly underused region of the spectrum, the millimeter-wave regime. The technology, called a photonic beamformer, uses light in the form of guided laser beams to generate and steer millimeter-wave signals through a wireless communication channel to transfer large amounts of wireless data to users. The project, "Multi-Gb/s Wireless Backhaul Using Photonic Millimeter-Wave Beamforming," involves developing a prototype beamformer and the required hardware and software.

Princeton's Intellectual Property Accelerator Fund is supported by the Office of the Dean for Research and the Office of Technology Licensing.

A technology called a photonic beamformer could make high-speed Internet access as widely available as cellphone service by enabling data transmission in a vastly underused region of the spectrum, the millimeter-wave regime. (Image courtesy of Paul Prucnal, Department of Electrical Engineering)