A new initiative to encourage bold and creative research at Princeton University is poised to bear fruit: The first annual Dean for Research Innovation Funds have been awarded to a group of projects that push the boundaries of research in the natural sciences, encourage research partnerships with industry, and facilitate collaborations between investigators in the arts and the sciences or engineering.

Created in fall 2013 to encourage promising and original research, the program supports projects that may be too risky for conventional funding sources, or involve uncommon collaborations, according to Dean for Research Pablo Debenedetti, the Class of 1950 Professor in Engineering and Applied Science and professor of chemical and biological engineering.

"Through these new funds, Princeton University is enabling its researchers to pursue promising ideas that are at the early stages as well as collaborations that lead to new discoveries," Debenedetti said.

—"Neuron bridge" for nerve injury
Injuries to the spinal cord and other parts of the nervous system can be impossible or difficult to repair because new nerve cells have difficulty traversing the damaged or scarred region. Professor of Molecular Biology Jean Schwarzbauer and Professor of Chemistry Jeffrey Schwartz have been awarded $188,000 to develop an implantable "bridge" over which new neurons can grow.

The "neuron bridge" is open to the cellular environment so it could promote new neuron growth without restricting nutrients. The bridge is patterned with parallel stripes — made through surface-modification chemistry — that encourage support cells to grow toward the other side of the damaged region. As the cells grow, they assemble a supportive scaffold known as extracellular matrix, providing a cable-like structure that spans the injury site on which new neurons can grow and make connections with other neurons. 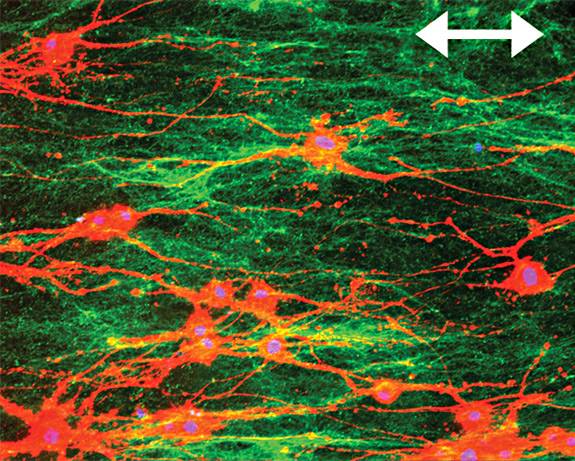 To treat severe nerve damage, Professor of Molecular Biology Jean Schwarzbauer and Professor of Chemistry Jeffrey Schwartz have designed a "neuron bridge" over which new neurons could grow, replacing damaged ones. They use a surface patterned with raised stripes, which Schwartz compares to lanes on a bridge, to encourage cells to align and grow in the same direction. The image shows neurons (red) growing on an aligned extracellular matrix (green). (Image courtesy of Jean Schwarzbauer, Department of Molecular Biology)

—A total system for studying the brain and behavior
Scientists have much to learn about how the brain takes in information, processes it and directs the body to respond. To develop a system for studying these steps in a living organism, Joshua Shaevitz, an associate professor of physics and the Lewis-Sigler Institute for Integrative Genomics, and Andrew Leifer, a Lewis-Sigler Fellow, will receive $200,000 over two years.

The researchers will develop an all-in-one system for studying how neuronal activity dictates behavioral responses in the roundworm Caenorhabditis elegans, whose brain contains about 150 neurons rather than the millions found in larger animals.

Shaevitz and Leifer will build a prototype consisting of multiple cameras and light sources mounted above the worms as they move. Blue light will stimulate activity of targeted neurons while the cameras capture the activity of all of the neurons in the brain and simultaneously track the worms' movement. A computer program will combine the input and imaging data to decipher how the neuronal activity leads to behaviors.

To reconstruct the carbon dioxide levels of the distant past, Daniel Sigman, the Dusenbury Professor of Geological and Geophysical Sciences, has received $193,000 over two years to measure the carbon trapped in the fossils of phytoplankton shells.

Trapped in the shell wall, the fossil-bound organic matter is protected from biological decomposition and chemical alteration, preserving it for millions of years. A method for extracting minute quantities of organic matter has already been developed at Princeton and applied to nitrogen, and Sigman is confident that the technique can be applied to carbon-based compounds.

• Collaborations between artists and scientists or engineers awards:

—Ancient art and the Higgs boson
What does the Higgs boson have to do with ancient art? A technique proposed to study the boson — involving elementary particles called muons — can also be used to learn how ancient artifacts were made, according to two Princeton professors, Robert Bagley of art and archaeology and Christopher Tully of physics. The researchers have been awarded $145,000 to explore using muons to probe the manufacture of Chinese Bronze Age vessels and bells.

Muons can travel through walls and already have been used to search for hidden chambers in Egyptian pyramids. The ability to travel through objects could provide art historians a way to see inside the bronze walls of ancient vessels, Bagley said.

The funding will go toward developing a muon beam imaging system and the purchase of a high-precision X-ray fluorescence (XRF) spectrometer, which reveals the identity of surface metals and can be used to provide performance benchmarks for the muon beam. The XRF will be available to art researchers on campus. The project also offers opportunities for undergraduates to travel to the Fermi National Accelerator Laboratory near Chicago to test the muon beam.

—Flock logic
Collective animal motion — from flocking birds to schooling fish — is inspirational to artists and intriguing to scientists and engineers.

A collaborative group of artists and engineers is exploring how these complex flocking motions emerge from individual movements defined by simple rules of response, rather than from a preset choreography or designated leader. The original project, conducted in 2010 and known as Flock Logic, involved dancers that communicated via visual cues. To extend their explorations to include sound and three-dimensional movement, the research team will receive $75,000.

The faculty members involved in the project are Naomi Leonard, the Edwin S. Wilsey Professor of Mechanical and Aerospace Engineering; Susan Marshall, professor of dance in the Lewis Center for the Arts; and Daniel Trueman, professor of music.

In addition to artistic questions, the project will enable the exploration of questions about how the collective motion of groups emerges, and is influenced by, the rules of response, the dynamics of social interactions, the distribution of information across the group, the spatial surroundings, the noise in measurements and the uncertainty in decision making. These insights could inform the designs for control of robotic groups.

—Creative matter
Art is made from materials, and these materials — whether paint, metal, clay, wood or stone — can help broaden our understanding of art in an environmental context.

Researchers will explore the materials used in pieces from Princeton's collection of historical American works. The collaboration will enable art historians to learn more about the environmental and social impacts of art materials, such as whether certain paints were toxic or whether a type of wood was hewn by slave labor.

—Improving the production of biofuels
Biofuels are an eco-friendly alternative to fossil fuels, but they are not yet able to replace fossil fuels. Richard Register, the Eugene Higgins Professor of Chemical and Biological Engineering, has been awarded up to $250,000 over three years to collaborate with an industrial partner on a technology that can help boost the production efficiency of a biofuel known as butanol.

Butanol has advantages over the more commonly used ethanol, which is so corrosive that it can constitute no more than 15 percent of each gallon of regular gasoline. By contrast, butanol can be used at 100 percent strength.

Yet butanol production — carried out in large vats via a process known as fermentation by organisms such as yeast or bacteria — is restricted by the fact that the butanol kills off the very organisms that produce it. To maximize the efficiency of production, the butanol must be regularly removed from the water in a bioreactor.

Register aims to develop a specialized filter for separating out butanol. He has teamed with Promerus LLC, an Ohio-based subsidiary of Sumitomo Bakelite Co., Ltd. specializing in manufacturing specialty polymers. Princeton will match Promerus' contribution to the research in years two and three of the project up to $75,000 per year, and has allocated $100,000 for research in year one.

—Faster wireless networks
As smartphones and other wireless devices grow in popularity, the amount of data communication resources — or bandwidth — will not be able to support consumer demand for wireless access.

One way of alleviating the bandwidth barrier is through improvements in signal processing. For example, it is possible to 'cancel' the channel on which one is sending a signal, allowing two communicating devices to send and receive along the same channel, potentially doubling the number of available channels. However, traditional electronics-based approaches to the problem tend to be slow and are vulnerable to noise and interference.

Professor of Electrical Engineering Paul Prucnal and his team have been awarded funding to work with an industrial collaborator, L-3 Communications Telemetry-East, to develop a low power, portable microchip that combines the unique physics of light together with electronics. Princeton will match L-3 Communications Telemetry-East's contribution to the research in years two and three of the project up to $75,000 per year, and has allocated $ 100,000 to the project in year one.

Photonic systems primarily use light to encode information and allow a large amount of data to be sent very quickly with little loss of signal and low signal-to-noise ratios. Electronic systems can operate using low power and are highly portable. An optical interference cancellation system that uses photonics and electronics could improve the efficiency of communications and expand the bandwidth availability of cellphones.

More information about these projects is available on the Office of the Dean for Research website.