Enhanced cybersecurity, non-scarring tattoo removal, 3-D photography and a laser-scanning device are projects selected for Princeton University's Intellectual Property Accelerator Fund, which supports discoveries that have significant potential for further development into products or services. The roughly $100,000 each researcher receives enables the prototyping and testing that technologies need to attract interest from startups or from established companies looking for innovative products.

"Transferring innovations from the University to the marketplace enables economic activity and carries the transformative potential that can lead to major improvements in the quality of our everyday lives," said Pablo Debenedetti, Princeton's dean for research and the Class of 1950 Professor in Engineering and Applied Science, and a professor of chemical and biological engineering. "The IP Accelerator Fund offers the opportunity for the University to support innovation at a critical point in the development of a new technology, when it is just starting to show its promise."

"We are excited that Princeton is able to provide funding to help these inventors advance their technology further along the commercial development spectrum," said John Ritter, director of technology licensing at the University.

Each year, the IP Accelerator Fund is awarded to a handful of technologies through a competitive process. The four technologies receiving the award this year are listed below.

Shopping, banking and health care management are increasingly taking place online, so finding secure ways to transmit data has become vitally important. A team led by Professor of Electrical Engineering Paul Prucnal has developed a highly secure way of transmitting data by hiding it in plain sight. The technique involves hiding the existence of the coded message within the "noise" of optical signals, such as those used in the fiber optic cables that transmit Internet data. These signals, which are carried by light particles (photons) rather than electrons, are inherently more secure because electronic signals give off radio frequencies that can be detected and decoded, Prucnal said.

Princeton University's Intellectual Property Accelerator Fund supports discoveries that have significant potential for further development into products or services. Each year, the IP Accelerator Fund is awarded to a handful of technologies through a competitive process. The four technologies receiving the award this year include a method by a team led by Professor of Electrical Engineering Paul Prucnal to hide digital data in "plain sight" using the "noise" of an optical signal. The left panel shows a typical signal while the right panel contains a message hidden in the noise of the signal. The hidden message is impossible to detect. Eavesdroppers remain unaware of the existence of the message, so they cannot decode it. (Image courtesy of Paul Prucnal, Department of Electrical Engineering)

"Once an eavesdropper knows that an encrypted message exists, he or she can eventually decrypt the data via a combination of techniques and computing power. Our strategy is to hide the existence of the message itself," Prucnal said. "Our aim is to develop a product that could be used in the health care industry, banking and other industries where clients and customers need secure data transmission."

To encode the message, a device at the sender's side converts the data into a digital signal and embeds it into the existing "noise" of the signal traveling through the fiber. A second reference version is also sent. Both versions must reach their destination at the proper time for the message to be decoded. If for some reason that doesn't happen, the message is lost.

The team includes graduate student Ben Wu and Andrew McCandless of the Louisiana-based technology services company Bascom Hunter. The funding the researchers received will go toward the design and packaging of the encryption and decryption devices.

A new technology that uses very short pulses of low-energy laser light could enable millions of people to remove unwanted tattoos. Unlike existing tattoo-removal technologies, the new system, developed in Princeton's Department of Mechanical and Aerospace Engineering, causes no damage to the skin.

Existing technologies, which use higher-energy lasers, can cause damage similar to a second-degree burn. Removal often takes a dozen or more such treatments, conducted over a year or more with time spent between each treatment to allow the skin to heal. The scars can persist for decades. Roughly 65,000 to 100,000 tattoo removal procedures are carried out in the United States each year, but the researchers say that there is a much larger untapped market: people who would like to remove their tattoos but have not done so due to cost or safety and scarring concerns.

A new tattoo-removal system could enable millions of people to remove unwanted tattoos without the scarring existing methods cause. The technology uses a femtosecond laser to deliver rapid, low-energy pulses of light to the tattoo (left), which results in tattoo removal (right) that is less painful and less scarring. (Image courtesy of Alexander Smits and Szymon Suckewer, Department of Mechanical and Aerospace Engineering)

The non-damaging tattoo removal is possible because of the use of extremely short laser pulses in rapid succession, said Alexander Smits, the Eugene Higgins Professor of Mechanical and Aerospace Engineering, who pioneered the technology with Szymon Suckewer, a professor of mechanical and aerospace engineering. The technology uses a type of laser called a femtosecond laser, which fires light pulses that are 1 million times more intense than existing tattoo-removal lasers. A single laser can remove different colors of ink, so the technique may be less expensive than existing technologies in the long term. Because little or no damage to the skin occurs, repeated treatments can be carried out over shorter periods of time.

"The energy is delivered over a very short time but at very high intensity," Smits said. "This energy can interact directly with ink molecules, breaking bonds between them with almost no heating of the skin tissue." The broken molecules of ink then either migrate out of the skin or are taken up by the bloodstream and later excreted from the body.

Smits and Suckewer worked closely on the technology with a Lawrenceville, N.J., dermatologist, Steven Hubert, who noted, "This degree of successful tattoo removal is unprecedented in effectiveness, speed and comfort."

The project received early funding from Princeton's Project X, a fund that gives faculty members in the engineering school the freedom to pursue unconventional ideas, even if those ideas are outside of a researcher's direct expertise. Prototypes have already demonstrated that the technique is effective, but the U.S. Food and Drug Administration must approve it. The researchers' IP Accelerator funding will go toward further testing in preparation for applying for FDA approval. 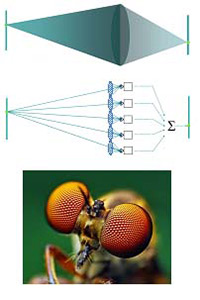 High-resolution, 3-D capability can be added to any camera using a technology in development by Jason Fleischer, an associate professor of electrical engineering. In a conventional image (top), light rays are collected by a lens onto a point, yielding high spatial detail but the loss of depth (middle). Using an array of lenslets gives different angular perspectives, much like the compound eye of an insect (bottom), but spatial resolution is greatly reduced. Fleischer's new work combines both imaging methods to create a 3-D technology that can be added to a typical camera to produce 3-D photographs. (Image courtesy of Jason Fleischer, Department of Electrical Engineering)

We live in a three-dimensional world but our photographs reveal only two dimensions. The flattening of photos, said Jason Fleischer, associate professor of electrical engineering, leaves out a lot of information, from the true distance of that mountain in your vacation photo to important depth information for medical, scientific and military uses.

Fleischer and graduate students Chien-Hung Lu and Stefan Muenzel have developed a method for adding 3-D capability to any camera or imaging system, while preserving the resolution of the camera. Existing 3-D photography systems, such as the commercially available Lytro camera, cannot match the resolution of today's cameras, causing pictures to become pixelated or blurry when viewed in detail.

The new system takes two pictures, one with an existing camera and one with an add-on device Fleischer's team developed that provides 3-D information. The add-on device contains a matrix of small lenses, or lenslets, that function in a way that is similar to an insect eye by collecting images of the object from different perspectives. In human vision, each eye collects an image from a slightly different perspective, and our brains construct depth from the slight differences in the images. Insects integrate many such images. To date, however, researchers have struggled to incorporate lenslets into cameras without sacrificing image resolution.

Fleischer solved this problem by also creating a computer program that rapidly combines the depth information from the lenslets with information from the main camera image to create the 3-D picture. The algorithm for doing this uses techniques that are commonly used in today's cameras to combine multiple images, such as when stitching together panoramic images.

"The idea is that whatever existing camera you have, we can add something to it to give three-dimensional capability," Fleischer said. When complete, the technology will be a simple attachment that is compatible with any system, be it a simple point-and-shoot camera or an advanced microscope camera.

The technology behind the innovation is supported by the Air Force Office of Scientific Research. The IP Accelerator Fund award will go toward improving the initial prototypes and algorithms as well as creating software for the user.

Optical scanning made fast and easy

From telecommunications to biomedical imaging, many industries today rely on the movement of laser light across a surface at high speeds. A simple example is a supermarket scanner that uses a beam of laser light to read a barcode.

Many of the industrial uses of this type of optical scanning require very precise control and rapid movement of a beam of light to a desired location on a surface in a back-and-forth motion. Existing technologies, however, have limitations in speed, accuracy and the ability to accommodate different properties of the light, such as wavelength or polarization. 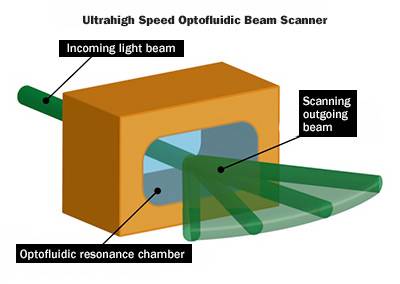 A team led by Professor Craig Arnold in the Department of Mechanical and Aerospace Engineering has invented a technology for using sound waves to shape the scanning movement of a laser, which could find many applications in industries such as telecommunications, biomedical imaging and semiconductor manufacturing. In the diagram, the outer chamber (yellow) sends sound waves through a fluid inside an optofluidic resonance chamber that steers the light beam in different directions. (Image courtesy of Craig Arnold, Department of Mechanical and Aerospace Engineering)

A technology developed by Professor Craig Arnold in the Department of Mechanical and Aerospace Engineering and the Princeton Institute for the Science and Technology of Materials (PRISM) could provide extremely rapid and accurate control of laser light using sound waves. The Tunable Acoustic Gradient (TAG) technology, developed by Arnold's team with funding from the National Science Foundation and the Department of Defense, involves using sound waves to shift light as it passes through a liquid. A startup company, TAG Optics, has harnessed an aspect of this technology to create a rapidly focusing lens for imaging and materials processing.

Arnold's team recently demonstrated the ability of the TAG technology to move a beam of light in a rapid scanning motion on a surface. Their award will be used to support the continued development of a prototype and associated electronics with the goal of commercializing the system over the next year.

The key advantages of the TAG technology over existing laser-scanning methods include the ability to work with a wide range of wavelengths, polarizations and light intensities, as well as a faster scanning speed. The technology could be used in sensors, biomedical imaging, semiconductor manufacturing, telecommunications and other industries.

"We see a number of commercial needs for this device and have already received inquiries from potential customers," Arnold said. "We are excited by the opportunity to develop this optofluidic beam scanner and are thankful for the IP Accelerator Fund which provides the opportunity to bridge the gap from a research device to a commercial prototype, funding that is extremely valuable and difficult to come by."