Six new technologies — from a method that enhances X-ray images to a strategy that eliminates cybersecurity threats — will receive University funding aimed at helping to transform promising discoveries from the laboratories at Princeton into widely available products and services for the benefit of society.

The projects were chosen based on their potential to make a meaningful impact and on the promise that additional research conducted at Princeton will make the projects more attractive for further development by outside entities such as startup companies. The University's Intellectual Property Accelerator Fund provides up to $100,000 per project to be spent on additional proof-of-concept research, prototype development or other activities aimed at expanding the potential for innovation.

"Our aim is to help faculty members and their research teams accomplish the goal of seeing their discoveries reach the public where they can have a real-world effect, either through improving people's health, providing technological capabilities that boost our productivity and experiences, or through innovations that can improve our lives in ways that we haven't anticipated," said John Ritter, director of Princeton's Office of Technology Licensing. "That is what is exciting about university research."

The funded projects include innovations from across the spectrum of research areas, from biomedical and life sciences to engineering and physical sciences.

Finding bad batteries before they find you

Despite improvements over the years, batteries still fall short of our needs for electricity storage, especially for uses like electric vehicles and storage of excess electricity from solar and wind power. A new technology for testing a battery's charge and overall health could tell consumers when their batteries need replacing and help researchers more rapidly develop better batteries. The equipment can also detect flaws inside the batteries, helping to avert scenarios such as the unexpected combustion of lithium-ion batteries in hoverboards and certain cellular phones.

Developed by a team led by Daniel Steingart, assistant professor of mechanical and aerospace engineering and the Andlinger Center for Energy and the Environment, the technology uses sound waves to detect the battery's charge and overall health. The technology is being transitioned for use in battery manufacturing plants at a startup known as Feasible, formed by Steingart with his graduate students and postdoctoral researchers.

The IP Accelerator Fund will enable Steingart to demonstrate definitively that the battery-testing system, called Electrochemical Acoustic Time of Flight, can detect signs of failure in lithium-ion batteries. "We want to prove beyond any doubt that this patented Princeton technology is capable of quickly detecting this potentially explosive condition on every lithium-ion cell produced," Steingart said.

The quest to secure computers against cyberattacks is sometimes described as an arms race: Hackers eventually find a weakness in each new security measure, leading to a new solution and a new round of hacking in a never ending cycle.

A novel approach called TrustGuard aims to break this cycle. Recognizing that vulnerabilities will always exist, TrustGuard vets all communications coming from a computer system before they are transmitted. The device consists of a simple component called the Sentry that can be added to any existing system. What is more, the Sentry can be protected from compromise during its entire lifecycle from manufacturing to delivery and installation.

"With TrustGuard, users are assured of their privacy even when any component of the system is untrusted," said David August, professor of computer science, who developed the technology along with Soumyadeep Ghosh, who earned his Ph.D. from Princeton this month, and graduate student Stephen Beard. The IP Accelerator Fund will enable the team to build more sophisticated prototypes and supporting software with the goal of making TrustGuard accessible for broad usage.

Today's thermostats measure the room's air temperature, not the comfort of the person working in the room. A new sensor that incorporates the transfer of heat that radiates from surfaces — such as cold exterior walls of the building — could help building managers improve the comfort of occupants while also reducing heating and cooling costs.

The technology, the "Spherical Motion Average Radiant Temperature (SMART) building sensor and 3D thermal renderer," combines a surface temperature sensor, which measures the radiant temperature of a solid object at a given location, with a laser-based technology for measuring the room and two small motors that swerve the sensors through space so that they can measure the entire room in three dimensions. The recorded temperatures are then processed digitally to provide a complete picture of the radiant temperature of the room. This can be combined with air temperature to get a more complete picture of a room's comfort level.

The SMART sensor development is being led by Forrest Meggers, assistant professor of architecture and the Andlinger Center for Energy and the Environment. The sensor can be manufactured for just a fraction of the cost of competing technologies, and could be applicable both to the home user and to industry. "The end goal would be a sleek, compact, marketable product and application package that seamlessly allows analysis of any space," Meggers said.

Diabetes can lead to major health issues, yet many people find it difficult to measure their blood sugar levels due to the pain, cost and inconvenience associated with finger-pricking to draw blood.

Researchers led by Claire Gmachl, the Eugene Higgins Professor of Electrical Engineering, have developed a laser-based system that measures blood glucose levels through the skin, without requiring a painful prick to draw blood. The system, which shines a pulsed, mid-infrared quantum cascade laser on an individual's wrist or finger, has been tested on patients with diabetes with promising results.

The IP Accelerator Fund will enable further research on the system to make it easier to use in clinical and home settings. The team plans to build a next generation prototype with enhancements to the sensor hardware and software. The team also plans to partner with Princeton-area clinics to test the sensor. 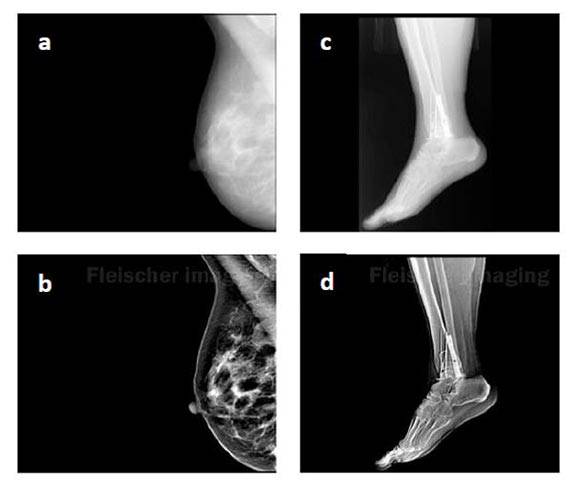 One of the six new technologies supported this year through the University's Intellectual Property Accelerator Fund is one that enhances X-ray images. The image above shows a comparison of a standard X-ray image (top row) and the computationally enhanced version (bottom row). (a,b) Mammogram of potentially cancerous breast. (c,d) Post-surgical image of ankle reconstruction. (Image courtesy of Jen-Tang Lu, Department of Electrical Engineering)

Since their discovery in 1895, X-rays have become an essential tool for diagnosing broken bones, cancer and internal injuries. But X-ray images can be fuzzy and indistinct, which can lead to misdiagnosis and, in turn, unnecessary biopsies and treatments.

Jason Fleischer, associate professor of electrical engineering, and graduate student Jen-Tang Lu are enhancing these images using a technique that relies purely on post-image processing, so it does not require changes to the X-ray machinery or to technicians' techniques. Instead, the technology provides automated image enhancements based on models of physiology, machine learning and the use of a proprietary database of information that is specific to the part of the body and the type of image. The database draws on information provided by physicians and radiologists.

With support from the IP Accelerator Fund, the Fleischer team aims to transfer this technology to clinically relevant settings. While the approach can be used on any type of X-ray, the team is focusing on medical issues, such as tumor identification in ovarian cancer, improved mammogram CAT scans with reduced X-ray dosage, and enhanced imaging of fractures and bone healing.

A promising class of new anticancer agents could help the body fight off the disease by robbing tumor cells of the ability to make proteins and DNA. With funding from the IP Accelerator Fund, researchers led by Joshua Rabinowitz, professor of chemistry and the Lewis-Sigler Institute for Integrative Genomics, are exploring the creation of new small-molecule therapies to treat malignancies.

The anticancer strategy targets certain enzymes that tumors use to make the amino acids in proteins and the nucleic acids found in DNA. The enzymes participate in a series of biochemical reactions known as "one-carbon metabolism" — so named because each reaction involves the transfer of chemical groups containing a single carbon. The Rabinowitz group has discovered that the deletion of certain pairs of these genes, which code for these enzymes, can completely block tumor growth.

The researchers have identified small molecules that could serve as anticancer drugs by blocking the enzymes' functions. With support from the IP Accelerator Fund, the team will modify the small molecules to improve their activity with the goal of eventually providing new treatments for cancer.