As an experienced researcher, Lei Tao knows science and he knows technology. But when stood before a panel of business experts at the Keller Center's Innovation Forum two years ago, he was launching himself into unknown territory.

"It was the first time I appeared before a big audience that had no idea what I was doing," said Tao, an associate research scholar in civil and environmental engineering. "I had to convince them that what we were doing really matters and would make a difference in the world."

Clearly, he succeeded. Tao's three-minute presentation, about a radically new type of environmental sensor, won first place at the 2013 Innovation Forum and received funding that helped turn the lab project into a developing company. Tao, working with Professor Mark Zondlo, has gone on to prepare the sensor for wide distribution as part of a federal Energy Department project. 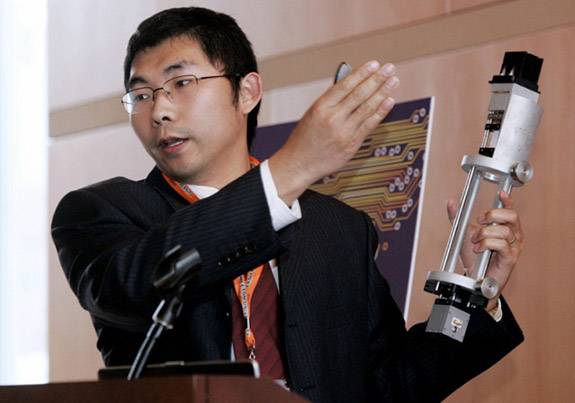 Lei Tao, an associate research scholar in civil and environmental engineering, presents at the 2013 Innovation Forum, which he won with a presentation titled "Fingerprinting the air with portable gas sensors." (Photo by Frank Wojciechowski for the Office of Engineering Communications)

"We just finished phase one, and we are working on deploying it in the field and delivering it to the end user," he said.

That is exactly the intended result of the Innovation Forum, an annual presentation of technology developed by the University's professors, graduate students and researchers, sponsored by the Keller Center and the Office of Technology Licensing. Now celebrating its 10th year, the forum has helped launch a wide range of projects from new biomedical devices to high-tech imagers and cameras. This year's forum, on Feb. 25, included presentations on a new treatment for cancer, a possible solution to widespread water contamination and a type of laser that could diagnose diseases before any symptoms appear.

"It is a way for University researchers to connect with the greater community," said H. Vincent Poor, the dean of the School of Engineering and Applied Science and the founding director of the Keller Center. He said the central purpose of the forum, and the Keller Center itself, has been to forge new connections between engineering, the liberal arts and the world beyond the University. New ideas highlighted in the forum have become "the type of things that Keller has become famous for," he said.

Mung Chiang, the current director of the Keller Center, said the goal of the forum is connect Princeton innovators with a broad community and to facilitate the spread of beneficial technology beyond the University.

"There are many ways to measure the success of a program like the Innovation Forum," said Chiang, the Arthur LeGrand Doty Professor of Electrical Engineering. "I think, overall, we are looking for ways to translate fundamental research into societal impact."

The news includes many stories about the crumbling infrastructure across the country, from sagging bridges to beat-up highways. A team at Princeton might not be able to solve these problems, but they are working on a method to give local governments warning before aging structures seriously deteriorate and fail.

Led by Branko Glišić, the team is developing sheets of sensors able to monitor large areas of structures for stress and damage. Low-powered and practically zero-maintenance, the sensors can quietly check the condition of a bridge and sound the alarm before it fails.

"They are like sensing wallpapers," said Glišić, an assistant professor of civil and environmental engineering. "They can be glued over a structure and are able to sense every point over a large area." 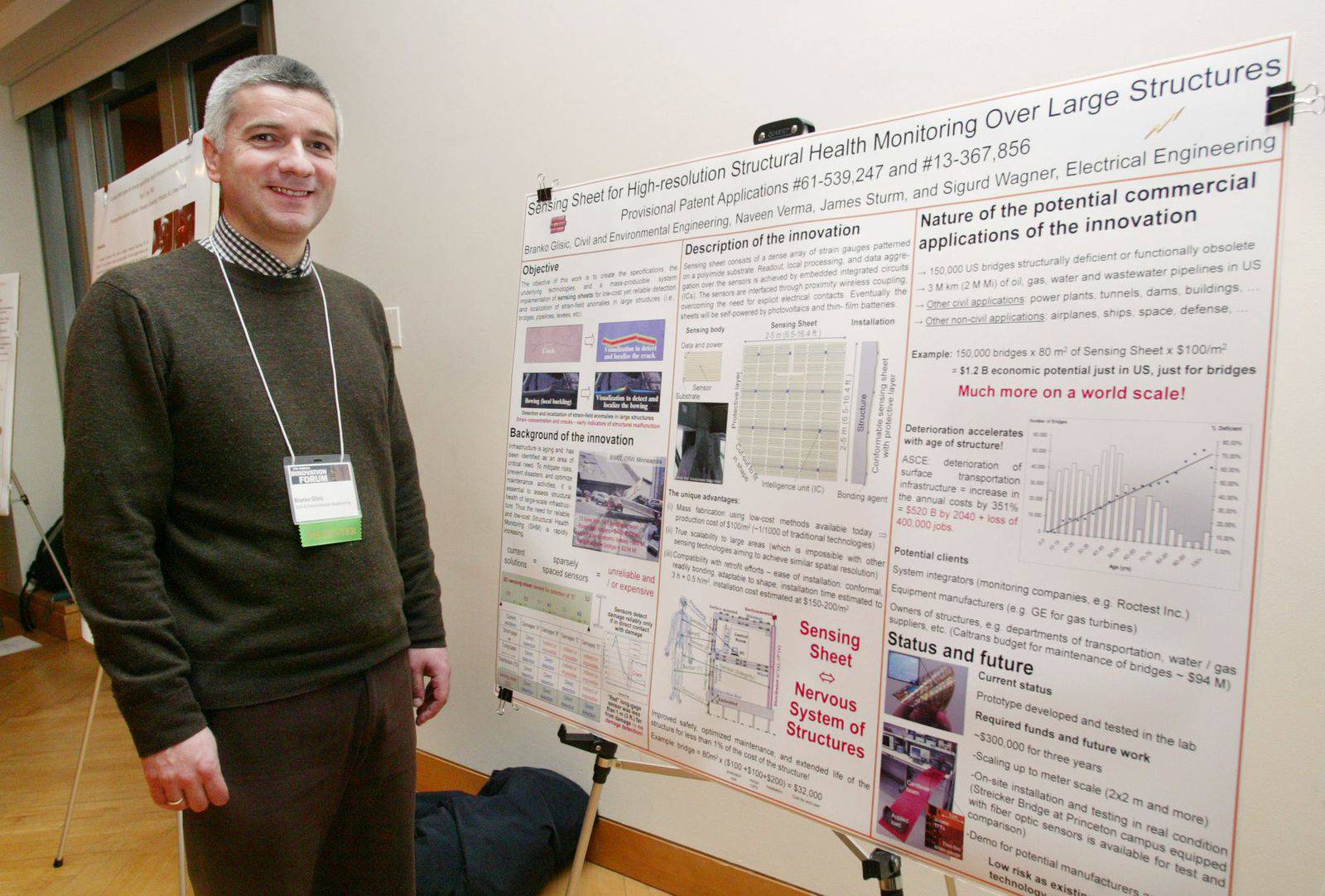 Branko Glišić, assistant professor of civil and environmental engineering, won the Innovation Forum in 2012 with a technology for monitoring the health of large structures. (Photo by Frank Wojciechowski for the Office of Engineering Communications)

"Winning the forum and attracting the attention of a wider group was, for us, confirmation that we were on the right path," Glišić said.

Scientists know that greenhouse gases such as carbon dioxide can be a big problem, but tracking many kinds of specific emissions is trickier than most people know. Often, the only way to look for the gases is to take thousands of snapshot measurements and follow up with painstaking data analysis.

Zondlo, an associate professor of civil and environmental engineering, had a better solution. Working with Tao, he developed a sensor that can measure real-time gas emissions for a variety of sites. For the first version, they are working on a device that measures nitrous oxide, a powerful greenhouse gas typically emitted by agriculture.

Tao won first place after presenting the project to the eighth annual Innovation Forum. Although the team had been working on the project for some time before, he said the presentation provided a needed boost. Since the presentation, the researchers have teamed up with Southwest Sciences Inc. and received a $1.72 million grant from the Department of Energy to further develop the technology and deploy sensors in the field.

"It was very helpful to work with people who knew how to work on startups," he said. "It showed me how to look at my research from a different point of view." 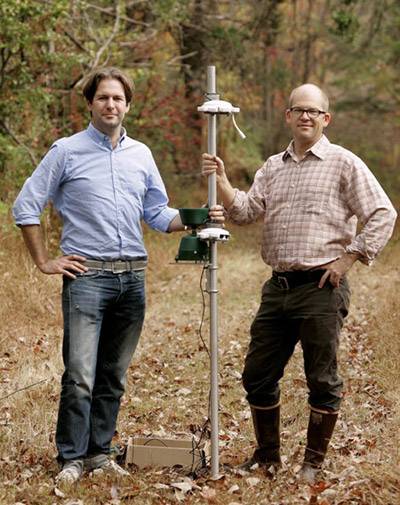 Kelly Caylor (left), associate professor of civil and environmental engineering, and postdoctoral researcher Adam Wolf took third place in this year's event with a plan to market a device that helps farmers monitor crops and make decisions. (Photo by Frank Wojciechowski for the Office of Engineering Communications)

High-tech data for an ancient field

An idea originally intended to help subsistence farmers in the developing world could end up improving farm conditions everywhere. Kelly Caylor and Adam Wolf began working on a cheap, portable environmental sensor because they could not find a similar device for use in their research. Wolf, an associate research scholar in ecology and evolutionary biology, was working on a prototype when he began teaching a class with Caylor, an associate professor of civil and environmental engineering.

The two got together to produce Pulse Pod — a sensor about the size of a household smoke detector that can measure a variety of crop conditions such as soil moisture. The low-powered sensor is easy to deploy and to use, and transmits its data on the system used for telephone text messages. Although the team originally thought of the device as a way of measuring conditions in the developing world, they quickly realized it also would be a great benefit to any farmer that needed specific, high-quality data about a crop or a field. The team won third place in this year's Innovation Forum, and Caylor said that presenting the project to a team of business experts was a valuable experience.

"The challenge of trying to articulate your vision of a company, and a new technology, in less than three minutes is terrifying," he said. "I have built a career out of talking about one idea for years, and I had to learn to talk about many ideas in very few minutes." 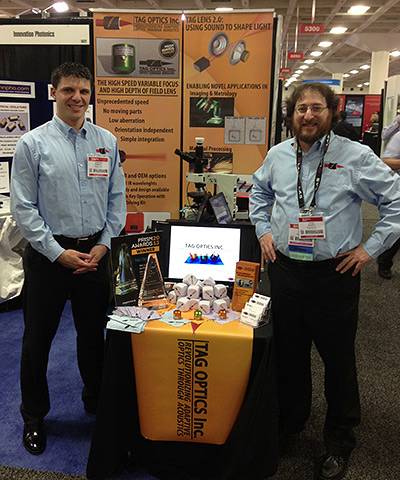 Princeton graduate Christian Theriault (left) and Craig Arnold, a professor of mechanical and aerospace engineering, started a company called TAG Optics Inc. to commercialize a new kind of microscope lens that focuses in response to sound waves. Above, they exhibit their new technology at the Tag Optics booth at Photonics West, the largest annual photonics industry gathering in North America. (Photo courtesy of TAG Optics Inc.)

Imagine a lens that repeatedly shifts focus faster than the eye can blink, so fast that a camera can produce fully three-dimensional images in the time a standard lens uses to take a snapshot. That technology grew out of research into sound waves that Professor Craig Arnold and Adam Hopkins, an undergraduate, conducted in 2005. The researchers knew that light bends as it enters liquids of different density, essentially turning into a lens. By shifting the density of the liquid by hitting it with calibrated sound waves they could rapidly shift focus.

Hopkins went on to earn a Ph.D. from Princeton, and Arnold, a professor of mechanical and aerospace engineering, continued to pursue the research. He teamed up with Princeton graduate Christian Theriault to found TAG Optics, which shipped its first product in 2011 and today sells lenses that can focus 700,000 times per second.

Arnold credits the team's win at the sixth annual Innovation Forum with helping get the company off the ground.

"I think it was our first real injection of funding, which was an absolutely fantastic thing," he said. "It allowed us to get out there, to better commercialize the product, to attend trade shows. It really allowed us to grow."