“There is definitely a renaissance, if you will, of recognizing the importance of not just foundational science but also the technological innovations that can lead to changes that impact the world,” said Arnold, a professor of mechanical and aerospace engineering and the director of the Princeton Institute for the Science and Technology of Materials (PRISM). 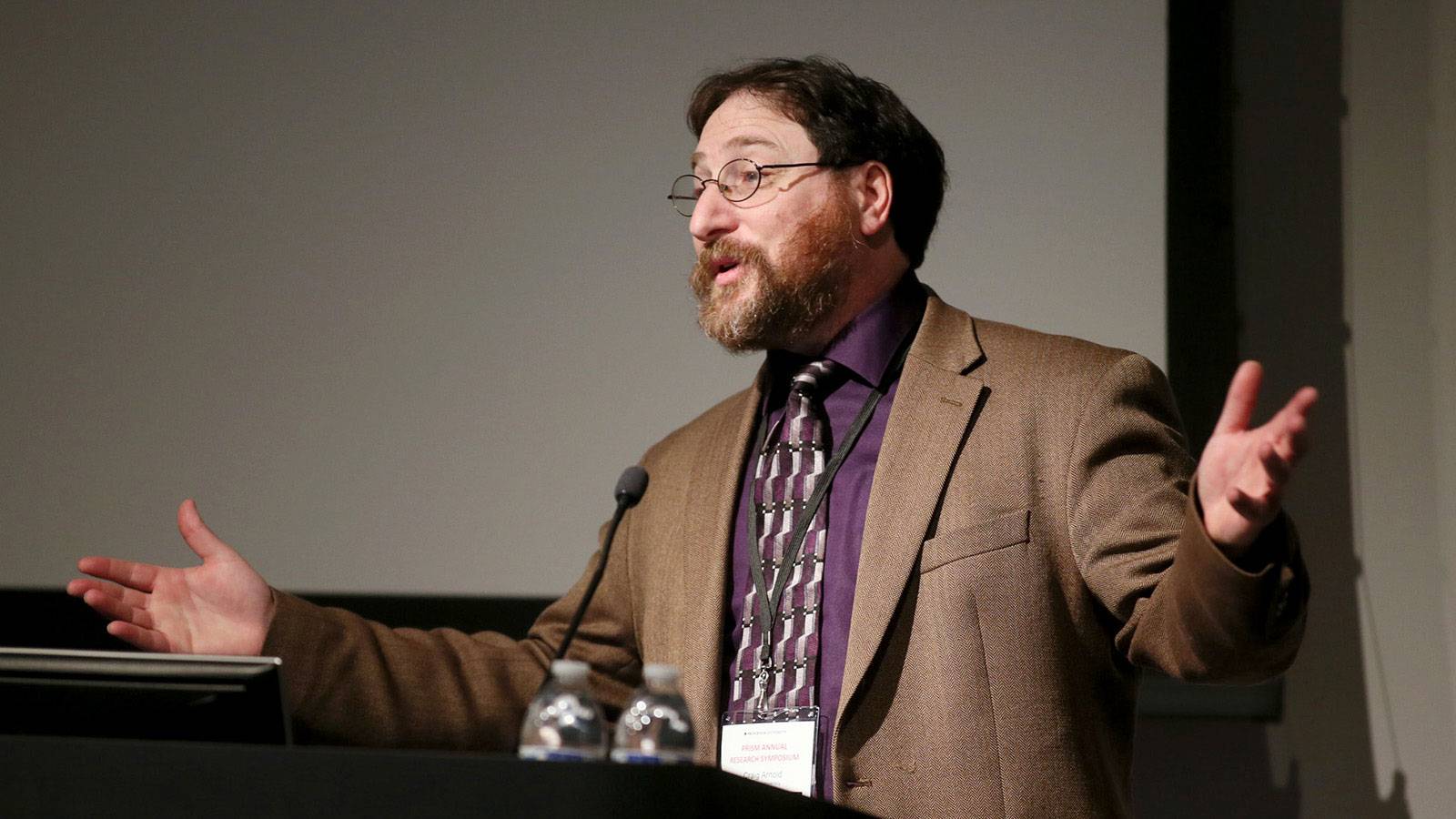 Craig Arnold, director of the Princeton Institute for the Science and Technology of Materials (PRISM), gives the welcoming remarks at the start of the institute's research symposium on March 13.

The two-day symposium, celebrating 30 years of work by PRISM and its predecessor institutions at Princeton, featured research presentations by faculty members and associated researchers, and a poster session highlighting ongoing projects by PRISM research teams.

Deborah Prentice, the University provost, joined Arnold in welcoming participants to the symposium. She said Princeton has a great legacy of innovation and that the University is committed to expanding that legacy.

“PRISM is a nexus that brings researchers together from across the campus,” said Prentice, the Alexander Stewart 1886 Professor of Psychology and Public Affairs. “It is a leader in forging new and vital collaborations.”

The symposium’s keynote address was delivered by Steve Abramson, the president and CEO of Universal Display Corporation. The company, based in Ewing, New Jersey, stemmed from Princeton research into organic light-emitting diodes. Twenty years later, Universal Display Corporation has roughly 200 employees and a market valuation of about $6 billion. It works with partners around the world on consumer electronics, smartphones, smart watches and televisions.

“Our partnership with Princeton has been integral to building the foundation for our growth,” said Abramson, who said the company continues to maintain its relationship with the University.

Assemblyman Andrew Zwicker told the audience that fostering cooperation between industry and academia will be critical for New Jersey’s growth. Zwicker, chair of the Assembly’s Science Innovation and Technology Committee, said New Jersey has a long history of technological innovation, including Thomas Edison’s Menlo Park headquarters and Bell Labs. With the highest density of scientists and engineers in the country, “we are set up to be an innovation state,” he said.

“The challenge that the state has and the University has is: What can we do to rekindle that?” said Zwicker, who heads the science education department at the Princeton Plasma Physics Laboratory.

Zwicker said the new governor, Philip Murphy, supports efforts to build the state’s technical base. He said his committee will also be taking steps to that end.

“There is a new focus in the state on recapturing our innovation economy,” he said. 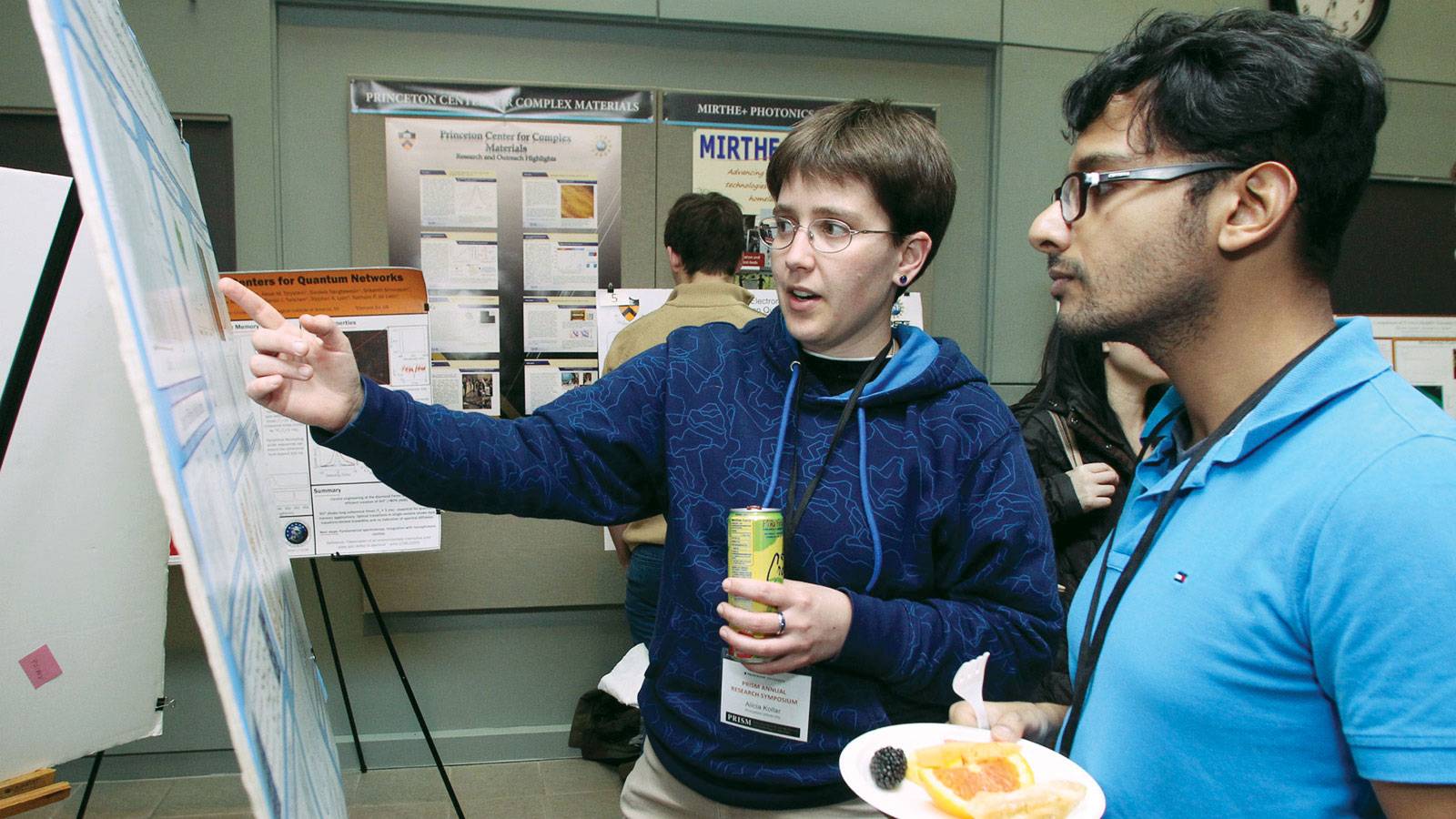 The symposium opened the morning of March 13 in the Princeton’s Maeder Hall. In addition to speakers from industrial, academic and government labs, the symposium featured presentations of faculty research, including an overview of quantum cascade lasers by Claire Gmachl, the Eugene Higgins Professor of Electrical Engineering; plasma-based intense x-ray lasers by Julia Mikhailova, assistant professor of mechanical and aerospace engineering; the design of hyperuniform materials with novel properties by Salvatore Torquato, professor of chemistry and PRISM; and a view of nanomedicine and its potential benefits for global health by Robert Prud'homme, professor of chemical and biological engineering.

The symposium’s agenda also included a roundtable discussion on technology transfer and entrepreneurship, and continued March 14 with sub-sessions on optical sensing, high-power lasers and laser-matter interactions, and laser photonics and on-chip biomedical sensing, including a system for testing blood glucose levels with a laser instead of drawing blood.

Alumnus Christian Theriault recounted his work with Arnold on a new type of microscope lens that focuses in response to sound waves. That work led to the company TAG Optics Inc., of which Theriault is CEO and co-founder.

Theriault, who earned both undergraduate and graduate degrees at Princeton, remembered giving a presentation on their research at a forum in 2010. An audience member, he recalled, contacted the University asking how they could buy a TAG lens. “We had our first purchase order,” he said. “We had no choice, we had to start a company.”

For details on the presentations, see the March 13 and March 14 agendas.