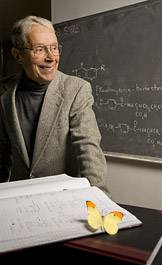 Edward Taylor(Photo illustration: Denise Applewhite)Taylor earns ACS accolades by Hilary Parker Princeton chemist Edward Taylor, whose discoveries led to the development of the blockbuster anti-cancer drug Alimta, has been inducted into the New Jersey Inventors Hall of Fame and chosen to receive the 2010 Alfred Burger Award in Medicinal Chemistry from the American Chemical Society. Taylor also will be inducted into the ACS Division of Medicinal Chemistry Hall of Fame next year. Taylor, the A. Barton Hepburn Professor of Organic Chemistry Emeritus, received a special recognition for his accomplishments at the Dec. 18 "Celebrate Princeton Invention" reception. Taylor's achievements, according to Princeton University President Shirley M. Tilghman, offer up an ideal case of what can happen when the efforts of high-level basic researchers are combined with inspired leadership from industry and government. "There is no better example of how this kind of partnership plays out for the benefit of humankind," Tilghman said during the event. "I hope all of you know the wonderful story of Ted's intellectual curiosity about a chemical that led ultimately to the discovery that the chemical inhibited the growth of mammalian cells, which led to a very long partnership with Eli Lilly that ultimately led to FDA approval of an anticancer drug called Alimta that today is prolonging and saving the lives of cancer victims." Taylor, who spent more than four decades on the Princeton faculty, transferred to emeritus status in 1997. As a graduate student at Cornell University, he found himself fascinated by reports of a compound obtained from spinach and liver that had a unique chemical structure with a nucleus previously only observed in the pigments of butterfly wings.  Read more about Taylor's work.

The University's rich research tradition and guiding spirit of intellectual curiosity was celebrated Friday, Dec. 18, at an event that showcased faculty members' cutting-edge ideas in a broad range of disciplines.

The inaugural event, titled "Celebrate Princeton Invention," acknowledged the achievements of more than 300 faculty members, research professionals and students for breakthroughs and applications. The occasion also underscored the appeal those ideas might hold for a broader audience, drawing a crowd of more than 200, including representatives from the financial and business sectors.

"What we are celebrating today here in a very old building -- Chancellor Green -- is what has come before and what will come in the future as represented by the work that is going on here at Princeton by our brilliant faculty," said Princeton President Shirley M. Tilghman, kicking off the event. She heaped praise on Edward Taylor, the A. Barton Hepburn Professor of Organic Chemistry Emeritus, for his discoveries that led to the development of the best-selling anti-cancer drug Alimta. And she lauded his long-term collaboration with the pharmaceutical firm Eli Lilly and Co. as the quintessential example of an academic-industrial partnership. 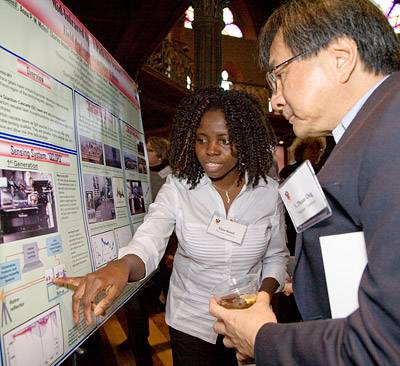 As the centerpiece of the event, about a dozen Princeton faculty, collaborators and students stationed themselves at kiosks in the building's rotunda with posters, samples and electronic displays conveying the details of their inventions to those strolling by. Over the course of the three-hour event, faculty members honed the descriptions of their inventions in repeat presentations. John Groves, the Hugh Stott Taylor Chair of Chemistry, discussed HepatoChem, a new way of processing drug compounds.

"The liver has evolved an array of enzymes that usually incorporate oxygen atoms into drug compounds to make them more soluble in water," Groves explained to visitors. "We've learned how these enzymes work and created synthetic versions that we apply all at once. After we've quickly homed in on the ones that are working, we can make and use more of them to screen a given compound. The interesting thing is that's just how the liver works -- it allows the body to produce more of whichever enzymes are required for a given drug. We can do the same thing."

The event also gave faculty a chance to reflect on the thrill of discovery itself.

"I tell people there are three ways of doing good science, good engineering," said Claire Gmachl, a professor of electrical engineering who was exhibiting data on her highly power-efficient quantum cascade lasers and quantum cascade laser-based sensor applications. "The first is to be the best scientist or engineer you can be, analyzing the problem and chipping away at it with thorough work until you find the best solution. The second one is going back to basics and questioning long-held beliefs. And the third way is that you're just plain lucky."

John Ritter, the director of Princeton's Office of Technology Licensing and Intellectual Property, said he expected the event to become an annual one and hoped it would serve a dual purpose. "We are here to celebrate the inventions resulting from the outstanding research across campus," he said. "We are also here, however, to recognize our collaborators in the business and investment community and their role in bringing these inventions to commercialization."

As it was the first event of its kind for the University, it drew hopeful but curious visitors.

"I have to say that I didn't know what to expect and that I am pleasantly surprised," said Steven Piccoli, a scientist who works in translational biomarkers for Johnson & Johnson in New Brunswick, N.J., as he looked over the crowd. "This is really an amazingly fortuitous convergence of industry, pharma, academia and biotech that should allow us to advance each of our respective businesses."

Piccoli, who earned his Ph.D. from Princeton in molecular biology, said he came hoping to find new ideas in diagnostic testing, his area of expertise. He was not disappointed. He found at least three real possibilities, he said after talks with faculty, that may lend themselves to some sort of partnership. 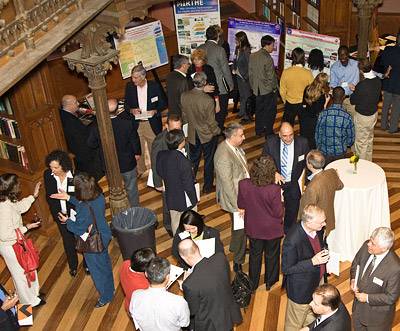 A crowd of more than 200, including representatives from the financial and business sectors, attended the "Celebrate Princeton Invention" event in Chancellor Green on Friday, Dec. 18. (Photo: Denise Applewhite)

Mario Casabona, the principal of Casabona Ventures LLC in Cedar Grove, N.J., which specializes in early stage "angel" investment capital, said he viewed the gathering as an event he couldn't miss. Princeton's legendary research culture, he said, has long been beneficial for society. Its ideas, he added, also can be "vital to economic development" if developed and supported in the proper way.

Timothy Teen, the chief executive officer of InSitech Inc., a technology firm based in Dover, N.J., came to support collaborators at the Princeton Plasma Physics Laboratory who were displaying a device that detects nuclear radiation. But he was also on the lookout for other inventions that could offer ideas for new lines of business. "This is a great opportunity to network with Princeton scientists," Teen said. "There is an incredible pedigree here for quality ideas."

Sparking these kinds of connections is just what the University is hoping for, according to A.J. Stewart Smith, Princeton's dean for research. "We think there are some really exciting germs of invention around here -- some of them are not all that obvious yet," Smith said. The idea, he said, would be to forge partnerships where "if you take the risk with us, we can really, possibly go on to greater glory together."

The University has reorganized its research management, he said, and now houses all of its main aspects -- technology licensing and intellectual property, corporate and foundation relations, and grants and contracts management -- within his office. "If anyone wants to speak to us, we can speak with one voice," Smith said. "And we really encourage you to come."

Such welcoming statements are sure to be a boon to the University, according to Greg Olsen, a pioneer in the sensors industry and in space travel who is the entrepreneur-in-residence at the University's School of Engineering and Applied Science.

Olsen said that a company he co-founded, Sensors Unlimited, benefited greatly during its early days from collaborations with Princeton's researchers in materials science. "Sensors Unlimited got a lot of help from Princeton," he said. "We want to see that happen for other entrepreneurs, as well." It's the only way, he added, that Princeton can spur the creation of its own type of Silicon Valley.

Others agreed that the affair represented an important step for the University.

"It was an eye-opening event where I was impressed by the interdisciplinary collaboration at Princeton that is producing innovative solutions" to significant problems, said Gordon Bloom, the Dean's Visiting Professor of Entrepreneurship in the Keller Center for Innovation in Engineering Education. "We need more opportunities to share and showcase the work of our faculty and best students, and to interact with the community outside Princeton that is speeding the implementation of these innovations."

The event was organized by the Office of the Dean for Research and supported by Johnson & Johnson and Pepper Hamilton LLP.

Here are links to profiles of several Princeton University inventors and brief descriptions of their work:

Names: Paul Steinhardt, the Albert Einstein Professor in Science and director of the Princeton Center for Theoretical Science; Salvatore Torquato, professor in the Department of Chemistry and the Princeton Institute for the Science and Technology of Materials; Marian Florescu, associate research scholar in physics