A nanoscale sensor for environmental monitoring and an implantable medical device to restore brain function after a stroke were two of the research projects with the potential to benefit society that were on display at Celebrate Princeton Invention last week.

The event, held Thursday, Nov. 10, honored over 350 Princeton faculty members, staff researchers and students who over the past year have made discoveries or advances in the natural sciences and engineering that have the potential to be developed into technologies valuable to the public.

Now in its eighth year, the event brings together University researchers with scientists and executives from industry and the investment community who can help transition findings from University laboratories to companies with the expertise to develop them into products and services. 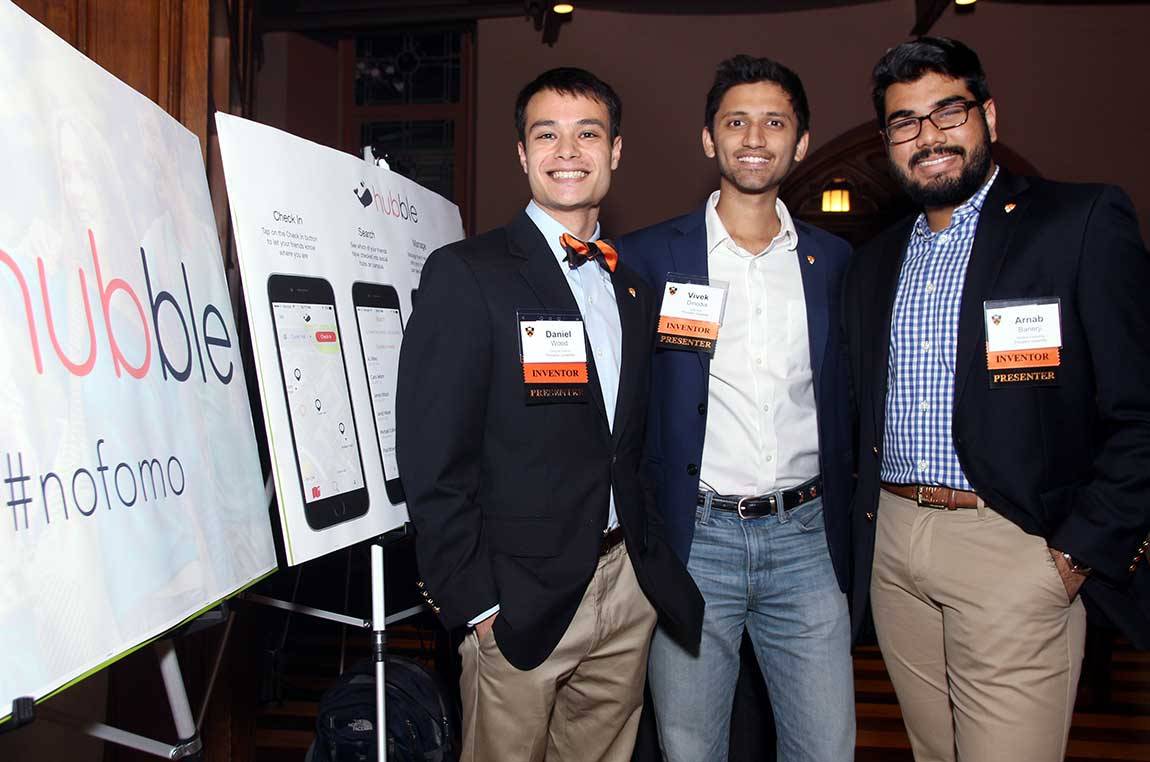 Princeton students, from left, Daniel Wood, Class of 2018; Vivek Dinodia, Class of 2017; and Arnab Banerji, Class of 2019, demonstrate a new social app called Hubble that connects friends on college campuses based on their location. They were among the presenters at the annual Celebrate Princeton Invention event, held Nov. 10 in Chancellor Green. The event honors University researchers who are making discoveries with the potential to benefit society. (Photos by Frank Wojciechowski for the Office of the Dean for Research)

The translation of University research into beneficial technologies is a core part of Princeton's mission, said Princeton President Christopher L. Eisgruber, speaking at the event in Chancellor Green. "Our faculty members have the desire to see the fundamental research that they do have practical applications," he said. "They want to find ways to bring forward into the world the discoveries and insights that can make a difference in people's lives."

Industry collaborations play an important role in assisting this process, Eisgruber added. "By talking to industry scientists, our faculty learn about the kinds of questions that matter in the world." 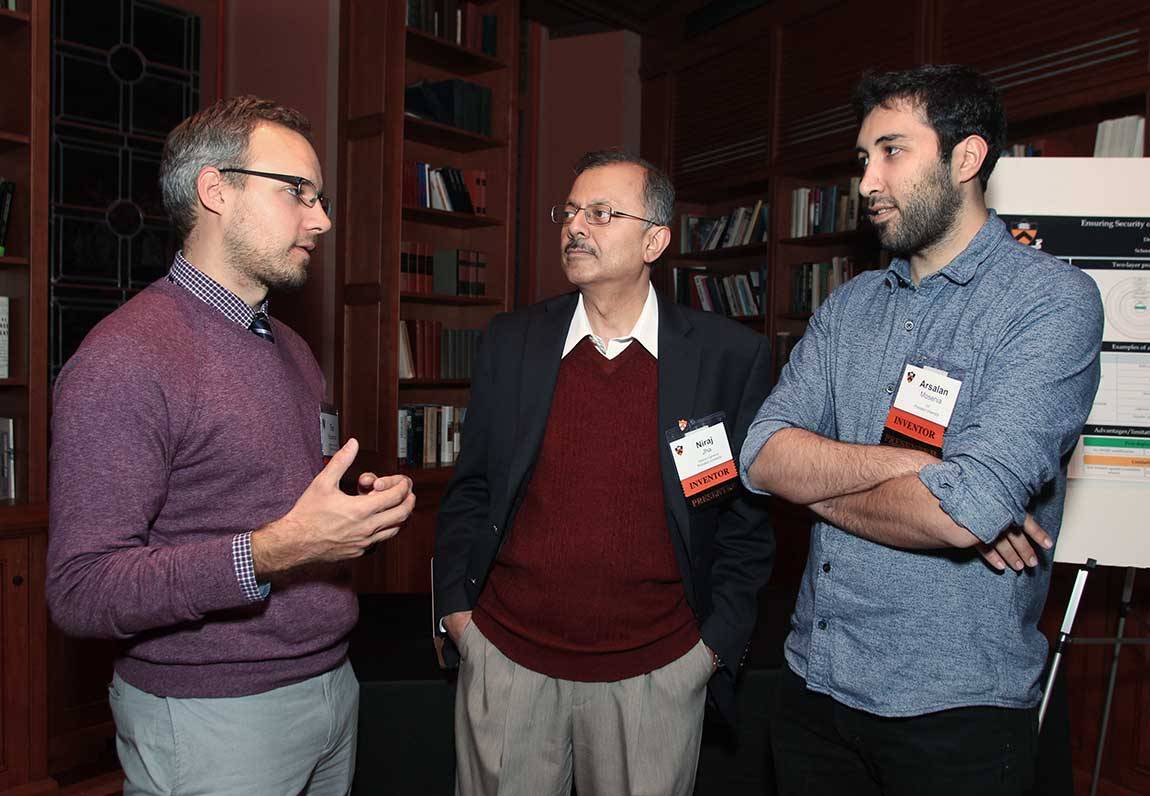 From left: Timothy Buschman, assistant professor of psychology and the Princeton Neuroscience Institute, talks with co-presenters Niraj Jha, a professor of electrical engineering and associate director for education, Andlinger Center for Energy and the Environment, and Arsalan Mosenia, a graduate student in electrical engineering. Jha and Mosenia presented work on enhancing security of implantable and wearable medical devices, and more broadly, the Internet of Things.

Research is one of the ways that Princeton works to fulfill its informal motto, 'In the nation's service and the service of humanity,' said Provost David S. Lee, a professor of economics and public affairs in the Woodrow Wilson School.

"We celebrate the benefit to humanity that starts with the creation of knowledge, and continues with the transfer of that knowledge into life-saving and life-improving technologies," said Lee, who mentioned the role of the Princeton Entrepreneurship Council in facilitating the campus' innovation ecosystem. "We at Princeton, with the help of the business and technology-transfer communities, have a tremendous opportunity to make a profound and lasting beneficial impact on the world."

This beneficial impact has its roots in the creativity of University scientists and their teams, said Pablo Debenedetti, dean for research, the Class of 1950 Professor in Engineering and Applied Science, and a professor of chemical and biological engineering.

"Tonight, as we do every year, we come together to celebrate invention. In other words, we celebrate risk, and we celebrate unpredictability," Debenedetti said. "We applaud those who had the audacity to imagine, the playfulness to tinker, the patience to build and the rigor to test." 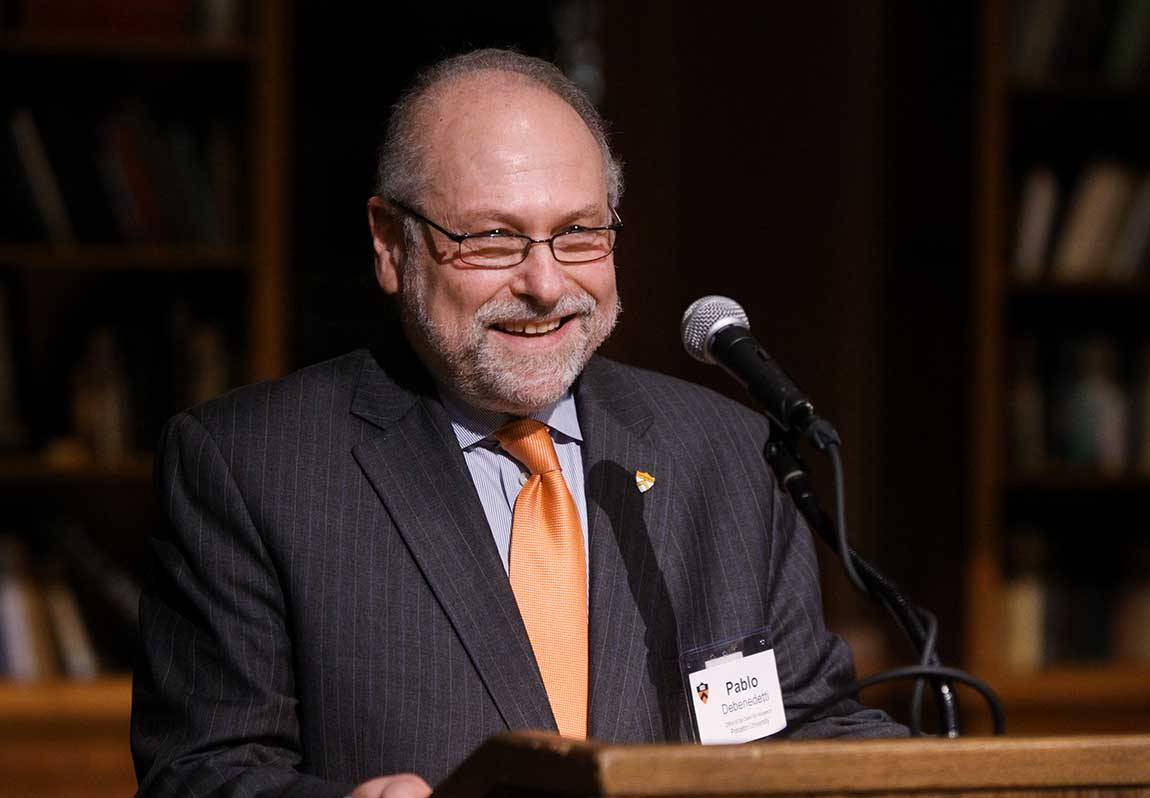 Dean for Research Pablo Debenedetti, the Class of 1950 Professor in Engineering and Applied Science, and a professor of chemical and biological engineering, praised the creative spirit of faculty inventors and their teams.

Over the past several years, the University has increased the resources available to help faculty researchers translate discoveries into industry settings, either by licensing technologies to existing companies or by spinning off technologies into startup companies funded by venture capitalists and other inventors, said John Ritter, director of  Princeton's Technology Licensing office.

"Our office has expanded to provide more comprehensive support to those in the Princeton University community who are interested in translating their ideas into products and services to solve critical societal challenges and unmet needs," Ritter said. "It is an exciting time for inventors and entrepreneurs at Princeton."

Keynote speaker Emily Carter, dean of the School of Engineering and Applied Science and the Gerhard R. Andlinger Professor in Energy and the Environment, praised the University's interdisciplinary approach to solving societal challenges. "Princeton has the best ecosystem in the world in terms of being able to address really thorny problems that require expertise from all sorts of disciplines," she said.

Princeton also benefits from conversations about societal needs with both industry and students, locally and globally, said Carter, who is a professor of mechanical and aerospace engineering and applied and computational mathematics, and was the founding director of the Andlinger Center for Energy and the Environment. "Just as we benefit from reaching out to industry and learning what their problems are," she said, "we also benefit by sitting back and listening to students and understanding what their lives are like so that we can help make the world a better place." 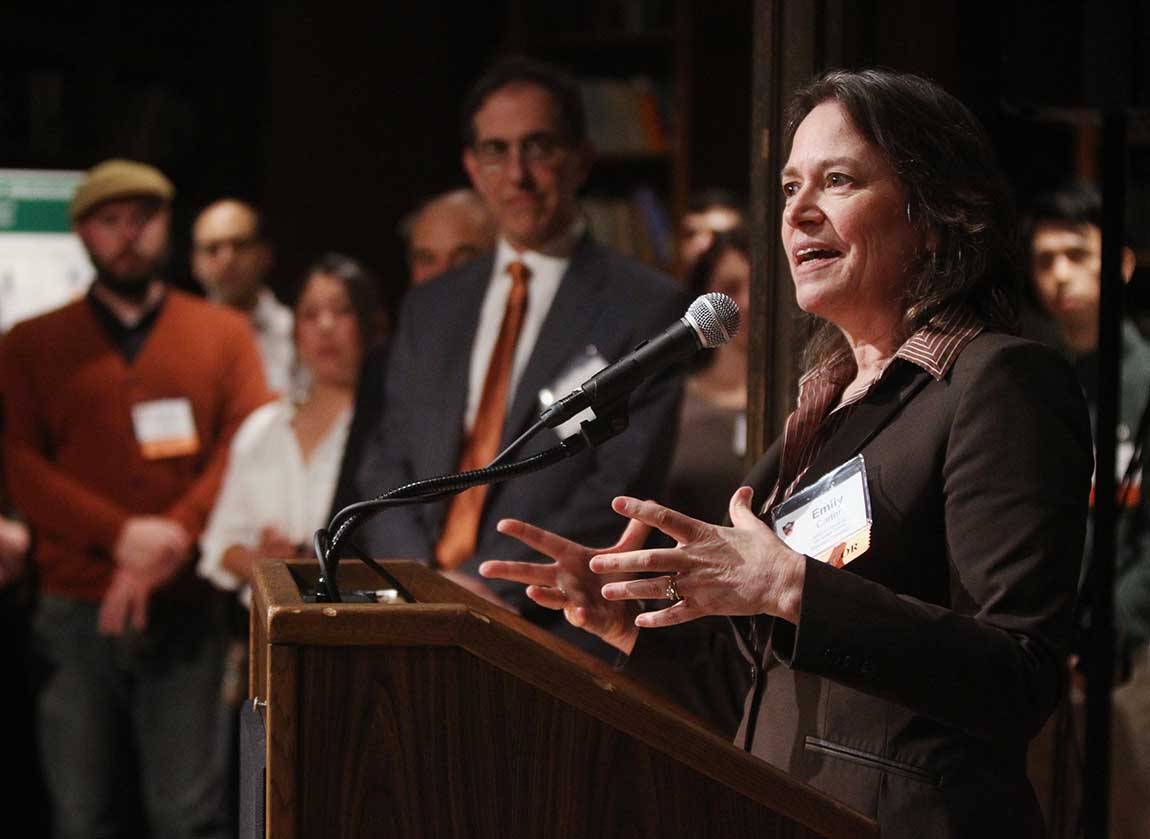 Emily Carter, dean of the School of Engineering and Applied Science, spoke about the several new engineering initiatives, including new fabrication and imaging facilities hosted in the Andlinger Center for Energy and the Environment, and new emphases on bioengineering and smart, resilient cities. Princeton President Christopher L. Eisgruber, shown listening at center, also spoke at the event.

The highlighted inventors and their discoveries are noted below. Articles and videos about each presenter are available at Celebrate Princeton Invention.

Tim Buschman, assistant professor of psychology and the Princeton Neuroscience Institute, and his team invented a device that is implanted in the brain and helps patients recover cognitive function following traumatic brain injury.

Ileana Cristea, professor of molecular biology, and her research team discovered a new way to monitor the activity of mitochondria, the components of the cell that convert food into cellular energy. Her discoveries may lead to ways to treat mitochondrial diseases, cancer and viral diseases.

John Groves, the Hugh Stott Taylor Chair of Chemistry, and his team introduced a new method for selectively adding fluorine to molecules, with potential applications ranging from cancer detection to the production of new agrichemicals.

Marcus Hultmark, assistant professor of mechanical and aerospace engineering, and his team invented a family of small sensors that can provide improved temperature, humidity or fluid velocity measurements, with potential applications including environmental monitoring, medical applications and efficient operation of smart homes.

Niraj Jha, professor of electrical engineering and associate director for education in the Andlinger Center for Energy and the Environment, and his colleagues developed a method for securing components of the Internet of Things — especially implantable medical devices such as pacemakers — against hacking.

Rodney Priestley, associate professor of chemical and biological engineering, and his team found a new way to produce nanoparticles that have two sides, each with its own function, for applications in personal care and targeted drug delivery.

Princeton Plasma Physics Laboratory scientists presented a number of technologies that spun off from the lab's research on fusion energy, an environmentally safe method for making electricity. The technologies included a method for pasteurizing eggs in the shell, a cost-effective device for scanning luggage for radiological weapons, a small and clean nuclear fusion reactor, and a method for producing the world's most widely used medical isotope, Technetium-99m, which is employed in diagnosing brain tumors and heart disease.

Princeton student entrepreneurs presented several companies. These students are participating in the Keller Center eLab Program, which provides students with seed funding, mentorship and coaching through its Summer Accelerator Program and its fall and winter Incubator Program. The companies included: Agitators for Humanity, which aims to provide a cheap, eco-friendly alternative for mosquito control; BoxPower, a self-contained renewable energy system and telecommunication station; Hubble, a social app that connects friends on college campuses based on their location; Revolution Outboards, which designs and manufactures electric engines for watercraft; SignSchool, which provides an online platform for learning American Sign Language; and Thrive+, which offers solutions to counteract dehydration and the aftereffects of alcohol.

The reception was organized by the  Office of the Dean for Research, including a collaborative effort between the staffs of the offices of Technology Licensing and Corporate Engagement and Foundation Relations. Additional support for the event was provided by Merck & Co., Inc.