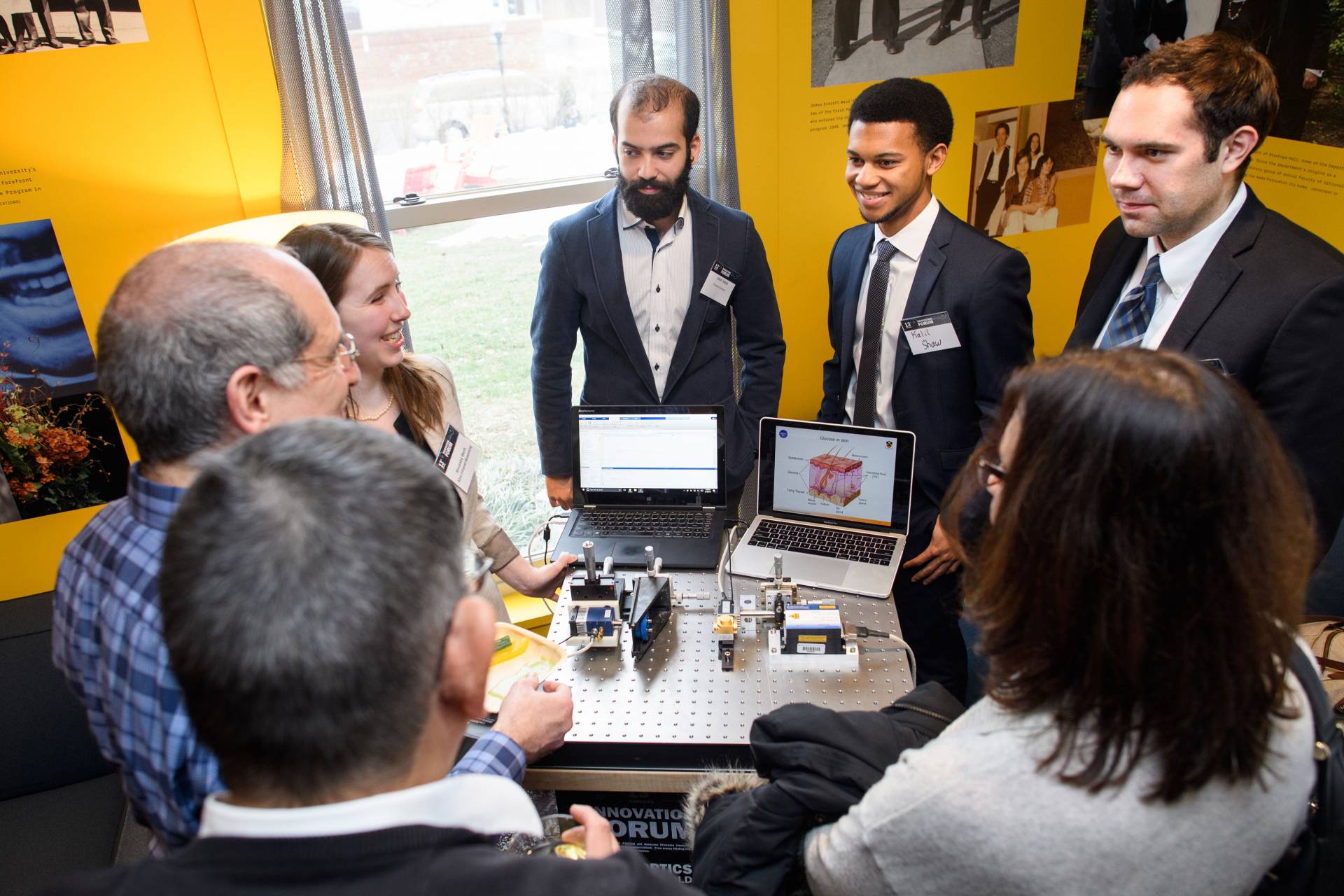 Nine teams competed in this year’s Innovation Forum, which allows Princeton researchers at all levels to display their best technical work, and demonstrates how fundamental research translates into technological innovation. Shown here are members of the Alira infrared biosensing team.

Michael Hvasta gripped the podium at the Keller Center’s Innovation Forum at Princeton University on Wednesday evening, looked over a standing-room crowd and delivered his opening.

“We are going to talk about the future of flowmeters,” he said.

Flowmeters may not be flashy, but they are important. They sit in refineries and breweries and sewer plants and pharmaceutical factories and nearly every other large facility that deals with pipes and production. The meters themselves, not counting the countless industries they support, are expected to grow to a $9 billion market in the next four years.

Hvasta, an associate professional specialist in the Department of Mechanical and Aerospace Engineering, said he and others in faculty member Egemen Kolemen's research group have found a way to make flowmeters less expensive, more efficient and more reliable than industry standard hardware.  A prototype of their flowmeter was successfully tested at the Princeton Plasma Physics Laboratory.

The competition was tough. Other teams displayed methods to improve insulin production, monitor blood sugar with light rather than a pin prick, and develop detailed maps of the brain’s neural connections. 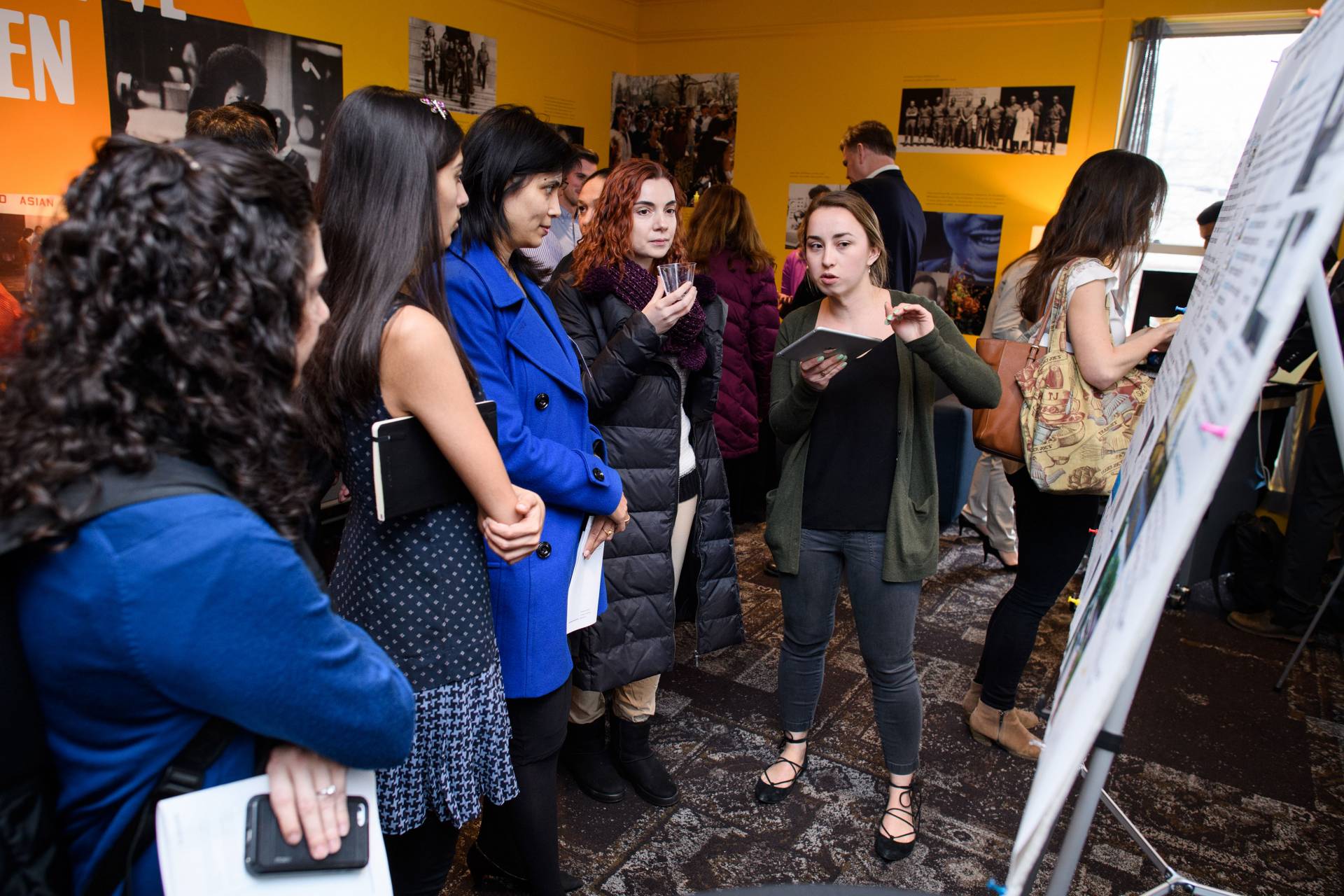 Through its various programs, the Keller Center, which sponsors the Innovation Forum, attracts students and faculty from all parts of the University to demonstrate their work.

Margaret Martonosi, the director of the Keller Center for Innovation in Engineering Education, told the audience of about 200 that the Innovation Forum, sponsored by the center, allows researchers at all levels to display their best technical work, and demonstrates how fundamental research translates into technological innovation. Through its various programs, the Keller Center attracts students and faculty from all parts of the University, Martonosi said, and the Innovation Forum reflects this breadth of interest.

“We appreciate that innovation comes from all corners of this campus,” said Martonosi, the Hugh Trumbull Adams '35 Professor of Computer Science.

John Ritter, the director of the University’s Office of Technology Licensing and Intellectual Property, said there has been a growing interest in entrepreneurship on campus. In his introductory speech at the forum, he noted that Princeton spun out 10 new ventures in 2017. The University has worked to foster the enthusiasm with efforts such as a new wet-lab incubator, and an executive-in-residence program to provide expert advice for researchers.

“These resources have dramatically improved our capabilities and are accelerating the pace of creation of spin outs looking to develop and transform Princeton basic research into innovative products,” he said.

The Innovation Forum plays an important role in that system. Competitors briefly pitch their ideas to a panel of experts who ask questions and offer advice and feedback. The top three entrants, selected by the panel, split $30,000 in funding to further develop their ideas.

The second-place winner in this year’s competition was PhotoPharma, which is developing a method to use light in protein purification and the creation of chemicals used in pharmaceuticals, food and skin- care products. In third place was a team that has developed nanoparticles that allow for the delivery of next-generation antibiotics based on peptides. 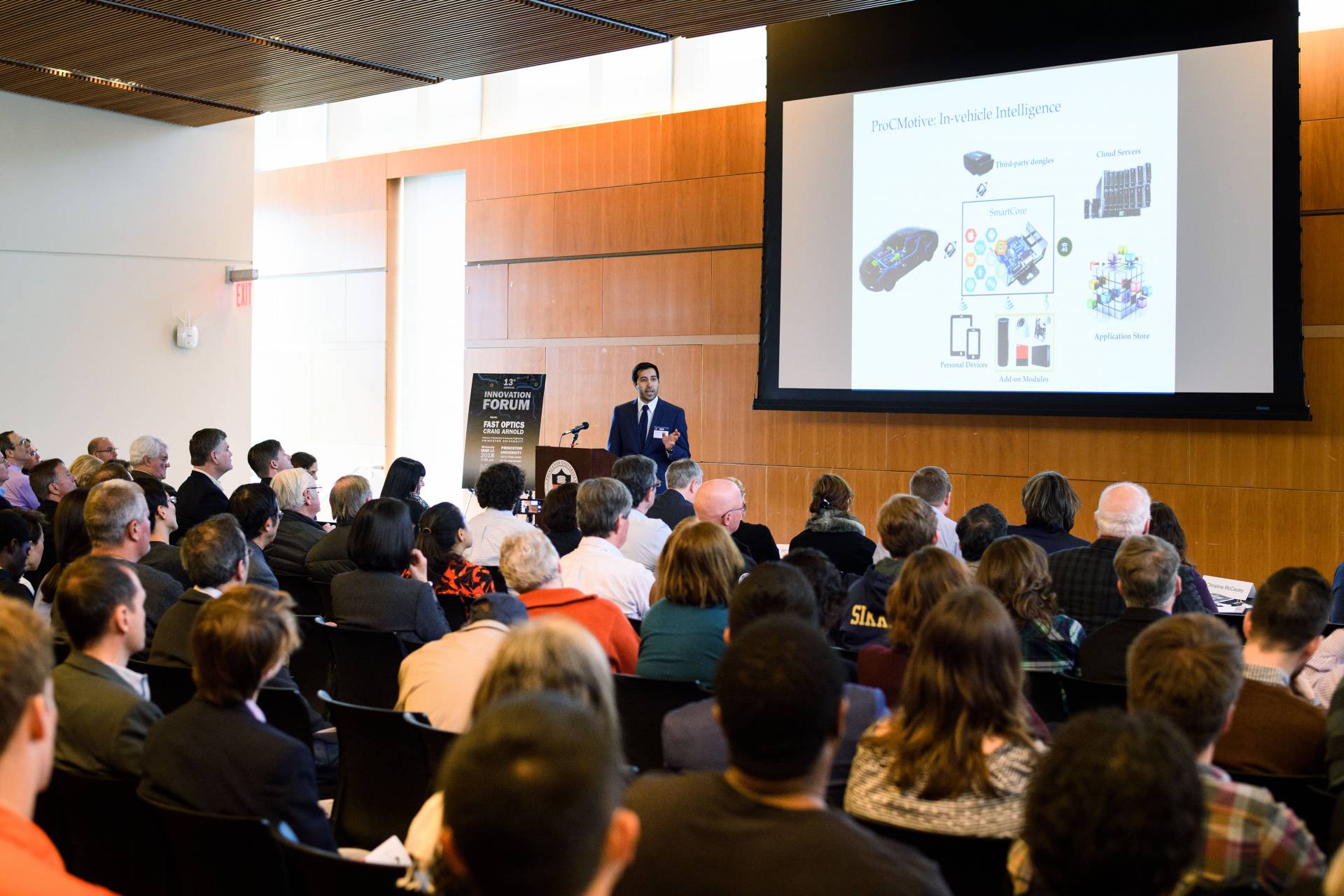 Arsalan Mosenia, a postdoctoral research associate in electrical engineering, talks about the work of the ProCMotive team in deploying apps for vehicles not already equipped with smart-driving technology.

Craig Arnold, a professor of mechanical and aerospace engineering, delivered the forum’s keynote address. Arnold co-founded his own company after making an initial pitch at the 2007 Innovation Forum. The team returned to the forum to win first place in 2011. Since then, the company, TAG Optics, has become a leader in ultra-high-speed lenses.

Arnold, who is the director of the Princeton Institute for the Science and Technology of Materials, said there were many factors that led to the company’s success, among them a strong team, persistence and hard work. But he said success would not have been possible without a firm understanding of the fundamental science behind their technology, which uses sound to rapidly shift the focus of the TAG lens.

“Since we had developed the science, we were in a strong position to do the engineering development that is necessary for a commercial product,” he said. 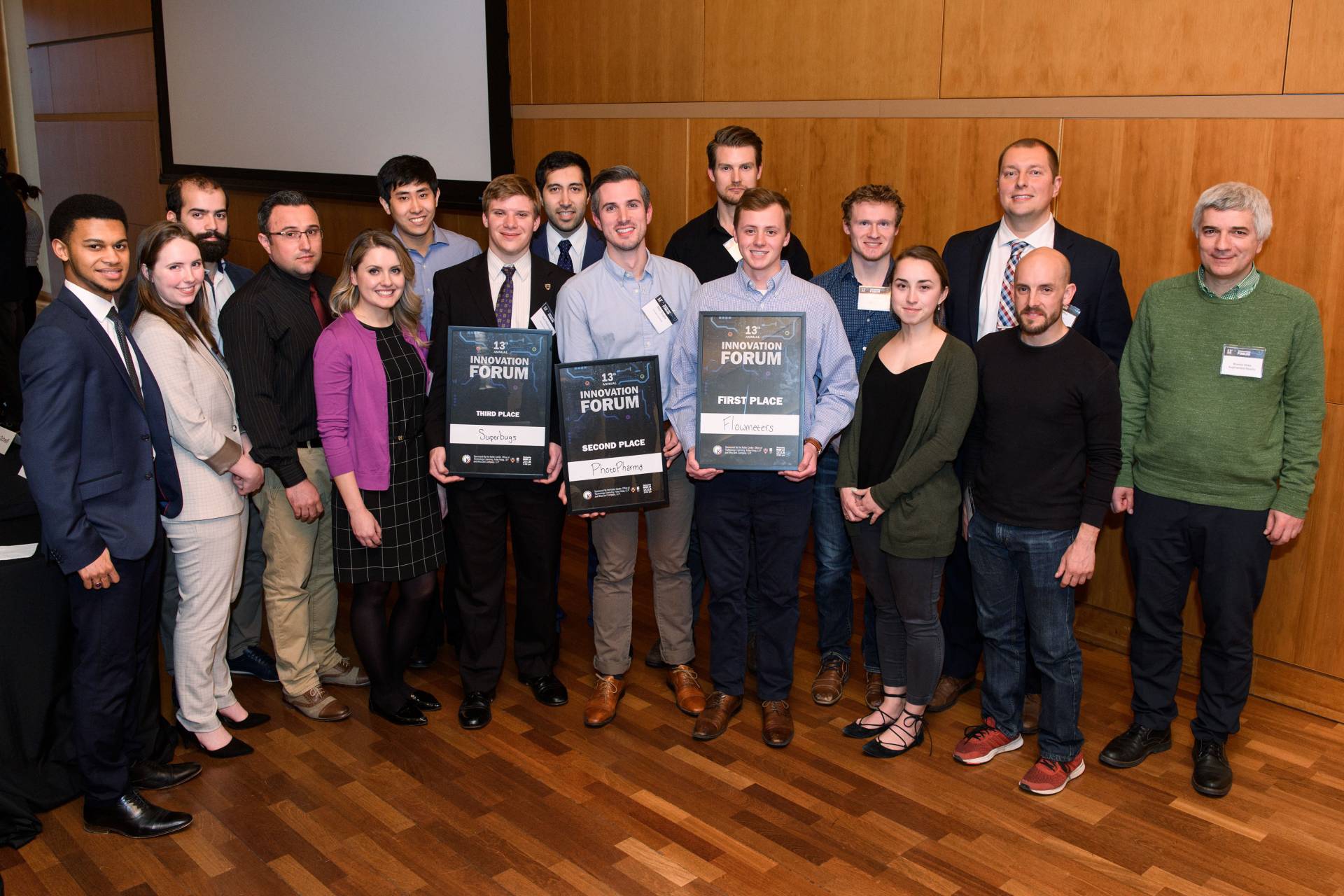 Participants in the 2018 Innovation Forum who are part of the top three winning teams.

The teams and Innovation Forum participants (not necessarily all researchers involved in a project), in order of presentation, included:

The team is developing a non-invasive sensor that can measure an array of biomarkers, including glucose in blood or in other substances. The detector uses a mid-infrared quantum cascade laser. The team said the technology makes it possible “to detect biomarkers in situations not previously thought possible.” They said it would be possible to develop the technology for medical use, such as blood-sugar monitoring for diabetics, and for commercial processes such as winemaking.

The team has developed augmented-reality software that allows engineers, contractors and public policymakers to easily visualize health and performance data about structures. The system works with existing data sets as well as monitoring systems. It is designed to allow multiple groups to easily prioritize infrastructure work rather than rely on complex and unwieldy reports and data.

The team behind DEEP, for De Novo Expression Enhancer Proteins, has developed a new system for the production of recombinant proteins or peptides. DEEP uses a collection of synthetic genes to improve the production of specific proteins and intends to apply the technique to the production of insulin. Initial results suggest it should be possible to increase both yields and purification while cutting costs.

A rotating Lorentz-force flowmeter can be used to measure the flow of electrically conductive liquids. The device is installed external to pipes; it prevents system downtime during installation and enables operation with high-temperature or corrosive liquids. Its low-friction bearing allows it to operate without calibration and at a wider range of flow rates than comparable devices. It is also markedly less expensive than standard systems.

The team uses light to control protein activity in living cells. The application has potential to greatly improve the industrial-scale process of protein purification and the manufacture of pharmaceuticals, food and skin-care products.

The team has developed a sensor that measures oxygen exhaled by patients, rather than the carbon dioxide measured by most systems that analyze a patient’s breath. Team members noted that oxygen measurements give a more complete assessment of respiratory and metabolic functions. The device, the Faraday rotation oxygen sensor, is compact, light and compatible with existing systems from leading medical equipment manufacturers.

A new generation of antibiotics made from chains of amino acids called peptides are effective against antibiotic-resistant bacteria, but they are difficult to administer and require multiple injections. The team’s technique, HIP-FNP, protects peptide antibiotics in the body, resulting in fewer required injections and a lower dosage. The technique is scalable to industrial production and loses almost no drug during production. The team has used the system with eight peptide antibiotics so far, and has entered a proof-of-concept program with a major pharmaceutical manufacturer.

The team has developed a framework that allows for the deployment of apps to improve the performance and security of vehicles that are not already equipped with smart-driving technology. Installing the system would allow drivers to take advantage of apps designed to improve fuel efficiency and emergency response. It would also allow drivers to use other apps for fleet management, urban planning and environmental monitoring.

Researchers in the laboratory of H. Sebastian Seung, the Evnin Professor in Neuroscience and professor of computer science, have developed an automated system to map neural connections in the brain. The connections are incredibly complex and the Zetta AI system drastically cuts the amount of time needed to translate many individual images into a complete map. The team intends to offer its services to other neuroscience labs around the world to process images with a goal of achieving a better understanding of neural systems in the brain.

The Innovation Forum is sponsored by the Keller Center in conjunction with the Office of Technology Licensing and Intellectual Property, and Wiss & Company LLP. Judges for this year’s event included: Nena Golubovic of IP Group; Christine McCauley and Ken Kilgore of Janssen Pharmaceuticals; Erika Smith of ReNetX Bio; Tom Vander Schaaff of Edison Partners; and Debra Yu of China Renaissance.