Researchers unveiled technical advances such as a portable device that could reduce injuries, costs and pain associated with intravenous injections and a power architecture that slashes data centers’ electric bills at Princeton University’s 14th annual Innovation Forum on Wednesday, Feb. 27.

Taking the stage at Maeder Hall after a parade of presentations of new technologies, keynote speaker Zakiya Smith Ellis, the New Jersey secretary of higher education, said the presentations illustrated the key role that colleges and universities can play in sparking a resurgence of technical advances in the state.

“New Jersey is the state of innovation, and higher education is where opportunity meets innovation,” said Smith Ellis.

In her address, Smith Ellis said the state must foster both innovation and access to higher education for all citizens if New Jersey is to prosper. The modern, technical economy rewards a highly educated workforce, she said, and New Jersey has an obligation to prepare all its citizens to share in the benefits of innovation without overburdening them with debt.

“The challenge is present and pressing,” she said.

The forum, organized by the Keller Center for Innovation in Engineering Education, showcases talent from across the University, said Margaret Martonosi, the Keller Center director. The nine teams represented collaborations among different academic disciplines and among graduate students, senior researchers and faculty members, as well as undergraduates.

“Keller serves as a bridge across this campus,” said Martonosi, the Hugh Trumbull Adams '35 Professor of Computer Science. She said that Keller hosts classes and instruction in a wide range of disciplines. Entrepreneurship programs, including the Innovation Forum and the eLab summer business accelerator, play prominent roles in the University’s innovation ecosystem.

The Innovation Forum also serves to demonstrate Princeton’s ability to move scientific advances from the lab to the economy. Many companies that have participated in the program have become successful business ventures, nonprofits and social programs.

“The breadth of technologies you are going to hear about is remarkable,” Martonosi said. 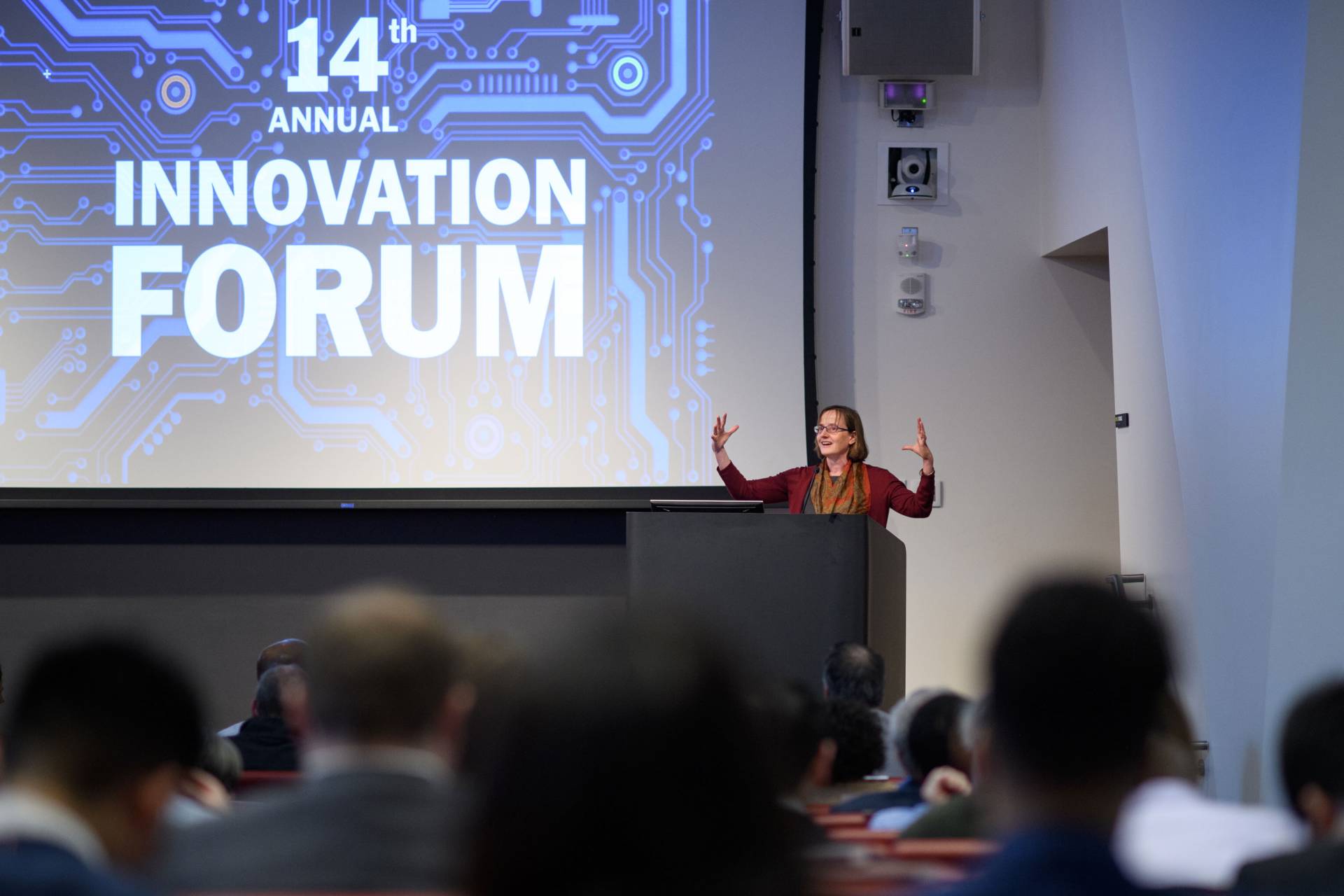 Margaret Martonosi, director of the Keller Center for Innovation in Engineering Education, welcomes attendees. The Keller Center organizes the forum, which showcases talent from across the University. Martonosi is the Hugh Trumbull Adams '35 Professor of Computer Science.

This year’s winning entry proposed to restructure power supplies at gigantic data centers that serve as the backbone of modern cloud computing. These centers — often windowless buildings holding racks of computer servers, consume 90 billion kilowatt-hours of electricity each year in the U.S., generating as much atmospheric carbon dioxide as the entire U.S. airline industry, the researchers said.

A Princeton team’s device restructures the way power is distributed among the computers in a data center. A current data center only delivers about 66 percent of the power it draws from the grid to its computers, the researchers said. The rest is lost to the system used to balance the power among and inside individual computers. By increasing the efficiency of the system, the researchers say they can increase the amount of power delivered to the machines to 88 percent.

The team said their technology would work with solar farms and battery storage systems as well as data centers.

“We look forward to bringing this solution to the real world,” said Youssef Elasser, a team member and a graduate student in electrical engineering.

The second-place winner in this year’s competition was a team using ultrasound to produce high-quality medical images, such as mammograms, that can assist with diagnoses in ways not currently available using sensors including MRI and X-ray. Two teams tied for third place. One, VITA, is developing an automated system to deliver medical injections to patients; by eliminating human error, the team plans to reduce infections and injuries, while reducing patients’ pain. The other team plans to genetically measure dogs’ friendliness using a simple mouth swab; a possible market for the technology is the service dog industry where expensive training often is invested in dogs that turn out not to have the correct temperament.

The teams, in order of presentation, included:

As more health care data becomes available from nontraditional sources such as smartphones and wearable devices, it offers great benefit to researchers and doctors. Properly used, the data from multiple data sets could lead to medical advances, improve treatment and avoid problems like adverse drug reactions. But using the data also poses challenges for protecting participants’ privacy. Jemison is developing algorithms that are designed to protect that privacy with mathematically provable guarantees, while maintaining high-quality data for researchers.

As solid structures wear, they suffer tiny cracks that emit a characteristic sound that can be detected by special microphones. Most of the microphones currently used rely on crystals to function but the crystals, Carlsson said, can be damaged by high temperatures or radiation. As an alternative, Carlsson has developed a microphone based on ionized gas (or plasma) that can sustain both high temperatures and neutron exposure. He plans to develop the microphones initially for high-value structures such as nuclear plants, and later for infrastructure, including bridges. 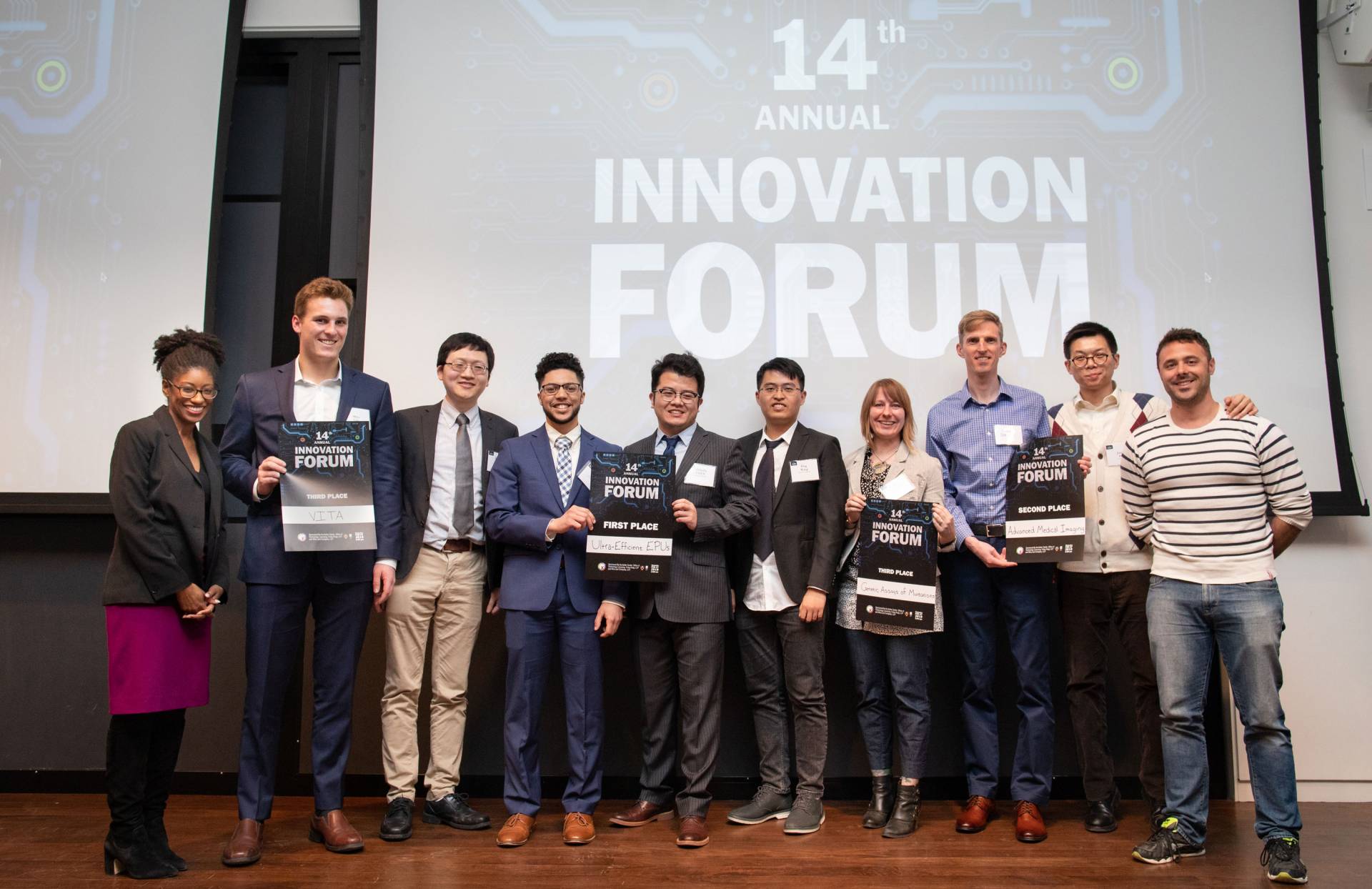 Smith Ellis (left) joins the winners on stage at the conclusion of the event. Nine teams presented their new technologies, representing collaborations across disciplines and among graduate and undergraduate students, senior researchers, and faculty members.

Khodak has developed a flow meter that can be clipped onto the side of a gas pipe either in an industrial facility or in a home. Khodak said there are currently no simple flow meters that can measure a gas without installation inside the pipe. The external model is cheaper, easier to use and can be used in systems that are not practical to open either because the tester does not own the pipe or the gas is hot or hazardous. The flow meter uses a small heater and measures the gas’ ability to transfer heat away from the heater as a way to track its flow rate. The meter can both measure flow and alert the owner to leaks.

Scientists have identified genes in canines, including dogs and wolves, that are associated with an increase in sociability with humans. The team has developed a test that uses a mouth swab to determine whether a dog has a genetic predisposition to friendliness. In her presentation, vonHoldt said the test could be particularly useful to breeders of service dogs because the training is expensive and has a high failure rate. Besides helping to determine which puppies would be most suited for training, the test could also help shelters match dogs with prospective owners.

To both balance light exposure in building and prevent heat loss, the IRiS team has developed a system of small sheets that fit over windows and shift their position to follow the sun throughout the day. Inspired by the movements of the Stylidium flower, the sheets require no external mechanism to shift their positions. The researchers have developed algorithms that allow them to calibrate the sheets’ movement to diffuse the light entering a building while reducing glare for occupants. The system has potential to reduce energy costs and increase comfort, Charpentier said.

One of the technical challenges of balloon-borne scientific projects is the construction of the gondola, which holds the scientific equipment and connects to the balloon. Science teams often build the gondolas from scratch, which means high costs and potential failures. The General Gondolas team proposes to provide custom building and launch services to scientific ventures. As the market grows, Li says, the team plans to expand to nonscientific ventures and space platforms.

At the Princeton PowerLab, the team has developed a new type of power electronics device, the Energy Processing Unit, which supplies power to computing units with extremely high efficiency. Because the EPUs are compact and efficient, the team believes they will cut electricity use by data centers without requiring as much space as current systems. The team believes it can cut data center costs substantially and can apply to technology to other high-power uses including solar farms and grid-level battery storage systems. 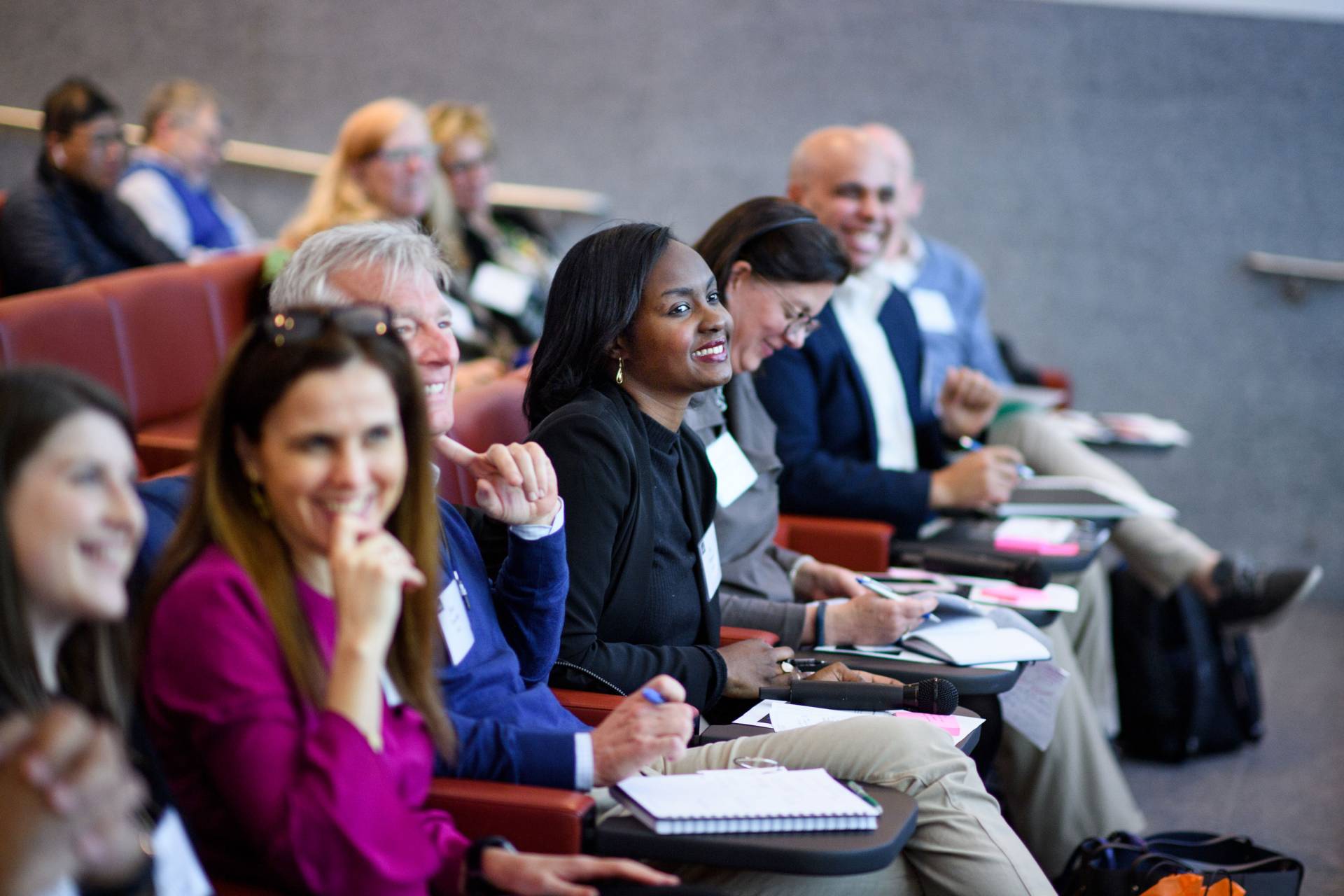 A panel of five judges from a range of business and investing backgrounds asked questions of each of the presenters and deliberated to choose first, second and third-place winners.

The team harnesses techniques used for oil and gas exploration and scales them for medical uses. The system couples the speed and safety of ultrasound with the high-quality images of techniques such as MRI and X-ray. Because the new technique can measure tissue characteristics including stiffness and density, it can be used as a diagnostic tool in ways that other imaging cannot. The team believes their technology can increase the accuracy of diagnoses and decrease the need for invasive testing.

Miles Cole, undergraduate Class of 2021, Craig Arnold, professor of mechanical and aerospace engineering and director of the Princeton Institute for the Science and Technology of Materials

Telling the story of his own hemophilia and the injections it requires, Cole said the U.S. spends $3 billion a year due to infections and injuries related to medical injections. The team is developing a robotic system to wrap around a patient’s arm and deliver a precise injection without injury. The device uses infrared optics to map blood vessels and tactile sensing to inject and hold the needle steady during the procedure. The system uses custom needles but is designed to work with the patients’ syringes. The team is in the design stage and hopes to have a working device by the end of the summer.

The Innovation Forum is sponsored by the Keller Center in conjunction with the Office of Technology Licensing, and Wiss & Company LLP. Judges for this year’s event included: Paul Chamberlain, Class of  1985, an early-stage investor and adviser to senior executives in emerging technology companies; Deborah Hoover, president and CEO of the Burton D. Morgan Foundation; Jake Leschly, Class of  1988, former president and CEO of Ingenuity Systems before its acquisition by Qiagen; Darrell Penn, 1999 graduate alumnus and director of corporate development for Merck and Co.; and Isa Watson, founder and CEO of Squad by Envested.