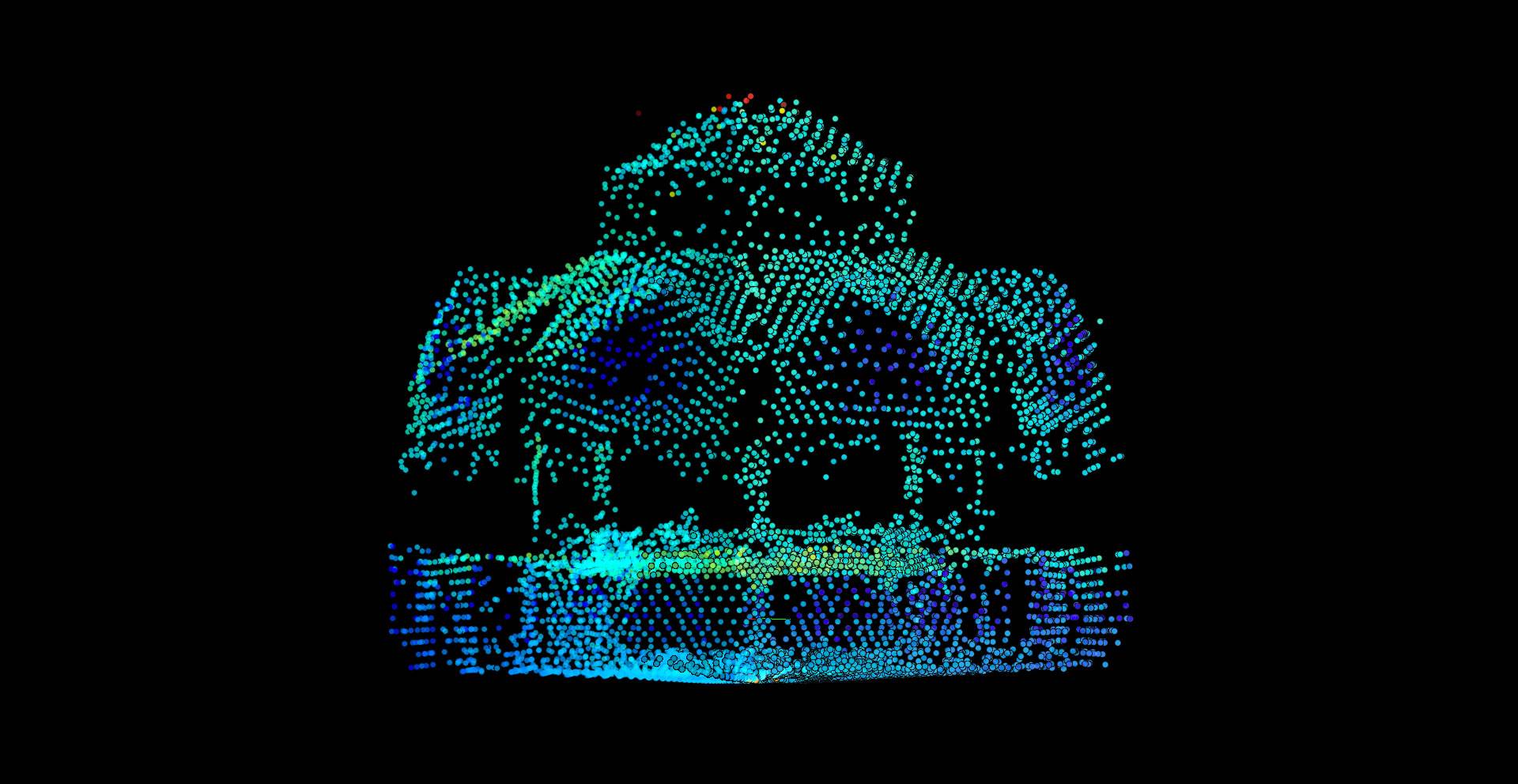 The annual Celebrate Princeton Invention reception honors faculty members and their teams whose research has the potential to benefit society. One of those inventions showcased Nov. 9 was a new temperature sensor that enables energy-savings while improving human comfort was one of the technologies on display. The SMART (Spherical Motion Average Radiant Temperature Sensor) device creates a three-dimensional map of a room that indicates what temperature a person would feel when standing in various locations around the room. When placed in a room, the sensor rotates 360 degrees to capture temperature readings from points at specific distances. These points are represented in this scan of the octagonal Chancellor Green rotunda seen from the side.  A prototype of the sensor is being developed by Forrest Meggers, assistant professor of architecture and the Andlinger Center for Energy and the Environment, whose team members include graduate student in architecture Eric Teitelbaum and researcher Nicholas Houchois.

A sensor that measures surface temperatures to improve indoor heating and cooling was one of several inventions on display last week at Princeton's annual Celebrate Princeton Invention reception.

The evening honors faculty members and their teams who are creating technologies with the potential to benefit society. Held Thursday, Nov. 9, the event brought faculty, staff and student researchers together with members of the entrepreneurial community to highlight technologies with applications in medical testing, drug discovery, energy efficiency and other fields.

"We are here tonight to celebrate invention and discovery," said Pablo Debenedetti, dean for research, the Class of 1950 Professor in Engineering and Applied Science, and professor of chemical and biological engineering. "We honor risk and unpredictability, and we celebrate vision and persistence. We admire inspiration, but we also recognize the fact that knowledge pays off in unexpected ways, and that the journey from research to impact can follow many paths."

The event is hosted by the Office of the Dean for Research with leadership from Associate Dean for Research Karla Ewalt along with John Ritter, director of the Office of Technology Licensing, which helps connect industry investors and entrepreneurs with technologies invented at Princeton, and Coleen Burrus, director of Corporate Engagement and Foundation Relations, which builds collaborations with companies and foundations to support programs and research across all academic areas. Support for the reception was provided in part by Merck & Co. Inc.

The journey from university laboratory to widespread impact often involves partnerships with industry, said keynote speaker Debbie Hart, president and CEO of BioNJ, the life sciences trade association for New Jersey. "Academia plays a key role in bringing new treatments and cures to patients around the globe," Hart said. Directing her comments at the Princeton faculty, students and staff, she said: "I commend you on what you are doing to get research out where it can impact and save lives. What you are doing makes a difference."

The reception also highlighted the Princeton Entrepreneurship Council, which coordinates entrepreneurship programs across the University. One new initiative is an incubator for startup companies that will be open to those affiliated with Princeton as well as members of the wider New Jersey innovation community. The 31,000-square-foot facility will feature wet lab and dry lab space as well as offices and meeting rooms, and will be located at Princeton Forrestal Center in nearby Plainsboro.

"Our mission is to engage the Princeton entrepreneurial ecosystem through educational programming, mentoring and funding in collaborative spaces," said Anne-Marie Maman, executive director of the council. "Along with many partners throughout the Princeton campus, we are creating entrepreneurship 'the Princeton way.'" 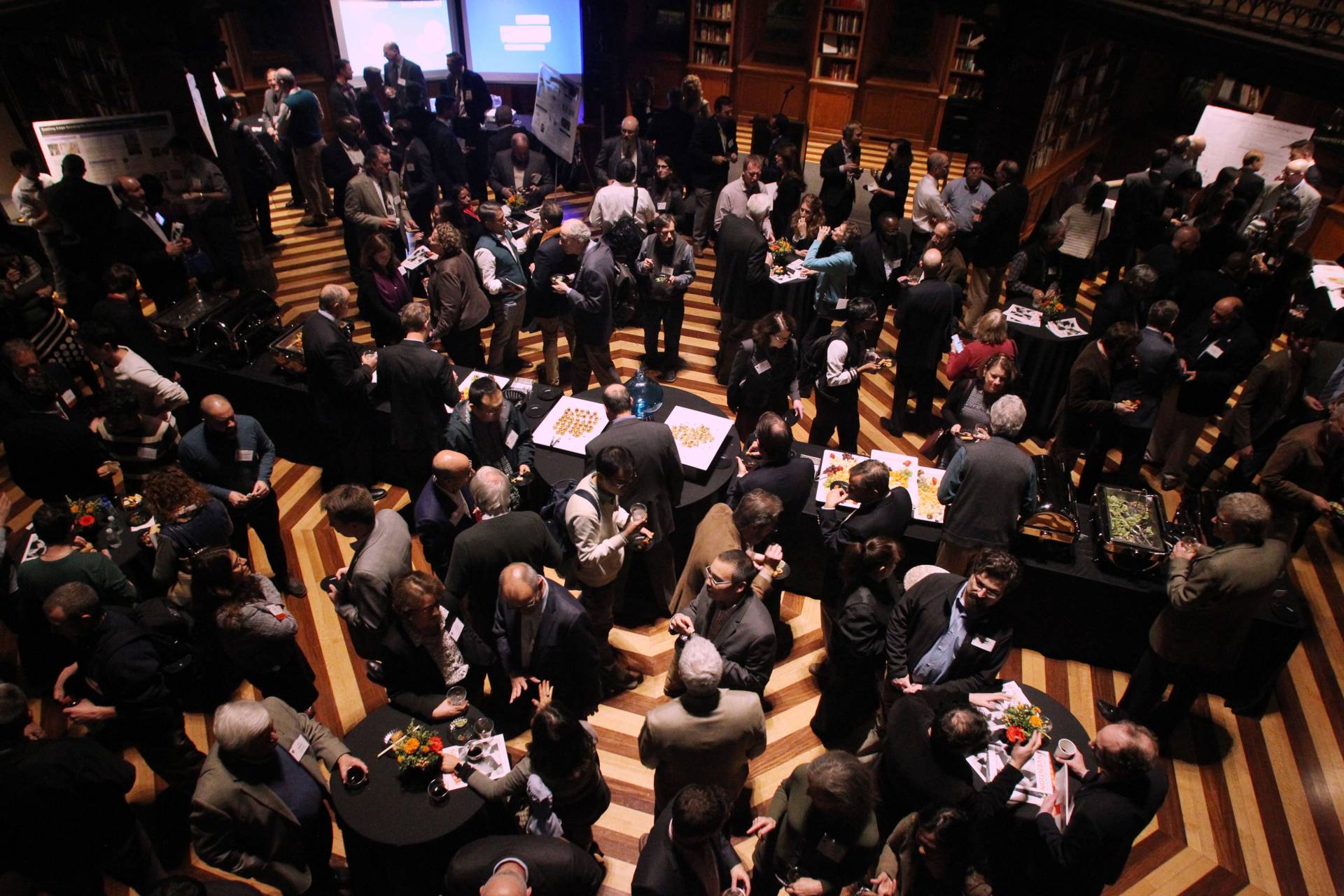 The event highlighted six projects among the many that come out of Princeton laboratories and working spaces each year. In addition, the celebration featured student-led startup companies working with Princeton's Keller Center, which provides mentoring and education in entrepreneurship through its eLab accelerator program. The Princeton Entrepreneurship Council presented four winning teams with inaugural Tiger Entrepreneur Awards, which will be awarded annually to teams or individuals who demonstrate success in entrepreneurship. The award is designed to celebrate the value of entrepreneurship and innovation across the Princeton community and to emphasize the University’s commitment to entrepreneurship ‘the Princeton way.’”

The six faculty-led projects were:

José Avalos, assistant professor of chemical and biological engineering, and his team are using light to ramp up the production of biofuels such as methanol. By shining light on yeast growing in a bioreactor, the team can turn yeast genes on or off, with the goal of optimizing the production of fuels, therapeutic drugs or other chemicals.

A smart sensor for indoor spaces

Forrest Meggers, assistant professor of architecture and the Andlinger Center for Energy and the Environment, and his team are developing a simple and cost-effective sensor, known as SMART (Spherical Motion Average Radiant Temperature Sensor), that can measure surface temperatures at multiple locations in a room, facilitating the design of energy-efficient spaces that are sensitive to human comfort.

Herschel Rabitz, the Charles Phelps Smyth Professor of Chemistry, is leading a team that develops algorithms to optimize the formulation of therapeutic drugs and to aid in drug discovery. The method helps researchers explore and discover ideal combinations of ingredients that can maximize the benefits of medicinal therapies.

A biosensor for low-cost medical testing

Kaushik Sengupta, assistant professor of electrical engineering, and his team are perfecting a low-cost, silicon-based diagnostic chip that allows the simultaneous analysis of multiple molecular signatures from pathogens. Unlike conventional tests that require special equipment and skilled personnel, the biosensor chip requires little to no training and performs complex analyses at very low cost.

Jeroen Tromp, the Blair Professor of Geology, and his team are applying computational methods originally developed for oil and gas exploration to the creation of high-quality medical ultrasound images. These images contain far more information than traditional, grainy ultrasound images at costs that are much lower than advanced techniques such as magnetic resonance imagery (MRI). 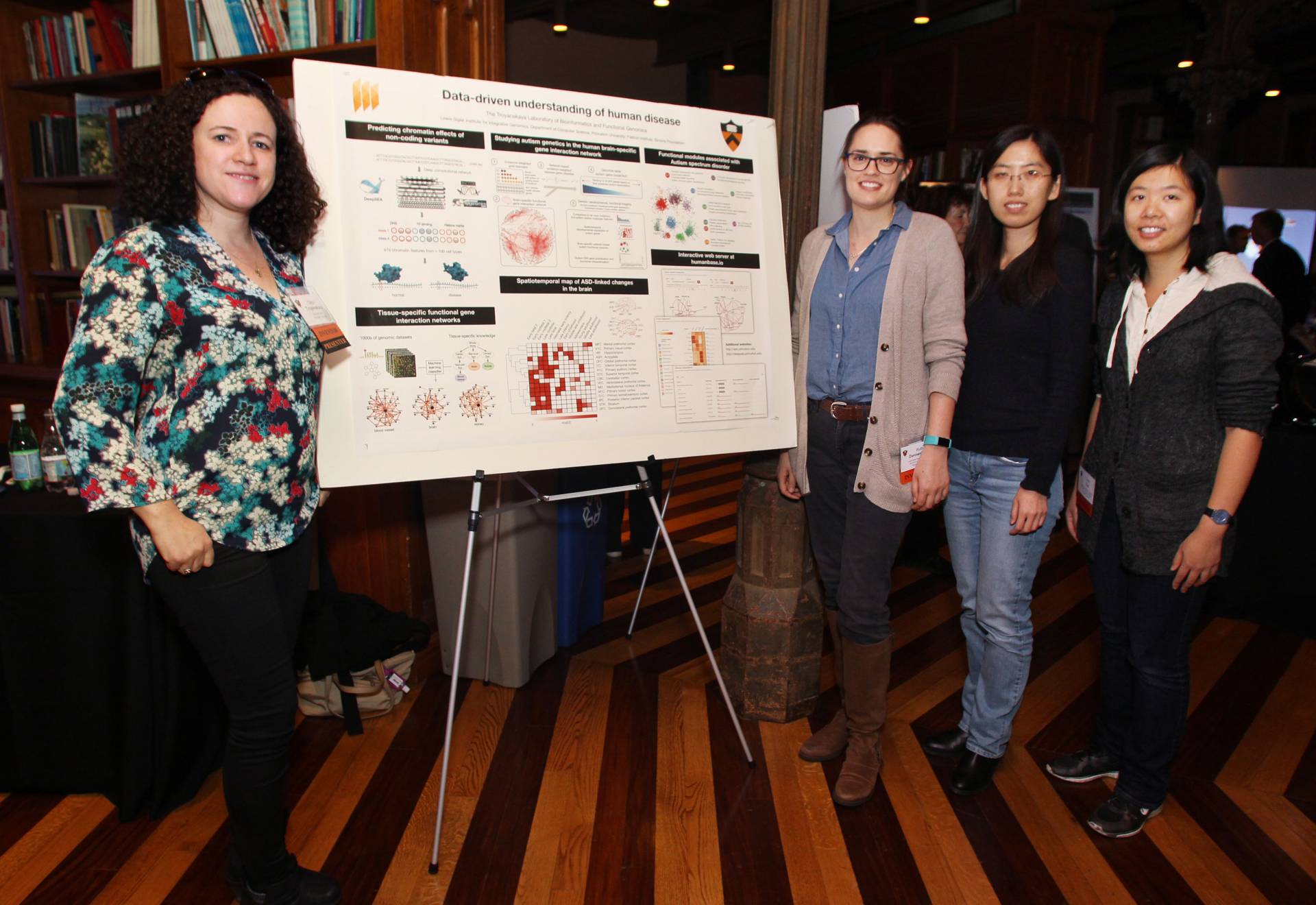 Olga Troyanskaya, professor of computer science and the Lewis-Sigler Institute for Integrative Genomics, and her team are developing "big data" methods that allow researchers to rapidly sift through massive databases of genetic information to efficiently identify genes associated with disorders such as autism and kidney disease, and to develop novel therapeutic targets.

The four student-led companies were:

Undergraduate Yash Huilgol, Class of 2018, presented SoundSpine, a company that is developing an improved device for transporting patients at risk of spine injury. SoundSpine is part of the Keller Center's Tiger Challenge program, which organizes small teams of students to address societal needs using a design-thinking approach. 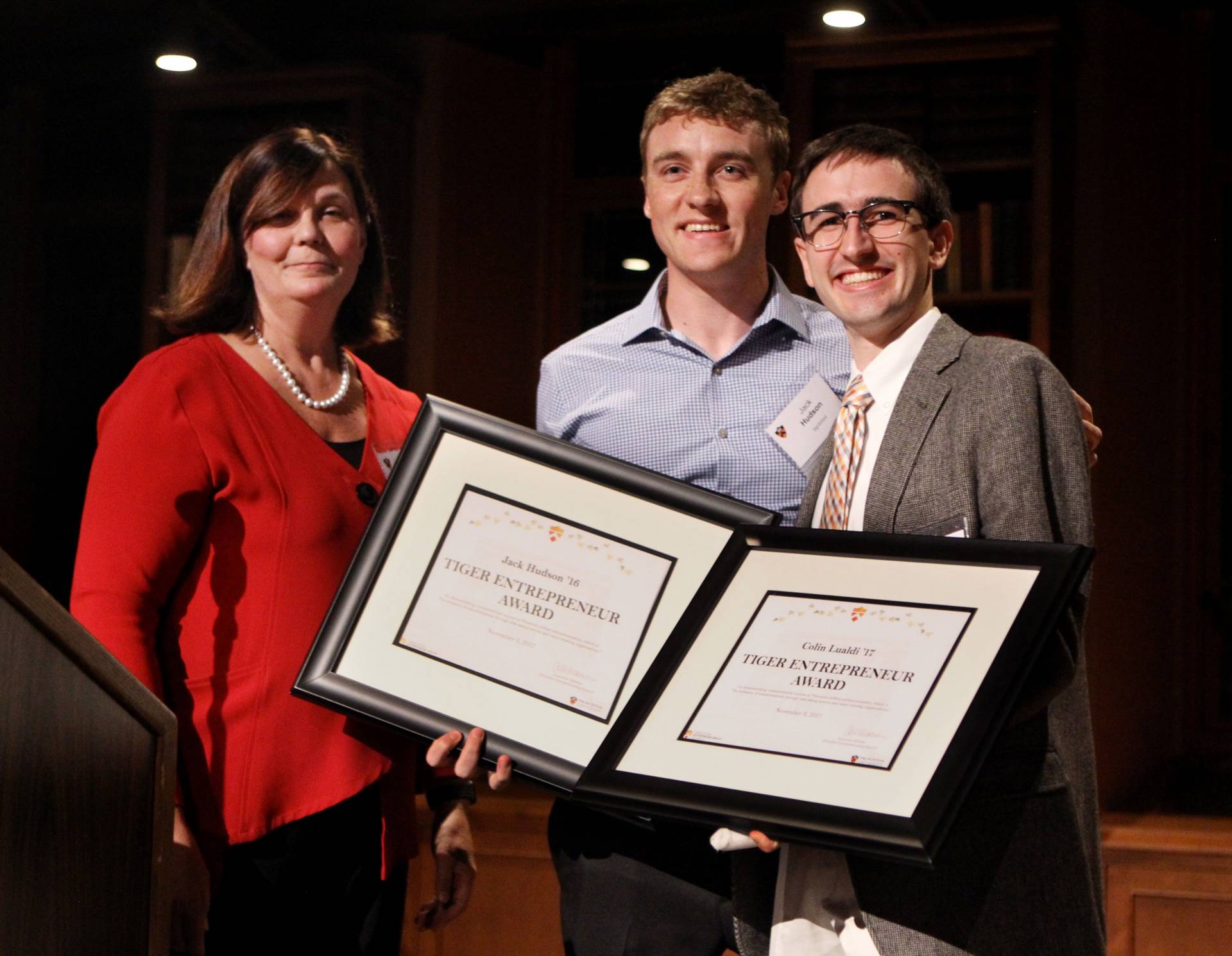 Anne-Marie Maman (left), executive director of the Princeton Entrepreneurship Council, presented the inaugural Tiger Entrepreneur Awards, given to outstanding students and alumni who've demonstrated entrepreneurship and innovation. Among the recipients were (left to right): Jack Hudson, Class of 2016; Colin Lualdi, Class of 2017; and (not pictured) Evan Corden, Class of 2016. The team built SignSchool, an online learning platform for American Sign Language.

The inaugural Tiger Entrepreneur Awards were presented to:

Aaron Schwartz, Class of 2017, and Angelo Campus, Class of 2016, who are developing containerized solutions for bringing clean, affordable energy to remote sites around the world.

Brooks Powell, Class of 2017, who is developing products from neuroscience research he encountered while obtaining his degree in liberal arts.

Stephanie Speirs and Steve Moilanen, who received Master in Public Affairs degrees from the Woodrow Wilson School of Public and International Affairs in 2014, for working to make solar electricity more accessible and affordable through community projects.