Technologies and discoveries with the potential to make a difference in everyday lives lined the tables and booths at Princeton University's 10th annual Celebrate Princeton Innovation reception. Over 300 guests attended the event Thursday, Nov. 8, at the Frick Chemistry Laboratory.

Among the technologies on display: A genetic test that can determine your dog's sociability level, a system for providing fast Wi-Fi downloads for people on the go, a low-cost water purification system, and a new screening platform for new drugs to treat hepatitis. (See the full list of faculty inventors and their technologies below.) 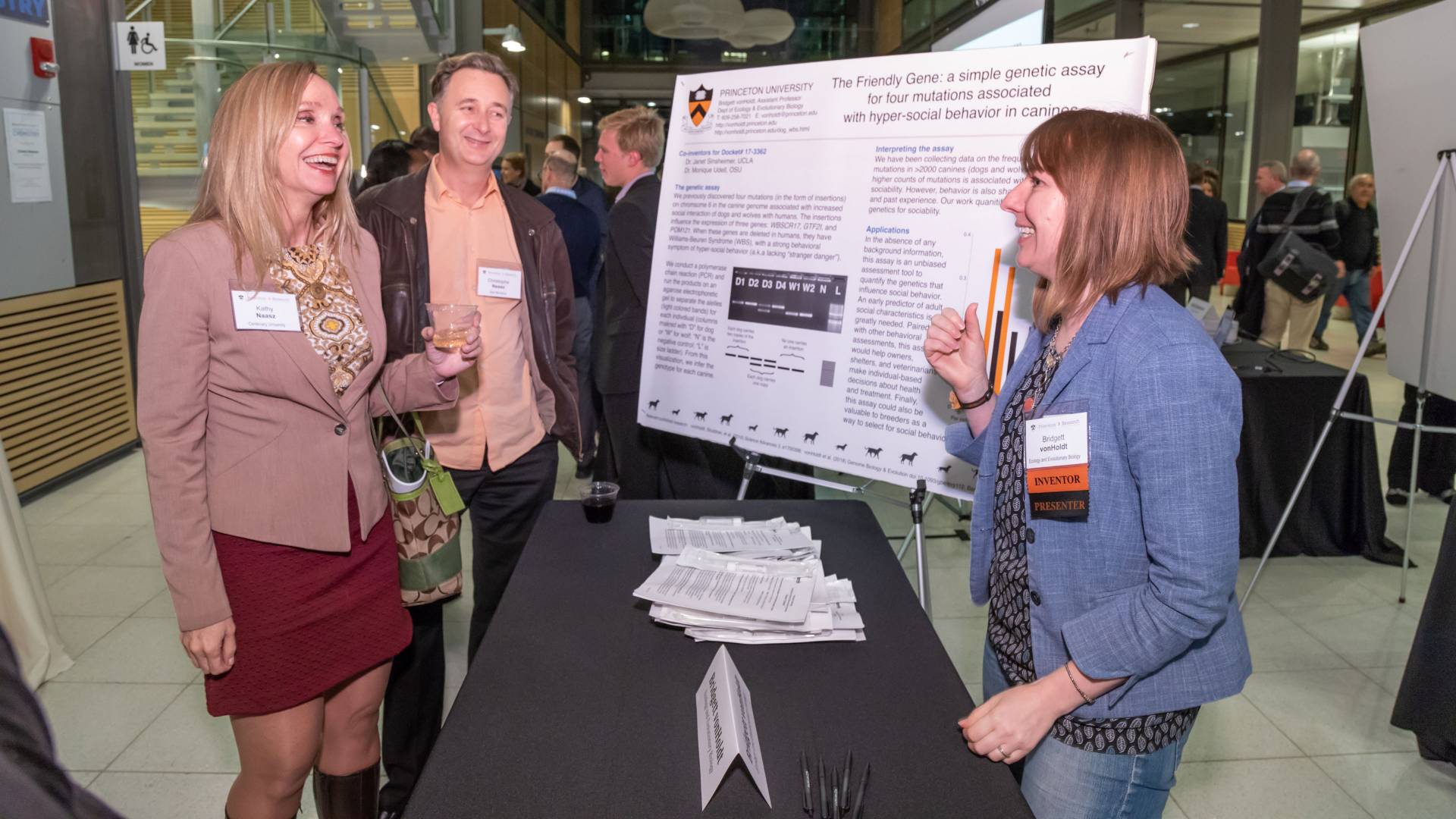 Bridgett vonHoldt, right, assistant professor of ecology and evolutionary biology, describes her technology to attendees at Celebrate Princeton Innovation on Nov. 8. VonHoldt is developing a genetic test to determine canine sociability, which could help match dogs with owners.

Each year, the campus hosts the reception to honor University inventors and their research teams, and to bring campus researchers together with the external community of entrepreneurs, investors, industry partners, business organizations and others who participate in the innovation ecosystem in New Jersey.

"Celebrate Princeton Innovation offers an opportunity to highlight the groundbreaking discoveries happening in our laboratories and working spaces that can transform people's everyday experiences and improve their well-being," said Karla Ewalt, acting dean for research. "Our collaborators in the broader innovation ecosystem are essential to the process of translating university research to the wider public where it can benefit humanity."

The event is also an opportunity to highlight Princeton's role as a citizen and catalyst of the regional innovation economy, said Provost Deborah Prentice, the Alexander Stewart 1886 Professor of Psychology and Public Affairs, during remarks at the event.

"The University is strongly committed to playing a leadership role in building the regional and state innovation ecosystem," Prentice said. "We have been working to forge a productive partnership with the state of New Jersey as it enhances support for the growth of new technologies and startups, and creates incentives for research partnerships." 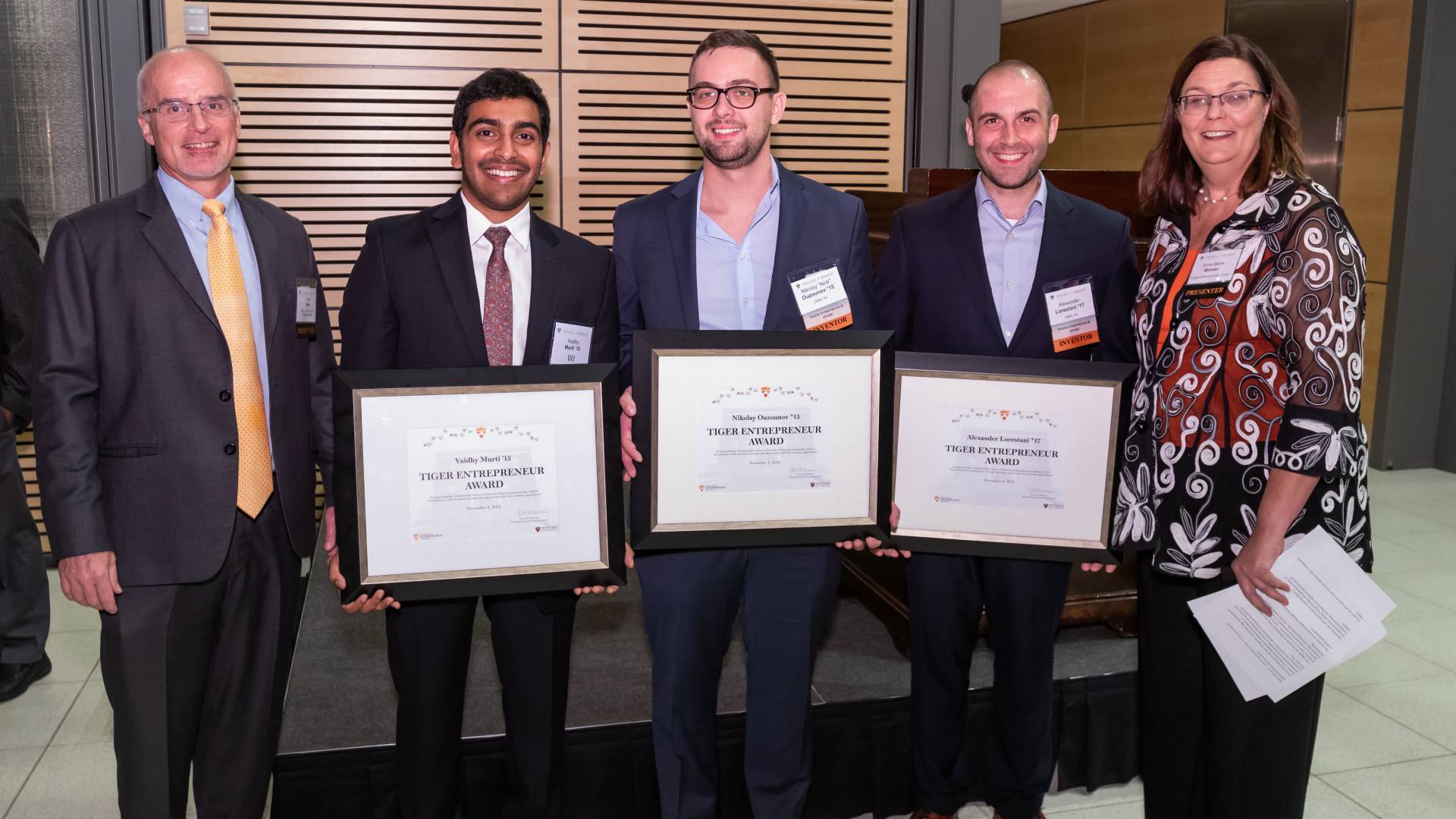 In support of the event and in honor of the 10th anniversary, legislators from New Jersey's Senate and General Assembly issued a joint legislative resolution authored by Assemblywoman Britnee Timberlake, Assemblyman Thomas Giblin and Sen. Ronald Rice.

Some examples of the recent emphasis on innovation include: 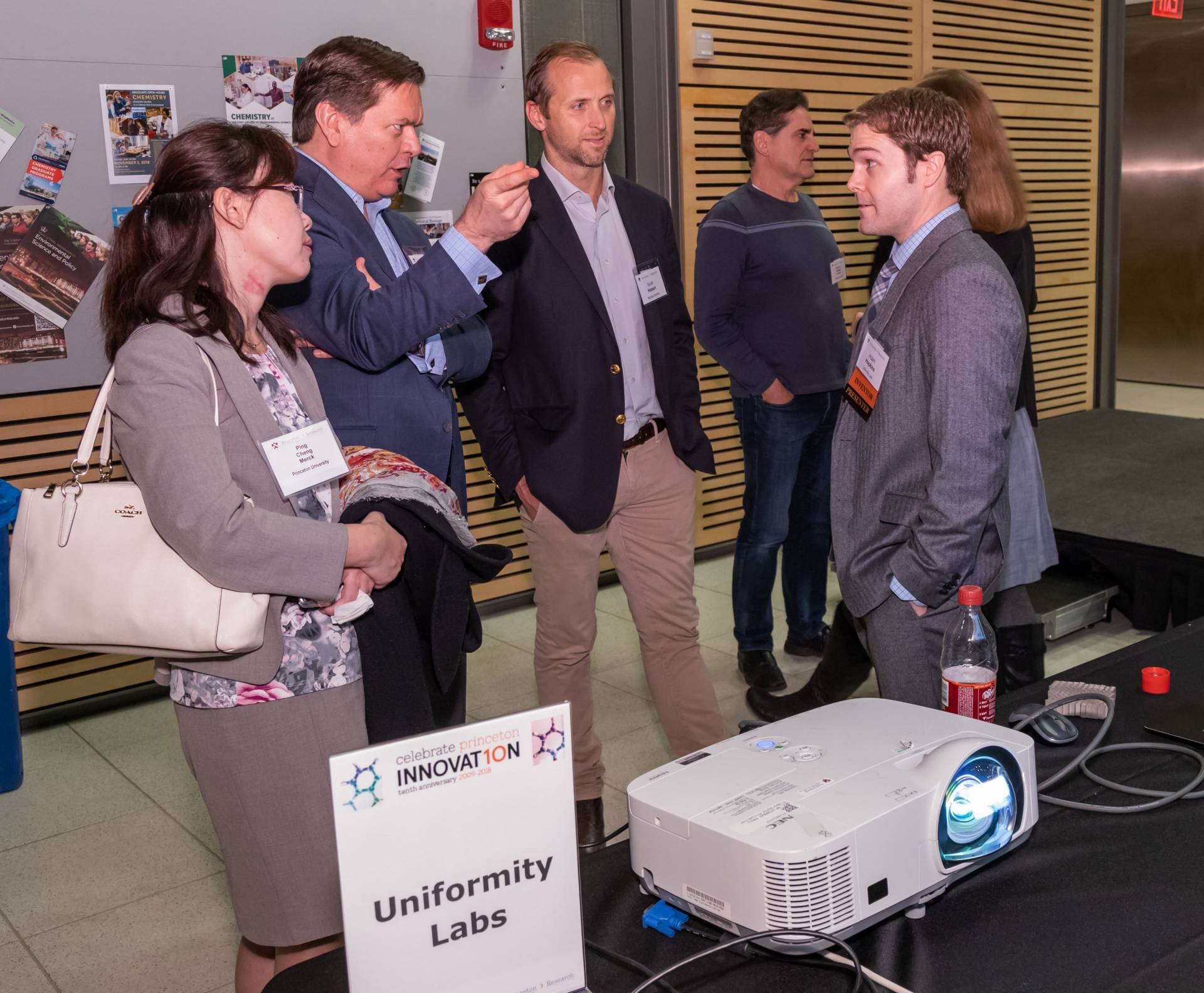 Adam Hopkins, right, who earned his undergraduate and doctoral degrees at Princeton, talks about founding the startup Uniformity Labs, which manufactures powders for industrial-scale 3D printers.

The event was held for the first time this year at Frick Chemistry Laboratory. The building has special significance for such an occasion, as it was built by reinvesting funds earned from a pioneering cancer drug made possible through the research of a Princeton chemistry professor, the late Edward Taylor.

"It is fitting that we are celebrating this 10th anniversary in Taylor Commons, named for the inventor of the compound that became the anti-cancer drug Alimta, perhaps Princeton’s most visible and successful technology transfer to date," said John Ritter, director of the Office of Technology Licensing. The office helps faculty members, students and staff researchers find ways to transfer University-developed technologies to companies, including startups, to bring them to market.

One such company is Uniformity Labs, a 15-person startup in the 3D printing and manufacturing industry. The company is headed by Adam Hopkins, who earned his undergraduate degree in physics and his Ph.D. in chemistry at Princeton. With Salvatore Torquato, the Lewis Bernard Professor of Natural Sciences, Hopkins co-invented powders for use in 3D printing. These powders may form the basis of strong and lightweight parts in consumer electronics, automobiles, power generation and aerospace applications.

"Princeton provides the support that we as researchers need to bridge relationships between the scientist and those in a position to fund the translation of technology," Hopkins said. "The Office of Technology Licensing helped us with the legal aspects of patent protection, and provided the foundation that allowed us to build the path to commercialization." 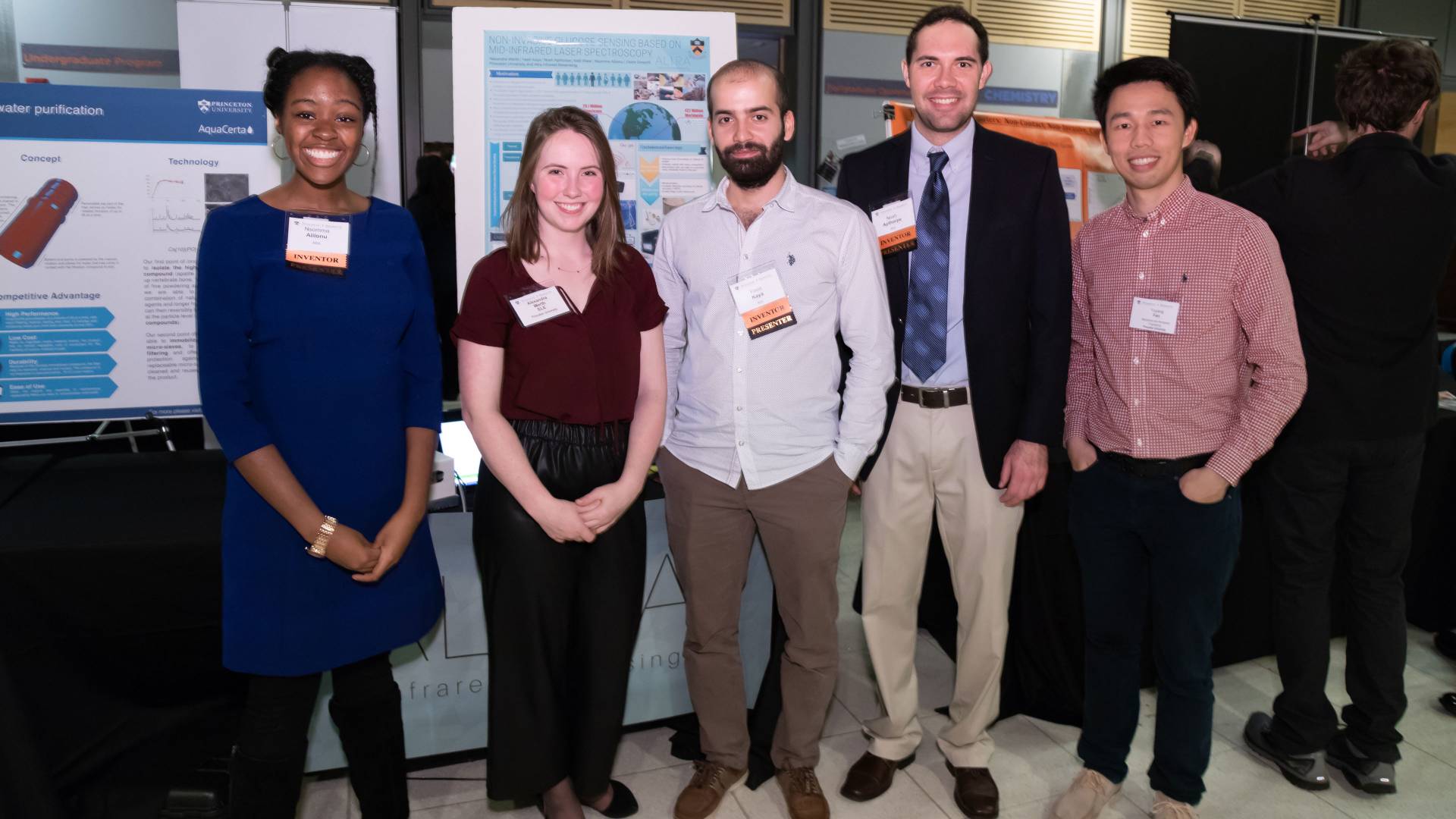 Research collaborations and broader comprehensive partnerships with industry continue to expand at Princeton. "These relationships provide another path for ensuring that University innovations find application and they enhance the University’s ability to pursue its educational and research mission and accelerate its impact in the world," said Coleen Burrus, director of Corporate Engagement and Foundation Relations. "The Corporate Engagement team offers a front door to companies who want to engage with the University," she said.

Students interested in transitioning technologies into new companies can get training at Princeton's Keller Center, which offers numerous programs, classes, workshops and hands-on opportunities. The center's eLab startup accelerator and incubator programs provide mentoring and support for student-led companies. Three companies participating in the eLab programs in attendance at the event were:

"The environmental issues our world deals with are not just about being more eco-friendly, they are about economics," said Jorge Reyes, Class of 2019, who started TerraBite with classmates Nikita Turley and Pranaya Anshu. "We are thrilled that Princeton, through the Keller Center, is providing the education and support to help us build a technology that we believe will help revolutionize a far outdated food production system and benefit the environment."

The event culminated with the presentation by the Princeton Entrepreneurship Council (PEC) of the Tiger Entrepreneur Award. These awards are given annually to undergraduates, graduate students or early-career alumni who demonstrate success in entrepreneurship.

This year's awardees were:

"These individuals embody the spirit of entrepreneurship at Princeton," said Anne-Marie Maman, PEC executive director, "which we define as the initiation of transformations through risk-taking actions and value-creating organizations." She continued, "These are people who have shown a dedicated commitment to inspiring others, to driving change, and to making outstanding contributions to projects and companies that have transformative potential." 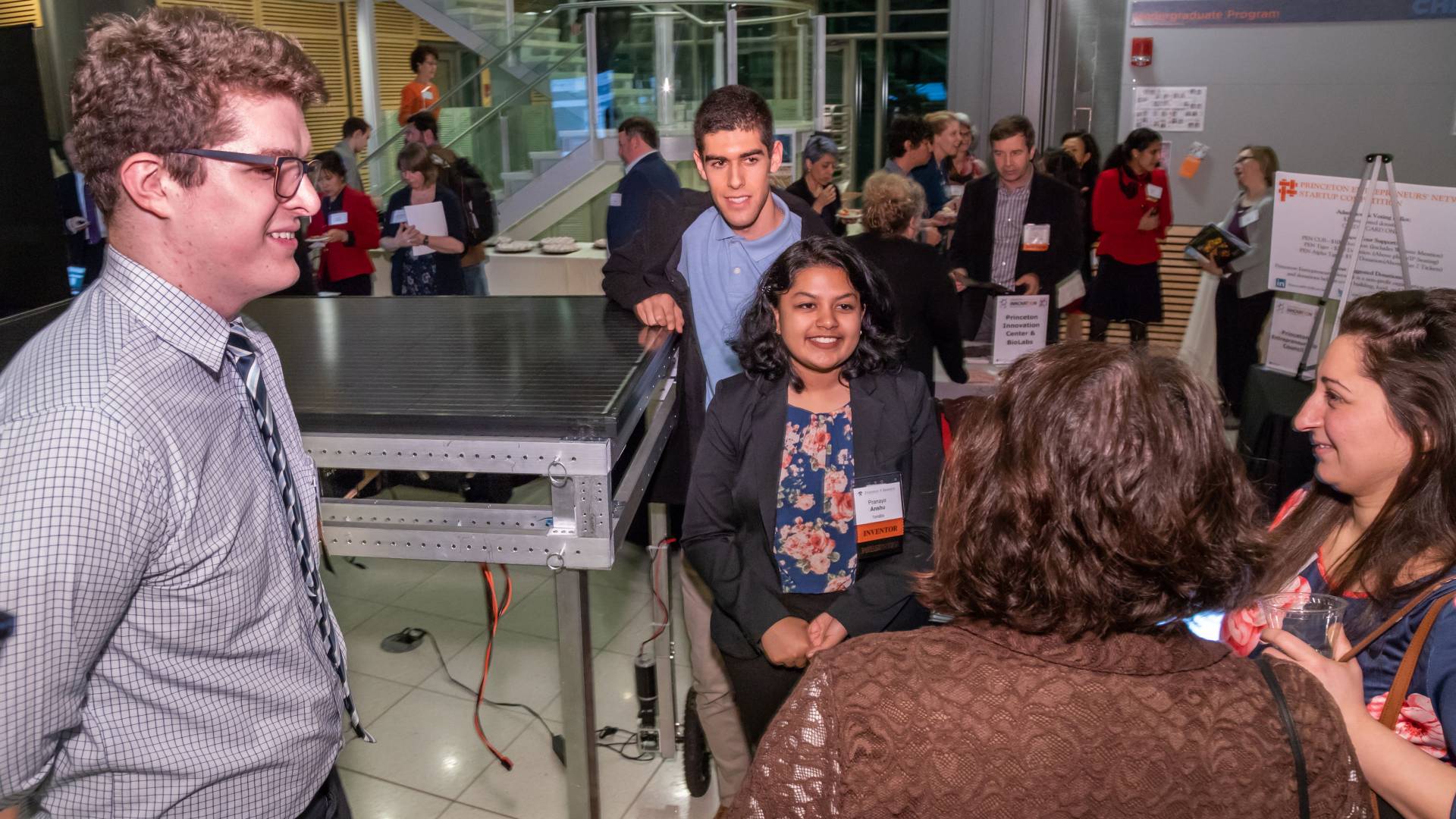 Members of TerraBite, a student company developing a robot that can automate small farms with the aim of providing healthy food at lower costs, describe their technology. From left: Nikita Turley, Jorge Reyes and Pranaya Anshu, all Class of 2019.

Learn more about the faculty inventors and their technologies on display:

Learn about the campus offices that support innovation at Princeton: