A 3-D microscope capable of imaging the parasitic worms studied in aging research was one of several new technologies on display at this year's Celebrate Princeton Invention, a reception to mark the accomplishments of faculty members, research staff and students engaged in innovation.

The event, held Thursday, Nov. 21, at Chancellor Green Rotunda on the Princeton University campus, offered opportunities for University inventors to present their discoveries and meet leaders from industry and the venture capital community. 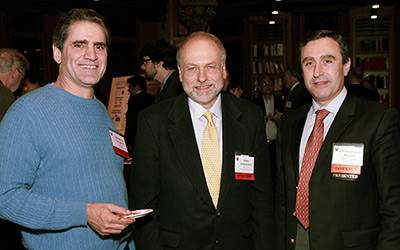 Celebrate Princeton Invention offered many opportunities for faculty members to connect. Left to right, Salvatore Torquato, professor of chemistry and the Princeton Institute for the Science and Technology of Materials; Pablo Debenedetti, dean for research and the Class of 1950 Professor in Engineering and Applied Science; and Christodoulos Floudas, the Stephen C. Macaleer '63 Professor in Engineering and Applied Science. (Photos by Frank Wojciechowski for the Office of the Dean for Research)

"We are very fortunate tonight to honor the many members of the Princeton research community who are applying their unique blend of intellect and creativity to the practical challenges facing our world," said Pablo Debenedetti, Princeton's dean for research and the Class of 1950 Professor in Engineering and Applied Science. "These challenges include creating better therapeutic drug molecules, detecting explosives, and finding new solutions to meet our growing energy demands in a sustainable way."

Each year, Princeton researchers come up with nearly 100 new discoveries of commercial potential, according to the University's technology licensing office. Under federal law, the University can file patents for these inventions, enabling the technologies to be licensed to a startup or established company.

Many of these inventions came about because of a researcher's need to solve a certain problem or fulfill a need existing products do not address. Some of the technologies may end up in consumer products while others will occupy niche markets as tools or equipment for other avenues of scientific research.

The 3-D microscope invented by Jason Fleischer, associate professor of electrical engineering, and Nicolas Pégard, a graduate student in electrical engineering, has the potential to transform the ability of researchers to take a look inside living organisms such as the parasitic worm Caenorhabditis elegans, which is about the size of a grain of sand and is used in the study of aging and other biological processes.

"The goal is to perform CAT scans on individual cells," said Fleischer, "using visible light instead of damaging X-rays."

Another invention on display was an automated system for directing yeast cells to produce certain proteins. Biologists frequently study yeast as a model for what goes on in humans. The automated system developed by Megan McClean, an associate research scholar in Princeton's Lewis-Sigler Institute for Integrative Genomics, could help reveal how protein-signaling in cells goes awry and leads to diseases such as cancer. McClean's research team includes Research Specialist Michael Patel and Associate Research Scholar Marcus Noyes. 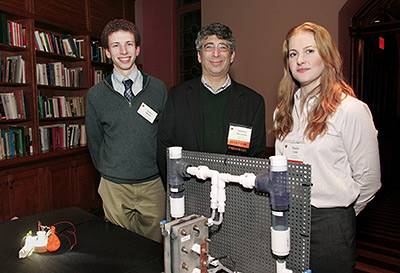 Liquid Light Inc. is developing technology to turn carbon dioxide into fuels and industrial chemicals. The technology was developed in the laboratory of Andrew Bocarsly (center), professor of chemistry, with Emily Cole (right), who earned her Ph.D. from Princeton in 2009 and went on to co-found Liquid Light. At left is James White, a graduate student in chemistry.

Yet another new technology showcased at the event was a highly sensitive magnetism detector that can be used to find explosives as well as diagnose health conditions such as epilepsy and cardiac arrhythmias. Michael Romalis, a professor of physics, is leading a team to develop the detector, which senses very faint magnetic fields by measuring a quantum mechanical property known as spin. The researchers, including Nezih Dural, a senior technical support staff member, are working on a portable version for field use.

Under the federal Bayh-Dole Law enacted in 1980, universities are able to patent discoveries made using federal funding. John Ritter, director of technology licensing, thanked those in attendance who work with Princeton to protect the University's intellectual property and enable the transition to the marketplace.

"We depend on our partners in attendance tonight from industry, as well as the legal and investment community, to engage with Princeton in the difficult but important work of protecting and facilitating the transfer of basic research into products that will benefit society," Ritter said.

The technologies at the event reflect the desire of researchers to make discoveries relevant to society, Debenedetti said.

"In the academic community at large, there is often a tendency to divide the research endeavor into two categories: 'pure' or curiosity-driven unfettered research undertaken solely for the pursuit of knowledge, and 'applied' research aimed at addressing a specific application," he said. "In fact, these two aspects of research do not exist in separate camps but rather as points on a continuum. Both curiosity and necessity help define the boundaries of knowledge; both curiosity and necessity underlie technological innovation."

Featured speaker Thomas Connelly Jr. of the DuPont Company remarked on the number of relationships that the chemical company has established with universities, including Princeton, through the DuPont Young Professors program, which supports early-career faculty members. "The range of science and technology on display tonight is very impressive," Connelly said.

Other technologies highlighted at the reception included:

* A new portable sensor for detecting air pollutants, invented by a team led by Mark Zondlo, an assistant professor of civil and environmental engineering

* A process for characterizing which materials are best for separating carbon dioxide from the gas streams of coal-based power plants and cement factories, invented by Christodoulos Floudas, the Stephen C. Macaleer '63 Professor in Engineering and Applied Science with graduate student Eric First and Postdoctoral Research Associate Faruque Hasan. 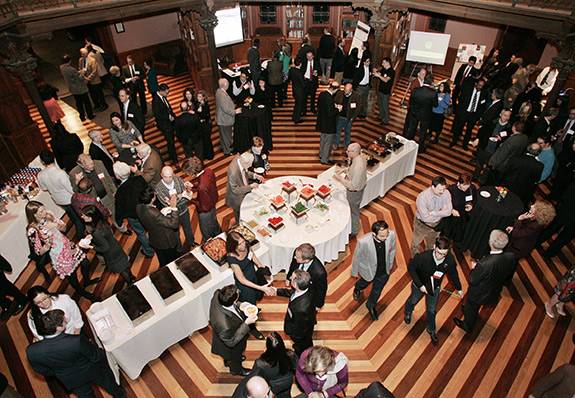 The reception offered many opportunities to discuss the intersection between basic University-led research and the development of research by the business community.

The reception also highlighted a handful of startup companies started by Princeton students. One such company, Ecliptic Industries, is using 3-D printing to create the plastic molds that foundries use when casting metal tools, according to founder Matthew Plasek, who will graduate in 2014 with a master's degree in mechanical and aerospace engineering. Another startup, Pearl's Barley Tea, was founded by Tsvetelina Churalska, a graduate student in the School of Architecture; Sarah Nagy, a master's student in finance; Carly Paris, Class of 2014; and Stephanie Sanders, Class of 2016.

The two student-led companies developed their business plans and sample products with the help of Princeton's eLab, a 10-week summer program that provides eight teams with funds, laboratory space and training in serial entrepreneur Steve Blank's Lean LaunchPad curriculum. The eLab is sponsored by Princeton's Keller Center, which is housed in the School of Engineering and Applied Science. 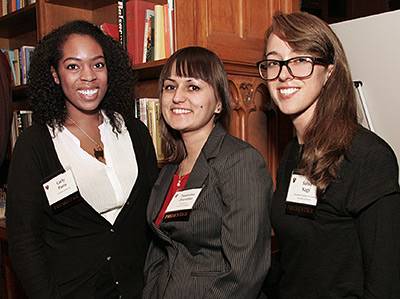 One of a handful of student start-ups at the event was Pearl's Barley Tea, one of ten companies that emerged from Princeton's Keller Center ELab Program, which provides training and resources for emerging student start-ups. From left to right, Carly Paris, Tsvetelina Churalska and Sarah Nagy.

Other student startups included the online chess instruction site, Chesscademy, founded by Andrew Ng, Class of 2016, and Stitch Your Story, a social commerce platform that bridges the gap between consumers and artisans across the globe. Stitch Your Story was founded by Jenna Rodrigues and Megan Partridge, Class of 2014, and Marina Kaneko, Class of 2015. Many of the students are part of the Entrepreneurship Club, or E Club, which offers education, hackathons, networking events and other opportunities.

Each year the reception features one company that has spun off from a University technology. This year it was Liquid Light, a Monmouth Junction-based company that converts waste carbon dioxide into fuels and chemicals. The technology was developed by Andrew Bocarsly, professor of chemistry, and then graduate student Emily Cole, who earned her Ph.D. at Princeton in 2009. Today, Liquid Light, which was co-founded by Cole and entrepreneur Kyle Teamey, employs about 25 people. "We are doing some great work that we think will make the world a better place," said Teamey.

The reception attracted senior leadership officers not only from DuPont but also Siemens Corporation, Pfizer Consumer Healthcare, PSEG, Lockheed Martin and others. The reception was supported by donations from Yahoo! Labs and the law firm of Marshall Gerstein & Borun LLP.