Princeton Professor of Chemistry Andrew Bocarsly (left) and Emily Cole, who received her Ph.D. from Princeton in 2009, are among the founders of the startup company Liquid Light, which turns carbon dioxide into fuels and industrial chemicals. The research behind the formation of Liquid Light began in Bocarsly's lab, which continues to collaborate with the company.

Ask Andrew Bocarsly about the innovation behind Liquid Light, a New Jersey startup company that turns carbon dioxide into fuels and industrial chemicals, and the Princeton University chemistry professor smiles ruefully. "The project goes back to the early '90s," he said. "But nobody cared about carbon dioxide at that time."

Today, carbon dioxide (CO2) is a hot topic. Scientists around the globe are searching for ways to store, dispose of, or prevent the formation of the greenhouse gas, which is a major driver of global climate change. Liquid Light hopes to take this concept one step further and harness waste CO2 as a source of carbon to make industrial chemicals and fuels. 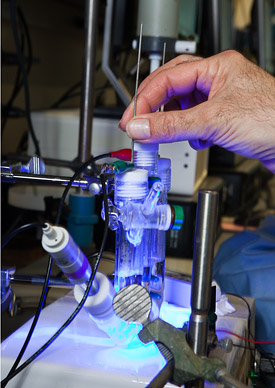 Liquid Light's core technology involves taking carbon dioxide and mixing it in a water-filled chamber with an electrode and a catalyst to convert carbon dioxide into methanol. (Photo by Denise Applewhite)

The technology behind the process is simple: Take CO2 and mix it in a water-filled chamber with an electrode and a catalyst. The ensuing chemical reaction converts CO2 into a new molecule, methanol, which can be used as a fuel, an industrial solvent or a starting material for the manufacture of other chemicals.

Liquid Light's founders include Bocarsly and his former graduate student Emily Cole, who earned her Ph.D. from Princeton in 2009. Cole helped revive efforts in Bocarsly's lab to study the conversion of CO2 into usable fuels, which led to the launch of Liquid Light and an ongoing collaboration that Bocarsly said has been extremely positive for his research team at the University.

"We've made some discoveries that wouldn't have been made in a university setting, and this has really accelerated the research," Bocarsly said. "It is a very productive relationship."

Back in the 1990s, a former Ph.D. student of Bocarsly's named Chao Lin conducted some of the earliest experiments on turning CO2 into methanol. He used palladium metal as the electrode and pyridinium, an inexpensive ring-shaped molecule, as the catalyst. By plugging the electrode into an electrical outlet, he could drive an electrochemical reaction that converted CO2 into methanol.

As Bocarsly recalled, Lin was quite excited about his success. However, said Bocarsly, "We published that finding in 1994 and there was approximately zero interest in it."

The work languished until 2005 when Cole, then a new graduate student, told Bocarsly she wanted to work on a clean-energy project. She took up the challenge of reproducing Lin's results, but this time using sunlight instead of electricity to drive the reaction.

Cole set up a flask containing a solution of CO2 and a pyridinium catalyst dissolved in water. In place of sunlight, which emits a broad spectrum of wavelengths of light, she shined on the flask a blue light-emitting diode (LED) because it gives off certain wavelengths that are highly efficient at driving the reaction. In the flask she placed an electrode that is activated by particles of light, or photons. "We used a semiconductor electrode that would allow us to substitute light for electricity," said Cole.

In Cole's setup, photons hit a gallium phosphide semiconductor and excite its electrons to travel to the semiconductor's surface and into the surrounding water. The catalyst then shuttles the electrons to the CO2. Those electrons attract hydrogen from the surrounding water to turn CO2 (one carbon and two oxygens) into methanol (one carbon, one oxygen and four hydrogens) with the release of oxygen.

Bocarsly likes to call the process "reverse combustion" because it is like running a burning reaction backwards. Instead of burning fuel and oxygen to produce CO2, the CO2 converts back into fuel and oxygen. This time, when the team published in May 2008 in the Journal of the American Chemical Society, the results generated a lot of interest. 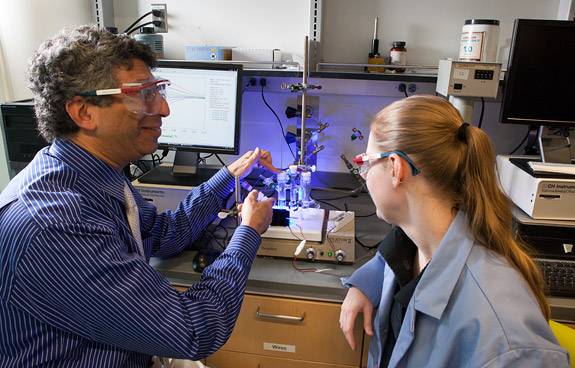 Liquid Light licensed its technology from Princeton. Cole leads a team of chemists who tackle the practical issue of how to scale up a laboratory invention to an industrial scale, while Bocarsly chairs the company's scientific advisory board. (Photo by Denise Applewhite)

Taking the idea into industry

One person who read that paper was Kyle Teamey, an entrepreneur who was representing a venture capital firm that wanted to invest in clean-energy technologies. He was attracted to the idea that waste CO2 could be put to use as a starting material for making fuels and industrial chemicals that could be sold at a profit.

"Everyone had been talking about burying CO2 underground," said Teamey. "Why not instead turn carbon dioxide into something valuable?"

After months of talks with Bocarsly and Cole as well as other advisers, Teamey and Cole co-founded Liquid Light. The company licensed the technology from the University. Teamey serves as company president, while Cole and her team of chemists tackle the practical issue of how to scale up a laboratory invention to an industrial scale. Bocarsly serves as chair of the company's scientific advisory board.

The research has received funding from the Air Force Office of Scientific Research (AFSOR), the National Science Foundation and the Department of Energy (DOE). The collaboration between Liquid Light and the University was supported by the DOE Small Business Innovation Research program and the AFOSR Small Business Technology Transfer program.

Princeton's agreement with Liquid Light allowed the company to continue to collaborate with Bocarsly and his research team. Before long, new discoveries were emerging. "They started noticing interesting chemistry that we wouldn't have predicted," said Bocarsly.

The Princeton scientists did some additional studies, and made a surprising discovery: They could turn CO2, which contains only one carbon, into a compound with a carbon-carbon bond, which vastly increases the possibilities for creating commercial applications. This was radical because although the reaction is certainly possible, it is highly unlikely to happen because so many other competing reactions are occurring.

"Everyone who electrochemically reduces CO2 today makes compounds with only one carbon," said Bocarsly. "Nobody makes things with carbon-carbon bonds." He paused. "But we can."

"That was a very 'wow' moment," recalled Cole, "because we thought that our process could only make methanol. But now we were finding that we could make a variety of products, and that is what makes this technology commercially interesting." She said Liquid Light scientists can now make more than 20 different products from CO2.

One of the chemicals Liquid Light can make is isopropanol, commonly known as rubbing alcohol and an important industrial chemical. Another is butanol, which could be commercially important as a fuel. Liquid Light's technology offers the potential to make these chemicals at lower cost than today's methods, which involve starting with fossil fuels such as petroleum and natural gas. 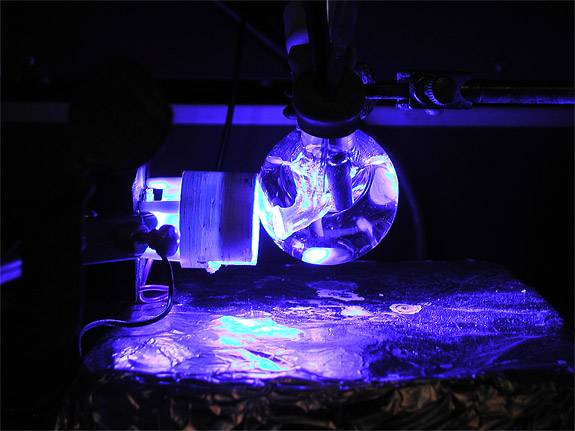 This photoelectrochemical cell contains a solution of carbon dioxide and pyridinium as a catalyst dissolved in water. A low-power blue light-emitting diode (LED) provides light, which activates the semiconductor, causing the conversion of the CO2 and water to methanol and oxygen with the help of the pyridine catalyst. This cell is highly efficient, with greater than 95 percent of the electrons generated by the illumination going into the formation of methanol. (Image courtesy of Andrew Bocarsly)

Back in the Princeton lab

While Liquid Light is developing the technology commercially, back in the chemistry department at Princeton, Bocarsly and his team are tackling a question that has puzzled the chemist since the 1990s: Why does pyridinium work so well as a catalyst for the reaction? Based on its structure, the ring-shaped molecule is an unlikely catalyst for this reaction because it shuttles just one electron at a time. But to convert CO2 to methanol requires six electrons, and to make higher-carbon molecules takes even more electrons.

Bocarsly and his team — in collaboration with Steven Bernasek, professor of chemistry — are doing studies to understand the steps in the chemical reaction, and they are making rapid progress. "There are clearly some intermediate products formed during the reaction that do not sit around for a long time and are not there in very high concentrations," said Bocarsly.

The Princeton team also is studying the factors that determine which products can be made from CO2. The researchers have found that very subtle changes in the electrode surface can lead to production of different chemicals. For example, CO2 plus a pyridinium catalyst and a platinum electrode make methanol. However, the same catalyst and a different electrode give a different product. The team published its findings on how the reaction is affected by catalyst concentration, temperature and pressure in the journal ChemSusChem last year.

Meanwhile, scientists at Liquid Light are overcoming the practical hurdles inherent in converting laboratory findings to commercial technologies. One finding is that using sunlight to drive the reaction is not as efficient as using standard electricity from a wall outlet, so the researchers are exploring ways to harness electrical power generated from green technologies such as wind or hydroelectric power.

Citing government statistics that the United States generates about 5.5 billion metric tons of CO2 per year, Teamey said it will not be hard to obtain the starting materials for this new industry. However, the CO2 needs to be relatively pure, a requirement that rules out gasoline tailpipes and coal-fired power plants. Instead, said Teamey, the CO2 could come from manufacturing facilities, such as fertilizer manufacturers and cement plants, which according to Teamey emit some 100 million tons of high-purity CO2 each year.

Cole said her transition from Princeton Ph.D. graduate to startup employee has been a smooth one. "Startups can be very exciting because you are taking work from the academic setting and trying to make it work economically in the marketplace," she said. "It is rewarding because you can see your project from graduate school become an actual technology that impacts people."