Arguably the most important (if least well known) industrial advancement of the 20th century, the Haber-Bosch ammonia synthesis process essentially conquered food scarcity by creating the means to mass produce fertilizer — fertilizer then used to fortify food harvests around the world.

But the production of ammonia — the building block for ammonium nitrate fertilizer — generates a problematic byproduct down the line: carbon dioxide. Lots of it: more than two tons of carbon for every ton of fertilizer. It accounts for an estimated 1.4% of global carbon dioxide emissions. So, while the process countered mass starvation, it also began ratcheting up the planet’s burden of greenhouse gases.

One of the main goals before scientists today is de-coupling food production from carbon. In part, this means finding a way to produce fertilizer through carbon-free ammonia synthesis. Can it be done without Haber-Bosch? 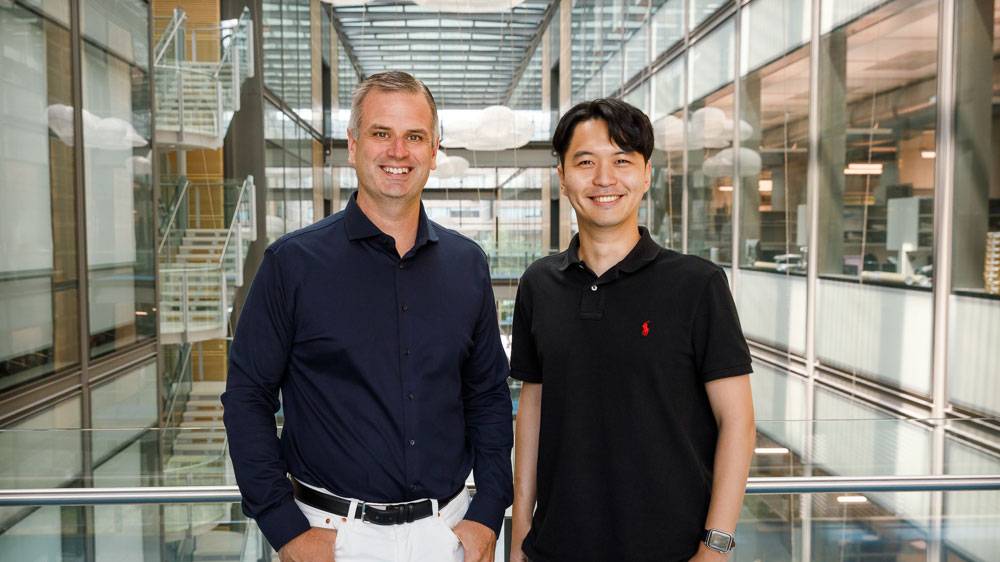 Paul Chirik, Princeton's Edwards S. Sanford Professor in Chemistry (left), and Yoonsu Park, a postdoctoral research associate in the Chirik lab, have found the vital first step toward creating fertilizer without generating tons upon tons of carbon dioxide, a major greenhouse gas. Their work could be the key to ending world food scarcity in a carbon-neutral way.

Paul Chirik, the Edwards S. Sanford Professor in Chemistry, has taken an important step towards this possibility with a unique, fundamental approach to the synthesis of chemical bonds. He and the researchers in his lab use visible light to drive the formation of weak element-hydrogen bonds, which lie at the heart of the challenge because they are so difficult to make.

The lab’s proof-of-concept paper, published this month in Nature Chemistry, lays out a simple method that involves shining blue light on an iridium catalyst to enable the formation of weak bonds at or near thermodynamic potential — that is, with no massive outlays of energy — without a carbon byproduct.

“The big breakthrough here is being able to take light and then promote a chemical reaction to make a bond that’s really weak, that you couldn’t do without an external stimulus,” said Chirik. “In the past, that stimulus has been coupled with making waste or consumption of electricity. Here, we’re doing it with light.

“We have this world of metal catalysts that have done amazing things — they’ve made ammonia, they’ve made drugs, they’ve made polymers. Now, we can do even more with them when we start looking at what happens when these catalysts absorb light,” he added. “So, you’re taking something that did really cool chemistry before and you’re juicing it with another 50 kilocalories.

“A whole world opens up. Suddenly, there’s a new class of reactions we can think about doing.”

E-H bonds are simply a way of denoting any bonds you might make between hydrogen and another element. E-H bond strengths are highly dependent on the chemical structure of each element, but many of these bonds are weak — unstable and inclined to break easily and form hydrogen (H2). Most chemical reactions are driven by the formation of strong bonds, as energy is released when more stable products are formed. It is the assembly of weak bonds that poses the challenge. 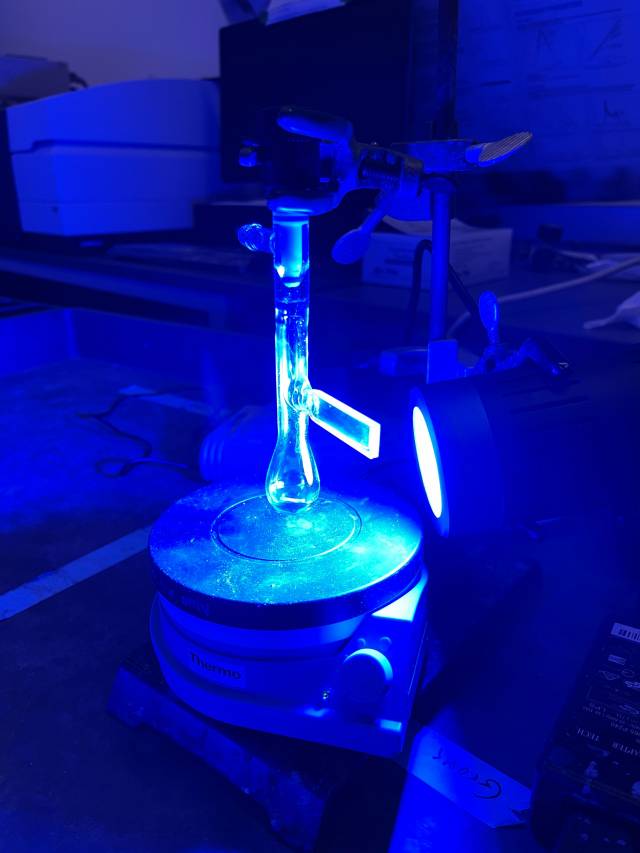 Shining blue light on iridium gets it “excited,” giving it the energy to bump into the anthracene molecule and transfer a hydrogen atom,making a weak bond. The iridium catalyst then activates hydrogen gas, completing the cycle.

The Chirik lab has found a way to make a weak bond by shining light on a catalyst; in this case, iridium.

This is how it works: Researchers chose a representative organic molecule, anthracene, which acts as a kind of platform on which the chemistry takes place inside the reaction flask. Shining blue light on iridium inside the flask gets it “excited,” meaning it has energy to drive the reaction. In this state, it bumps into the anthracene molecule and transfers a hydrogen atom to make a weak bond. The iridium catalyst then activates hydrogen gas, completing the cycle.

Utilizing hydrogen gas instead of carbon-based hydrogen sources — widely utilized in organic synthesis in the past — potentially provides sustainable way of making weak chemical bonds without generating a carbon byproduct.

Yoonsu Park, a postdoctoral research associate in Chirik’s lab and lead author on the paper, and Sangmin Kim, a 2021 Ph.D. graduate of the lab, came up with the idea of using photochemistry by reviewing weak bonds that appear in other reactions and extrapolating their lessons. Two additional authors on the paper — Greg Scholes, the William S. Tod Professor of Chemistry, and his graduate student Lei Tian —   contributed insights into the role of blue light using a variety of laser experiments.

Park also determined which metal catalyst in the vast expanse of the periodic table would be the most effective in carrying out the desired reaction. Jumping off from previous lab work done with rhodium — another rare, expensive metal catalyst — he quickly zeroed in on iridium.

While scientists are not yet ready to jettison Haber-Bosch, the Chirik lab’s proof-of-concept is an important early step.

“We haven’t made ammonia yet catalytically. We have a long way to go on that goal,” said Chirik. “But it’s this idea of learning how to make these weak bonds that is so important.

“The thing I like about this research is, it’s different. It’s fundamental chemistry, as basic as you can get. Nobody’s opening a plant on this research tomorrow. But we’re really excited about the concept, and we really hope that other people do this chemistry in other contexts.”