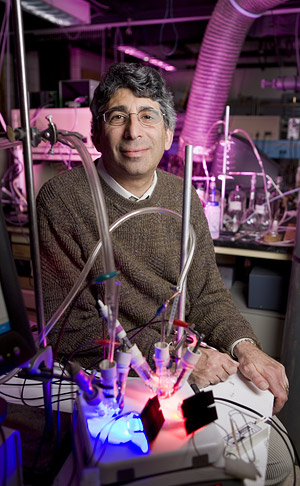 Chemistry professor Andrew Bocarsly keeps watch as carbon dioxide and water are converted into methanol and oxygen with visible light-emitting diodes, which are used to simulate sunlight in the laboratory. (Photo: Brian Wilson)

What it does: Carried out in a special photoelectrochemical cell, this process enables the conversion of carbon dioxide into organic fuels, such as methanol, using visible light and water.

Inspiration: Interest in the conversion of carbon dioxide into usable fuels was sparked during the 1973 oil crisis, but the amount of energy required to activate the reaction presented a tremendous hurdle. Bocarsly and his colleagues first published a novel way to lower this barrier in 1993, which went largely unnoticed for a decade until concerns about global warming and energy security caused a resurgence of interest in the technology.

Commercialization status: Liquid Light Inc., established in October 2009, has licensed this process from Princeton and is making rapid progress toward the establishment of a viable technology.