Name: David MacMillan, the A. Barton Hepburn Professor of Organic Chemistry and chair of the Department of Chemistry 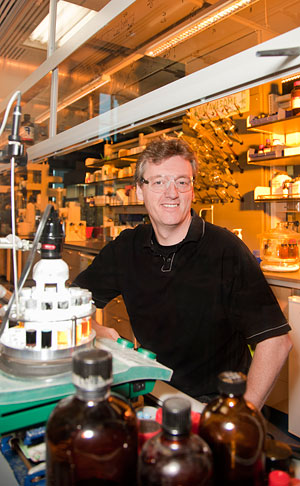 Using the OrgCAST technology for accelerating drug discovery, researchers in the lab of chemist David MacMillan were able to produce 4 million drug-like molecules -- a massive and diverse collection that previously would have taken decades to amass. (Photo by Brian Wilson)

What it does: The first step toward developing a new medication is finding a molecule that interacts with a biological target, such as a particular enzyme or receptor, to prevent a health-threatening problem from occurring and causing disease. It's often a numbers game: The more drug-like molecules a scientist has to work with, and the more diverse their structure or shape, the more likely the scientist is to find a good fit.

The OrgCAST method developed in MacMillan's lab relies on a technique called cascade catalysis to produce complex drug-like molecules rapidly and effectively. In just four months, MacMillan and his colleagues were able to produce 4 million such molecules -- a massive and diverse collection that previously would have taken decades to amass.

Even after a molecule that interacts with the target has been identified, the work is far from done. The next step in the process is to "expand around" the molecule, as industry insiders would say, by adding different chemical building blocks in different locations with the goal of creating an effective pharmaceutical compound. The OrgCAST technology enables the development of 4,000 to 8,000 related sister molecules in just one month, shaving years off the conventional drug-development process.

"You can think of targets as locks, and drug-like molecules as keys," MacMillan said. "If you have millions of keys of different shapes and sizes, it's much more likely you'll find the one you need to fit a given lock."

Commercialization status: A patent is pending and the technology has been licensed to Chiromics LLC, a Princeton-based company co-founded by MacMillan, Reider and Kim.