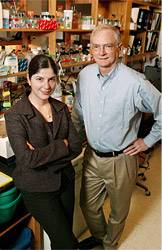 The technology transfer process allows Princeton discoveries to be translated into beneficial technologies and products. Ileana Cristea (left), an assistant professor of molecular biology, and Thomas Shenk, the James A. Elkins Jr. Professor in the Life Sciences, have discovered that enzymes called sirtuins have antiviral activity, a finding with potential benefits in treating viral diseases. Their discovery was made possible by the collaboration between two distinct areas of biology, proteomics (Cristea) and virology (Shenk). 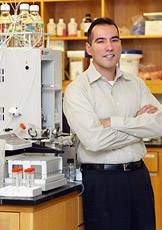 Benjamin Garcia, an assistant professor of molecular biology, is exploring how proteins called histones can play a role in controlling genes involved in cancer. 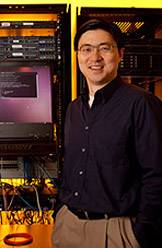 Mung Chiang, a professor of electrical engineering, uses this back of computer servers and other devices to search for better ways to deliver data through digital communications networks. 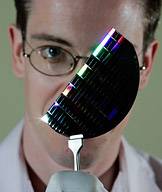 Michael Austin, who received a Ph.D. in electrical engineering from Princeton in 2005 and currently is director of consumables at BioNano Genomics, holds a silicon wafer etched with nanochannels that can separate individual molecules of DNA.


From life-saving drugs to technologies that make people's lives easier, Princeton University researchers continually bring innovations to the marketplace for the benefit of society. Each year, about 300 members of the University research community engage in transferring their discoveries into products and services, according to the University's Office of Technology Licensing.

This year, the discoveries of Princeton inventors include a technique that could help drug companies uncover new cancer medicines; a technology that could reduce the high cost of monthly smartphone data plans; a new class of broad-spectrum antiviral drugs; and a DNA-analysis technology that processes thousands of individual molecules at a time.

These four technologies and the inventors behind them were among those honored Dec. 8 at Celebrate Princeton Invention, an annual event started in 2009 that brings University innovators together with industry partners and investors interested in commercializing Princeton discoveries.

"The inventions on display at Celebrate Princeton Invention are perfect examples of what Princeton's technology transfer process is all about — enabling the development of promising discoveries, often serendipitous, into products and services that are of great benefit to society and the economy" said A.J. Stewart Smith, dean for research and the Class of 1909 Professor of Physics at Princeton. 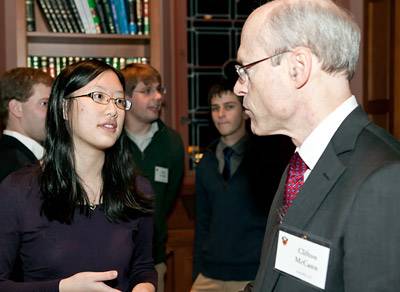 At the Celebrate Princeton Invention event held at Princeton on Dec. 8, graduate student Carlee Joe-Wong (left), who does research in the lab of electrical engineer Mung Chiang, speaks with Clifton McCann of the corporate law firm Venable LLP located in Washington, D.C. (Photo by Brian Wilson)

Over the past five years, University inventors have filed about 80 invention disclosures each year. Additionally, Princeton has been issued between 30 and 40 patents annually, said John Ritter, director of the Office of Technology Licensing, which handles the University's technology transfer activities, including filing invention disclosures and patent applications, helping to find corporate partners to license patented technologies, and assisting in the formation of startup companies.

"We pride ourselves in being very service oriented and working very closely with faculty members," Ritter said. "Often the easiest way to decide if a discovery is patentable is [for researchers] to just pick up the phone and call us."

By bringing Princeton discoveries to the marketplace, the University fills an important obligation to help transform the results of federally funded research into products and services for public benefit. The University also earns significant royalties and licensing fees, which have been used to pay for projects such as the new Frick Chemistry Laboratory. In 2010, Princeton earned nearly $96 million of income from these sources, the majority of which came from the sale of Alimta, a cancer drug discovered by Edward Taylor, the A. Barton Hepburn Professor of Chemistry Emeritus.

Among the innovations highlighted at Celebrate Princeton Invention this year was work by three faculty teams and one startup company, headed by a former postdoctoral researcher at Princeton; brief descriptions follow: 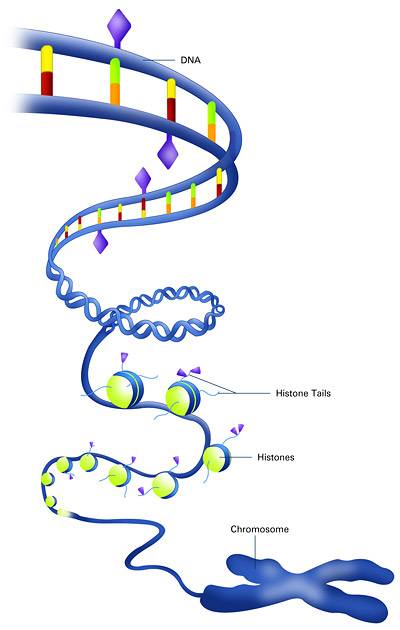 A DNA strand (blue) wraps around histone proteins (green) that can control gene activity through modifications (purple triangles) that help determine whether genes will be activated or silenced. Molecular biologist Benjamin Garcia is studying how these epigenetic modifications are involved in diseases such as cancer. (Image courtesy of the National Institute of General Medical Sciences)

An assistant professor of molecular biology, Benjamin Garcia is interested in how proteins called histones can play a role in controlling genes, and as a result, health. These histones cling to DNA and direct whether it is active or silent. Changes or modifications to these histones make up the "epigenetic code," and certain changes are thought to promote cancer and other diseases.

Garcia and his colleagues have developed a technology to isolate individual histones and the gene to which they are attached. The technique is called reverse chromatin immunoprecipitation, or "Reverse ChIP."

"We are developing a method for researchers who want to look at only the histones on a certain gene of interest, so for example, involved in cancer," said Garcia, who collaborates with Gary LeRoy, a former postdoctoral researcher in Garcia's lab, and Johannes Dapprich of Generation Biotech, a biotechnology company in Lawrenceville, N.J.

A patent application has been filed for the technology as a way to screen drug candidates for treatment of cancer that arises from epigenetic changes.

Now working in laboratories on the same floor of Lewis Thomas Laboratory, Ileana Cristea and Thomas Shenk started collaborating about seven years ago, while Cristea was a postdoctoral researcher at Rockefeller University before coming to Princeton in 2009. In their latest partnership, Cristea, an assistant professor of molecular biology, and Shenk, the James A. Elkins Jr. Professor in the Life Sciences, have discovered that viral infections can be stemmed by enzymes called sirtuins, a finding with potential benefits in treating some diseases.

Their discovery that sirtuins have broad antiviral activity suggests that drugs that amplify sirtuin activity could be used to treat a number of viral diseases. "This collaboration between our labs has allowed us to integrate quite distinct fields of biology," said Cristea, who studies proteins whereas Shenk studies viruses. "This is what makes it such a fruitful collaboration," she said.

A patent application has been filed on sirtuin activators as broad-spectrum antiviral therapeutics.

Professor of Electrical Engineering Mung Chiang likes to compare smartphone use to an all-you-can-eat Chinese restaurant where the customers come back hungrier every day. "Cellphone companies cannot meet the demand for downloading videos and other apps that people want to use, so they've had to move to tiered data plans and raise prices," Chiang said.

Given the growing demand to access the Internet and wireless services, Chiang and his team have developed a software solution for optimizing the performance and robustness of communication networks called TUBE, short for "Time-dependent Usage-based Broadband pricing Engineering." 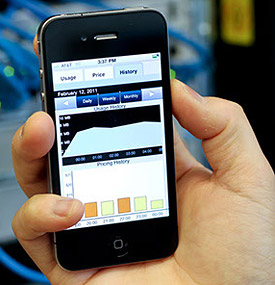 Chiang's team has developed a software system that computes and delivers the right pricing incentives to help Internet service providers meet the challenges of growing bandwidth demand while providing users with ways to save on their monthly bills. (Photo by Frank Wojciechowski)

TUBE surveys how individuals use their smartphones and automatically figures out ways to shift downloads to off-peak hours. TUBE provides pricing incentives to meet the challenges of growing bandwidth demand while giving users choices to save on their monthly bills.

The project has received support from a National Science Foundation initiative to extend Internet service to rural and underserved areas, and the team is piloting the technology with a provider in Alaska.

Chiang's co-inventors include postdoctoral researchers Sangtae Ha and Soumya Sen and their teams as well as Carlee Joe-Wong, who began this project while an undergraduate and is now a first-year graduate student in applied mathematics. Joe-Wong called the experience of turning a theoretical model into a patentable technology "eye-opening." She said, "It was one of the factors that induced me to stay at Princeton and continue my education here." 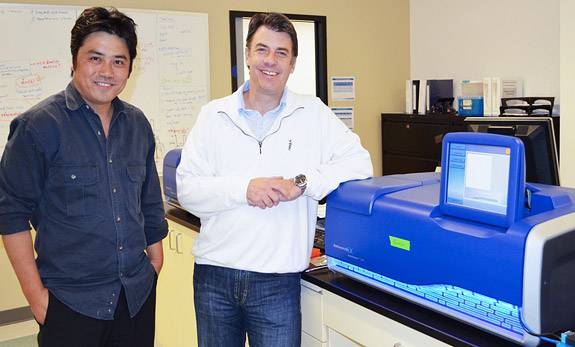 Han Cao (left), a former postdoctoral researcher at Princeton and now chief scientific officer at BioNano Genomics, and Erik Holmlin, president and CEO of BioNano Genomics, oversee a company that is developing and marketing a genomic analysis technology based on Princeton inventions. (Image courtesy of BioNan Genomics)

The team developed nano-sized channels etched in silicon materials that could separate individual molecules of DNA so that they could be studied further.

Working with the Office of Technology Licensing, the team patented the discoveries and today, Cao is chief scientific officer of BioNano Genomics, a startup company that markets the nanoAnalyzer, a machine for detecting mutations and other features in DNA molecules.

Other inventors honored at Celebrate Princeton Invention were: Edgar Choueiri, professor of mechanical and aerospace engineering, for his three-dimensional sound system; Robert Prud'homme, professor of biological and chemical engineering, and his team for the creation of Flash Nanoprecipitation, a technique for encapsulating drugs inside nanoparticles to improve their delivery to disease sites in the body; Jean Schwarzbauer, professor of molecular biology, together with Jeffrey Schwartz, professor of chemistry, for coatings that can be applied to artificial hips and other medical implants to keep them from becoming dislodged in the body; and Robert Cava, the Russell Wellman Moore Professor of Chemistry, Nai Phuan Ong, the Eugene Higgins Professor of Physics, and Ali Yazdani, professor of physics, for innovative materials called topological insulators that have the potential to improve electronic devices.