Most term papers are evaluated by one or two people, but Carlee Joe-Wong's will be checked by hundreds.

The paper, completed in 2010 as part of a junior-year independent project at Princeton University, has evolved into a research project involving wireless operators like AT&T and 1,000 participating wireless customers with mobile data plans. Along the way, it has also led to the development of a popular free app.

Titled "Time-Dependent Broadband Pricing: Mathematical Models and Optimization Solutions," Joe-Wong's work explored ways that wireless companies could reduce congestion by varying their prices depending on the time of day. The mathematics behind her analysis was so innovative that her professor, Mung Chiang, suggested that she continue to pursue the approach with his laboratory team.

"I had no idea it would turn into a real trial or anything of the sort," said Joe-Wong, who is now a doctoral student in applied and computational mathematics at Princeton. "I was hoping it could be published as a research paper, but I didn't expect it to go further than that." 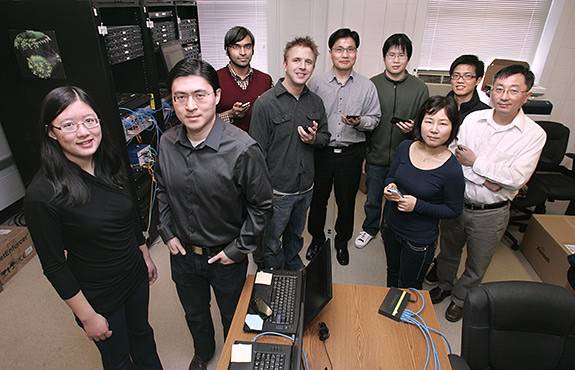 A project Carlee Joe-Wong (front left) pursued as a Princeton junior has grown into a major research initiative in the lab of Mung Chiang (front right), a professor of electrical engineering, to explore how to make smartphones smarter. Joe-Wong, now a doctoral candidate in applied and computational mathematics, is part of a research team in Chiang's EDGE Laboratory working to apply mathematical research to propose fundamental improvements in communication networks, bridging theory and practice. (Photo by Frank Wojciechowski)

It is the kind of project that Princeton's EDGE Laboratory was put together in 2009 to pursue. Chiang, an electrical engineering professor and the lab's director, said the lab applies mathematical research to propose fundamental improvements in communication networks, bridging theory and practice.

The current problem the project is grappling with is driven by the increasing congestion on wireless networks caused by the proliferation of wireless data services. Wireless cloud services, video and apps are gobbling up bandwidth faster than wireless operators can expand their capacities, Chiang said.

Soon after Joe-Wong began working with the EDGE Lab in early 2010, Chiang suggested adapting the paper's thesis for a real-world trial. Sangtae Ha, an associate research scholar in electrical engineering, began developing the trial plan and infrastructure for the work, and Soumya Sen, a postdoctoral research associate, joined the team soon afterwards. The project's team and scope expanded further in the past year.

The original work focused on time-dependent pricing and shifting traffic to off-peak times by using incentives to encourage consumers to access the network at low-congestion periods. To test this, Chiang's team recruited 50 members of the University community for a pricing experiment that began in the summer of 2011. Volunteers used the lab's time-dependent pricing system and the lab passed along the savings the participants achieved compared to their normal provider charges.

"We said we will pay your current Internet bills, and then we will charge you according to our time-dependent algorithm," Joe-Wong said.

Time-dependent usage is not new in other sectors of society. In its simplest version, transit agencies charge riders less for travelling at off-peak hours and more during rush hour. When mobile voice was charged based on a quota, telephone companies used time-dependent pricing by charging callers less to make calls at night or on weekends.

Joe-Wong said that relatively simple techniques, such as creating low-cost "off-peak periods," do not work well for mobile data, because data consumption behavior is both more complex to track and easier to shift than commuting or phone-call patterns. The goal of the effort is to minimize the stress on an overburdened wireless system and allow wireless operators to reduce cost while providing choices to consumers. The trick is to balance the pricing system to move just enough people to less congested times to smooth out the system.

"The first thing we need to do is measure and model usage throughout the day," Joe-Wong said. "Then we need to gauge people's reaction to the prices. Depending on how deep the discounts are and what kind of service experience is expected, people will shift more or less of their usage. So we set the prices accordingly."

But it is not quite that simple. The EDGE Lab team's initial trial found that people's reactions to discounts are not consistent.

"My view of a 50 percent discount might be different today than it was six months ago," Joe-Wong said. "People's reactions changed over time."

This is where the mathematical sophistication comes into play. Chiang's team constructs mathematical approaches that can use data on consumers' past wireless usage to actually learn how time-dependent pricing affects customers' behavior. They use that analysis to evaluate and predict the most effective prices for balancing network use.

While the lab members were working on the trial, they also developed a free app that would allow wireless data consumers to easily monitor usage on their devices. Called DataWiz, the app works across nearly all types of smartphones and is available through the Apple and Google app stores. At its peak, DataWiz was one of the most popular free apps, and since its launch in late September, users have downloaded it more than 140,000 times.

"Mobile consumers today need to intelligently manage their data," Chiang said. "What the DataWiz app does is tell you when, where and what app used how much of your quota. It gives you a visualization and recommendations to help track your mobile data usage. It also highlights a shift in wireless network architecture: enabling consumer devices to become part of the network management system for the operators."

A planned update will also make recommendations for balancing data downloads among different devices and will advise consumers on when they can switch from cellular wireless to WiFi.

The team gained insights into how consumers use data through the Princeton trial. And they were able to create algorithms to learn such changes in behavior and to adjust pricing accordingly. The results were published at a major networking conference, ACM SIGCOMM, last August. The overall project has produced more than five publications at top-tier venues, and an edited volume contributed by many research groups in academia and industry.

"We organized the first Smart Data Pricing (SDP) industry forum at Princeton with about 20 leading U.S. companies in the wireless industry, both carriers and manufacturers, who talked about what the industry collectively could do," Chiang said. For this year, the EDGE Lab and companies such as Alcatel-Lucent, Cisco and Qualcomm are organizing a series of SDP Industry Forums around the world, designed to engage hundreds of industry engineers on the emergent area of data traffic management through smarter pricing.

One of the outgrowths of that initial forum is the upcoming real-user trial between the EDGE Lab and AT&T in which 1,000 customers will try out a system in which data pricing depends on the congestion condition. For the trial, scheduled to start this summer, the team will place a pricing indicator on the customers' phones next to the battery indicator that will allow participants to quickly and easily monitor the cost of their data usage.

The team is also working with Comcast and other companies on similar plans, including projects with MTA (Matanuska Telephone Association) in Alaska to lower the cost of wireless access for rural users and with Reliance Communications in India to target a wide range of demographics.

"Network congestion drives this push toward time-dependent pricing or some other type of Smart Data Pricing to reduce congestion," Joe-Wong said. "One way to help with that is to offer more innovative plans that help shape user demand."

Chiang said the team, under the project leadership of Ha, is working on a range of approaches that move from just counting bytes to managing consumer experience. In one, businesses could share download costs with their customers in the same way that 1-800 numbers work in the phone system; for example, a restaurant could share the cost of downloading a multimedia menu. In another, software could "pre-fetch" frequently used data during off-peak hours and make it available to the user on the device when needed. Solutions to these problems are technically challenging and require the complex mathematical and engineering skills that the EDGE Lab has developed, Chiang said.

"The work at the lab has the ability to shape the industry," Chiang said. "We have smartphones. This is smart data."