Mung Chiang, an associate professor of electrical engineering at Princeton, has constructed a laboratory that simulates the global communications infrastructure, including the Internet and mobile networks. His research focuses on finding ways to meet fast-growing demand for video and other data delivered to computers and mobile devices. Here he works at a station in his laboratory designed for experiments on wireless networks, such as cellular towers used by phone companies.

Netflix, YouTube, Hulu and Skype have become household names as demand soars for movies, television shows, amateur videos, and video calls delivered via the Internet and mobile networks. As a result, this enormous thirst for moving pixels is fast outpacing the capacity to supply video to viewers' screens.

A team of Princeton researchers led by Mung Chiang, an associate professor of electrical engineering, is grappling with the problem by exploring ways to make global networks more efficient.

Chiang's team notes the statistic that, by 2015 Internet consumption on mobile devices alone -- smartphones, tablet computers such as the iPad and devices yet to be invented -- will grow by 65 times, and video will represent 70 percent of that traffic, according to the networking company Cisco.

"People take the Internet for granted, and Internet use has exploded," Chiang said. "Our success at building these incredible networks may suffer under its own weight if we don't keep innovating."

Over the past few years, Chiang and his team have methodically pieced together a replica of the global Internet and mobile networks, squeezing the scaled-down components into a laboratory at Princeton. He and his fellow researchers are using this miniaturized version of the global communications network, dubbed the Edge Laboratory, to develop new ideas and systems that will help ensure that the networking infrastructure of the future will meet consumer demand. 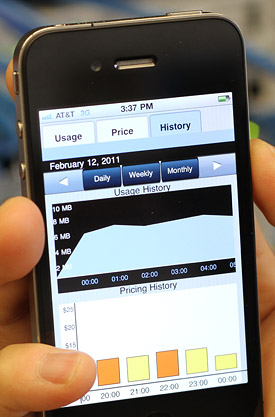 Chiang and his collaborators have developed a mobile phone application (seen here) that allows service providers to offer service plans where price is based on demand. Under such plans, consumers can lower their phone bills by downloading video and other data during off-peak hours. (Photo by Chris Emery)

Chiang's research focuses on "edge networks," technologies such as 4G, WiFi, U-Verse and FiOS, that connect computers, mobile phones and other devices to the core communications networks. The name of the lab stems from this focus and serves as a metaphor for connecting as an "edge" between academic theories and real-world applications, a rarity in the field of networking research.

One major problem that Chiang's lab is tackling is that Internet servers are inefficient at delivering content from one place to another, often routing the data through long, convoluted paths. Along with Professor of Computer Science Jennifer Rexford and their joint graduate student Wenjie (Joe) Jiang of the computer science department, Chiang is experimenting with new ways to store and deliver content with networks that could reduce Internet bottlenecks, such as distributing files to multiple servers around the world so they can be delivered to nearby users more quickly.

A major thrust of Chiang's research is helping service providers develop pricing models as consumers watch more video. "Imagine that you go to a buffet but your appetite doubles every year," Chiang said. "Service providers are saying they can't keep serving a buffet because customers are starting to eat too much. Either they have to double the price of the buffet or you eat in a different way." 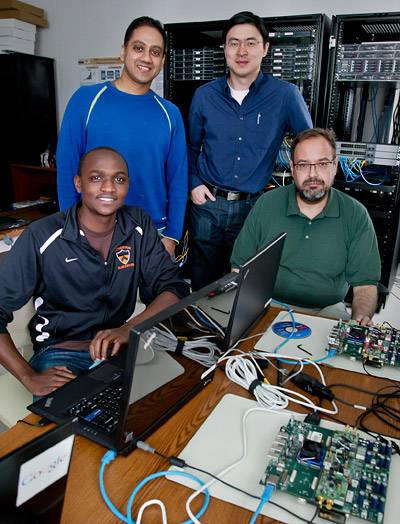 To address this, Chiang and his collaborators developed a prototype system, called TUBE, short for "Time-dependent Usage-based Broadband price Engineering," that gives consumers more information and thus control over when they use the Internet and how much they pay.

The system allows customers to track their phone usage through a mobile application and avoid downloading videos and some of the data-intensive applications during peak usage times. Customers are charged less for using the system during off-peak periods, so they can save by waiting.

If such data plans were widespread, Chiang suggests, it might help both mobile service providers and consumers. He currently is working with AT&T on a trial with 50 customers at Princeton -- faculty, staff and students -- to test the system.

"We're trying to make a difference in the actual networking world, but make a fundamental difference based on mathematical approaches," he said. "It's important that we do this here, in academia, because we need to develop long-term solutions that aren't tied to the product cycle." 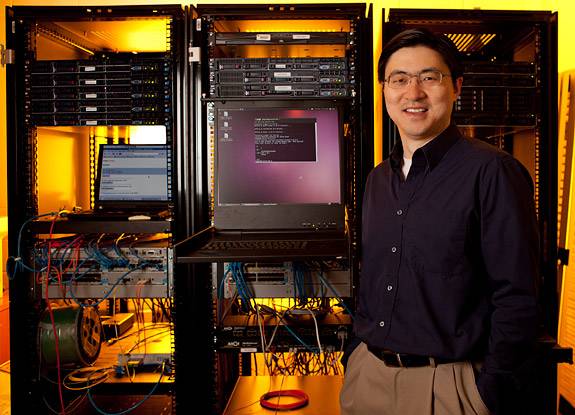 Chiang uses this bank of computer servers and other devices pictured here to search for better ways to deliver data through digital communications networks. (Photo by Brian Wilson)

Tackling a big problem on a miniature platform

To build his laboratory of miniaturized networks, which he officially unveiled at an open house in April, Chiang asked manufacturers of the computer equipment that runs various aspects of communications networks to let him hack into their proprietary systems and to experiment with new ways to deliver information from one place on the globe to another.

The Edge lab is filled with racks and tables of black boxes covered in blinking lights and connected to one another by wireless antennas and bundles of networking cables snaking around the room.

Most of the boxes are servers, routers and other computers that are the workhorses of modern digital networks. Others are machines Chiang and his students use to experiment on their mock Internet. Along one windowsill, a row of antennas, each about the length of a pencil, function as miniature versions of the cellular towers operated by companies such as Verizon Wireless and AT&T.

The lab is also dotted with devices more familiar to the average person: laptops, tablet computers, smartphones and a high-definition television mounted to one wall. The researchers use these devices to understand how altering the way the network operates changes the end-user's experience. 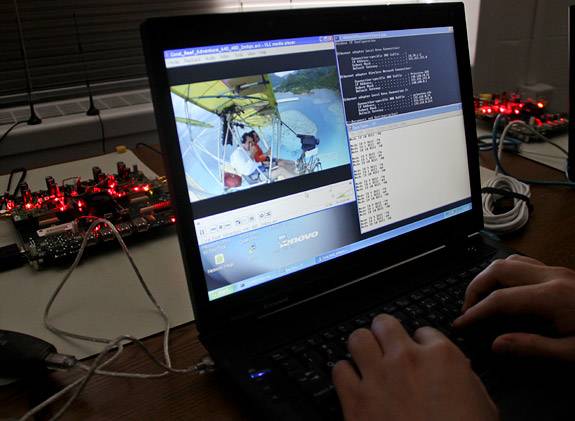 A member of Chiang's team watches video delivered to a laptop through an experimental wireless network. The researchers are hoping to develop more efficient methods of delivering data as demand for Internet video soars. (Photo by Chris Emery)

H. Vincent Poor, dean of the School of Engineering and Applied Science and an expert in communications networks, said Chiang's research offers a unique combination of mathematical rigor and practical impact.

"Netflix streaming a high-definition movie to the TV in our family rooms, watching YouTube on our iPhones or laptops, talking on our cell phones -- these are just a few examples of times when we rely on edge networks," Poor said. "Mung's research on networks, especially edge networks, has been at the forefront of improving the quality of these experiences and in creating seamlessness among them.”

Among the benefits of having a laboratory that works closely with industry, Chiang said, is that students get hands-on experience applying what they're learning to practical problems. "They learn network theory and then get to apply it to real networks," he said. "They can actually see the things they are working on, so it's more intuitive and engaging."

Carlee Joe-Wong, a mathematics major who graduated in May after having worked in Chiang's lab since the fall of 2009, said the experience changed her perceptions of how research is conducted. "I always had this impression that academia and industry are completely separate," she said. "It's been eye-opening to see that companies are interested in our work and want to put it to use."