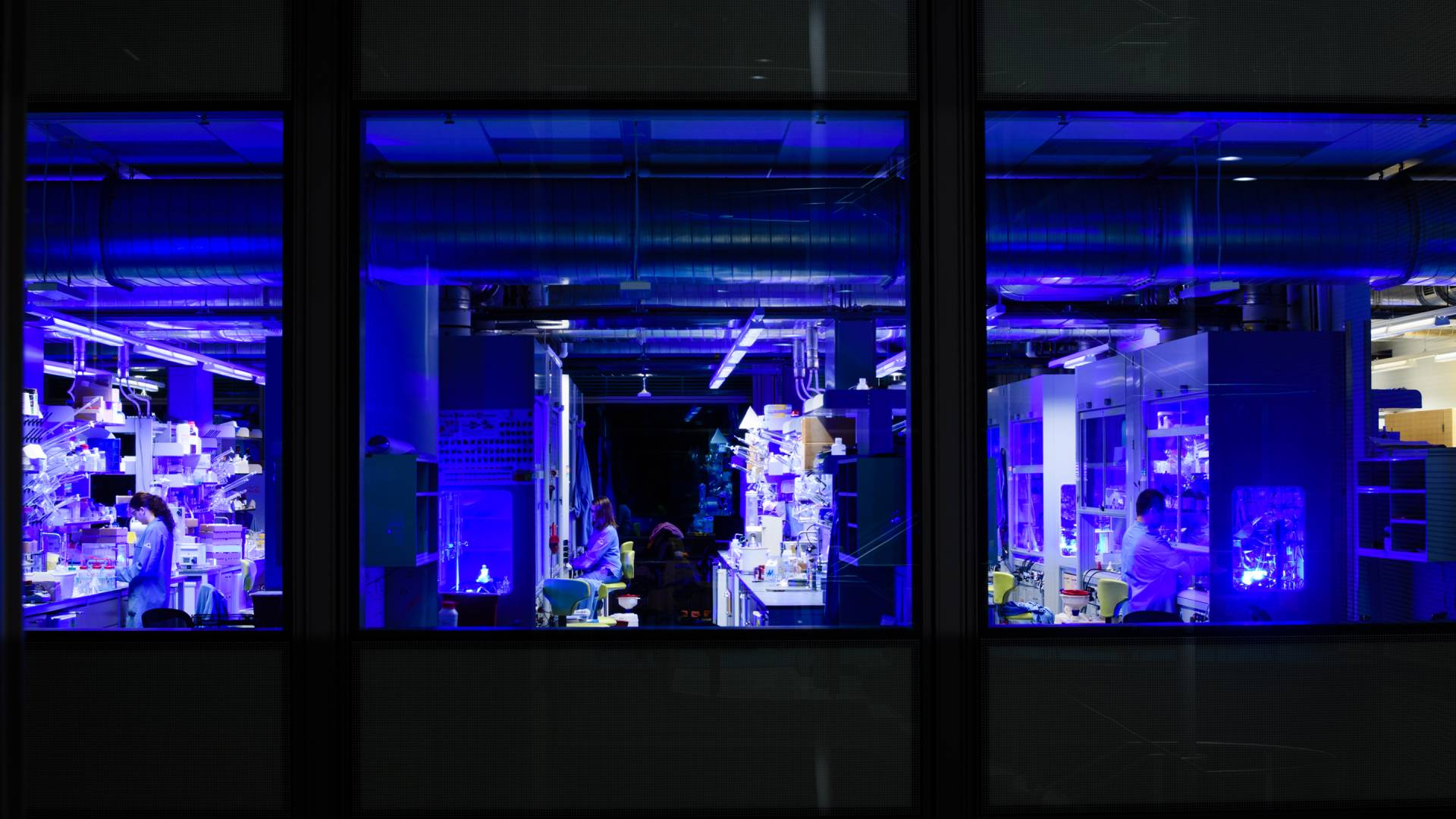 David MacMillan’s team at Princeton University found a new way to use ordinary blue light shining on an iron catalyst to create carbon-carbon bonds that are otherwise difficult to form. The molecules constructed through this process fit with drug targets as precisely as “a key going into a lock,” said researchers.

The challenge to build a better molecule is a constant for researchers working with Princeton’s David MacMillan, who in October won the Nobel Prize in chemistry. The latest work from the team, published in Science on the heels of MacMillan’s win, advances that mission with a striking mechanism for forming carbon-carbon bonds that have traditionally been difficult to make.

Known for scrapping tried-and-true methods in search of new efficiencies, MacMillan replaced the conventional steps used for decades to build these molecules with entirely new steps that eliminate many of the earlier drawbacks.

To do this, the researchers drew their inspiration partly from nature. 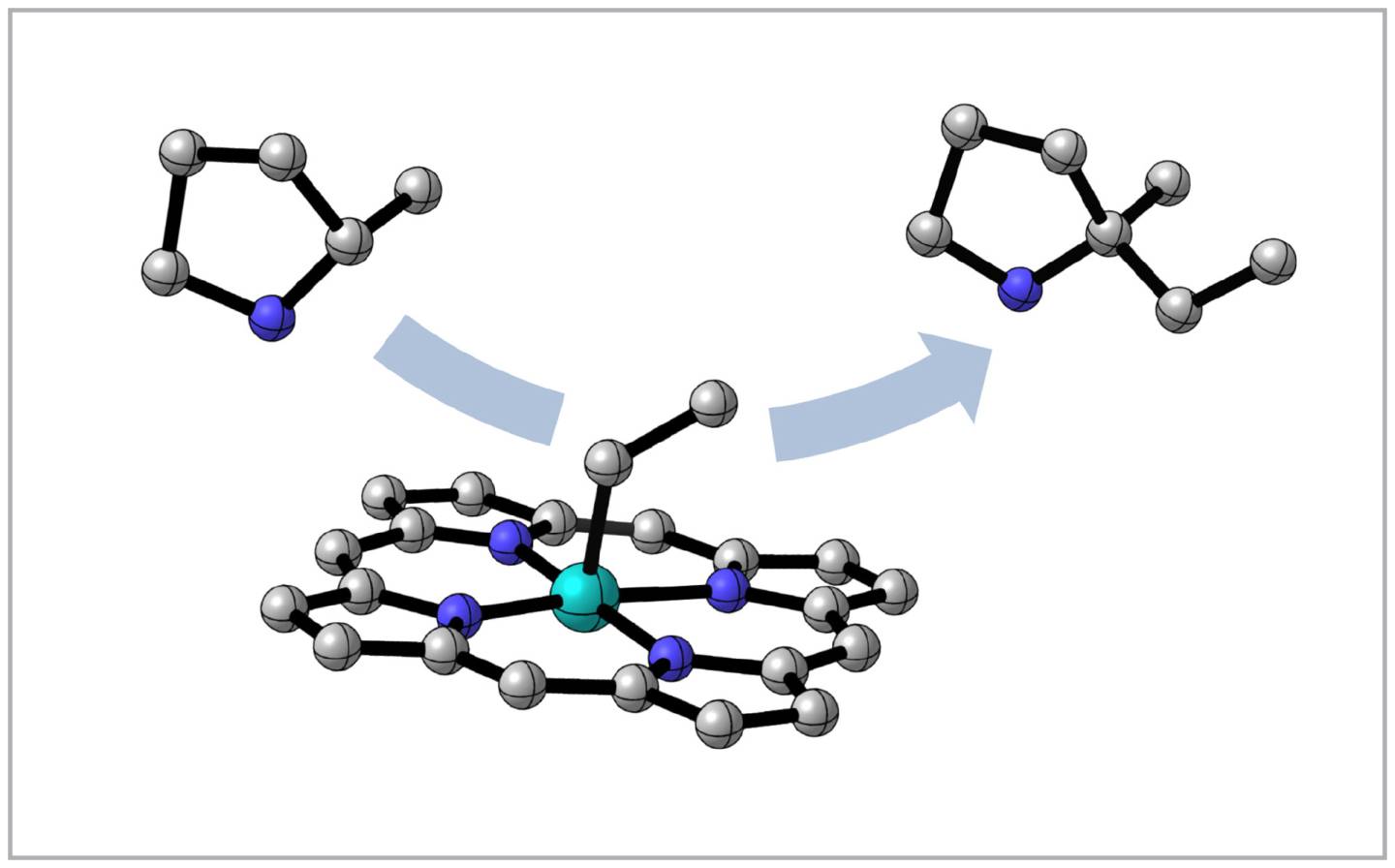 This schematic illustrates the mechanism used for the new carbon-carbon bonds: homolytic substitution (SH2). In this process, a substrate molecule (top left) displaces a chemical group from the iron catalyst (middle) to form a product molecule with a new carbon-carbon bond (top right). This mechanism was well established in biology but had not been broadly utilized in organic chemistry to forge carbon-carbon bonds, the fundamental linkages of pharmaceutical molecules.

Nature uses a straightforward method to protect the environment that fosters carbon-carbon bonds by cloistering key, fragile intermediates (the products of steps along the way) inside enzymes. This is difficult to reproduce in a lab even though a mechanism for doing so, called homolytic substitution or SH2, is well understood in other fields, like biology.

That mechanism was generally discarded by chemists as improbable, but MacMillan is known to savor a challenge.

With their expertise in photoredox catalysis, a platform that drives reactions with light instead of harsher factors, the chemists in MacMillan’s research group used the SH2 mechanism and maintained the mild environment that allows these bonds to form readily. They used iron as a reaction catalyst, rather than the traditional palladium, making for a more sustainable bond-forming system.

This generically useful “cross-coupling” method — the ability to select and bind different organic fragments — has broad implications for the pharmaceutical industry. The three-dimensional architecture of the molecules constructed through this process provides a fit with drug targets that is so precise, it has been described as “like a key going into a lock.”

“Pharmaceutical companies care enormously about carbon-carbon bonds, but it’s got an interesting name: sp3-sp3. The more carbon-carbon or sp3 content you can put into drugs, the more likelihood of success they’re going to have,” said MacMillan, the James S. McDonnell Distinguished University Professor of Chemistry.

“A drug will bond to the desired target. But what happens if it also binds to any of the millions of other targets in your body with a totally different effect, some of which is going to be unwanted? You need that molecule to be really selective and go just to the place you want it to go. The chemistry we’ve developed now allows you in a general way to do a new type of sp3-sp3 coupling that is very selective.”

The research highlights the utility of photoredox catalysis, a field flourishing alongside asymmetric organocatalysis, the technology for which MacMillan was awarded the Nobel Prize in October.

What is homolytic substitution?

Carbon is the backbone of every known biological molecule. But its very stability makes cross-coupling difficult. The previous process, for which three chemists earned the Nobel Prize in 2010, used palladium as the catalyst to jumpstart the reaction. But that process, while robust, uses three chemical steps — oxidative addition, transmetalation, and reductive elimination — with the efficiency decreasing at each step for the specific products MacMillan is trying to build.

In their paper, researchers describe the SH2 mechanism as “seldom postulated, rarely discussed, and frequently discarded as improbable.” It’s not what they set out to prove when they started the project, said Wei Liu, co-lead author on the paper and a recent postdoctoral fellow in MacMillan’s lab. But when the cross-coupling kept working, they looked more deeply into what was permitting it.

“I presented my results in group meeting, saying the reaction works but I don’t know what the mechanism is,” said Liu. “Dave suggested right away that it could be that one radical attacks the other. What it describes is actually a substitution, but he didn’t know it was called an SH2 mechanism either. It was only later, when we went back into the literature and found that people actually had descriptions of it, that we were able to identify it.”

Colin Gould, a postdoctoral research fellow in MacMillan’s lab and paper co-author, added: “Anytime you introduce a new fundamental step to bond formations, it’s going to allow you to do things that you haven’t been able to do before, and this is one example of that. It’s exciting because you could potentially open up new avenues. That’s why it’s a big advance.”