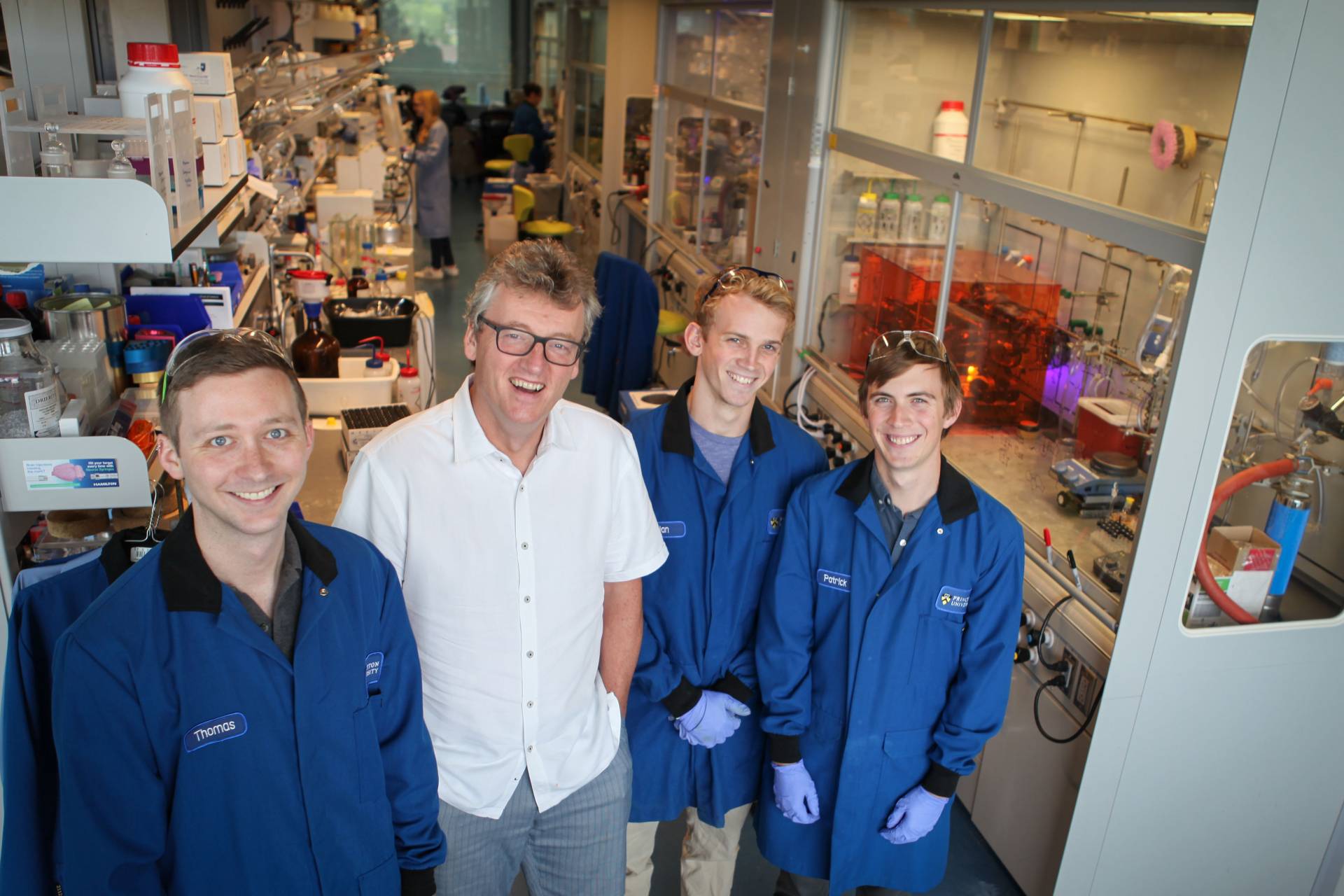 Bringing new drugs to market takes time. Laboratory testing, clinical research and U.S. Food and Drug Administration review — and all the steps in between — add up to 17 years, on average, for research evidence to reach clinical practice.

But what if organic chemists could speed up that process by providing medicinal chemists with new tools that would facilitate selective molecule activation to support drug discovery?

Researchers in David MacMillan’s lab at Princeton have found new ways to bond molecules that could significantly speed up the drug development process, he said.

“We invent completely new chemical reactions that are hopefully going to have a large impact on medicinal chemists,” said MacMillan, the James S. McDonnell Distinguished University Professor of Chemistry and the director of the Merck Center for Catalysis at Princeton.

The work of MacMillan’s research group, documented in a paper published Aug. 2 in the journal Nature, outlines approaches to “tremendously streamline ways to bond molecules, and also make new molecular couplings — it’s like Legos,” he said. He compared their method to replacing a lone carpenter with a whole construction crew. Not only can the house — that is, the drug — be built faster, but it extends the possibility of building new and different types of “houses” in the future.

The work began as an academic-industrial collaboration with Merck. While the project was developed from an academic approach, with its own disciplinary standards of intellectual rigor, it had a clearly defined end user in mind. Conducting frontline research with defined target outcomes was valuable and offered a symbiotic connection, MacMillan said.

The researchers have found new ways to bond molecules using a combination of light-driven hydrogen atom transfer and nickel catalysis. This illustrates an important and previously elusive synthetic transformation, paving the way for the development of related chemical reactions.

Prior work in this area provided powerful methods to directly functionalize specific kinds of electronically distinct carbon-hydrogen bonds, said Patrick Sarver, a graduate student and one of the paper’s co-authors.

Their method is novel, he said, because it “provides a direct route to react with carbon-hydrogen bonds that truly lack any adjacent ‘activating’ functionality. This enables direct derivatization of molecules at positions that would be completely unreactive under previously published conditions, further expanding the range of interesting, complex molecules organic chemists can make from simple starting materials in a single step.”

This should enable medicinal chemists to explore molecules that they might otherwise be unable to make, said Sarver, some of which could eventually enter clinical trials and ultimately become drugs.

Since the new reaction only requires a simple carbon-hydrogen bond as one of the coupling partners, it can improve synthetic efficiency by reducing the need to “prefunctionalize” the starting material. This translates into a reduction of preliminary steps which in turn increases the speed at which medicinal chemists can deliver new molecules for testing.

“First, from a synthetic standpoint, our new reaction provides access to a range of complex, medicinally relevant products that are currently extremely challenging to access,” Sarver said. “This has the power to enable medicinal chemists to generate a wide range of closely related compounds on scaffolds that they might otherwise be unable to investigate and could thus help to speed up the long and difficult process of drug discovery.”

Throughout the last several decades, the development of new, milder partners for cross-coupling reactions has been a major field of research — with work on palladium-catalyzed cross couplings by Richard Heck, Ei-ichi Negishi and Akira Suzuki receiving the 2010 Nobel Prize for Chemistry.

But this work from MacMillan’s group represents the first time that completely unactivated carbon-hydrogen bonds have been found to function as effective partners in a general cross-coupling reaction.

“By directly reacting with an unactivated carbon-hydrogen bond, we remove the need for those additional ‘prefunctionalization’ steps, thereby allowing chemists to take an extremely simple starting material and immediately and selectively introduce complexity,” Sarver said. “The carbon-hydrogen bonds functionalized in our reactions are, fundamentally, the ideal coupling partners: they are both widely abundant and unreactive under almost all reaction conditions.”