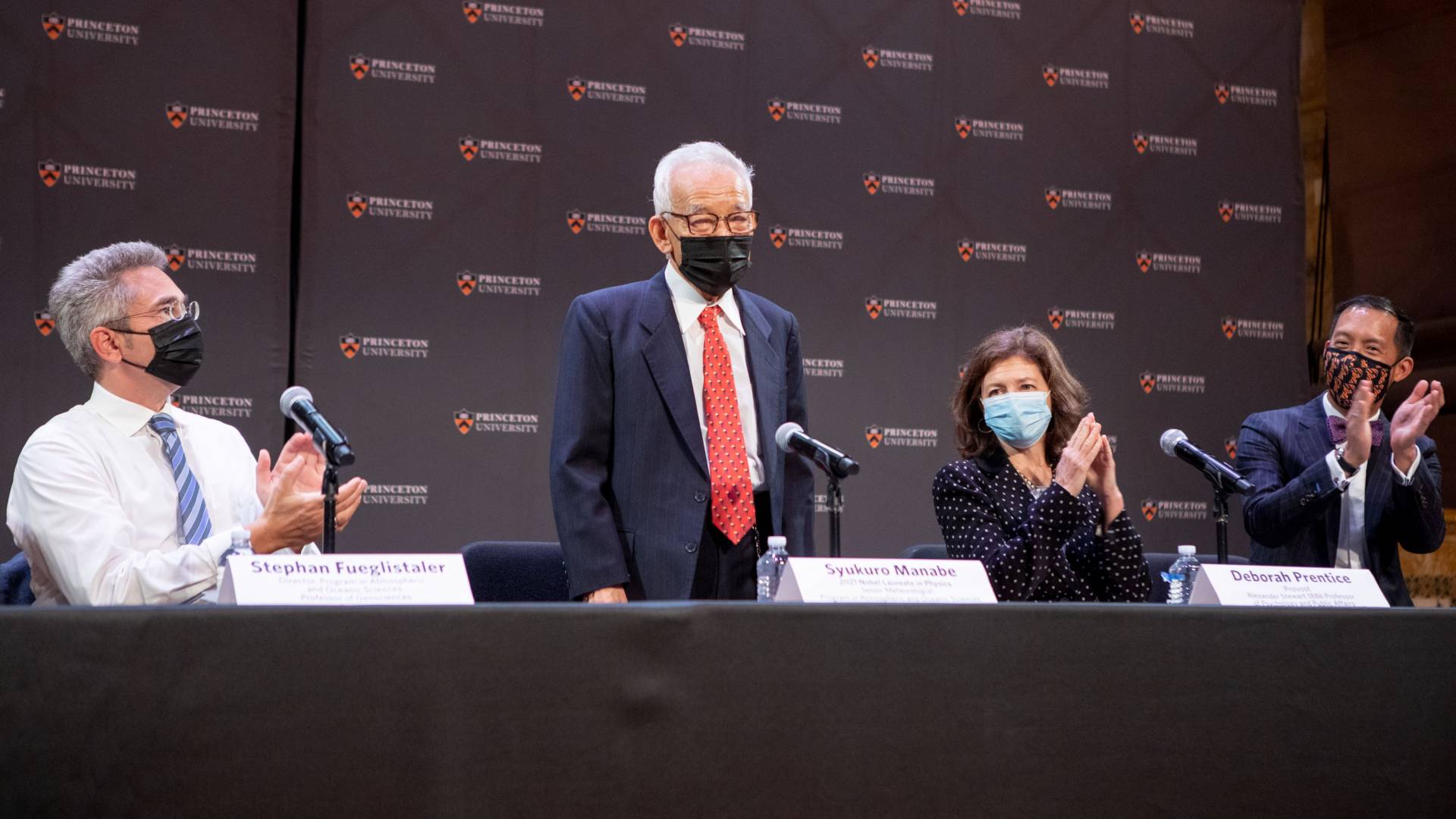 Princeton University senior meteorologist Syukuro “Suki” Manabe stands for applause during a media conference on campus Tuesday, Oct. 5, in recognition of his Nobel Prize in physics. Manabe was recognized for his climate science research, which laid the foundation for the development of current climate models. Pictured with Manabe on the stage of Richardson Auditorium are (from left to right): Stephan Fueglistaler, professor of geosciences and director of Atmospheric and Oceanic Sciences (AOS); University Provost Deborah Prentice, the Alexander Stewart 1886 Professor of Psychology and Public Affairs; and Ben Chang, deputy vice president for communications and University spokesperson.

Very early on Tuesday, Oct. 5, Princeton climatologist Syukuro “Suki” Manabe got a phone call from Sweden telling him that he had won the 2021 Nobel Prize in physics.

“I was really happy and surprised,” said Manabe, a senior meteorologist at Princeton University who is a pioneer in the field of climate change research. “I never dreamed I would win the Nobel physics prize. If you look at the list of past winners, they are amazing people who have done marvelous work. In contrast, what I have been doing looks trivial to me. But I’m not going to complain!”

By 6 a.m. Princeton time, the world knew that Manabe had won “for the physical modeling of Earth’s climate, quantifying variability and reliably predicting global warming.”

“It’s really hard to overstate Suki’s impact,” said Gabriel Vecchi, professor of geosciences and the High Meadows Environmental Institute, director of the High Meadows Environmental Institute, and deputy director of the Cooperative Institute for Modeling the Earth System. “It couldn’t have happened to a better human being. He has always been open to seeking conversation with everybody. When you talk to him, he is just curious. He wants to understand how the world works.” 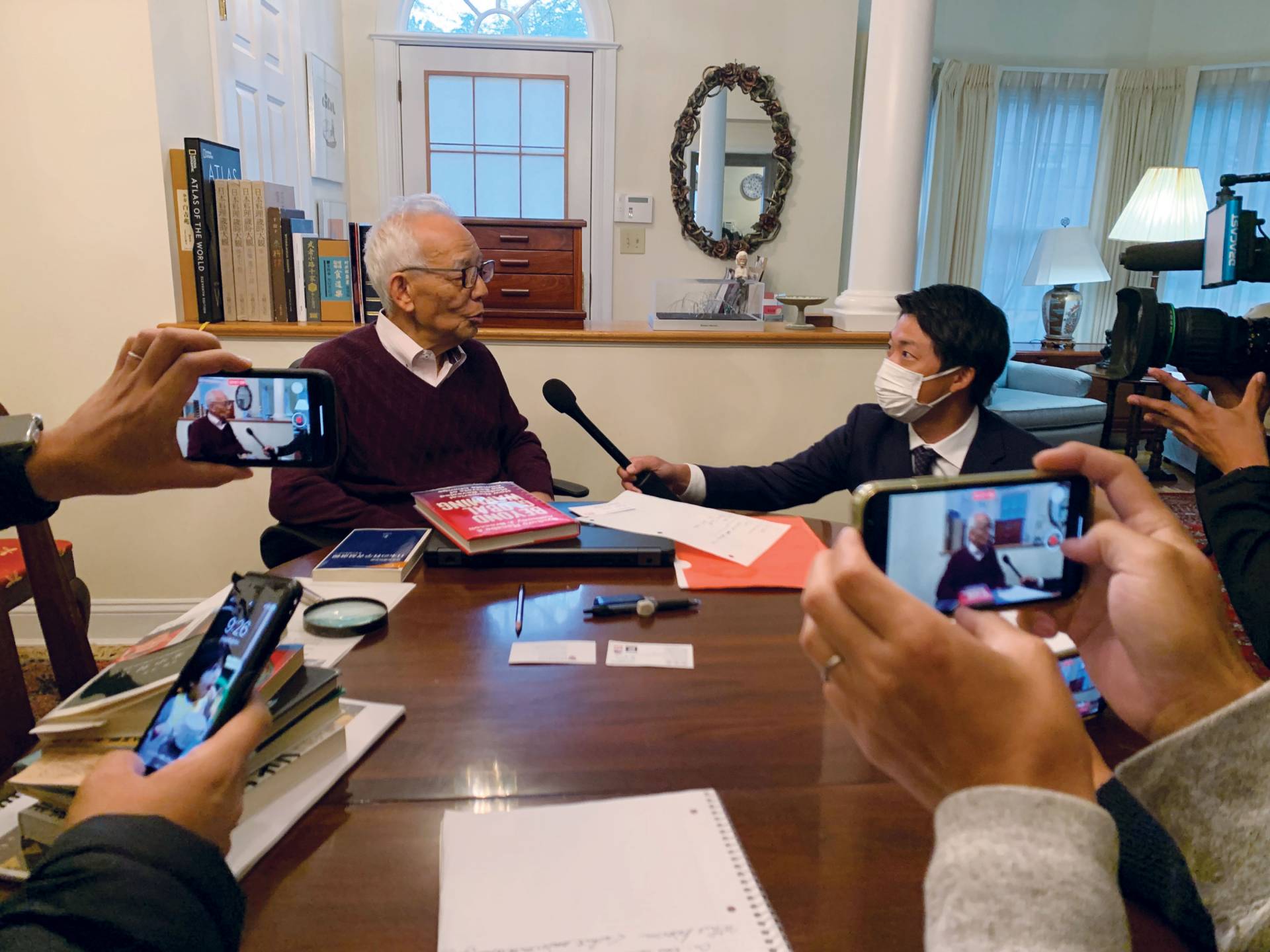 Manabe answers questions about his research career at the University and the Geophysical Fluid Dynamics Laboratory (GFDL). Manabe is affiliated with Princeton’s AOS and he was one of the founding scientists of GFDL, a national climate research laboratory that is a joint endeavor by Princeton and the National Oceanic and Atmospheric Administration (NOAA).

Read additional coverage here on the Nobel Prize announcement and comments from the University community.

“Suki Manabe is a pillar in the field of climate science,” said Denise Mauzerall, a professor of civil and environmental engineering, and public and international affairs, at Princeton. “Climate models built on Manabe’s foundation are critical tools today for predicting and analyzing how the world will change as a result of greenhouse gas emissions, and to quantify the enormous benefit of rapidly decreasing greenhouse gas emissions for life on Earth.”

Manabe, who has been on the Princeton faculty since 1968, shares one half of the Nobel Prize with fellow climate scientist Klaus Hasselmann of the Max Planck Institute for Meteorology, Hamburg, Germany; the other half goes to Giorgio Parisi of the Sapienza University of Rome, Italy. The prize amount is 10 million Swedish kroner, or about $1.1 million. 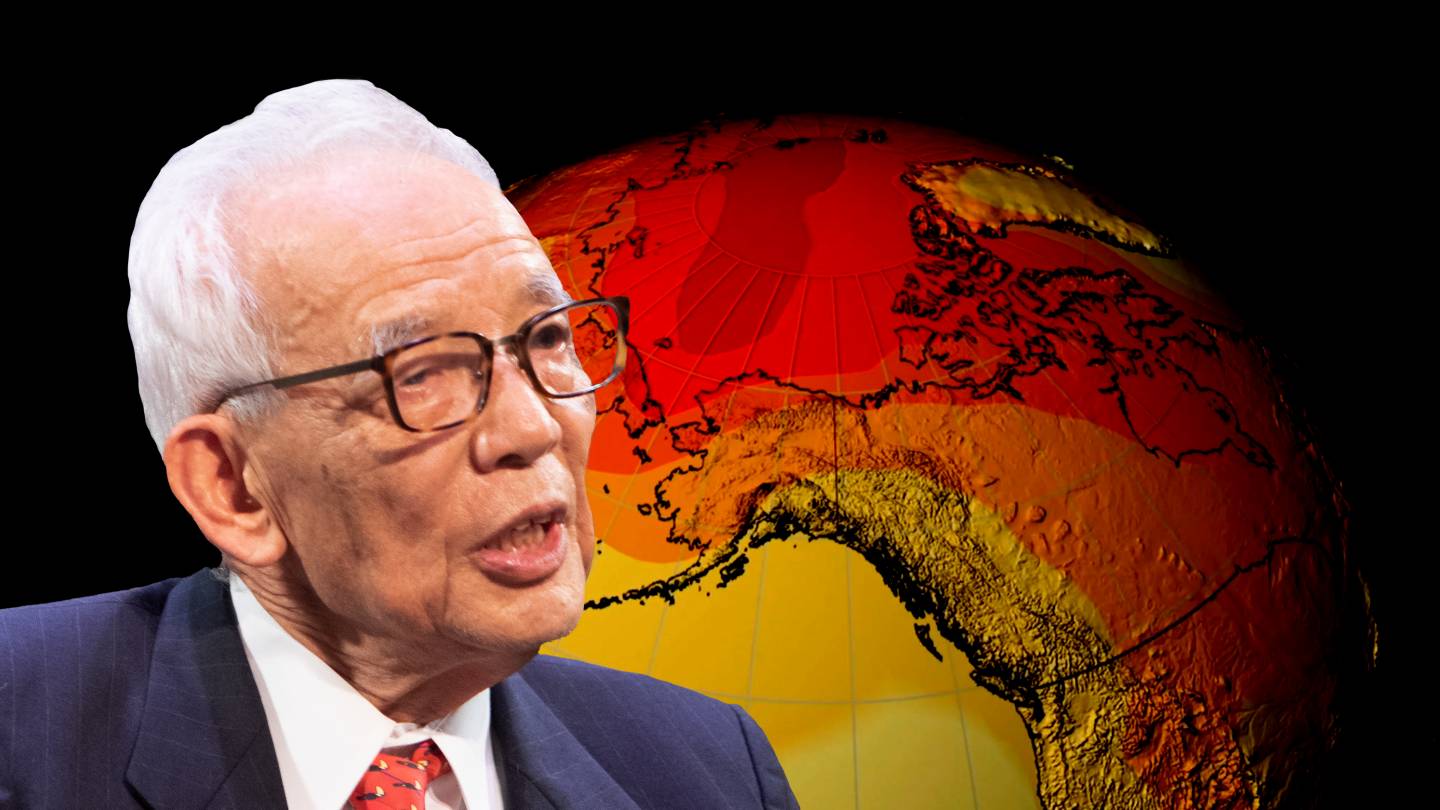 As the word of Manabe’s win spread, the Japanese-born scientist, a U.S. citizen since 1975, found himself hosting dozens of members of the world’s media in his living room, cheerily fielding wide-ranging questions in both English and Japanese.

When asked if he had a message for the world leaders gathering in a few weeks at the 26th United Nations Climate Change Conference, he said that making climate policy is “a thousand times more difficult” than making climate predictions.

He elaborated later in the day: “Climate [policy] involves not only environment but also energy, agriculture, water, and just everything you can imagine. When these major problems in society are all interwoven with each other, you can understand how difficult it is to sort this thing out.” 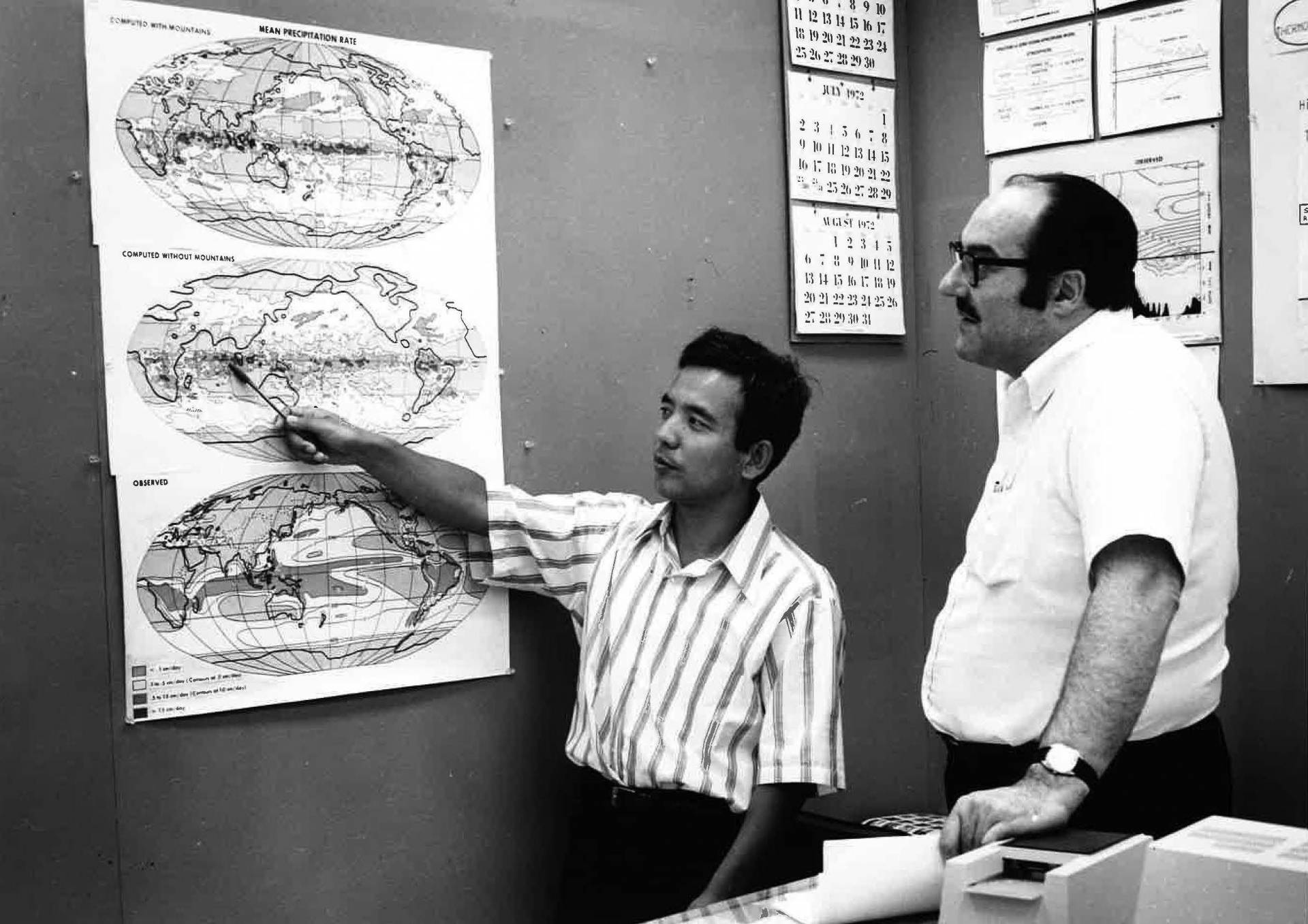 In this archival photo from the 1970s, Manabe works on research with Joseph Smagorinsky, the first director of GFDL. “In the 1960s, [Manabe] led the development of physical models of the Earth’s climate and was the first person to explore the interaction between radiation balance and the vertical transport of air masses. His work laid the foundation for the development of current climate models,” the Royal Swedish Academy of Sciences said in announcing the Nobel Prize on Tuesday, Oct. 5.

Born in 1931 in Japan, Manabe earned his bachelor’s degree in 1953 and his doctorate in 1958, both from the University of Tokyo. After graduating, he immigrated to work at the National Weather Service, which soon became the National Oceanic and Atmospheric Administration (NOAA). In 1963, Manabe moved from Washington, D.C., to Princeton to help found the Geophysical Fluid Dynamics Laboratory (GFDL), a national climate research laboratory that is a joint endeavor by Princeton University and NOAA. In 1968, he became a member of the University’s faculty.

“Our parallel careers for half a century have engaged with the same questions about how our small planet works and how to live within its constraints,” said Rob Socolow, professor of mechanical and aerospace engineering, emeritus. “I am ecstatic about Suki’s award. I have known Suki since I came to Princeton 50 years ago. He is an imp, always with a twinkle in his eye. Unfailingly polite. And deep.”

Manabe is also the co-author with Anthony Broccoli of “Beyond Global Warming” (Princeton University Press, 2020), which they wrote to help the public understand how and why climate has changed, and how it will change in the future. The book grew out of a class Manabe taught at Princeton. “It’s a short book — only 200 pages — but it took more than 15 years to write, because I had to keep boiling down, boiling down,” distilling and clarifying the science, he said.

“I hope many people will read this book,” Manabe urged. “It only has a few equations. And if you find something too technical, skip it.” 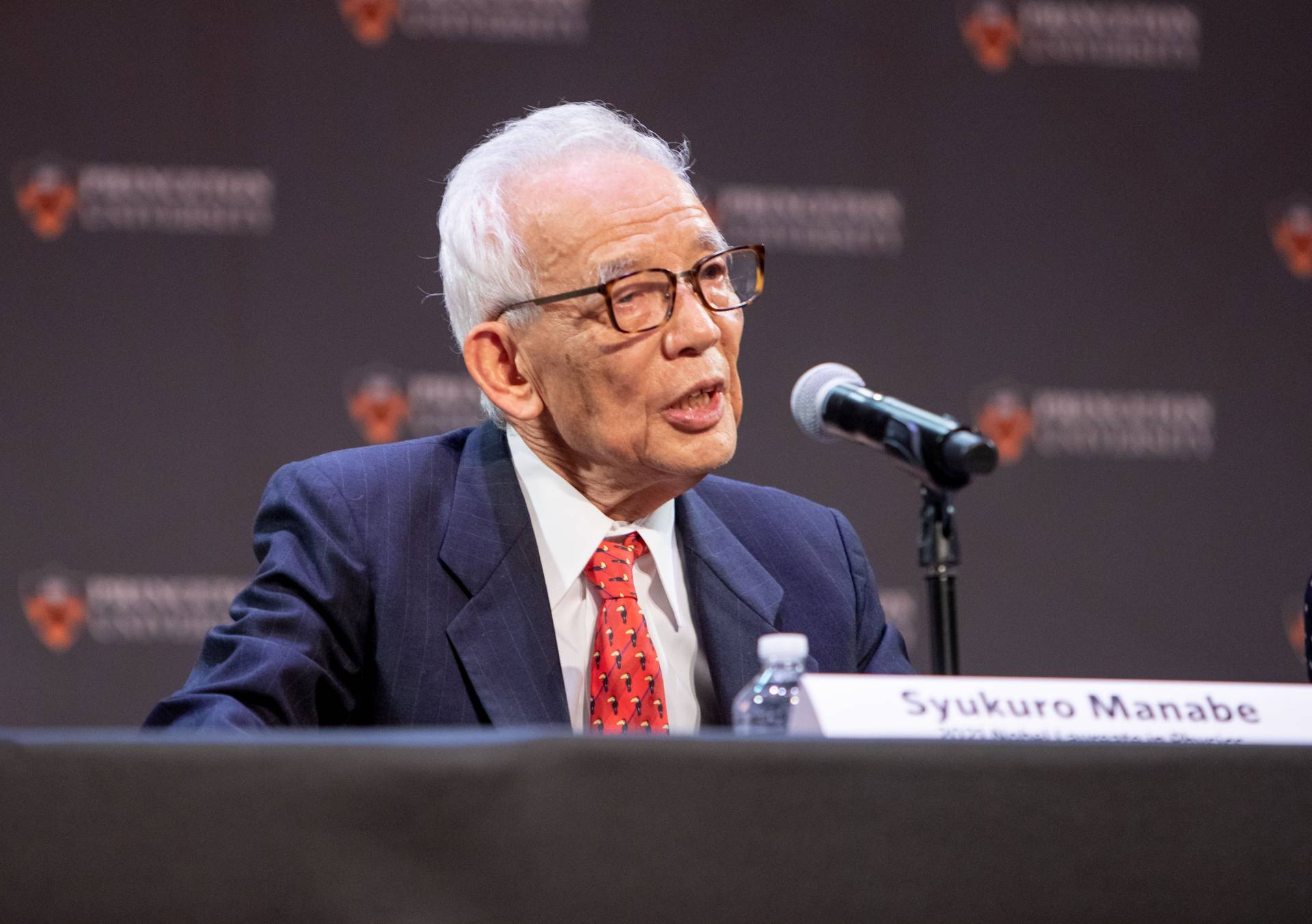 Manabe answers questions about his research career at the University and GFDL.

At the midday press conference, which began with a standing ovation, Manabe was introduced by Tom Delworth, a senior scientist at GFDL and a lecturer in Princeton’s Program in Atmospheric and Oceanic Sciences (AOS). “When Suki started his career in 1950s, the topic of global warming was quite obscure, but his inspired vision led him to make the fundamental discoveries upon which all of modern climate science rests,” he said. “His papers in the 1960s were so visionary and prescient that they are still relevant today, and I still teach them here in my class.

“I've always viewed Suki as the Michael Jordan of climate,” he continued, to a ripple of laughter. “Michael Jordan came from an outstanding university, [the University of] North Carolina, was a great basketball player, went into the NBA and was the world's best player. Suki, from a premium institution, the University of Tokyo, came to the U.S. and became the premier climate scientist in the world. Beyond what things Michael Jordan accomplished on his own, he elevated the entire NBA to iconic status, not just in the U.S. but around the world. So too, Suki, in his presence, elevates the entire field of climate science to its standing today as a field of vital and outstanding importance.” 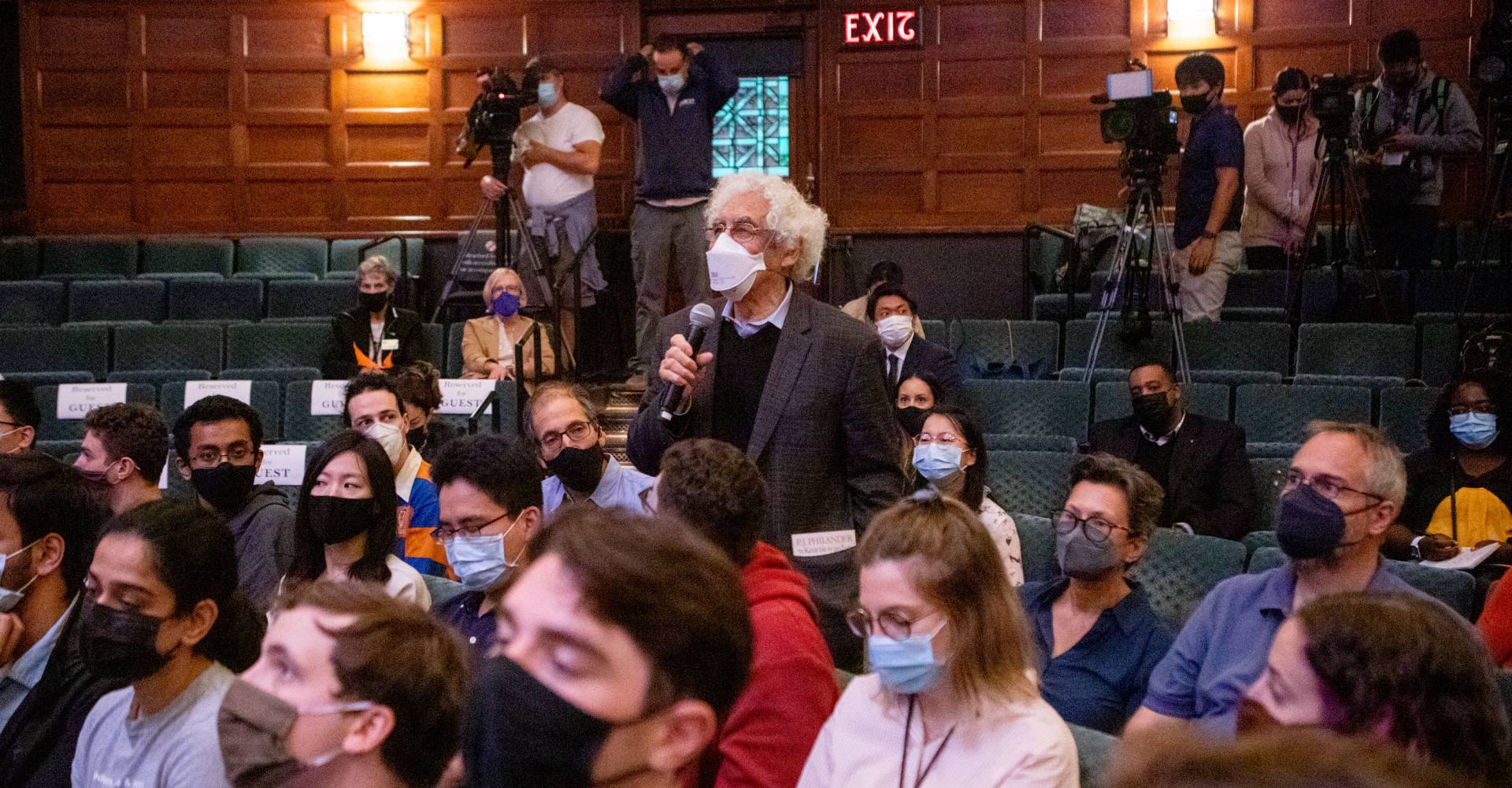 S. George Philander, the Knox Taylor Professor of Geosciences, Emeritus, asks a question of Manabe during a media conference in Richardson Auditorium. More than 100 faculty, staff, students and media attended the event following Manabe’s win of the 2021 Nobel Prize in physics.

Manabe’s brief remarks at the conference were punctuated by gentle chuckles from the audience, made up of more than 100 students, faculty and staff.

“It is a great surprise and honor to be chosen by the Royal Swedish Academy of Sciences to receive the Nobel Prize, established through the generosity and farsightedness of Mr. Nobel,” he said. “I would also like to thank the Geophysical Fluid Dynamics Laboratory of NOAA and Princeton University, where I have enjoyed exploring climate change of not only the industrial present, but also the geological past, during the last several centuries. I have had a really great time. Thank you!” 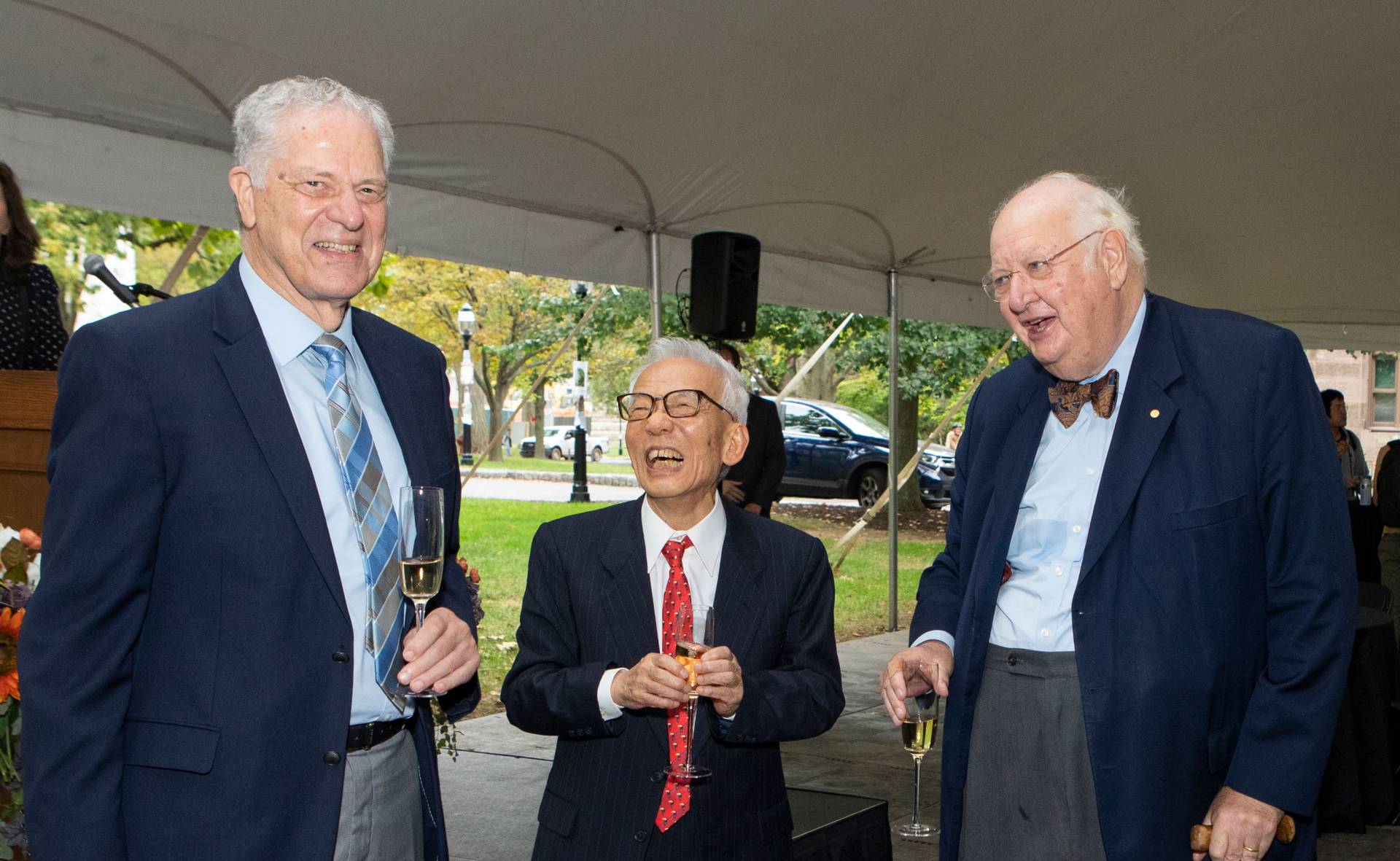 “He is a pioneer in this field and a pioneer for humanity,” said Princeton University Provost Deborah A. Prentice. “This is a very, very special occasion for Dr. Manabe, the laureate; his family; and his country. In this case, both Japan and the United States can beam proudly.”

University President Christopher L. Eisgruber was attending a memorial service and could not attend.  He extended a  congratulatory message from the West Coast to Manabe and fellow 2021 laureate David MacMillan, who was awarded the Nobel Prize in chemistry.

“We usually associate the Nobel Prize in physics with stellar music and faraway galaxies. This year, this prize is devoted to someone who devoted his life to the study of our very home,” said Stephan Fueglistaler, a professor of geosciences and the director of both AOS and the Cooperative Institute for Modeling the Earth System. “Dr. Manabe's work is a wonderful example of how essentially blue-sky research, decades ago, can provide the foundation for understanding — and, hopefully, solving — existing problems.”

During the question and answer portion, Manabe repeatedly cited the “great fun” to be had in modeling Earth’s climate, and urged students to follow their curiosity and their joy, rather than trying to predict what research may prove impactful in future decades.

“I never imagined that this thing I was beginning to study [would have] such huge consequences,” he said. “I was doing it just because of my curiosity. I really enjoyed studying climate change. Curiosity is the thing which drives all my research activity. It is great fun to use a model to study how climate change over the last 400 million years has evolved.” 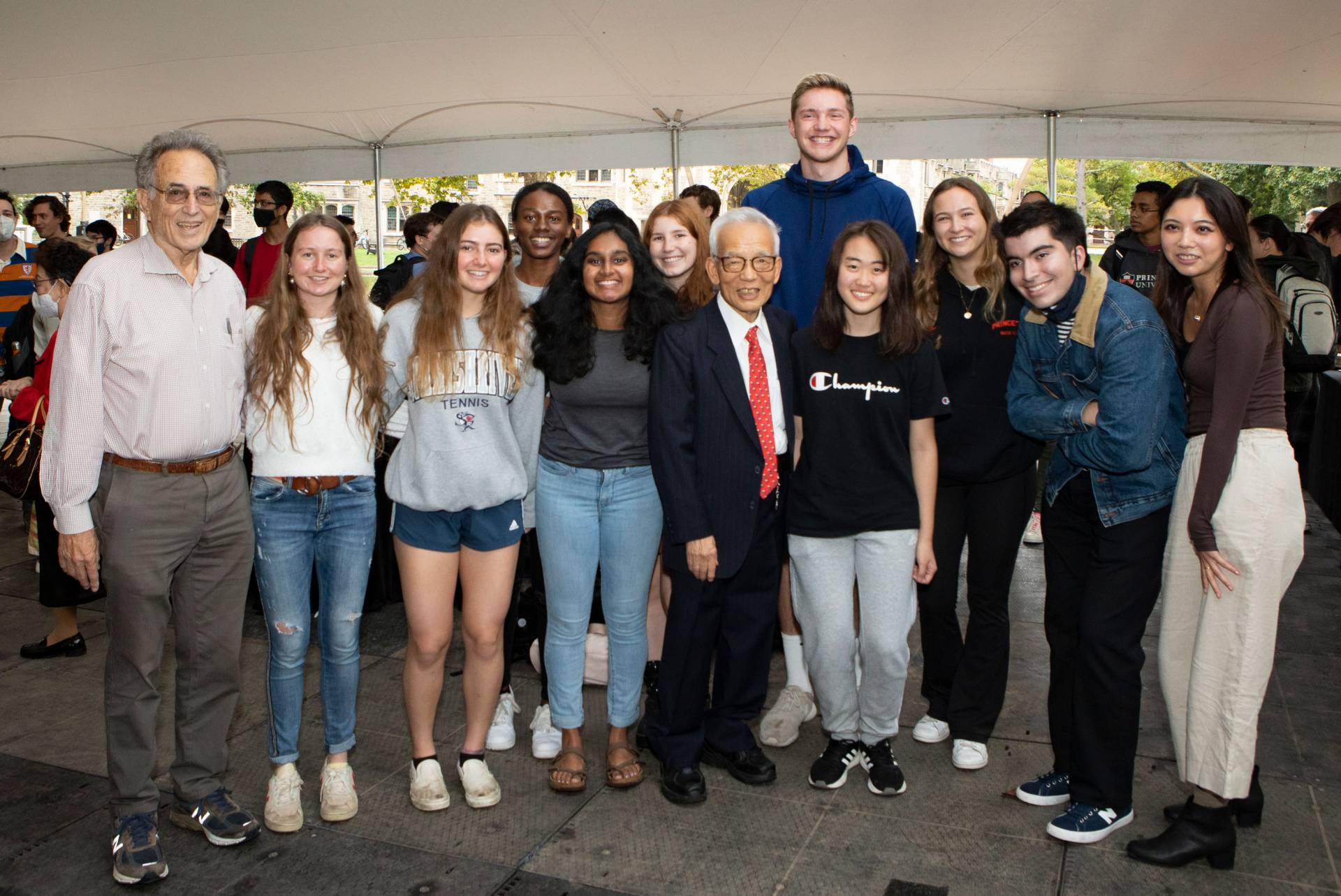 Princeton students in the Freshman Seminar “Time Capsules for Climate Change, to be Opened at Your Reunions,” take a photo with Manabe at an outdoor reception behind Alexander Hall. The freshman seminar is taught by Rob Socolow (far left), professor of mechanical and aerospace engineering, emeritus. Socolow, who has known Manabe for more than 50 years, said: “Suki is such a scientist’s scientist. This is such a winner to have my students meet him!”

Following the press conference, Manabe attended an outdoor reception for members of the University, held in a large tent behind Alexander Hall. After a lively toast by Prentice, Manabe, champagne glass in hand, posed for photos with former laureates, then greeted a long line of undergraduate students, graduate students and faculty colleagues waiting patiently to congratulate him.

“I am really surprised and really excited,” said Jing Feng, a postdoctoral research associate in the Program in Atmospheric and Oceanic Sciences who did her graduate research on Manabe’s 1964 climate model. “To have the Nobel Prize in our field is so important.”

Manabe, who is 90, stayed and greeted everyone who wanted to meet him and have their photo taken, sharing handshakes and hugs.

Abigale Wyatt, a graduate student in geosciences, said she was thrilled to meet Manabe. “I’ve read his papers, gone to his talks. He was already a legend, and now he’s an even bigger legend.”

T. K. Chu, a retired physicist from Princeton Plasma Physics Laboratory, who has known Manabe for more than 50 years, was overcome with emotion as he hugged Manabe tightly for several minutes. “This [prize] was earth-shaking,” he said. “I just feel so happy.”

“It’s great that Princeton is again in the news for making an important contribution in an important field in science,” said Herman Verlinde, the chair of Princeton’s Department of Physics and the Class of 1909 Professor of Physics. “For physics, this is a great day because of the recognition that the methods of physics have impact across many parts of science, including climate science.” 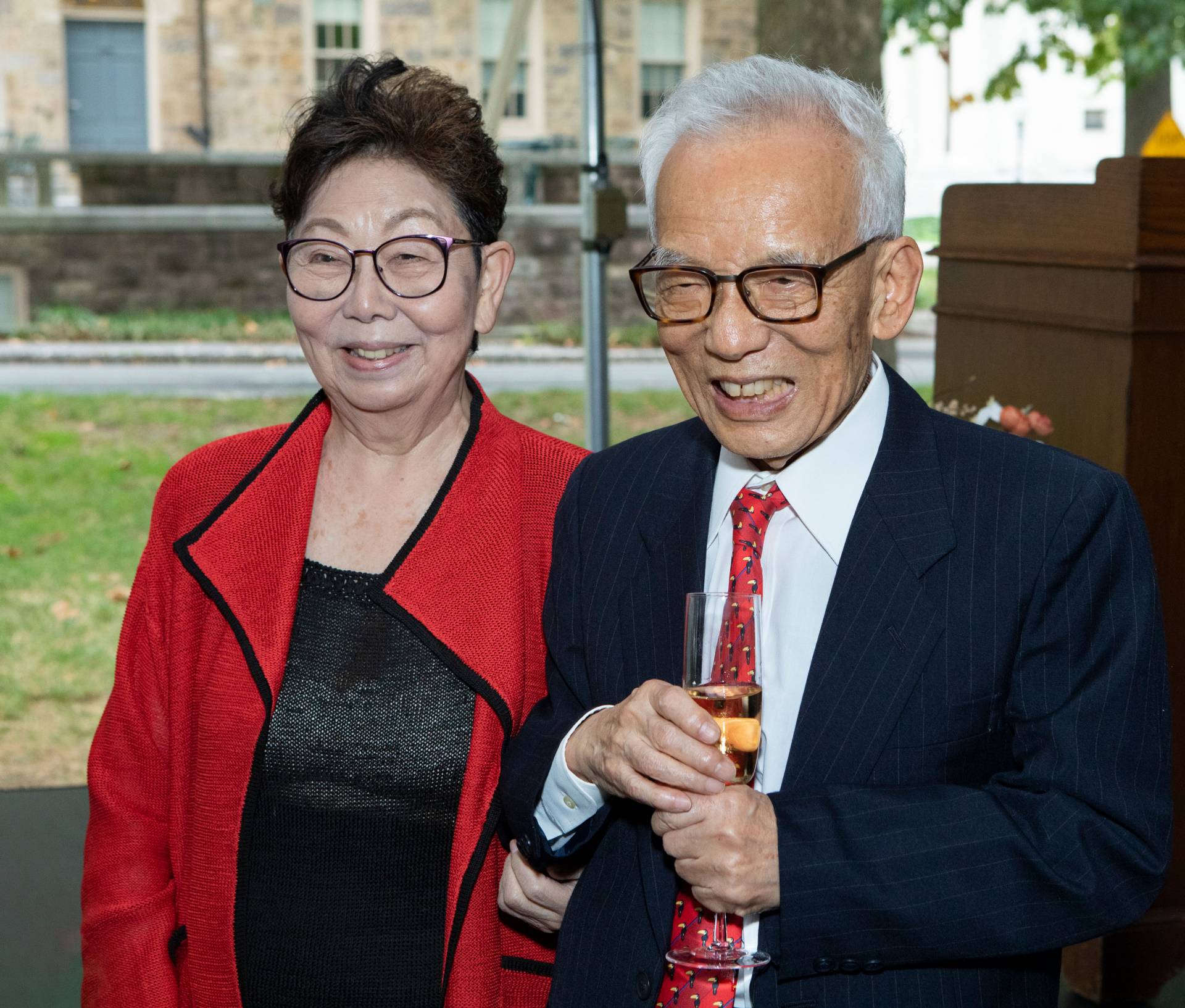