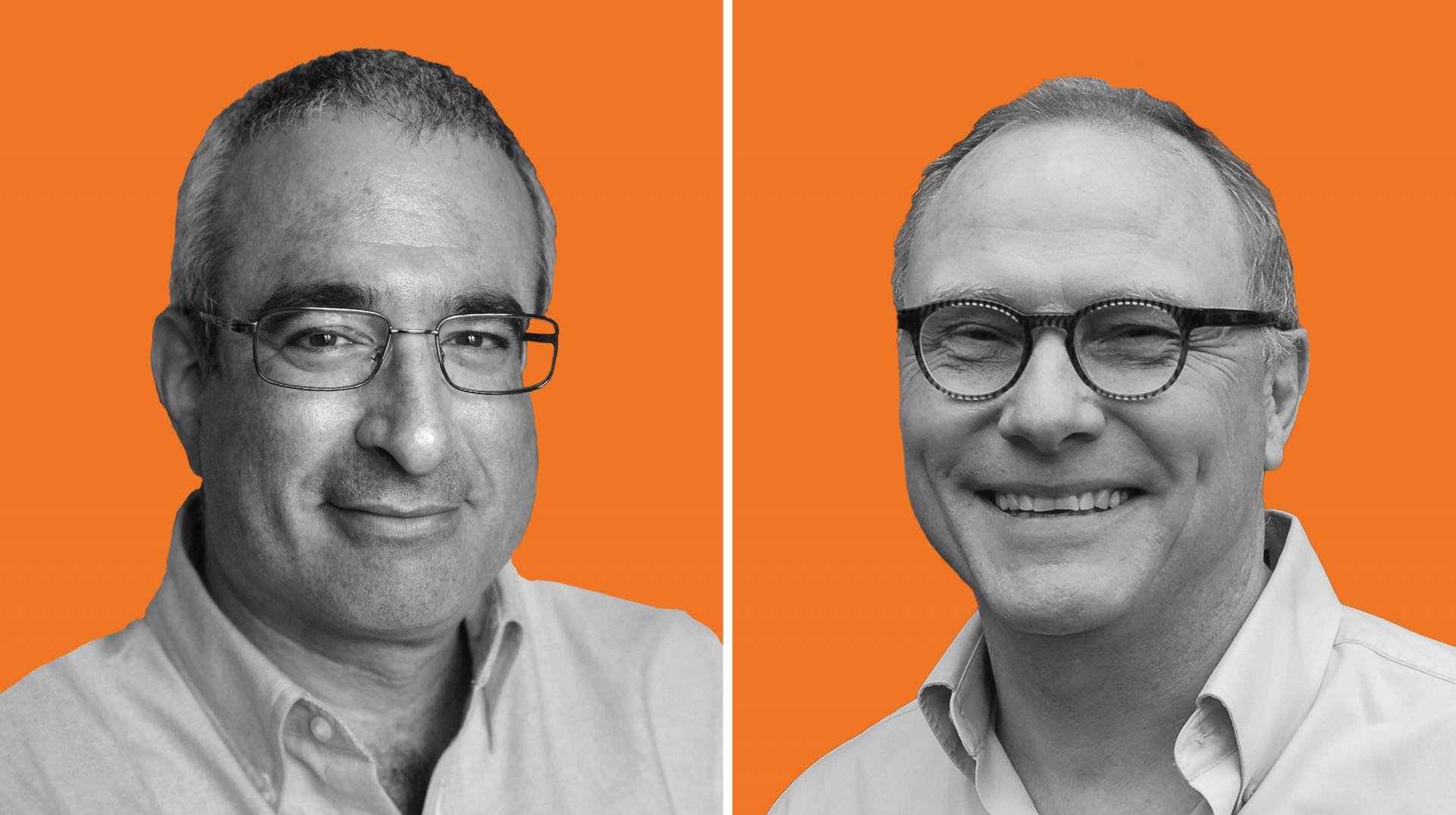 Princeton graduate alumni Joshua Angrist, left, who earned his Ph.D. in economics in 1989, and David Card, right, who finished his Ph.D. in 1983, have been awarded the 2021 Nobel Memorial Prize in economic sciences.

Photos courtesy of the MIT Department of Economics, and by Jean Smith/UC Berkeley

Princeton alumni David Card and Joshua Angrist have been awarded the 2021 Nobel Memorial Prize in economic sciences for providing “new insights about the labor market” and showing “what conclusions about cause and effect can be drawn from natural experiments,” the Royal Swedish Academy of Sciences has announced. The prize amount is 10 million Swedish kroner, or about $1.14 million.

Card, who received his Ph.D. in economics from Princeton in 1983, received one half of the prize “for his empirical contributions to labor economics.” He taught at Princeton from 1983-96 and is currently the Class of 1950 Professor of Economics at the University of California, Berkeley.

Angrist, a 1989 Princeton Ph.D., shares his half of the award with Guido Imbens, The Applied Econometrics Professor and Professor of Economics at the Stanford Graduate School of Business, “for their methodological contributions to the analysis of causal relationships.” Angrist is the Ford Professor of Economics at MIT, a director of MIT’s School Effectiveness and Inequality Initiative and a research associate at the National Bureau of Economic Research.

“This is a great prize: David Card, in joint research with Alan Krueger done here at Princeton, changed the way economists think about the labor market, most prominently about how the minimum wage affects employment,” said Wolfgang Pesendorfer, the Theodore A. Wells ’29 Professor of Economics and chair of the Department of Economics. “Josh Angrist and Guido Imbens made key methodological contributions that changed the way empirical research has been done over the past 25 years.”

In announcing the Nobel Prize in economics, the Nobel Committee said the approach used by Card, Angrist and Imbens — using what are known as natural experiments — has spread to other fields, revolutionizing empirical research.

“Many of the big questions in the social sciences deal with cause and effect,” the Nobel Committee noted in announcing the award today. “How does immigration affect pay and employment levels? How does a longer education affect someone’s future income? These questions are difficult to answer because we have nothing to use as a comparison. We do not know what would have happened if there had been less immigration or if that person had not continued studying. However, this year’s laureates have shown that it is possible to answer these and similar questions using natural experiments. The key is to use situations in which chance events or policy changes result in groups of people being treated differently, in a way that resembles clinical trials in medicine.” 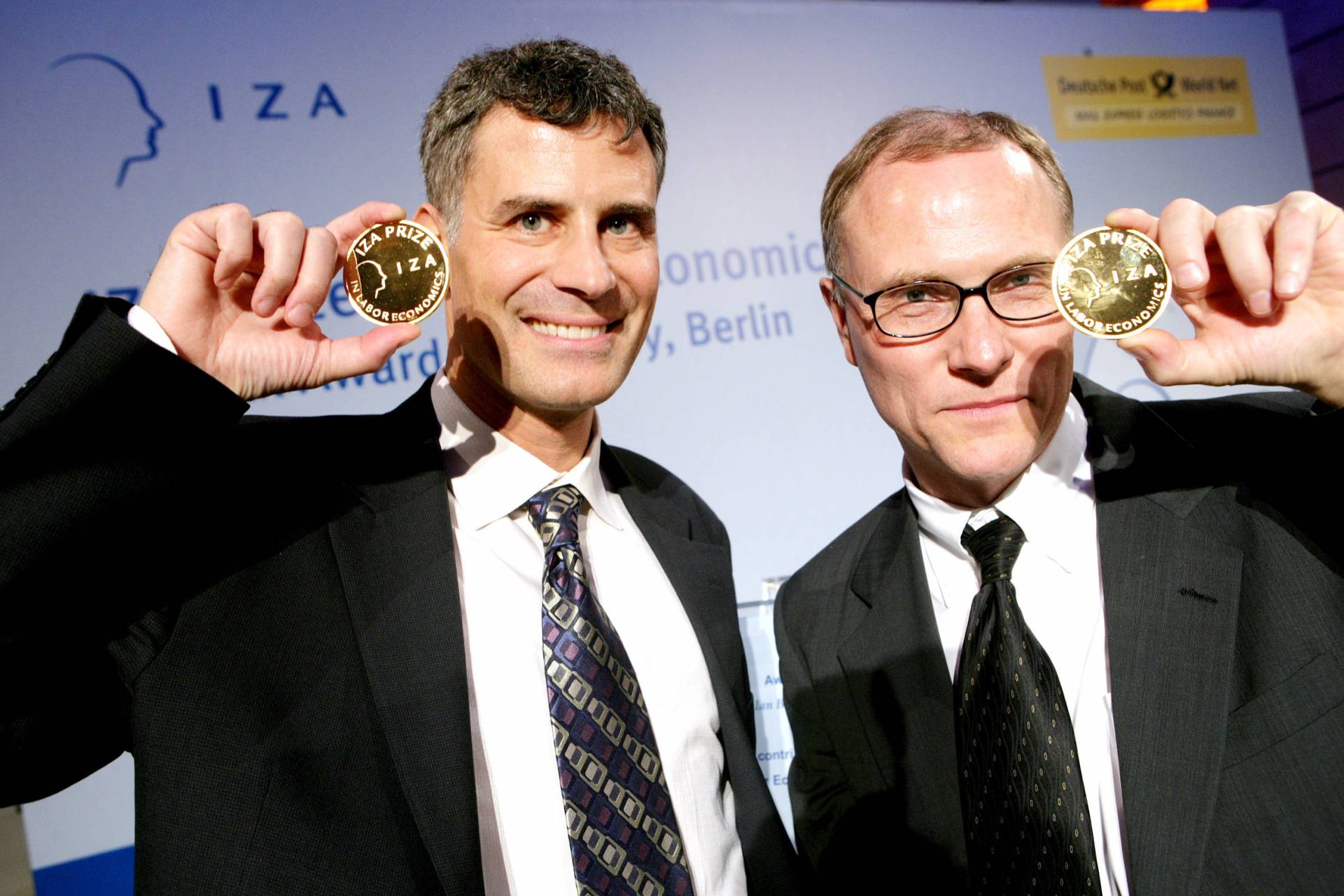 Alan Krueger, left, the James Madison Professor of Political Economy, and Card, right, receive the IZA Labor Economics Award in 2006. Krueger, who made pathbreaking contributions to the analysis of the minimum wage together with Card, died in 2019.

Orley Ashenfelter, the Joseph Douglas Green 1895 Professor of Economics and doctoral adviser to Card and Angrist, said the Nobel recognized “their breathtaking influence on modern empirical research in economics. The Industrial Relations Section is proud to celebrate our alumni and former colleagues and all they’ve done to influence the field and encourage the rise of experiments in economics.”

The news also brought with it some sadness in remembering Krueger, the James Madison Professor of Political Economy, who died in 2019, and his contributions to the work cited in the 2021 Nobel in economics.

“Everybody who mentions [the Nobel Prize] to me in the notes that I have gotten mentions Alan Krueger,” Ashenfelter said. “It was very common in the Industrial Relations Section to have very fine people who collaborated with each other over quite a long period of time.”

Krueger and Card studied the impact of education, training and human capital on earnings, and demonstrated that the quality of schooling has an enormous influence on future income.

They made pathbreaking contributions to the analysis of the minimum wage, showing that moderate increases do not have the destructive impact on employment that many critics fear. They received international attention for their 1994 study comparing fast-food employment in New Jersey and Pennsylvania before and after the New Jersey minimum wage increase.

Krueger was co-author with Card on his book on the minimum wage, “Myth and Measurement: The New Economics of the Minimum Wage,” (Princeton University Press, 1995.) Ashenfelter said Krueger also collaborated with Angrist on several papers, including one that studied the effects of schooling on income using school start date to examine causality.

“Today’s Nobel in economics recognizes that investing in people — such as paying them living wages and providing quality educational opportunities — is beneficial not only to them but to society at large,” said Cecilia Rouse, chair of President Joe Biden’s Council of Economic Advisers and former dean of the Princeton School of Public and International Affairs. “It also highlights how economists can utilize natural experiments to analyze the causal impact of public policy, which has been an important advancement for the profession. Much of this work has its roots at Princeton University, and I am very proud to call the winners my friends and colleagues.”

The Industrial Relations Section at Princeton, which will celebrate its 100th anniversary in 2022, was founded as a clearinghouse for information on employment policies and practices among U.S. corporations. It is known for its contributions to industrial relations and labor economics through high-caliber empirical research, teaching and public policy.

Leah Boustan, professor of economics and director of the Industrial Relations Section, said the 2021 Nobel Prize in economics will increase public appreciation of the work of the Industrial Relations Section since the 1970s, which has led to the widespread use of natural experiments. At the time, poverty was on the rise in the United States and researchers were trying to measure whether government programs had an impact.

“We’re all working in the wake of this groundbreaking way of seeing the world,” Boustan said.

“We’re very proud that two Princeton economics Ph.D. alums were recognized today for their revolutionary contributions to empirical economics,” she continued. “In addition to their contributions to knowledge, both have been advisers to scores of economists, and through the nature of their research and tireless support of students, have served as role models and have inspired a whole generation of scholars. Princeton was especially fortunate that David spent a good part of his career training students at Princeton.”

David Lee, the Chemical Bank Chairman’s Professor of Economics and Public Affairs and a 1999 Princeton Ph.D. in economics, called the laureates’ work “transparently compelling,” and said it inspired many graduate students to adopt their scientific approach to economics.

“I’m absolutely thrilled to see the contributions of David, Josh and Guido recognized for their revolutionary impact on labor economics and empirical economics more generally,” Lee said. “The kinds of questions I have explored in my own research involving natural experiments would not even have been considered without their foundational work.”

Lee said he was especially happy for Card, who was his Ph.D. adviser at Princeton. “Today is not only a celebration of David’s pathbreaking contributions to economic sciences, but also a day to join the cheers around the world from colleagues within the profession, and countless co-authors and former advisees who know from direct experience that his generosity towards and support of the next generation of scholars has been as extraordinary as his individual contributions to knowledge,” Lee said.

Card’s research interests include immigration, wages, education, and gender- and race-related differences in the labor market. He is a former director of the Labor Studies Program at the National Bureau of Economic Research.

In addition to co-authoring “Myth and Measurement” with Krueger, he co-edited “The Handbook of Labor Economics” with Ashenfelter (North Holland, 1999), “Seeking a Premier Economy: The Economic Effects of British Economic Reforms” with Richard Blundell and Richard Freeman (University of Chicago Press, 2004); and “Small Differences that Matter: Labor Markets and Income Maintenance in Canada and the United States” with Freeman (University of Chicago Press, 1992). He has also published over 125 journal articles and book chapters.

Card was co-editor of Econometrica from 1991-95 and of the American Economic Review from 2002-05. He has held visiting appointments at Columbia, Harvard and the Center for Advanced Study in the Behavioral Sciences. In 1995, he received the American Economic Association’s John Bates Clark Prize, which is awarded every other year to the economist under 40 whose work is judged to have made the most significant contribution to the field.

He was a co-recipient with Krueger of the IZA Labor Economics Award in 2006. He also received the BBVA Frontiers of Knowledge Prize in 2015 with Blundell, and he was awarded the Frisch Medal by the Econometric Society in 2007.

Angrist is a dual U.S. and Israeli citizen. His research interests include the economics of education and school reform; social programs and the labor market; the effects of immigration, labor market regulation and institutions; and econometric methods for program and policy evaluation. He previously taught at Harvard and the Hebrew University of Jerusalem.

Angrist is a fellow of the American Academy of Arts and Sciences and the Econometric Society, and he has served on many editorial boards and as a co-editor of the Journal of Labor Economics. He is the co-author with Jörn-Steffen Pischke of “Mostly Harmless Econometrics: An Empiricist's Companion” (2009) and “Mastering 'Metrics: The Path from Cause to Effect,” (2015) both published by Princeton University Press.

Angrist and Card join a number of other Princeton faculty and alumni who have been awarded Nobel Prizes.