MacMillan’s message about the redemptive mission of science and of “listening to yourself” was heard by nearly 50 young scientists, ages 16 to 20, who tuned in to the one-hour lecture from besieged cities across Ukraine. 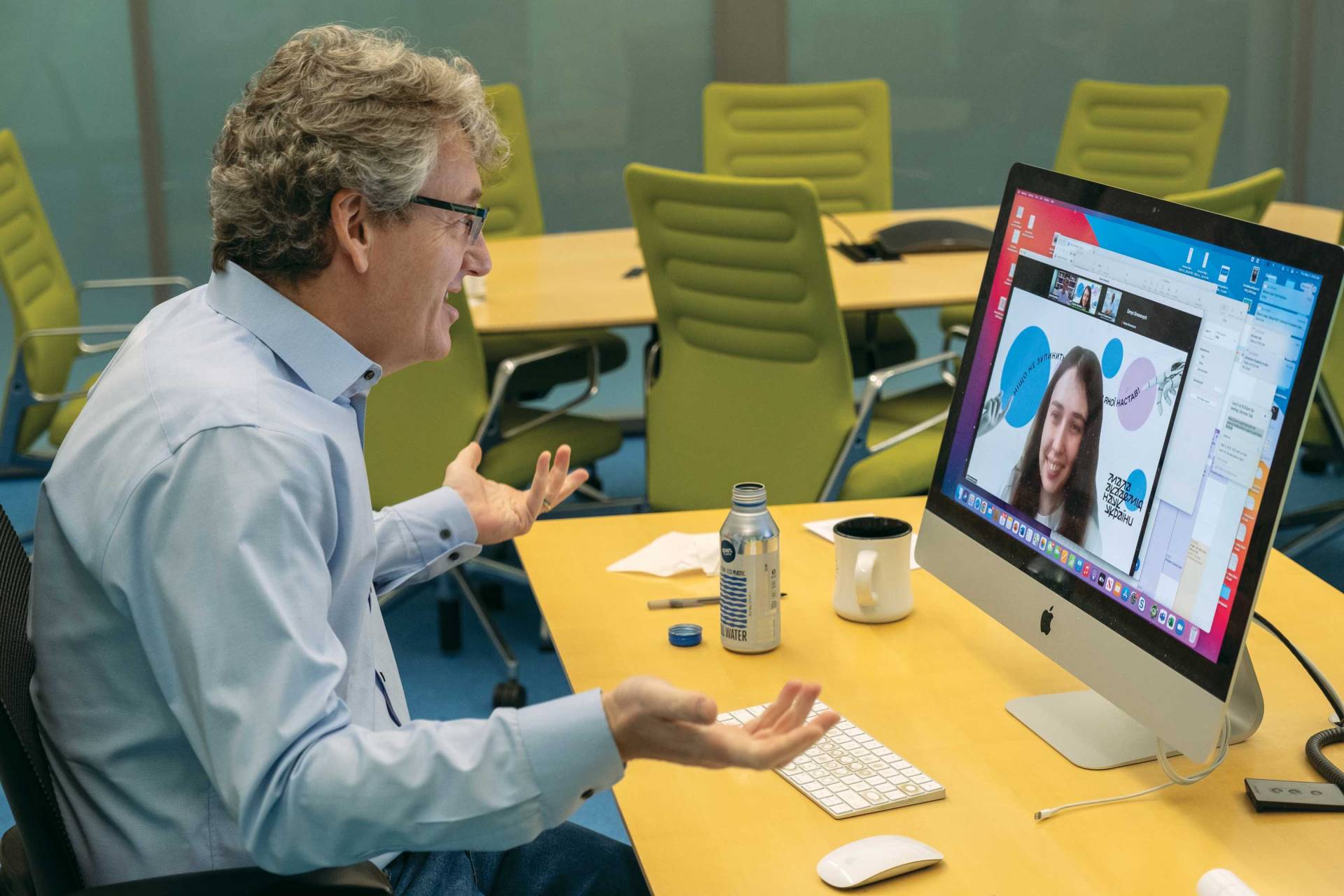 Dave MacMillan, a 2021 Nobel Prize laureate in chemistry, gave a virtual lecture Thursday from Princeton for students in Ukraine. Shown on screen is Valeria Yatsenko from the UNESCO Centre Junior Academy of Science of Ukraine, which has lined up Nobel Prize winners in a project to help students maintain school routines during the war.

The lecture was hosted by the UNESCO Centre Junior Academy of Sciences of Ukraine. The Centre was created in Kyiv in 1963 to support the scientific development of students.

After listening to the story behind his 2021 Nobel Prize in Chemistry, students asked MacMillan questions through a translator that revealed an “awe-inspiring” commitment to the subject at hand, he said.

A half-hour primer on asymmetric organocatalysis gave way to numerous science-oriented questions: “What is the role of catalysis in medicine?” “Is it possible to do an asymmetric inhibitor?” and “What is your current research project?”

All student cameras were shielded during the Zoom talk and screens showed black for security purposes. Students’ names ran across the top of the display field, offering a small window into the people listening in: Olena, Denys, Anica, Sophia.

The numbers of student attendees also shifted often as individuals joined, dropped off, and then rejoined again through patchy internet connections.

These were the only signs that the audience was in any way out-of-the-ordinary.

Saying it was difficult at times to maintain his composure, MacMillan spoke candidly about the joys and challenges of science as he sought to inspire students to preserve their ambitions amid harrowing conditions.

He opened his talk by telling them, “You have the support of the whole world.”

MacMillan is one of 11 Nobel laureates to speak through the Centre so far in 2022. Dozens more are lined up through the rest of the year.

“It was tough. It felt like the most important talk I’ve ever given,” said MacMillan, the James S. McDonnell Distinguished University Professor of Chemistry.

“I wanted to express to these kids what we feel for them. But I also wanted them to think about their futures and this idea that science and engineering can give them a great horizon for the things they want to do.”

MacMillan was invited to speak by Oksana Markarova, the Ukrainian ambassador to the United States, after he and more than 100 Nobel Laureates and scientists published a declaration in March through the Lindau Nobel Laureate Meetings protesting Russia's invasion of Ukraine.

In her invitation, Markarova said her government is seeking ways to help students cope with stress, continue their educations, and support the country’s intellectual assets. One way to do that, she noted, are these online talks, which are organized under the Centre’s Lectures of the Future initiative.

The initiative began in 2017, and many scientists have participated in lectures since then. But the Russian invasion in February has intensified educators’ resolve to maintain at least some level of regular learning among its students.

One Centre organizer, Valeria Yatsenko, who hosted the program from an undisclosed location in Poland, said they often receive messages of thanks and requests for more lectures from students in Kharkiv, Bucha, Kruvyi Rig, Mykolaiv, Odesa, and even Mariopul.

“Nowadays, this project obtains a dramatic urgency,” said Yatsenko via email. “Full-scale Russian aggression has stopped the educational process in Ukraine and disturbed almost all possibilities for youth to learn, research, investigate, create, or even live.

“This program is probably the only bridge connecting Ukrainian school students with the world science community.”

The Q&A portion of the lecture was cut short by the host, as the number of questions exceeded the allotted time. In one final question, a student referred to MacMillan’s comment about the number of graduate schools he contacted in America (19) versus the number that replied to him (one). “How,” the student asked through a translator, “did you not give up?”

“So you just have to set those feelings aside and go and try to do what you want. And my experience is that once you try, those things are a hundred times easier than you thought they were going to be.”

MacMillan’s talk is expected to be published in Ukrainian on the Lectures of the Future website this weekend.