This past January, Derek Ahneman, a graduate student in the lab of Abigail Doyle, a Princeton University associate professor of chemistry, began work on an ambitious new project: he proposed the merger of two areas of research to enable a powerful reaction that neither could broadly achieve on its own.

One field, which is the Doyle research group's domain, was nickel catalysis, wherein nickel squeezes in and out of chemical bonds to bring molecules together. The other field was photoredox catalysis, which uses light to initiate a series of unique bond-breaking and bond-making events one electron at a time. This type of catalysis is the research focus of David MacMillan, the James S. McDonnell Distinguished University Professor of Chemistry and department chair at Princeton, whose laboratory is a leader in the field and happens to occupy the same floor at the Frick Chemistry Laboratory.

"We tried it, got a hit and ran down the hallway to talk with Dave," Doyle said. It turns out MacMillan's lab had come up with a very similar idea and had also gotten initial results, so at that point a natural collaboration emerged, she said.

Jointly reported June 5 in the journal Science, the reaction presented a direct bond between traditionally unreactive coupling partners, a difficult connection to make up to this point. This bond formation provides an excellent shortcut for chemists as they construct and test thousands of molecules to find new drugs.

MacMillan likened their discovery to finding a trapdoor that led to a basement full of gold. "You still have to figure out how to get all the gold out of the basement, but it's a great thing that you found the trapdoor," he said. 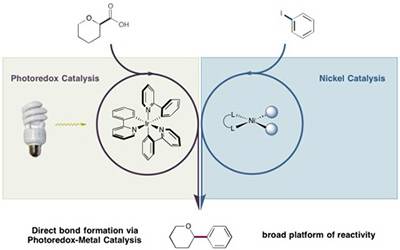 Princeton University researchers merged two powerful areas of research to enable an unprecedented chemical reaction that neither could broadly achieve on its own. The resulting bond formation could provide an excellent shortcut for chemists as they construct and test thousands of molecules to find new drugs. In the transformation, a carboxylic acid (left) reacts with an aryl halide (right) in the presence of tiny amounts of an iridium photocatalyst and a nickel catalyst to form a direct and unique bond between two highly prevalent classes of molecules. (Image courtesy of Science/AAAS)

The reaction was made possible by the labs' two different catalysts, which are small molecules that react to form the desired bonds then return to their original form and repeat the process. Exposing the photoredox catalyst developed in the MacMillan lab to light-emitting diodes (LEDs) or even household light bulbs provides enough energy to make them extraordinarily reactive. These catalysts become destabilized and can add or remove an electron from another molecule that goes on to form new bonds.

"Chemists are starting to appreciate this field because it allows you to do things that were effectively impossible," MacMillan said.

The nickel catalyst that has been extensively studied by the Doyle lab is well known for its low cost and ability to selectively couple certain molecules. Nickel catalysis has become an important part of the chemist's tool kit because of the predictability of these methods, Ahneman said.

In the reaction reported in Science, the photoredox catalyst transformed a carboxylic acid — a simple and abundant carbon-based compound found in numerous materials such as soap and steroids — into a very reactive site on the molecule. That site was then intercepted by the nickel catalyst and coupled to an arene, which is a ring-shaped molecule that is frequently present in potential drug candidates. The end result was a bond neither catalyst could efficiently construct by itself.

"I think it's remarkable that you can have two catalysts in the reaction, both performing the roles that they're best at and yet are still compatible with one another," Doyle said.

The researchers also demonstrated the unprecedented coupling between an arene and dimethylaniline, a compound that lacks the carboxylic acid group. This result opens the door to bond formations created directly from typically unreactive carbon-hydrogen bonds, further freeing chemists to build useful molecules.

"What we found really powerful about this work is not just the combination of photoredox and nickel catalysis to accomplish one particular reaction, but that it enables a whole platform of new reactions," said Jack Terrett, a graduate student in the MacMillan lab and co-author on the article.

In exploring the scope of the reaction, the researchers were impressed by both catalysts' ability to perform consistently regardless of the presence of a wide range of groups. Within a couple of weeks the research teams had used their reaction to make more than two-dozen products in high yields.

"It was through our discussions that we were able to make this happen so fast," said Zhiwei Zuo, a postdoctoral researcher in the MacMillan lab and lead author on the paper. By sharing their expertise, the researchers were able to gain insight into the mechanism allowing them to quickly progress the project.

Moving forward, the two labs plan to stay in close contact but develop the chemistry independently, allowing them to cover more ground.